Roadside Report: High speed race chasing, VIP access, Flanders Strongmen, crazy bike fans and some Belgian beer added up to a Tour of Flanders 2014 experience that Lee Rodgers will never forget. Ride along with Lee and the Velo Classic Tour group roadside at the mighty Ronde.

What a weekend. Speechless, it left me – well almost.

As if riding the Flanders 140km sportif on Saturday in pristine weather with 16,000 other bike-crazed nutcases wasn’t enough, today we were treated to a high speed chase across the Flandrian countryside in search of one of the greatest races on earth, fueled by roadside beers, sugary waffles and enough adrenaline to drop an elephant.

To top it all off, the Tour of Flanders and Fabian Cancellara and co. provided us with one of the best Classics I’ve seen to date. 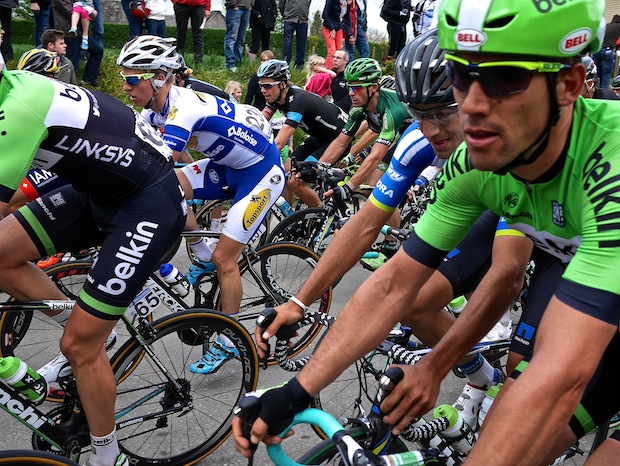 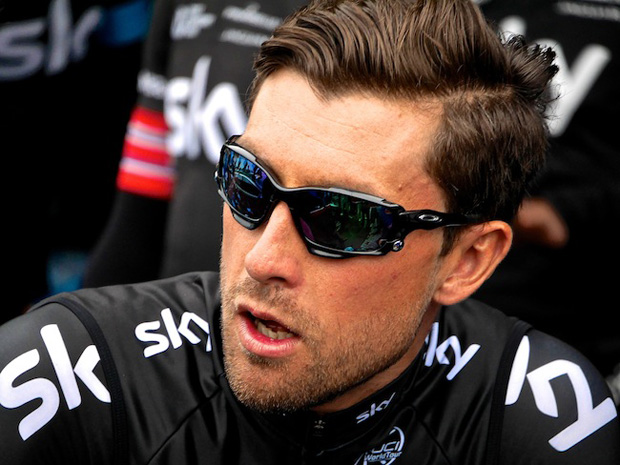 Bernie Eisel is not only a very funny and approachable guy, he also has the best hair in bike racing, full stop. I realized this as our day following the Tour of Flanders bike race with Velo Classic Tours began as VIP guests at the start area where all the team vehicles and riders gather for the start of this hugely important Classic. 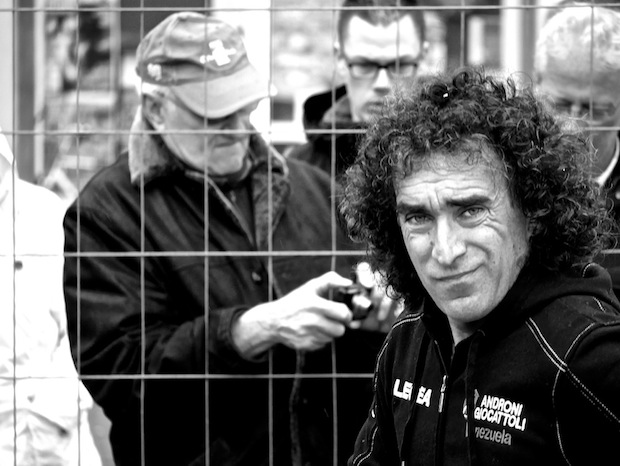 And more bike hair from the Androni Giocattoli mechanic

Legs slightly achy from the day before, we all set off in search of the stars and their bikes. About half the team buses were parked up in the ancient square in the center of Brugges, with the other half rolling in and heading to their allotted spaces with a balletic precision.

The biggest hullabaloo was at the OmegaPharma-QuickStep bus, with a massive throng of people lined up to catch a glimpse of the great man a good 45 minutes before the signing on time.

Those without the magic VIP wristbands looked on through the wire fencing that separated them from us as though refugees glimpsing a promised land they would never be granted an entry to. 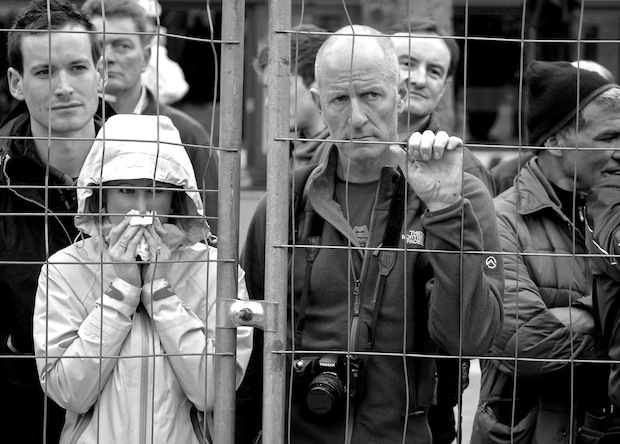 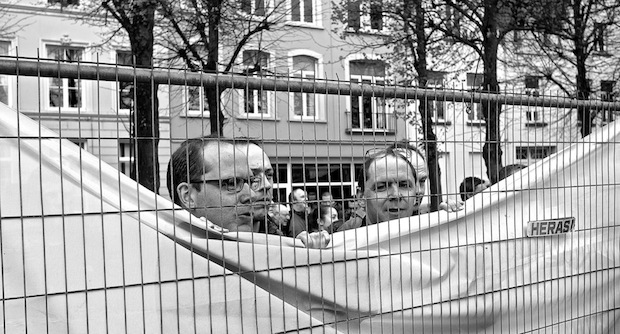 The other big attraction was the Trek coach, but even Fabian Cancellara comes second to old Tommeke in these parts. The Cannondale area attracted a good few wild-eyed spectators awaiting the new pretender to the throne, Peter Sagan. 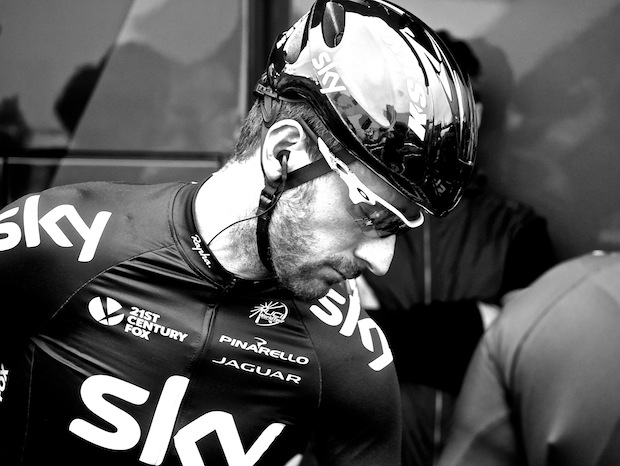 Meanwhile over at Sky, there was about ten Rapha-clad English blokes hanging about to catch a glimpse of El Wiggo. Similarly, I saw John Degenkolb get out of the Giant-Shimano bus to get something out of the trunk of the team car, which no one but me seemed to notice. 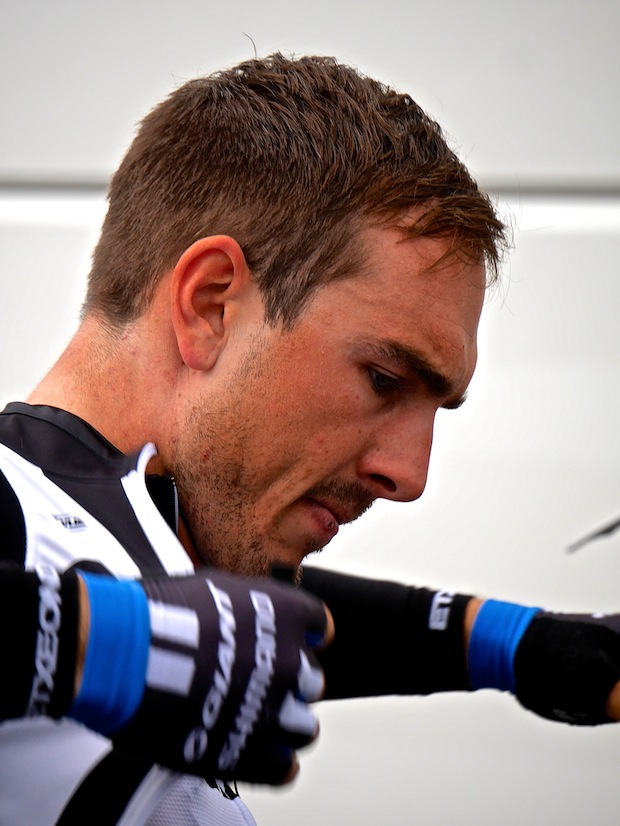 Now, Wiggins and Degenkolb are pretty handy bike riders. One just won a classic last week and the other had an incredible season not too long ago, but around these parts, adulation has to be earned over the years.

These locals know bike racing like no other people on earth and though they may respect a rider who has a win or three under his belt, love in these parts is not given away skittishly.

Boonen, you see, and Cancellara, will never die. They are immortals, they have joined that league by dint of what they have done year after year after year, in the biggest, hardest races in the world – namely, Flanders and Roubaix.

In Wiggo’s case it probably doesn’t help that just about everyone attached to the team looks like they’re in a band, with the Sky photographer in particular doing a very good impression of Paul Weller.

In Mod We Trust indeed. 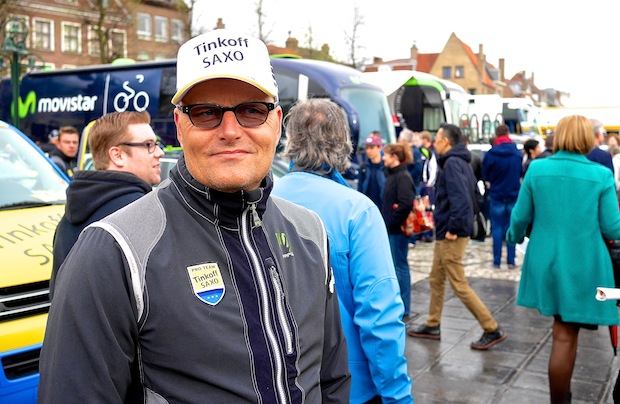 Other notables were Bjarne Riis looking rather miserable, Van Summeren’s ridiculously high seat post, and the sheer frission of excitement in the crowd that was tempered by the steely focus that defined every single rider’s eyes. 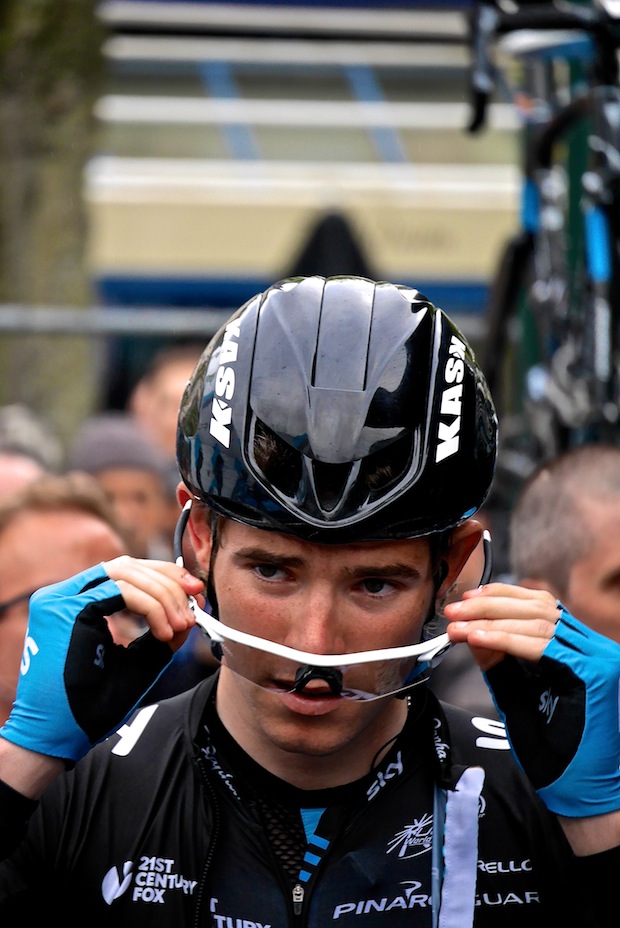 Whether chinwagging with corporate sponsors or having photos with kids, you could see that these guys were in the zone.

They were, in many a sense, about to go to war and they knew that they would face their fears very soon.

Back to the Velo Classic van for the 9:55am depart to the first roadside stop to see the women’s race, I asked around the van what they thought of hanging out in the VIP area.

“I’ve watched so many races on tv,” said Lisa Roberts of the USA, “and see folk on the route hanging from the windows and there they are, right next to the action. I’ve always been really envious of that and wanted to do that today, from the hotel window, and I did!

“It was awesome in every way… except I didn’t have a beer!”

Mrs. Roberts may be American but she is quite clearly a Flandrian at heart.

Dan Kelly from Australia spoke about the many children there in the enclosure. 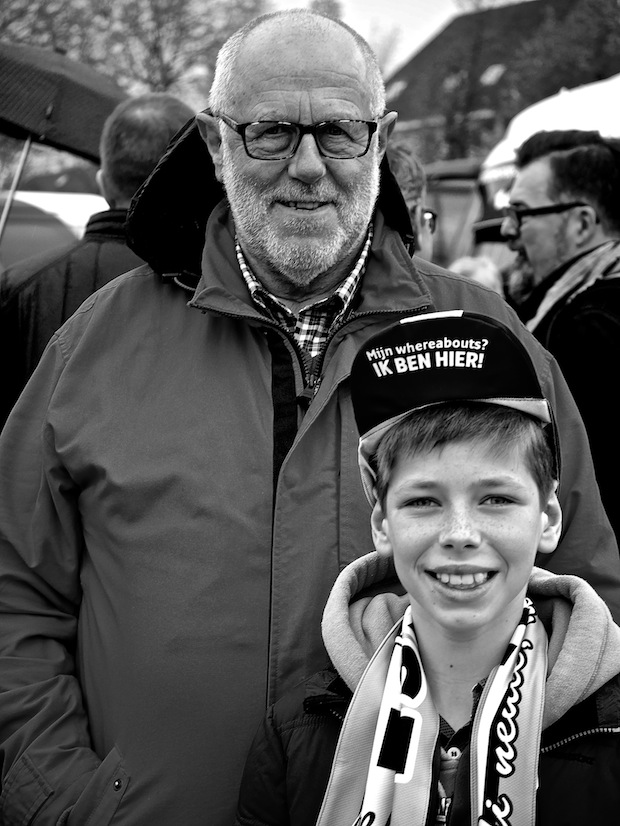 “The little kids getting their photos taken and being besides themselves with excitement, that was really fantastic,” he said. 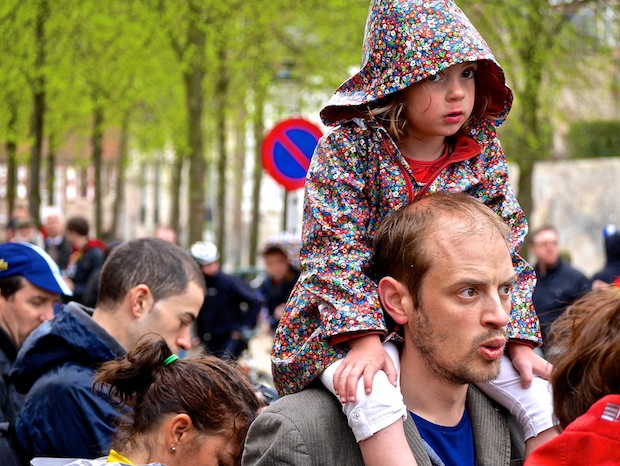 After that we were on the road, with a very distinct excitement and many a giggle running around the confines of our van as everyone giddily reeled off the names of who they’d seen and what tech stuff had been on show.

Roaring over the rolling landscape you got the feeling that we were out on safari hunting down some rare breed of animal, ready to leap from the vehicle to position ourselves for the perfect shot.

It was, I tell ya, a hell of a lot of fun – and the day had barely started.

First stop was on the top of a small berg to catch the women’s race speeding by. I just about managed to spot my friend Tiffany Cromwell of Specialized LuluLemon and give her a shout (she later confirmed she didn’t hear a thing, typical!), then we were haring back to the van to go catch our first look proper of the men’s race. 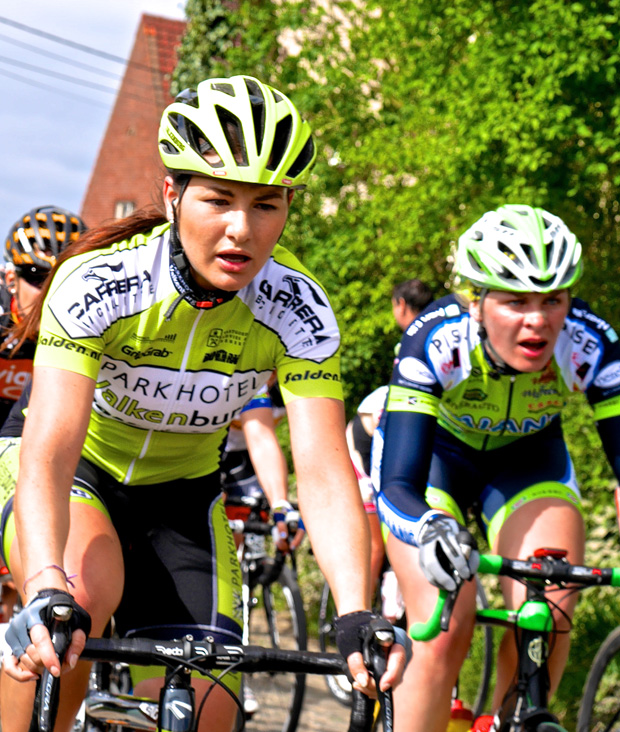 Thanks to the wonders of modern technology, word was buzzing amongst the Velo Classic Tour clientele that Taylor Phinney was off up the road in a four-man break and had 4 minutes.

Strolling down to the Eikenberg I met up with a fine Belgian gent by the name of Heindrichs Etienne, who told me he lived 3km away and came to watch all the Northern Classics with his two pals every year. He was a wealth of information and regaled me with tales of his years on the ‘bergs watching the greats toil up them. 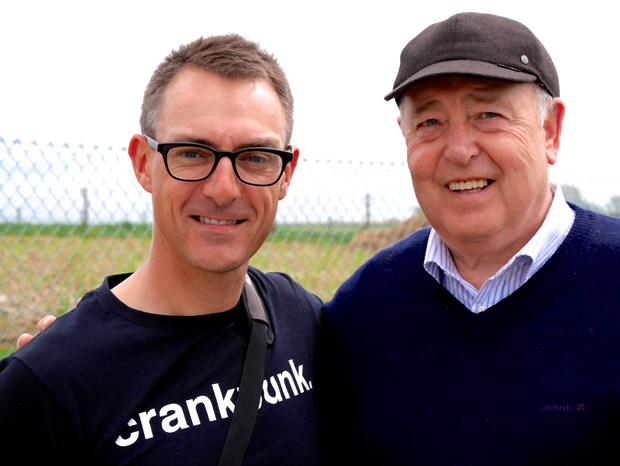 The overwhelming thing about being at these races is the atmosphere, hands down. It’s part carnival, part Coliseum but all imbued with a really great sense of humour and a deep and very affectionate love of bicycles and bike racing.

You can talk about the chapel on the hill at the Kappelmuur or about the iconic climbs in the Tour, but the real shrine to this sport and the gladiators who suffer for our entertainment lives in the crowds that come every year to celebrate and express that devotion.

It brought a tear to my eye more than once today, that realization, I don’t mind telling you.

I met up with one bunch of lads from the North of England who had come over before to watch the race, and I asked them why they made the long trip. 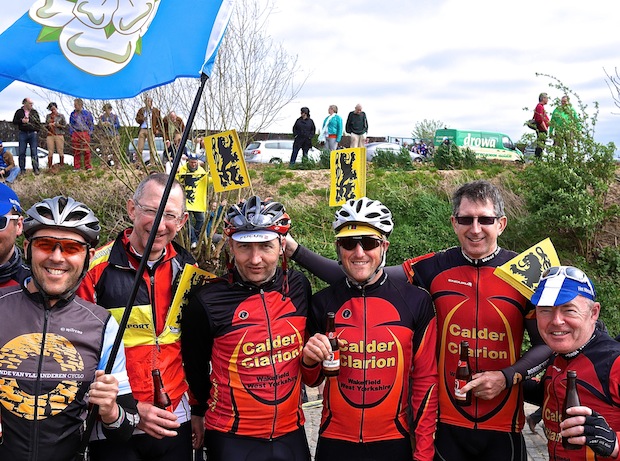 “Atmosphere!” said one fellow, and they all cheered to that. They were all a little looser for the lubricant they’d been downing, and in good nature were cheering anyone who slipped down the opposite bank in the vain search for the perfect vantage point. 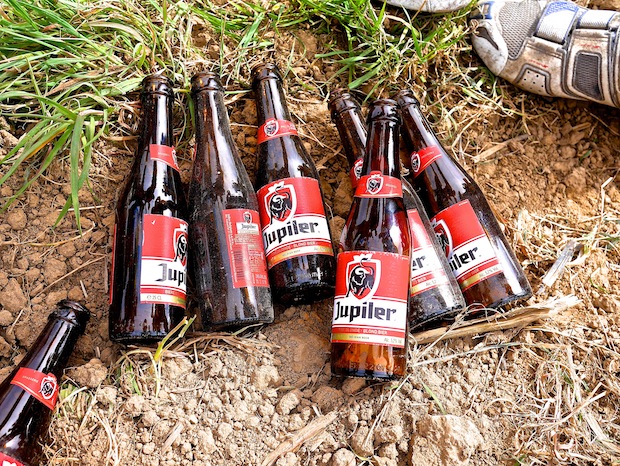 “Cancellara,” came the reply from most.

“Hang on, you lot are English! What about Wiggins?”

Another treat was the young family, the man wearing a Molteni top, the wife a Bic top that complimented her baby bump, and their little son who mustn’t have been more than three, clad in polkadots. 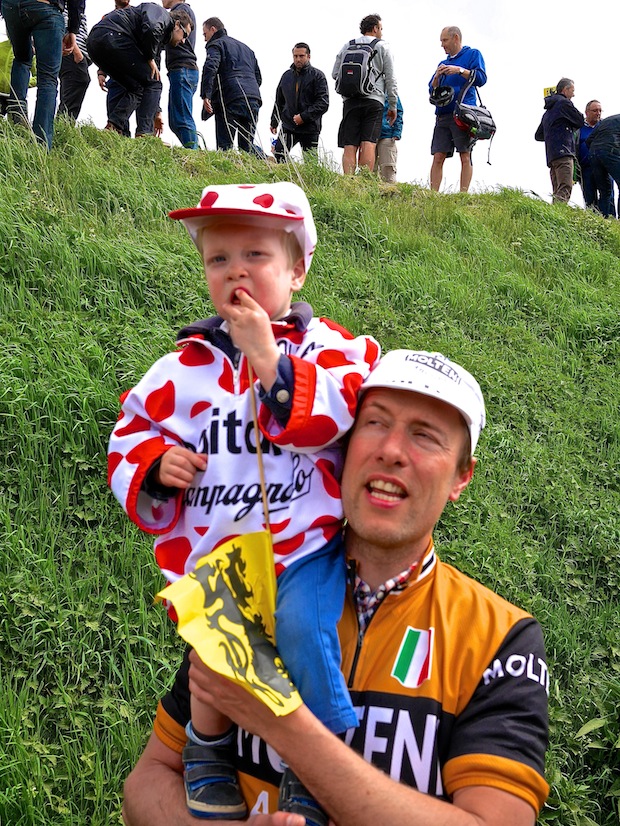 They start them young here for sure. In other parts of the world mothers may play Chinese language tapes or Schubert to the infant in their womb – here, they take them to the Tour of Flanders. 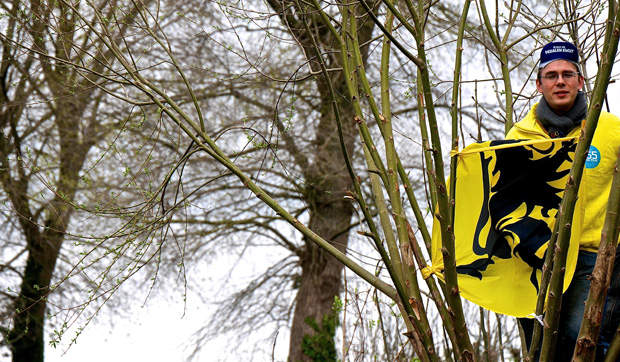 The break finally arrived, after the brass band had strolled down the hill playing some lively ditty and the weird guy on the tiny bike had done a couple of drive-bys to amused cheers.

And then there they were. Phinney at the front, putting in a huge effort, the others hanging on to his wake. The roar from the crowd was intense and incredibly moving, brief as it was, and then we were all engulfed in the dust from the procession of motos and support bikes that came haring by.

Then came the peloton, another roar summoned from the guts of 3,000, and then in another instant we were racing back to the van to get to the third point on the itinerary.

Perched on a corner before a cobbled section I got some great shots, but the true way to enjoy this event is to not have any camera at all. So I just sat it down and watched, and smiled.

Then smiled some more.

We watched the end of the race at a little café where Peter had arranged lunch for us all, Le Petit Cochon, and there, with three free complimentary beers each courtesy of ‘Pete Bucks’, we ate and watched the finale of one of the best Classics I’ve seen in a long time. 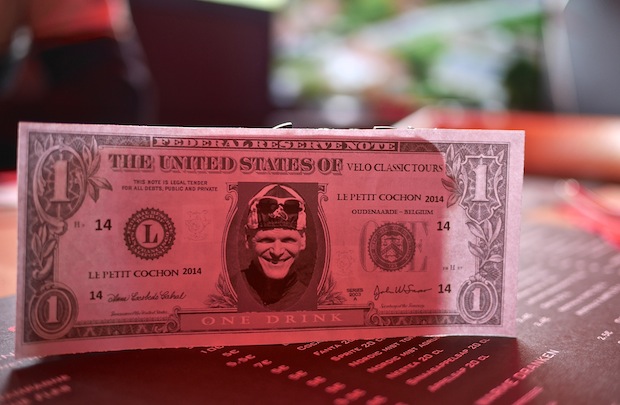 We were, almost to a man, cheering on Van Avermaet, but if he keeps riding so bravely/naively (delete as you see fit) I doubt he will ever win the classic he so covets.

There was one moment that summed up the whole day for me, for all of us really, and the sheer fun of being here on this trip. 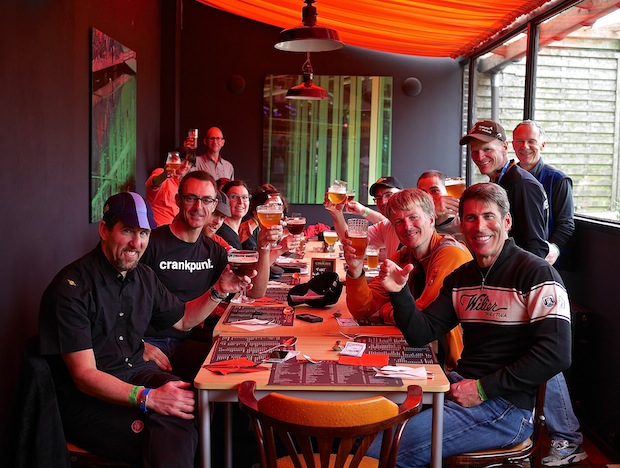 I turned to one guy and said, pointing to the TV, “Is it windy?”

He looked at me and was about to speak when he stopped, turned to look out the window, and said:

I’d kinda forgotten I was in Belgium. Watching the Tour of Flanders. A race I’d just glimpsed live. In Belgium!

The perfect end to a perfect Flandrian weekend…