Even for long time roadside aficionados, finding your way through thousands of fans trying to see the tour of Flanders as many times as possible can be a challenge. My first time chasing de Ronde didn’t go exactly as planned, but that adventure made a great day, and some pretty cool photos too…

There’s no question that Tour of Flanders ranks right at the top of the best races I cycle sport – with many people ranking it above even Paris-Roubaix. It deserves all the attention it gets for its immeasurable brutality, 250km length, 17 very tough climbs, and history going back 98 editions. 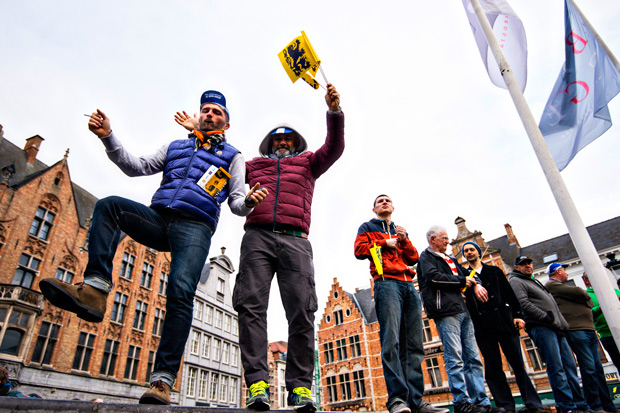 The fans are up and dancing early even though the weather had turned.

The climbs are not long, most of them around a km in length, but what makes writers’ pens scribble are the cobbles and the narrowness. For a slightly different take on these climbs, I videoed this descent of the famous Koppenberg. Shot the day before the race as the last riders of the Tour of Flanders sportive made their ascent you can visibly see and almost feel the severity of the cobbles.

The was the start of a two day trip to photograph the race, but how could I pass the opportunity to climb one of cycling’s most iconic hills?

I invited my friend David to join as driver, a role he happily agreed to. I don’t think I have ever beaten him up a climb before and, bearing in mind that just 3 days before I had been bed ridden with illness and was still suffering from a chest infection that caused me to be sick during the 15 mile flat warm up, I asked him to wait for me at the top.

After a quick photo at the base, we set off together. Taking it easy to start we rode side by side and the knocking from a missing ball-bearing in his bottom bracket was all we could hear. We rode in silence digesting internally the torture of the climb which would manifest itself in just a few seconds. As the road narrowed and steepened we felt our hearts accelerate and our lungs start to ask for more oxygen than we could provide. Through my breathing, I could no longer hear David – had I dropped him? Had he suffered a mechanical? I was not going to look back, instead opting to dig to the depths of my being to get to the summit. I only weaved once across the road… My rear wheel lost traction a number of times but not as many as David who later told me that he had come to a virtual standstill and the only reason he could continue was due to a push from an elderly man walking up the hill. It’s said that if you do have to stop on the steepest section it is game over and a walk ensues. 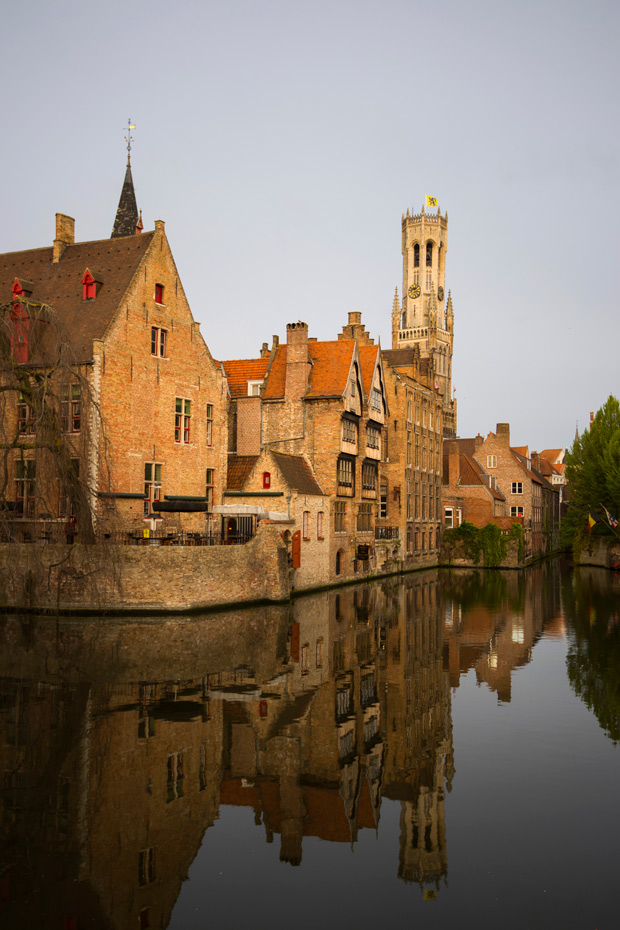 Brugge first thing in the morning

Race Day
The morning of the race we parked in our allocated press car park and made way to the media tent for a lovely breakfast. The day was beautiful with early morning sunshine casting over Brugge. We knew it would not last though.

The city square was totally rammed with people eager to catch a glimpse of their heroes. Armed with Flemish flags, lubricated with Belgium beer and excitement flowing it was a party at 08:00, a full hour before the riders signing on and another before the actual start. It was wonderful to see so many kids there proving the history and importance of the sport in the country is still very much alive and will be for generations to come (so refreshing with the dominance of Soccer in Europe). 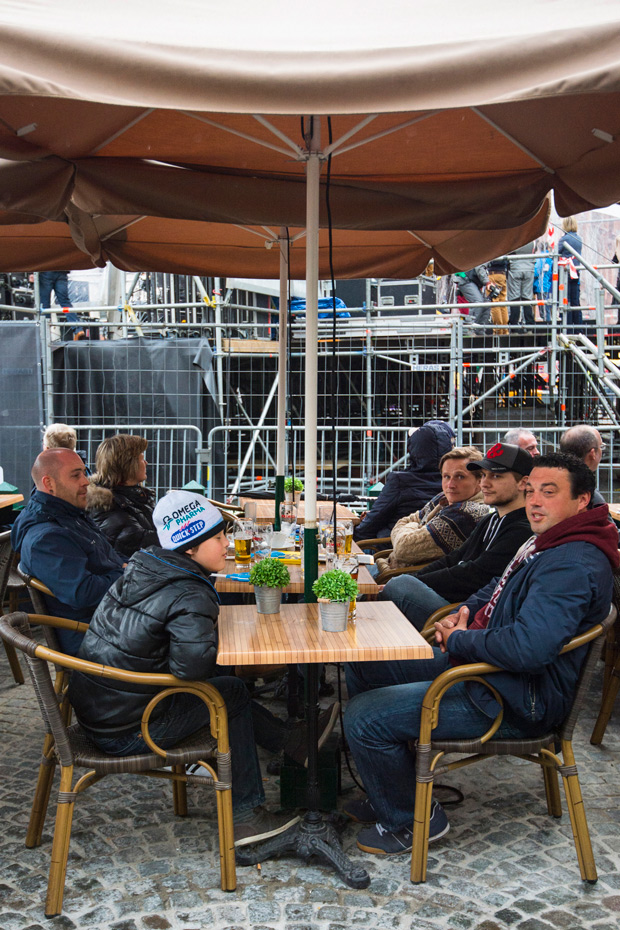 Having access to the stage area it would have been rude not to have ventured up and seen the full extent of the crowds and the local band playing which I presumed to be traditional Flemish folk music. 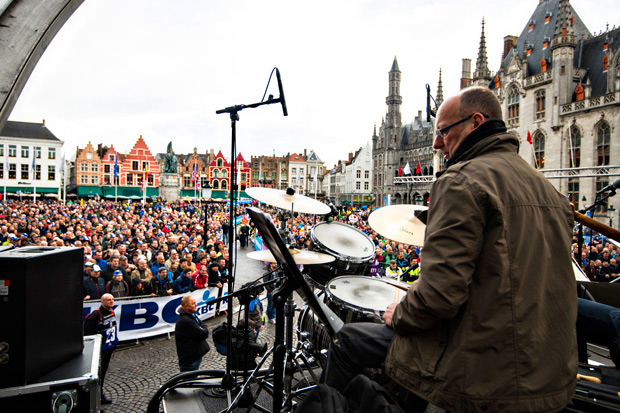 Looking down on the amassed crowds from the stage.

The teams and individual riders soon took to the stage, and from my vantage point in front I knew all the riders would pass within 50cm of me. I was struck by how new everyone’s shoes looked. 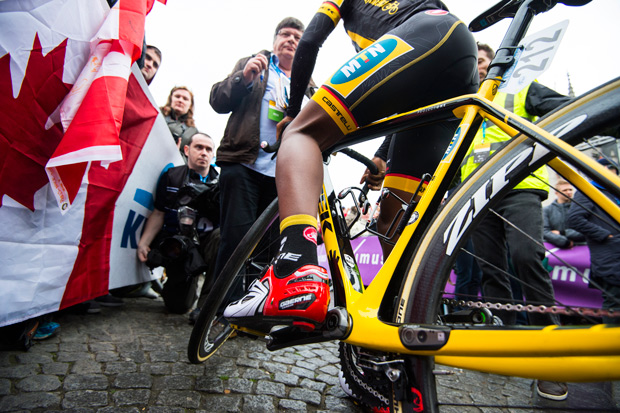 New shoes seemed to be the order of the day. A Canadian fan collects autographs from as many riders as she can.

The fans went wild for the riders as they got interviewed – but a shame I could not understand a word apart from Taylor Phinney and Wiggo. Phinney remarked that the scene was incredible and the Belgium equivalent of the Superbowl and Wiggo was pretty much his normal self, not giving too much away except that he was there to ride for Geraint Thomas. 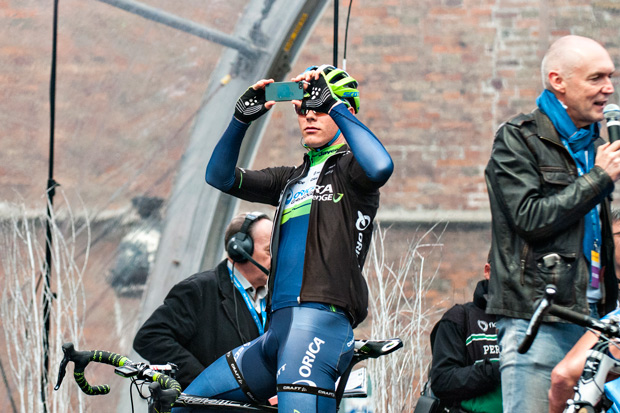 This is a big occasion even for the riders. Here one is seen taking a photo of the crowds unsure if he will ever race this monument again. 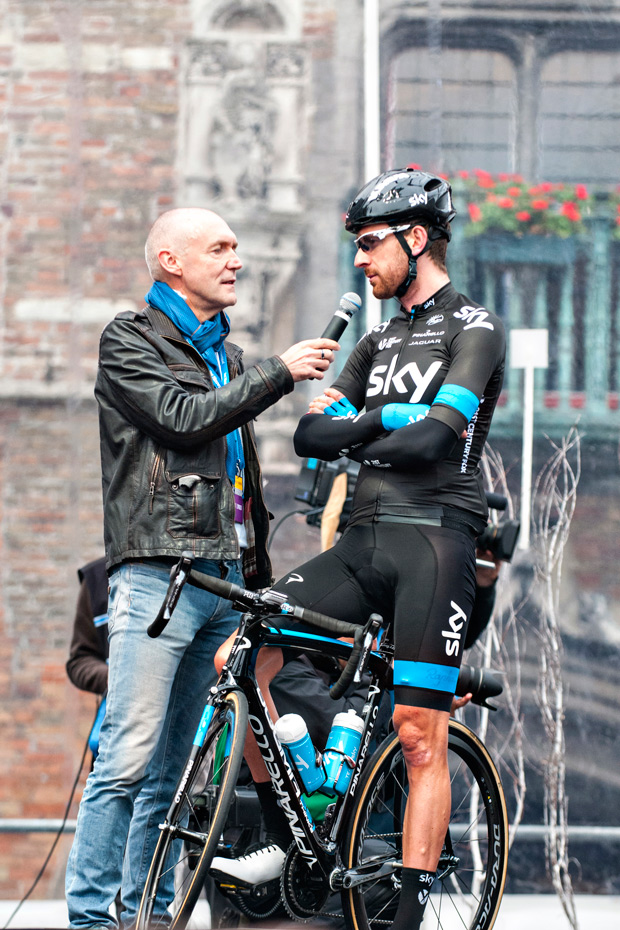 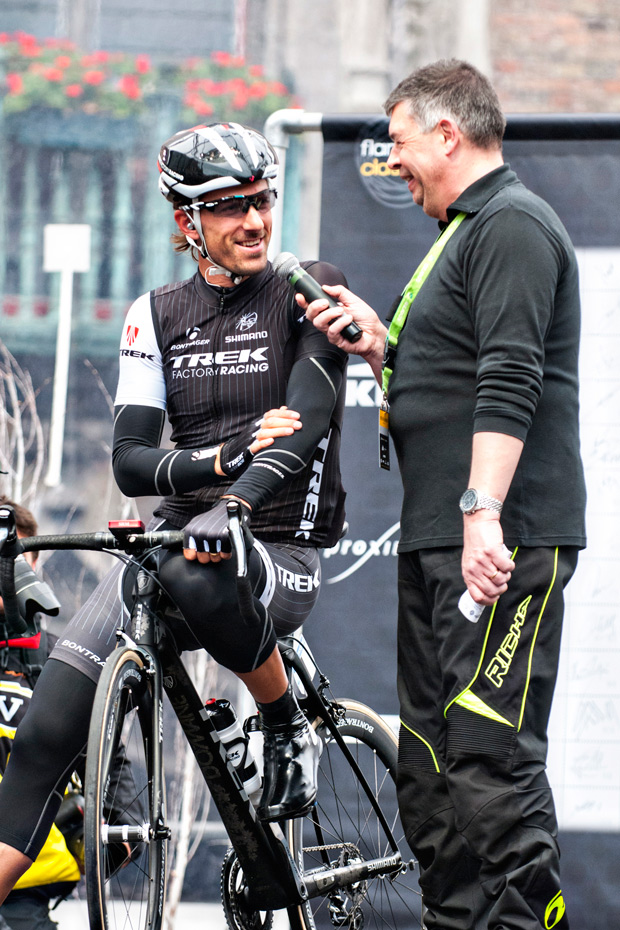 Once all the riders have signed on they assemble in a funnel waiting for the soft start to get underway. 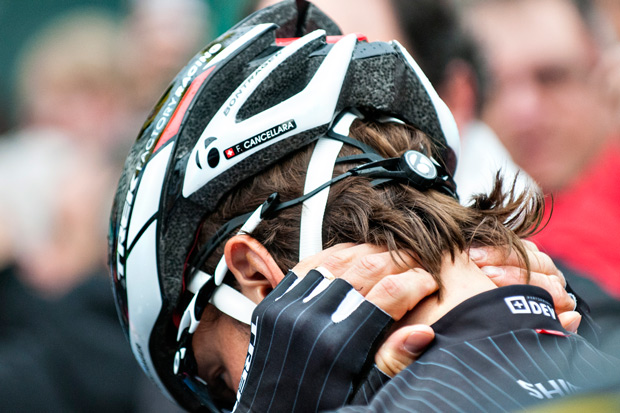 Logistics of chasing this race is a challenge, even for veterans, but more so for first timers like us. Traffic out of the city was heavy and making our way to the first of our chosen spots to watch and photograph the race proved impossible as we would have missed the race passing. On to Plan B.

Knowing that the Koppenberg was going to be wall to wall with spectators we headed towards the Oude de Kwaremont which we’d scoped as much more accessible. With just 5 minutes to go according to the SatNav we came to a standstill in traffic once again. It progressed slowly towards a roundabout where our Press Sticker prompted the police to remove a barrier and allow us access onto the course in the direction of the race. Knowing that this was going away from our chosen location we parked up and started the 30 minute walk to the Oude de Kwaremont chatting to fellow fans on the way and passing through a beer tent or two where we witnessed kids on oversized race bikes emulating their heroes. 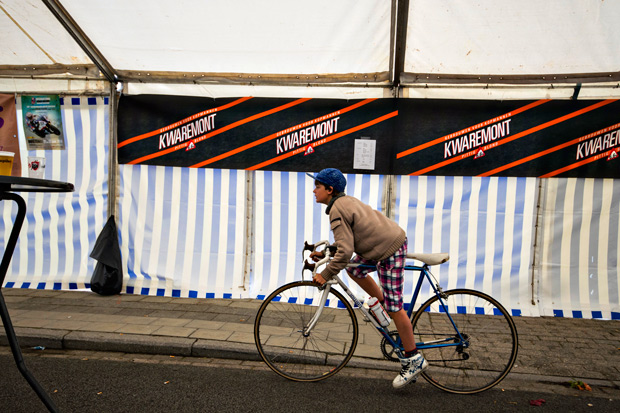 A kid racing through the beer tent before it got busy.

Upon reaching the Oude de Kwaremont it was like a festival taking place with gallons of beer being consumed along with hotdogs, burgers as everybody watched the race on the large outside TV screen. Sorely tempted to partake we had to move through to gain the best vantage point we could find. Again our press access granted special privilege and we were able to find a recess on the road side of the barriers to shoot from. After our walk it was time to get out the camera and start taking shots of the spectators who were in jubilant form, no doubt having been drinking for many hours and already having seen the riders go past once. 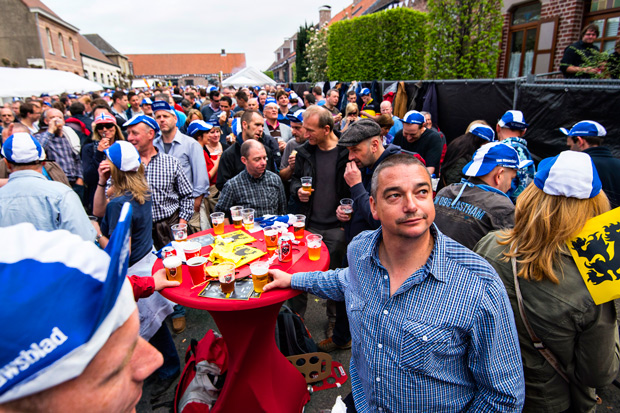 You can hardly move for people around the large outside TV screen and bar. 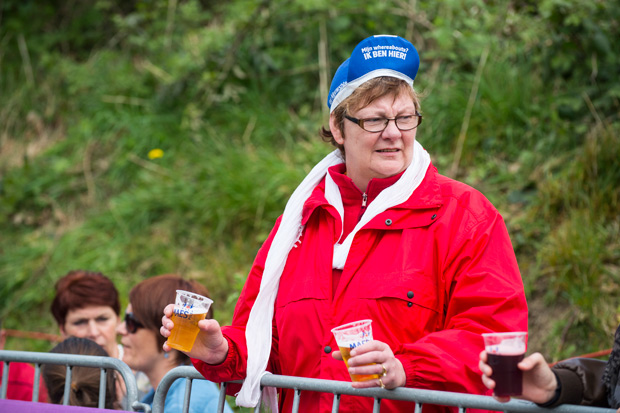 The beer flows to the side of the course as well. 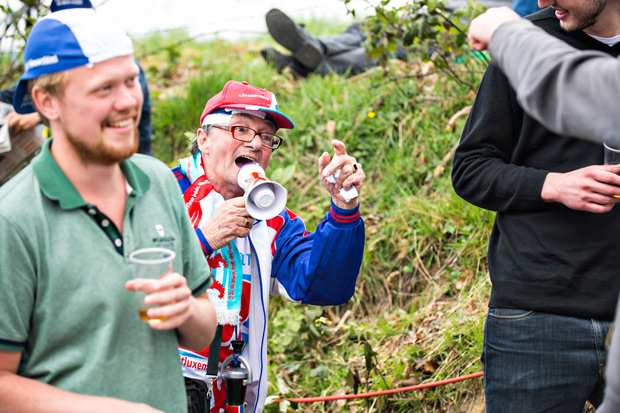 I have no idea what he was saying but he and everyone around had a great time.

The women’s race runs on a slightly different route but passed through around 1 hour ahead of the men. It is a shame the TV rights are sold separately as I would have loved to watch the hilights as it looked a really good race with the absence of Marianne Vos and her dominance. 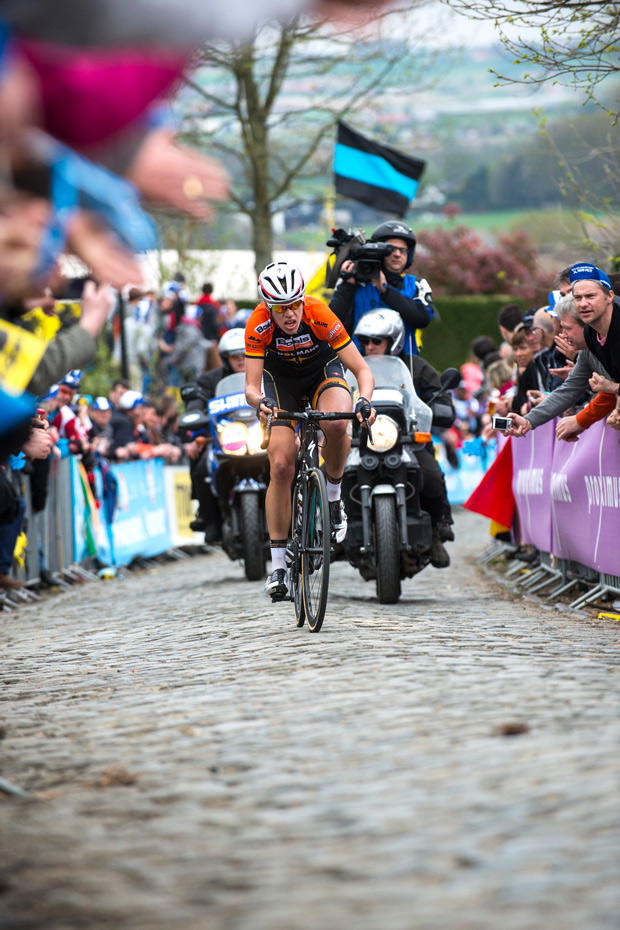 Ellen van Dijk (Boels Dolmans) in a dominant position at the front of the women’s race. She went on to win. 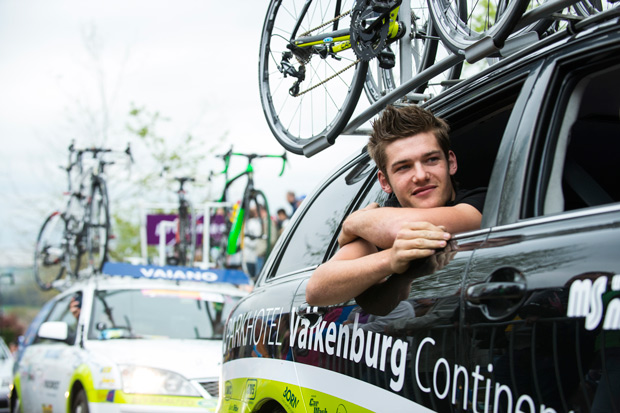 The caravan at the front of both races carries VIP’s, fans and team staff all eager to watch and often catch the action on their cell phones.

You know when the race is approaching by the buzz of the helicopters overhead as they circle. At this moment it’s time to check the lighting, reconfirm the angles you want to shoot from, your camera settings and then prepare yourself. A number of spectators had gathered around us before the police moved them behind the barriers and zip-tied them in. A clear view ensued. The race passes by in a flash even on such testing hills. To be so up close provides an incredible perspective as you can almost hear the riders panting for air. 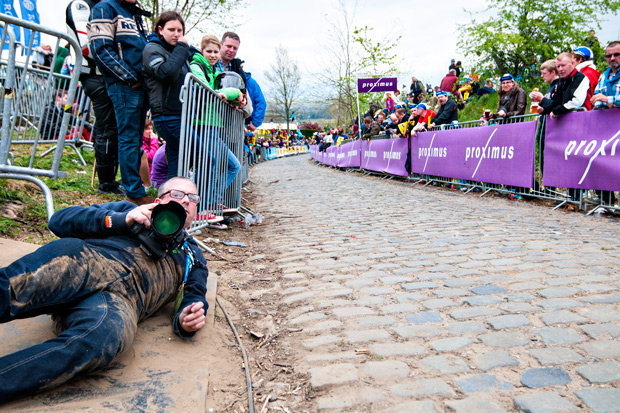 Me in the recess checking out shooting angles prior to the race passing through. The fence would later be locked shut by the police leaving me and David unobstructed to shoot the race.

The following images show the pain and hurt on the riders faces. 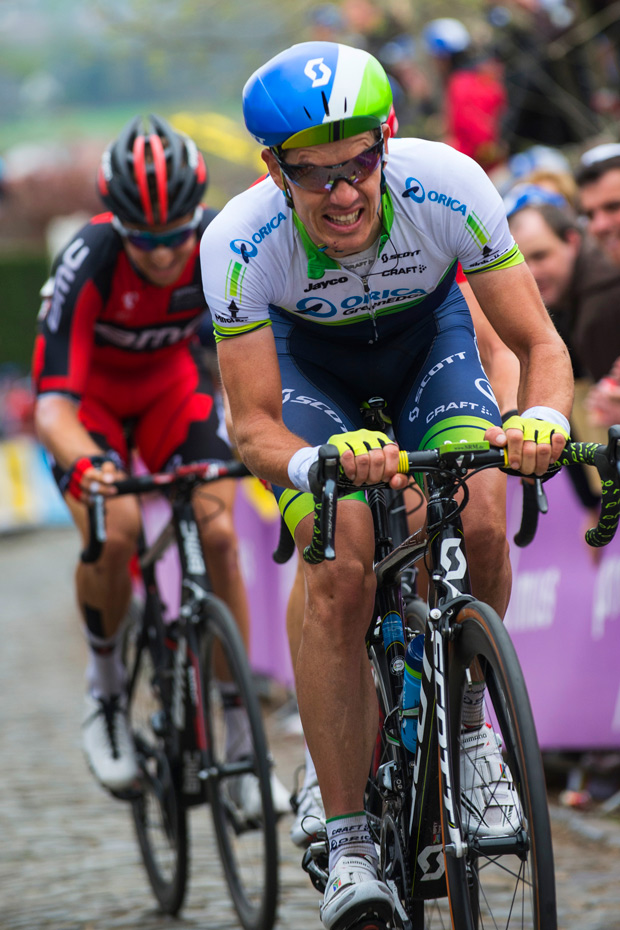 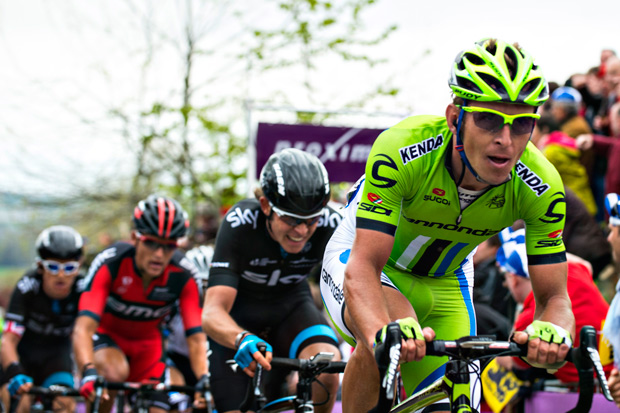 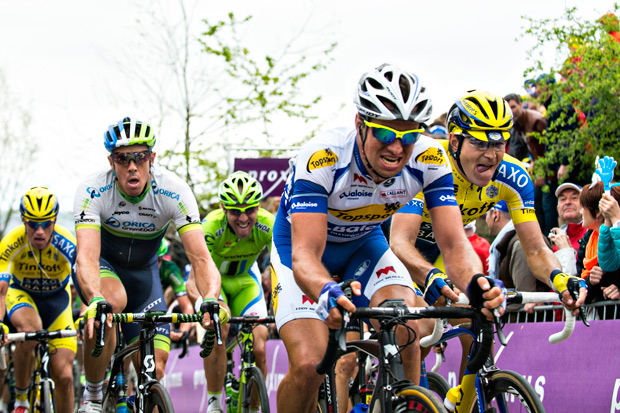 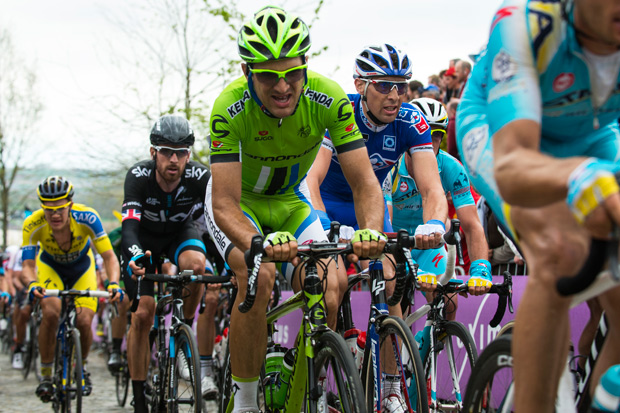 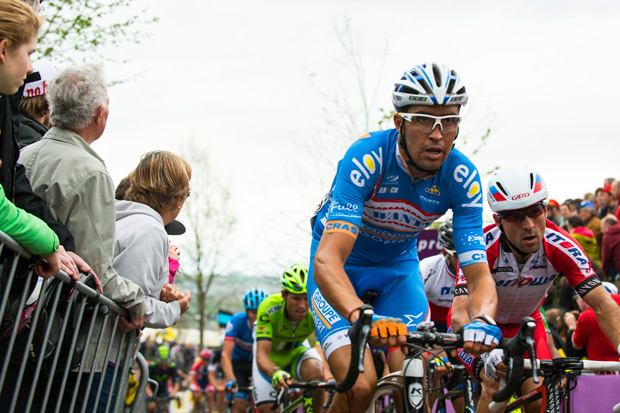 The race passed by in a flash so we made our move to get to the finish with the riders having just 50km to go. Sadly it was not too be. Once we had got back to the car and headed towards Oudenaarde we could not make it due to the traffic restrictions. We did not mind too much though – we had ridden the Koppenberg and watched one of the World’s greatest one day classics. 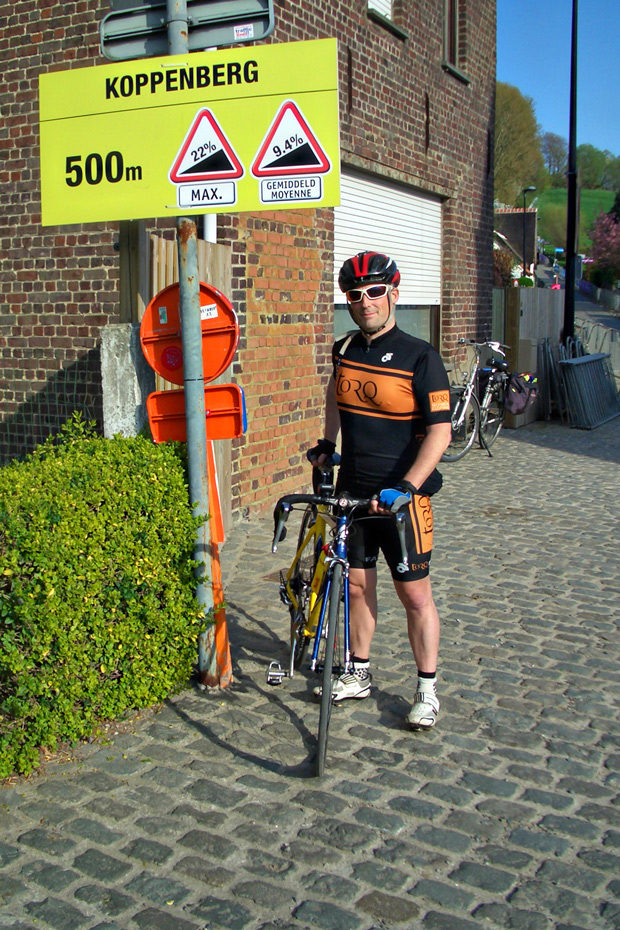 Myself under the sign for the Koppenberg. Note the 22% max gradient and 9.4% average. I was pleased with my 4:03 considering my less than 100% health.