Forget Shaq or Tiger…I’ll Back George!!

As a top sports star, growing popularity comes with a few good performances. But one misplaced comment can knock you of the top faster than you can say Milli Vanilli. Riders like George Hincapie are using their celeb status to support causes far more important than cycling, and inadvertently growing their popularity the old fashioned way – fan at a time…

This is a letter to George Hincapie from 12 year old Stratford Helms, who lives with juvenile diabetes, and recently had the chance to ride a few miles with the US Postal star, and shows just how powerful winning over “one fan at a time” can be…

My name is Stradford Helms, and I am 12 years old. I live in Greenville, South Carolina. I am writing to tell you about something that happened to me this week that was really cool. I call it a “Picture Day”. Not the kind where your mom dresses you up on Easter and takes pictures of you to give to relatives who go on and on about how cute you are. Or the kind that you have at school in second grade where you later look and say “What was I thinking?” This is the kind where you have the greatest day, and every time you think about it, you can remember every detail perfectly. The colors, the sounds, the feelings. That’s the kind of “picture day” I had. 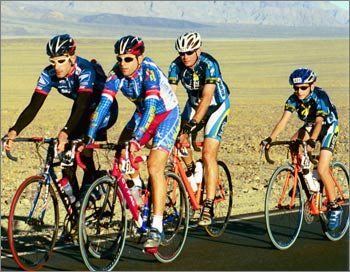 The first “picture day” I wanted to tell you about was five years ago. I went to school and my mom and dad picked me up to take me to the doctor. They did a few tests at the office and then I was in the Children’s Hospital in Greenville. I was diagnosed with a disease called Juvenile Diabetes. I found out that my body had attacked my pancreas and it did not make insulin anymore. They said I would have to take shots and check my blood sugars five to eight times a day. It was a lot to learn in one day. My dad is also a Type 1 diabetic so we had less to learn than most families. My mom worked in Internal Medicine so it was really pretty easy to handle. It has been five years and I have done over 5,000 insulin shots and checked my blood sugars 10,000 times. I now have an insulin pump that gives my body insulin 24 hours a day. In my county there are 5 kids a week diagnosed with my disease and 1 in 200 kids will be diagnosed with Juvenile Diabetes in South Carolina. Diabetes is not fun, but sometimes it does come in handy. I have to check my blood sugar everyday at school at 11:30. During the Giro and Vuelta, when I am in school, I know the stages are over by the time I call, so when I call home from the school office it is great to find out early who won the stage and how the Postal guys did. I will never forget that visit to the doctor, because it has never ended.

The next “Picture” day is so cool. This week I went to Death Valley, California to do the Ride to Cure Diabetes with my Dad. He has done the ride for 3 years. I did it last year in Austin, Texas. We did 100 miles. It was the longest I have ever ridden. My dad has been riding for 5 years and I started cycling 2 years ago. I saved my money for a year to buy my road bike and now I race on a team “Les Amis”. The guys are great to me. When I started riding my mom couldn’t find me cycling clothes and she had talked to Mr. Rich Hincapie a few times. Rich’s company, Hincapie Sportswear makes cycling clothes. He also helps my mom with a Diabetes fundraiser she does. Rich gave me tons of cycling clothes and has helped me so much get started in Junior racing. We all became friends and he found out about the Ride to Cure Diabetes. He mentioned that maybe George could come and ride with us. I really didn’t think he would actually come. He is very busy, and with racing the second half of the season, I thought he would be too tired. I know George at least knows how I feel sometimes after his illness this year. You want to do something so bad and have the ability to do it but your body just says “No”. Sometimes at races I am really excited about racing, but my blood sugars are too high and my muscles don’t work correctly and I don’t have a good race. I try to say, “Oh well, there will be another time.” Mom says that Diabetes will never define who I am or confine what I can do. We LIVE with Diabetes. The time for the Death Valley Ride got closer and the plans started coming together. I was really excited because George did actually seem to be coming to the Ride. I watch George in every race I can on OLN TV. I cheer him on, but sometimes my mom cheers too loud and we make her leave the room because she embarrasses me.

Last weekend it finally happened. We landed in Las Vegas, and a couple of hours later, my dad went back to the airport and picked up George, Rich and Jennifer Hincapie. The next day we drove to Death Valley. It was a really cool place. It was awesome to see the sign that we were 250 feet below sea level. That night we had dinner and George was there. The people were really excited to see him. The day we got there it was 108 degrees. There were 2 rides. One group rode on Saturday and one on Monday. The Saturday ride had 260 cyclists ride. The temperature was so hot that they had to shorten the course from 100 to 65 miles. One out of five riders did not finish because of the extreme heat.

Our day, Monday, was much better. They shortened the course to 50 miles to help the riders out. The temperature when we started riding was 80 degrees. We got up at 5 a.m. and got ready to start at 6:15 a.m. I don’t know who was more excited, my dad or me. There were 160 cyclists on our ride. We lined up and I stood right next to George. We had talked a few times before the ride and he was really nice. We lined up and we started the ride. It was like I was there but still dreaming. My dad, Rich, George and I rode the first few miles and then I had to stop and change the setting on my insulin pump because I was exercising. George stopped with me and watched and asked question about what I was doing and why. He was really interested in what was going on. He waited for me while I checked my blood sugar at every rest stop. We rode the whole 50 miles in 2 and _ hours. The temperature was 103 degrees that day. We were done by 9:00 a.m. It was only a few hours of riding, but we got to spend the day with George and Rich Hincapie. 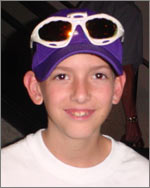 At the finish line, George said “Good ride” and he handed me his Oakley’s. These are “The Oakley’s.” The white glasses he wore in the Tour. That was so nice. When I put these on I will be an automatic 79 pound “chick magnet”. It was the perfect day. The ride was so great.

When you meet famous people, sometimes you are afraid of what they will be like. In baseball or basketball, I would never get to be around a star for a whole weekend or spend that much time with them. George was the nicest person I have ever met. It was great to meet an athlete that is so famous and not be disappointed that they weren’t what you thought they were. I said “Thank You” a million times, but I really can’t say what it really meant to me. That is why I wanted to write this to let the cycling community know what a great thing George did. The cyclist in the two rides raised over 1.5 million dollars to find a cure for Juvenile Diabetes. George took his time to come out and help us get closer to a cure for kids like me. I know they say that kids watch too much TV, but I did think it was like a MasterCard commercial on TV.

Thank you George, not only for what you did, but for who you are. You took a whole weekend of the off season for a 12 year old guy like me. For one day I didn’t think about my disease or what I could eat or counting the carbohydrates and how much insulin to take. That one “Picture” day I just got to think about cycling and riding with a great guy – George Hincapie. George your perfect “Picture” day is coming at Paris-Roubaix I just know it, and I will be watching and cheering.

Thanks, your friend always,
Stradford Helms

Get PEZ Headlines for Your Site!