Mano A MANCEBO: The PEZ Interview

Recently I had a chance to chat with Francisco Mancebo, by telephone at his home in Spain. Talking to the 27 year old Pro from the newly formed Illes Balears-Banesto team I got the sense the he is a very patient but focused person.

When I first made contact with him about the interview he was at a team training camp in Mallorca and I felt like I was bothering him. However, when we actually did the interview, he was at his home and he was very easy to talk to. We talked about few different topics from how he got started to how he felt last year when his team was left without a sponsor for 2004. So here’s what he said…

It All Started When…
ND: How and when did you get started in cycling?

FM: I started in 1984 at age 8. My father decided to sponsor a cycling school. (Cycling schools are basically organizations for youngsters to get into cycling and learn what bike racing is all about.) After that I raced cadets, juniors and eventually Elite-Sub 23. I raced Sub-23 with Banesto’s development squad. In 1998 after 3 years in the Elite-Sub 23 team I turned pro with Banesto in 1998 at age 21. 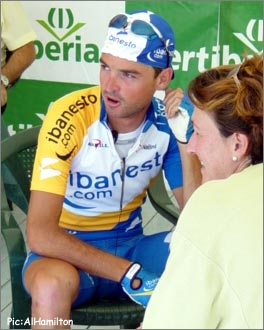 THE NEW TEAM
ND: What were your feelings last year when it seemed iBanesto would not find a new sponsor for 2004?

FM: Until World’s I was nervous but ok because one can only think of the races at the time. After World’s I was more nervous because I had to begin looking at other teams and start talking to them. I knew I would find a new team with time, and luckily the Illes Balears thing came along and everything worked out fine.

ND: Did you start talks with other teams or were you confident in your team director that everything would be resolved?

FM: I started to talk to other teams after the Vuelta, but I was confident in our director that something would come about. I spoke with Saunier Duval, Kelme, and an Italian team.

ND: How long were you willing to wait until you started looking for a new team?

FM: I was willing to wait until after the World Championships because I preferred to concentrate on the races that were left before focusing on the search for a new team.

ND: Is there a team you secretly would love to ride for – which one?

FM: No, I’m very happy where I am at the moment and very happy to be with Illes Balears-Banesto for two more years in the future.

FM: The team has 11 riders, which were part of the former team, but we lost some important riders such as Eladio Jimenez and Pascual Rodriguez. At the same time we have some new riders that will be very important such as Pradera, Tauler, Horrach, and Colom who just won the Challenge Mallorca. The quality of the team is very similar and the most important thing is that we all get to know each other and that we are confident in each other.

ND: Will you have the same amount of support?

FM: Yes, for my objectives I will have the necessary support. The guys on the team know when it is their turn to shine and when they have to work for someone else. 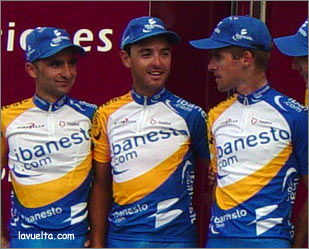 Mancebo (center) yuks it up with teammates on the podium at last year’s Vuelta.

BIG TOURS, BIG ASPIRATIONS
ND: 10th in the Tour and 5th in the Vuelta in ’03. How do you plan to improve those results?

FM: For the Tour I hope to arrive a little fresher than last year. In 2003 I was at 100% in May and July was a long way off. That meant in the Tour I was ok until the Pyrenees and then after that it was all down hill. This year I plan to be in form in June. I hope to finish the Tour this year in the top five.

ND: What races will you do as training and prep for the Tour?

FM: I don’t plan on racing much. I’ll probably do 3 or 4 1-week tours like the Vuelta a Castilla-Leon, the Vuelta a Aragon, and the Midi Libre (name change for 2004). I’d like to do the Dauphine Libre but the team has already made commitments for Catalunya and Germany.

ND: Which race – The Tour or Vuelta will be more important for you and why?

FM: The Tour will always be more important. It’s the Tour. The Vuelta is different. It’s more open and the majority of the riders are Spanish. It gives you a chance to go for stage wins and the podium if it’s possible.

ND: In the 2003 Tour, what was the most important stage for your overall finish?

FM: None really. I was ok until the first ITT. Even the TT wasn’t bad. I finished 11th even though I lost 5 min to Ulrich. Alp D’Huez was good as I finished 4th and the next day (stage 9) I finished 8th. I was in the top 5 going into the Pyrenees but after that I was cooked and just tried to maintain my place.

ND: Which stage did you feel the best on?

FM: I didn’t feel my best on any stage, but I guess with that being said it would have to be Alp D’Huez since I finished 4th.

FM: The same as always. The Tour route is always very similar. Alp D’Huez will be tough and in theory it is a tour route for climbers, but then Ulrich, Armstrong and the “others” show up and the same guys always win.

ND: Will the Alp D’Huez TT decide the Tour? If not, what will?

ND: Having ridden both the Tour and the Vuelta, how do the mountain stages compare?

FM: There is no comparison. The Alps are always much longer, harder, and less explosive. The Vuelta’s climbs are typically shorter, faster, more powerful and explosive.

ND: Which do you prefer, the Pyrenees or the Alps?

FM: I prefer the Alps because they are longer and less explosive, however given my finish in the Vuelta last year I guess I didn’t do too bad with the Pyrenees and the other Vuelta climbs. 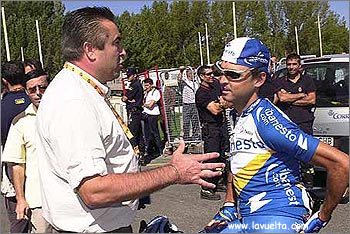 Mancebo talks with the Spanish national team selector Paco Antequera about an upcoming trip to Hamilton.

AND WHAT ABOUT…
ND: What’s your opinion of the new Opera bikes for this year?
(I recently had one of the Leonardo models in my hands at a local bike shop and it’s incredible.)

FM: They are of the exact same quality as Pinarello. You know they are made by Pinarello, right? To tell you the truth, I worry very little about the bikes. It’s the motor that really matters. If you want to talk bikes, you should talk to Arrieta, he knows a lot about the equipment.

ND: Any advice you can give young riders who would like to be Pro’s some day?

FM: Yes, be calm and approach cycling with patience. Don’t try to go to far to quickly. If you are good enough, you’ll make it. Also, I think that most young cyclists should race at least 2 to 3 years in Elite-Sub 23 (+/- CAT 1,2 US) and show their qualities before trying to turn Pro. 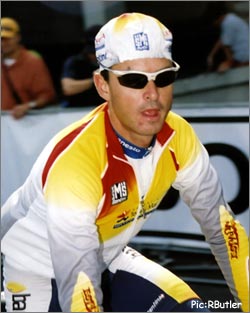 Turns out is was a good chat with Antequera, as Mancebo showed up in Hamilton in national colors.

ND: So, how about a little about your personal life? Where do you live when you aren’t traveling for races? Are you married or do you have a girlfriend, and how does she handle you being away from home so much?

FM: I live in a small town in the Province of Huelva (southwest Spain) called Isla Antilla, and yes I’m married now. I married my girlfriend Luisa in November of 2003. We had been dating since 1994 and she has become accustomed to me being away for races and training camps so there’s no problem.

ND: Ok, one last question from one of our other writers. Considering that iBanesto works closely with Dr. Alejandro Lucia at the U. Madrid, how do you feel about the importance of a scientific approach to training and how has it contributed to your success?

FM: Well, I don’t know how scientific I would call our training. We do the typical fitness and power tests that everyone does. I’ve seen other riders training plans it we all do almost the same type of preparation. Last year we started working with power and this year we may move from power and heart rate to power only if everything goes ok.

Thanks Francisco for taking the time for us to get to know you a little better. We hope your spring training goes according to your plans and that you and Illes Balears-Banesto achieve what you set out to do. Maybe the next time I’m down your way we can have a cup of coffee or go for a ride.

Nathan Deibert is a 26 year old young American living in Sevilla, Spain, riding for the Adecco – Campos Lorca team and chasing his dream of a pro contract.