After a heavy night of Friday night action at the Gent six day with a promising weekend of bikes, beer, frites and track action ahead, there was still time to enhance the weekend with one more Belgian staple – Cyclocross. With the World Cup action just a drive away, the opportunity to see the best ‘cross men in the world couldn’t be knocked back.

Saturday dawned bright and crisp for the drive up to Koksijde and the ‘Dune Cross.’ With a little time on our hands we decide to go up to the North Sea coast via Ypres – scene of brutal battles in World War 1 – to see the famous Menin Gate war memorial. 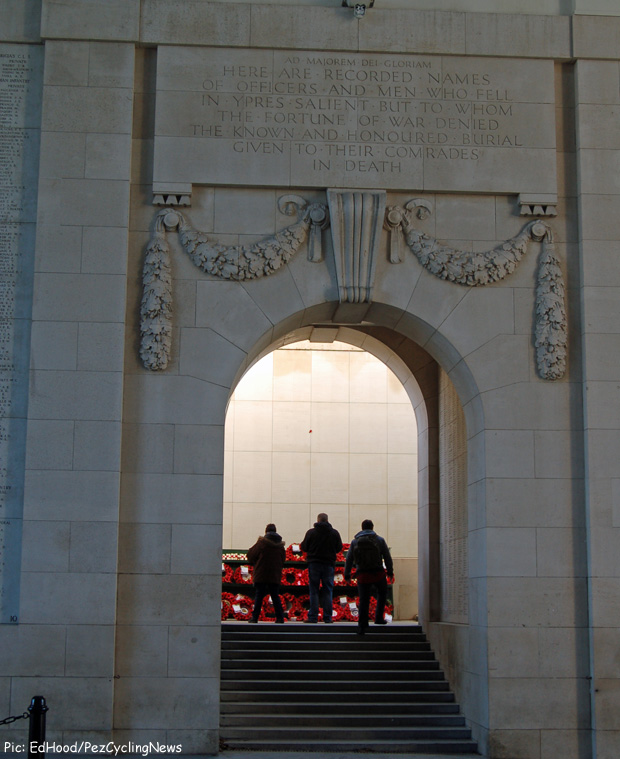 It was completed in 1927 to honour the names of 54,000 souls from Commonwealth nations who died here and have no known graves; they’re countries, names and regiments are now chiseled into the sandstone panels around the monument. The graves of hundreds of thousands more can be found in cemeteries all over northern France and Belgium.

You leave Ypres quieter and more thoughtful than when you arrived.

The ladies were on their last lap at Koksijde when we arrived to lay down our 15 Euros and head into the dunes to watch the world’s finest ‘cross riders in World Cup action – and eat frites . . . 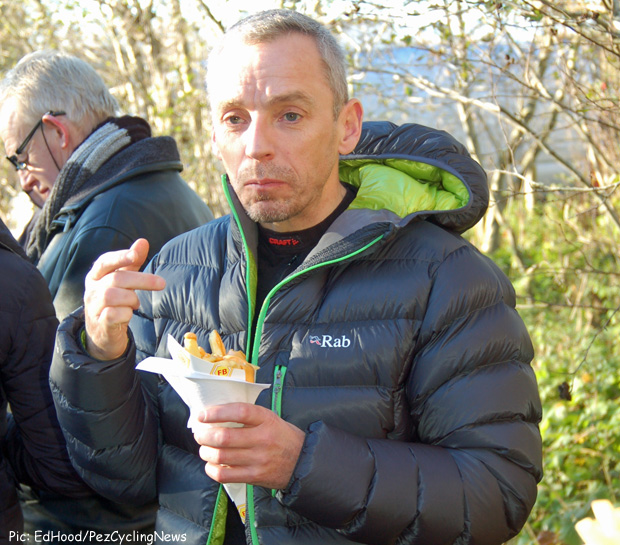 It’s a highly technical course and if you’re a rider who doesn’t care for sandy run ups and drop offs then you’re in for an interesting day’s racing. The start in ‘cross is crucial, you have to be up front early or you’ll get caught in the traffic and held up in the inevitable crashes. 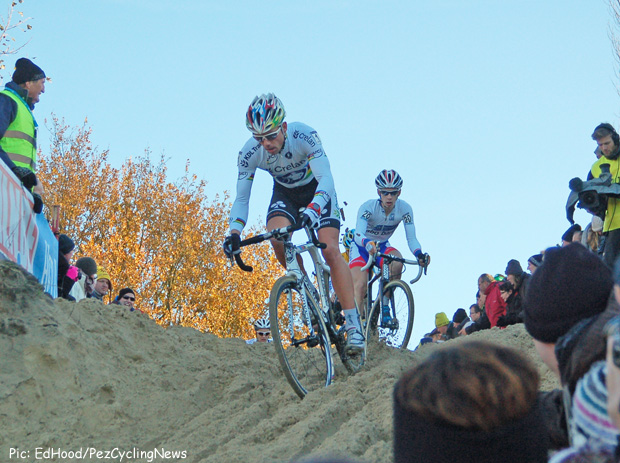 Sven Nys was quick off the mark and lead through on lap one with the rest of the ‘Bigs’ hot on his trail – French champion, Francis Mourey, Belgian former World Champion Niels Albert, Dutch World Cup leader, Laars van der Haar . . . 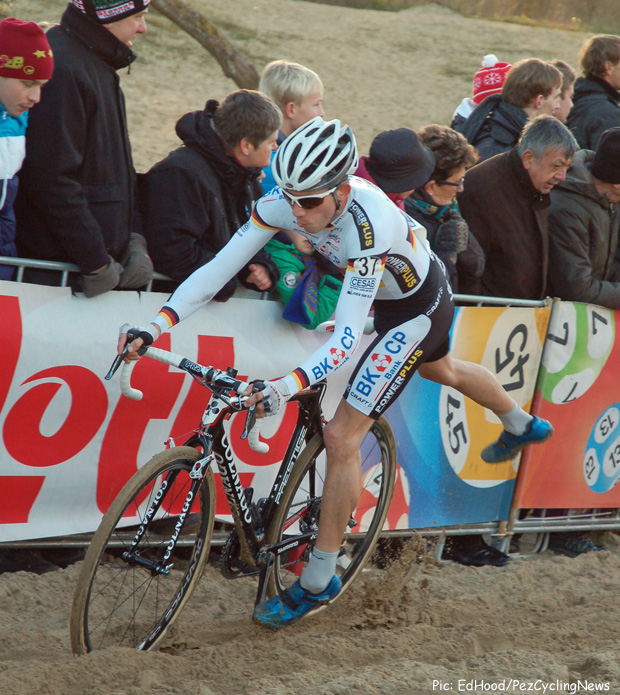 And German Champion Walsleben, who was able to pick the best lines as he lead through on lap three. 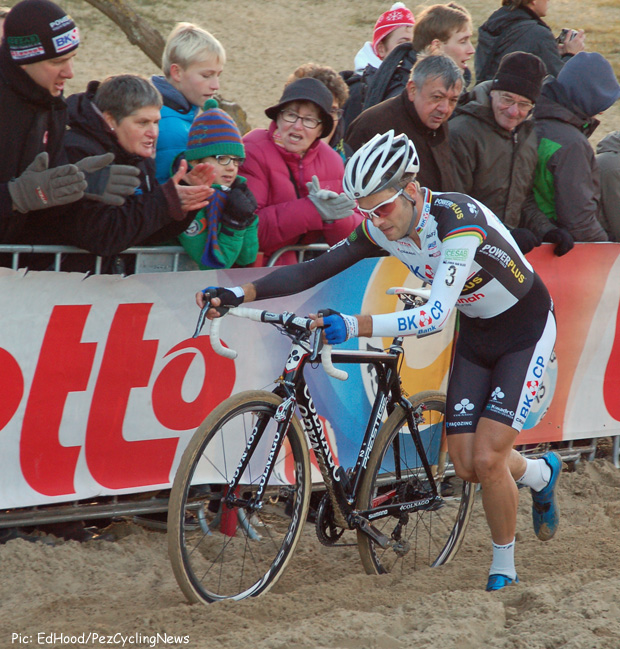 But by lap four it was the ‘Niels Albert Show’ – with the Belgian putting on a demonstration race for the fans. Powerful, stylish, fast and looking like he’s enjoying every minute of it and oblivious to the chaos he’s leaving in his wake. 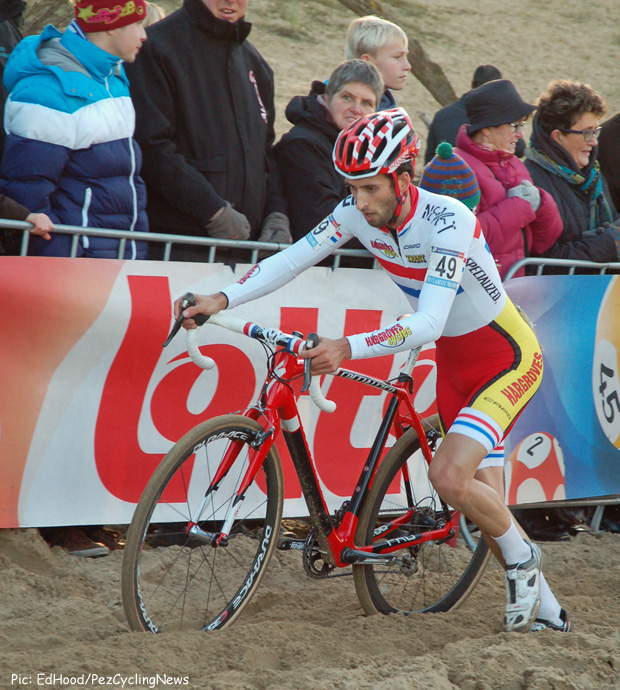 But it’s not a good day for the ‘Anglos,’ British Champion, Ian Field who made such a great start to his World Cup campaign with two top 20’s doesn’t have good sensations – down in the mid 20’s and heavy legged on the run ups, he’s obviously not over the virus he had two weeks ago. 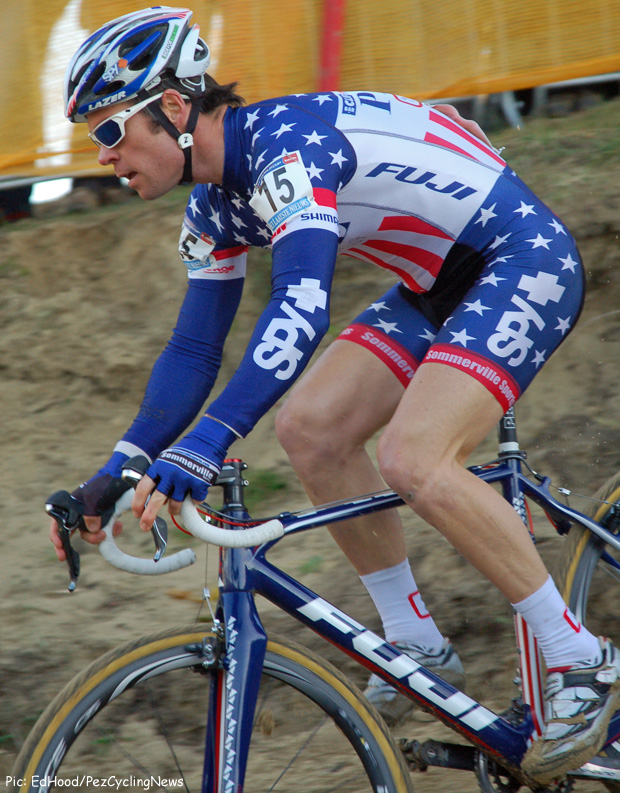 US Champion, Jonathan Page is even further back and simply not on a good day. 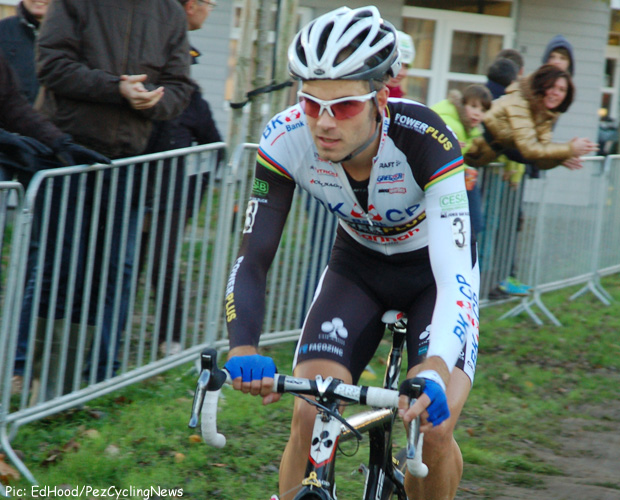 Albert is imperious, even though the ‘peloton’ closes the gap a little on the last laps the man who loves the sand has time to ‘high five’ the fans on his last ‘lap of honour.’ 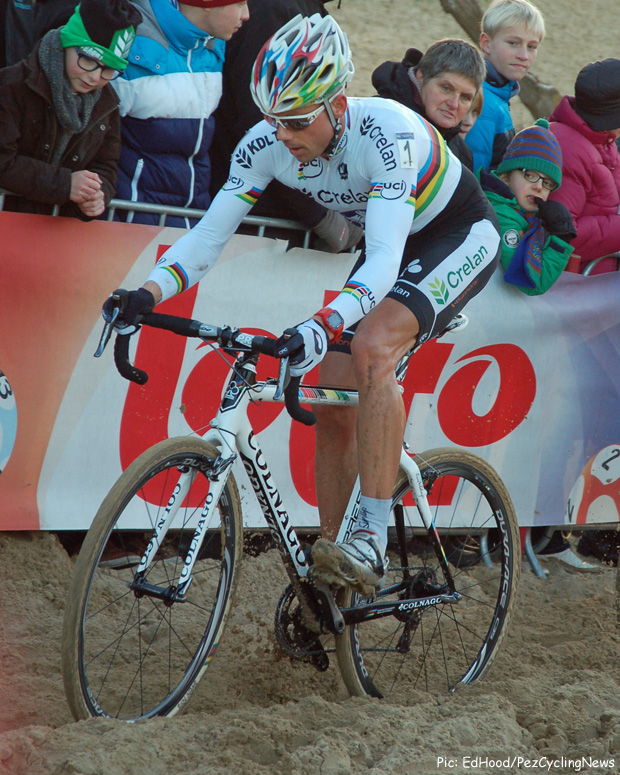 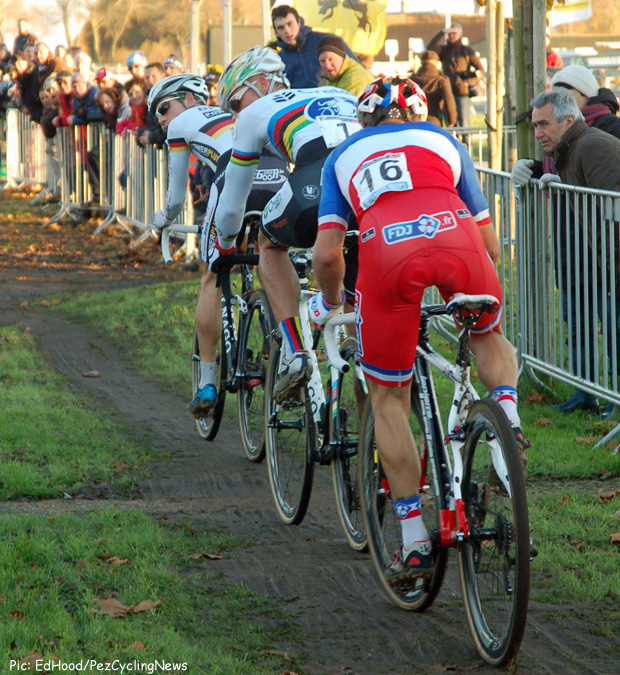 Mourey is an accomplished roadman as well as a top ‘crosser and has no problems with Walsleben or Nys in the sprint. 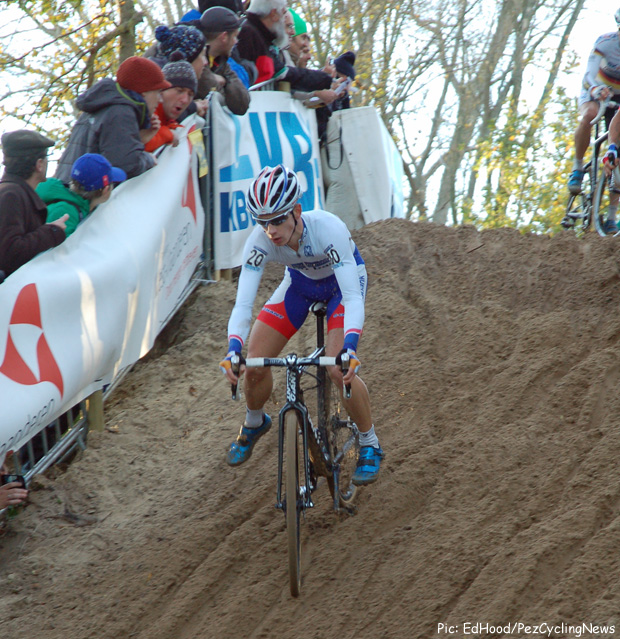 Precocious Dutchman van der Haar is out of it in 10th spot but hangs onto his World Cup lead. Field comes in 29th but is still well inside the top 20 in the World Cup rankings – so not too much of a disaster. And Albert would make his weekend a special one with a Super Prestige win in Diegem on the Sunday. 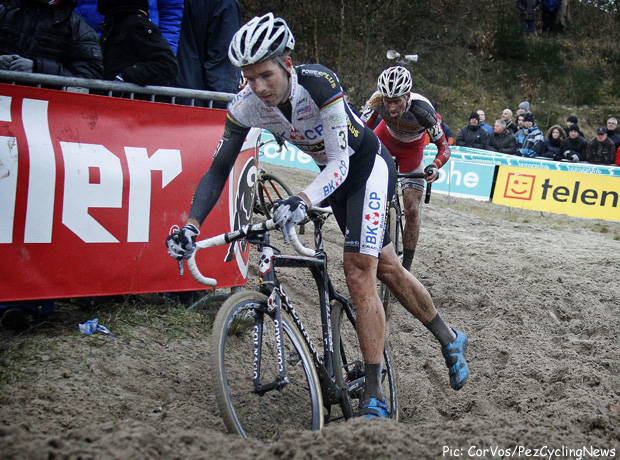 Albert on the way to his 2nd win in two days in Diegem on Sunday.

Saturday night we headed into another full house at the Kuipke, but not before we’d paid tribute to what used to be the Mecca of bike shops back in the 70’s – Plum Vainquer, ‘the Winning Feather’ but now sadly, ‘just another bike shop.’ 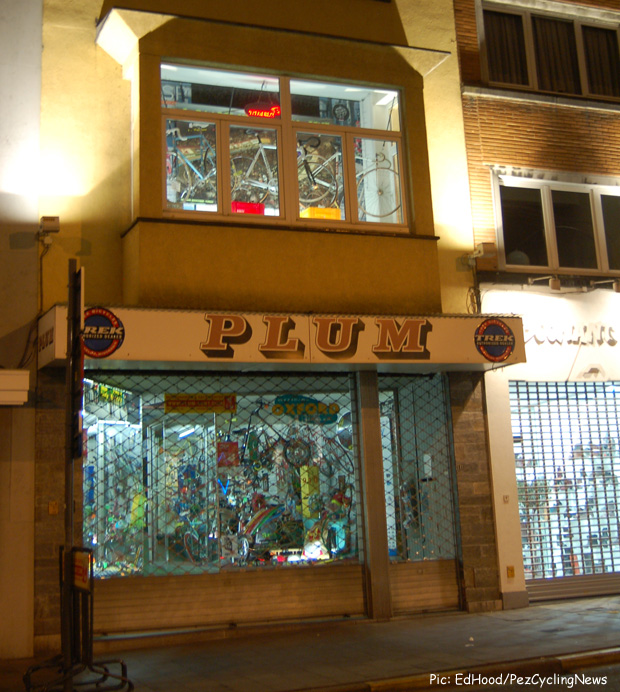 Marvulli was returned to the fold but Dane, Jesper Morkov’s partner Swiss rider Claudio Imhof was out for the evening as a precaution after a hard knock on the head in a crash, late on Friday night.

Bartko and Kalz stitched up the time trials and Iljo & Wim were excellent in the big chase in front of a full house; even pulling off a ‘doublet’ – that’s two consecutive lap gains without a pause between. 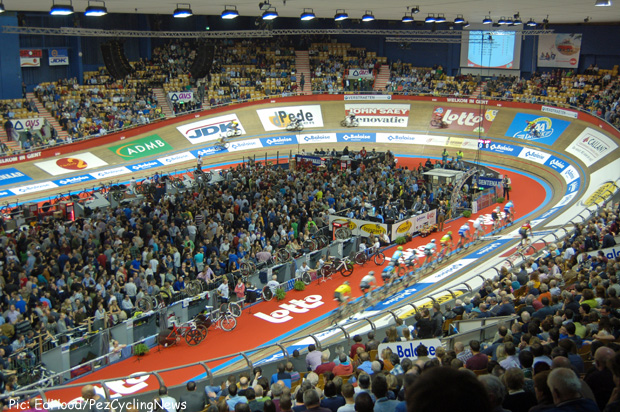 John Paul Young’s chase anthem, ‘Love is in the Air’ never sounds better than it does in the heat of a Gent madison. But despite Iljo’s panache it was Lampater’s obvious strength which impressed us most – at one stage he rode De Ketele off his wheel.

But in fairness to Kenny, partner Van Hoecke wasn’t at his best after a long road season and then a hard fought win with De Ketele in the Amsterdam six day. De Ketele tried hard to compensate for Van Hoecke’s lack of edge – but sooner or later it had to catch up with him . . .

And we’d only learn on Sunday night that Van Hoecke’s mother passed away on Saturday – but the young Belgian stayed in the race.

Big Bob won the Derny but could be seen talking to the drivers after the race. He wasn’t happy – there was much finger wagging and waving of arms as the German made his point to the men who do seem to think that the race revolves around them. 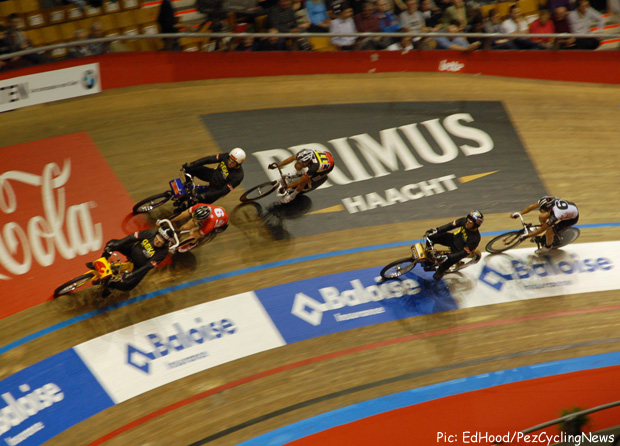 Time to go; the Vivaldi was waiting – but the Monopole was closed for our night cap, so it was the Cafe Bij Lucy for a final Jupiler. The guy stretched out sleeping on the seats and the three girls doing a fair impersonation of the three witches from Macbeth meant we didn’t linger. 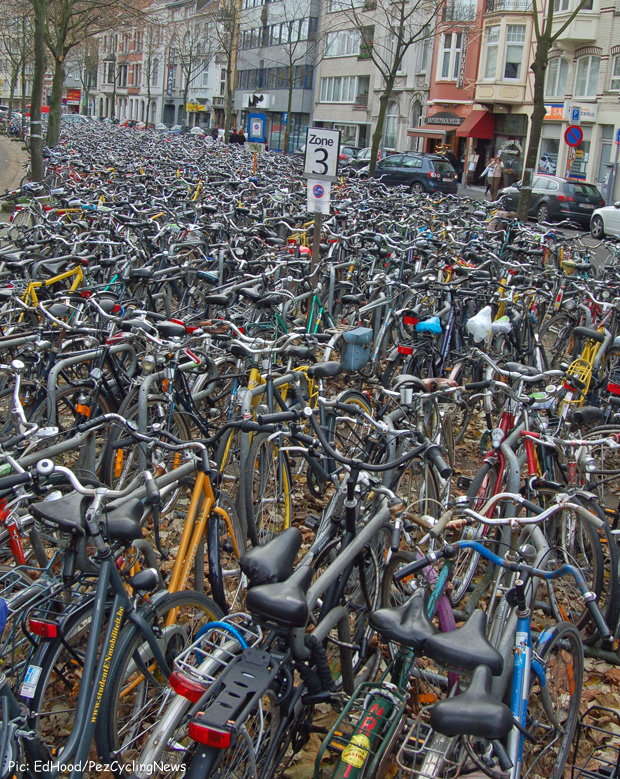 Sunday and the racing starts at lunch time with the UiV U23 cup where GB rider Steven Bradbury was having a tough baptism of fire. The first pro race was a 150 lap sprint series, six sprints with 25 laps in between them – as Dave observed; ‘not exactly riveting!’ 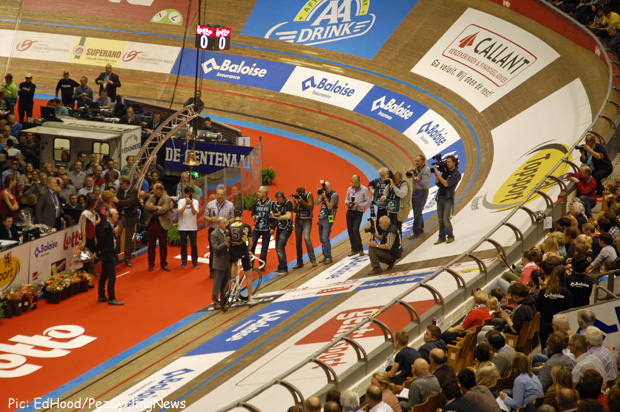 Iljo won the Derny – surprisingly and then it was Gent saying ‘goodbye’ to Marvulli – this is his last six day season. Always cool with the media he told the packed house; ‘it’s a beautiful cycling event but you made it too hard for me ever to win it!’

Going in to the last chase the standings were:

With the French World Champions Kneisky/Brisse at a remote three laps. With their points advantage the only way that Lampater and De Buyst could lose would be for either of their two rivals to put a lap into them.

Kool and the Gang’s ‘Celebration’ blasted as the gun fired and down in the cabins the soigneurs began to break camp for the migration to Zurich where the ‘Six Day Nights of Zurich’ over four days kicks off on Wednesday.

‘Never say die’ De Ketele took the first lap and the rest of night saw the three lead teams thrust and parry but with the teams in second and third spot unable to slip out of Lampater’s head lock. 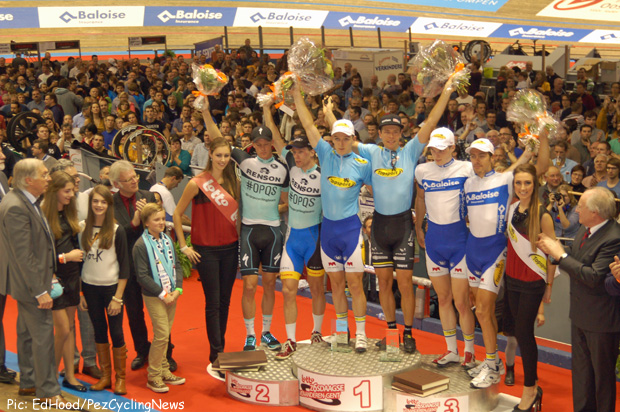 In the dying minutes it looked as if Iljo just might do it – but it wasn’t to be and it’s De Buyst who’s face will be on the covers of the Monday morning papers. 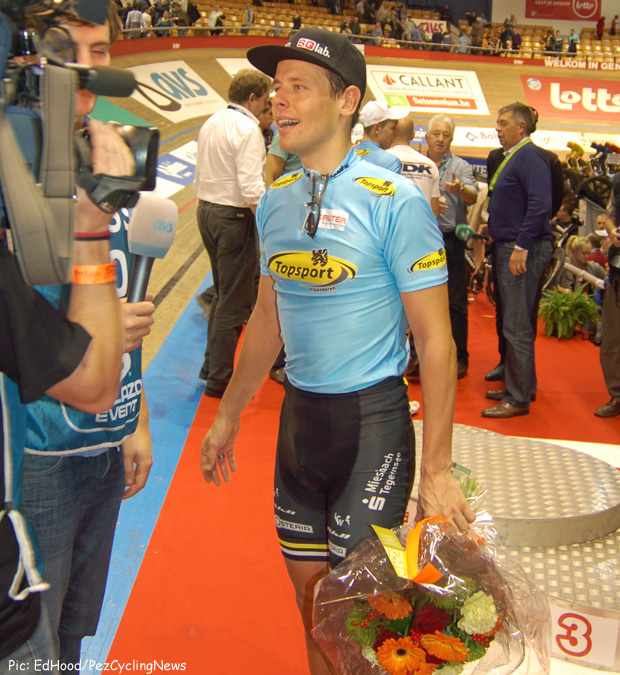 Meanwhile, Lampater slipped quietly away – but not before he had a word with PEZ.

“I finished the six day season strongly with second place with Luke Roberts in Copenhagen back in February and I had a good summer on the road. I was married in the summer and I think that helped too, it makes things more settled in your life. The last three winter seasons my form has been compromised by illness but this year I’ve had good health and that shows. It’s maybe just a couple of percent difference but it’s also the difference between finishing fifth and winning.

Not one of those famous ‘all down to the last sprint’ Gent finales but a good race with worthy winners. 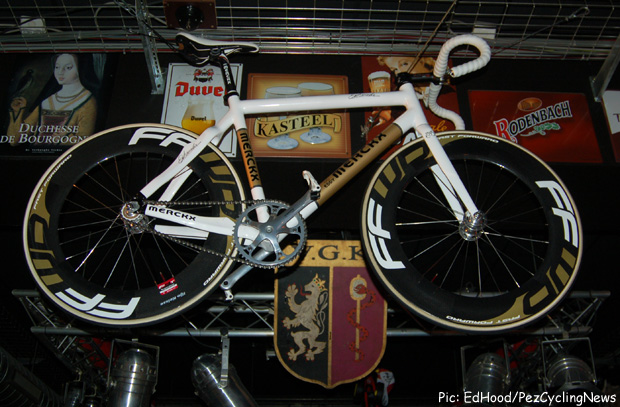 Despite one of Iljo’s old six day winning machines hanging from the roof of his dad’s bar, De Karper was just too mad for us – or maybe we were too sober? 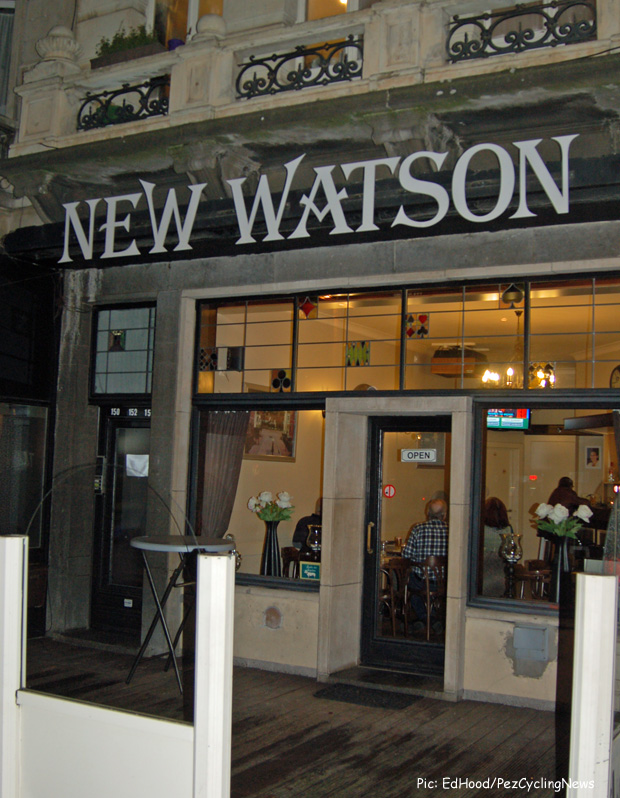 The New Watson was too much like our mum’s living room for comfort so we repaired to the Faraos. 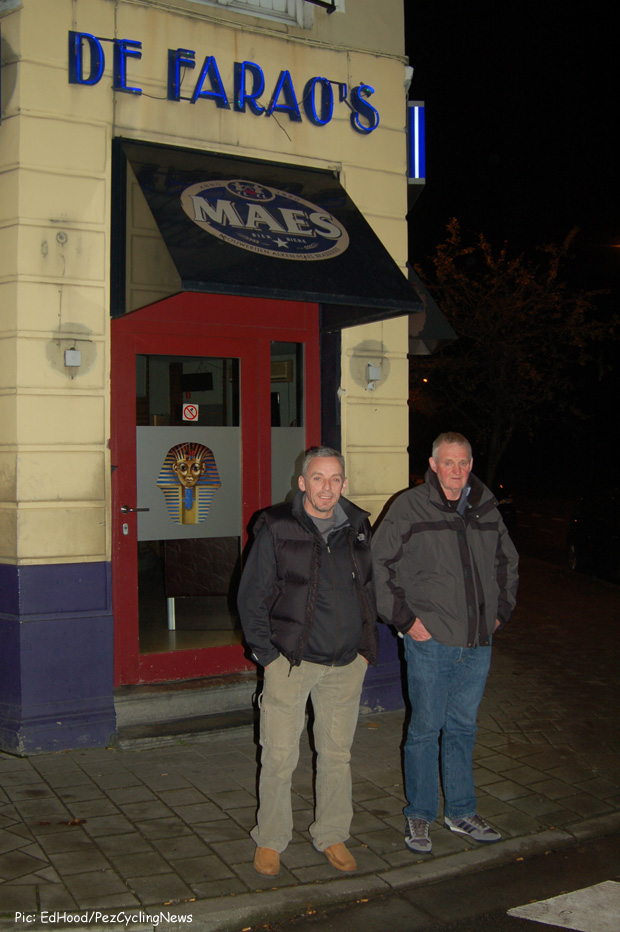 There’s always the risk of being stabbed in there but fortunately the two East European heavies were too deep in conversation about their next bank raid to trouble with three Scottish wimps and we were able to debate the race finale in peace.

And is Gent still the best six day there is?

Michael Rogers comments on the best and worst this season