Race report: Wow. It was more or less a case of last sprinter still kicking as John Degenkolb gave Giant-Shimano another huge win in a crash-riddled edition of Gent-Wevelgem. It seemed like barely a kilometer went by without the cameras picking up scenes of tarmac-laden woe.

It was dry and overcast, so the road conditions were good for racing. It seemed more likely that the often narrow roads, traffic furniture and desperation for position caused the chaos.

Giant-Shimano were thereabouts at the front all day, but committed their resources wisely to put Degenkolb in a position to finish it off. His rivals Greipel and Farrar were among those wondering what might have been as they watched the race disappear from prone positions on the road. 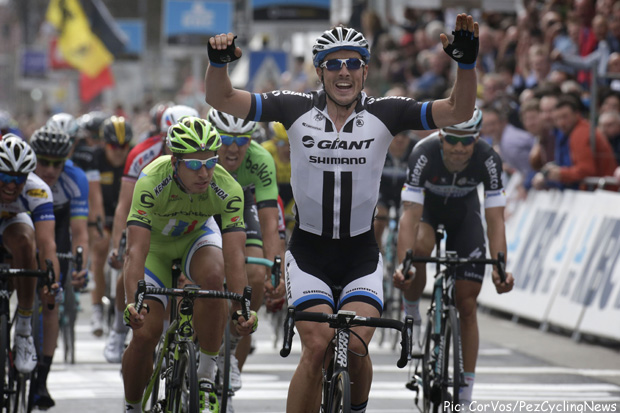 This is how it played out …

Knuckling down and charging into a morning of service for their team, with a glimmer of personal ambition, were Marcel Aregger (IAM Cycling), the young Dane Sebastian Lander from BMC, Team Saxo-Tinkoff’s Manuele Boaro, Frederik Veuchelen (Wanty – Groupe Gobert) and Jaco Venter (MTN-Qhubeka).

The peloton waved them off more or less as soon as the flag dropped in Deinze’s Grote Markt, a little west of Gent and within close reach of the French Cemetery, and the Flanders Fields Cemetery where so many American soldiers lie. Today’s race is a 233km homage to the loss, misery and brutality of the Great War.

The renamed Gent-Wevelgem in Flanders Fields remembers the fallen and the afflicted from that horrific conflict which sparked in Sarajevo in June 1914, which sprawled across the European continent and saw some of its very worst consequences in the mud and trenches of Flanders. 600,000 people died in the Westhoek region alone …

As the break swept west to the coast the lead shot up to over 10 minutes barely thirty kilometers into the race, past Ardooie and Kortemark and Diksmuide.

A sojourn across the French border, twice up and over the Casselberg and the break still had almost nine minutes.

89 clicks remained when Ian Stannard tried to inject some pace on the Catsberg and there’s a scramble for the wheels and then a regrouping.

80 left and the Baneberg has further dented the break-peloton buffer – down to three-and-a-half minutes as Francisco Ventoso is at the epicentre of a crash which sends other riders somersaulting.

79 kms left as the break starts the Kemmelberg with three minutes in hand. Lander, an ace trackie, is struggling with the gradient. The riders take the smooth escape road off to the side of the Kemmelberg (rather than the cobbles which re-arranged Jimmy Casper’s face in 2007) with Cancellara heading the peloton. Hushovd and Sagan are in close attendance as the riders hurtle past the French Ossuary.

At the back, Matt Goss gets a bike change, but it doesn’t look like a particularly happy one as Michael Hepburn tries to push start him on the cobbles.

After the Monteberg, the break is falling apart, and BMC’s Silvan Dillier makes a dig from the field and eventually picks up his team-mate Lander. Yet another crash outside yet another war cemetery leaves Ian Stannard (Sky) in the deepest of ditches. Medics, race officials and photographers pile into the ditch with him as the ambulance is flagged down. Stannard is upright but looks in a world of pain. Race done.

The town of Loker looms inside the last fifty clicks, and the race is compressing – everyone (break, chase, peloton) within half-a-minute. But there’s a mechanical/crash interface which slows the main field down again. Boaro is not ready to give up his ambitions and attacks his breakaway companions just before the the Baneberg again, It’s a narrow twisty climb, no room for mistakes. Matt Goss is right at the back shepherded by Simon Yates. 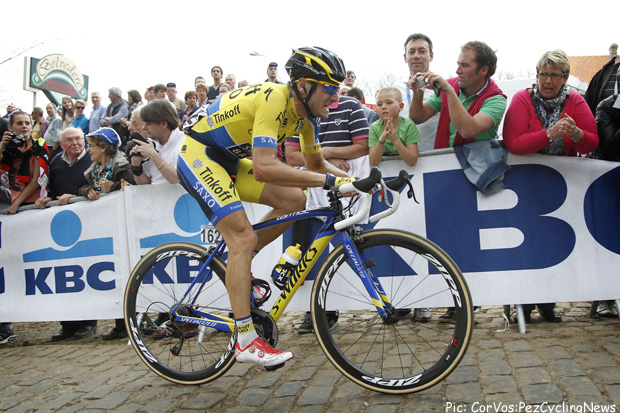 Eisel leads Sky round a tight corner then sits up and takes a very long look back to see where his team-mates are, just like Sean Yates used to do back in the day.

43kms left and another huge pile-up – nerves in the lead-in to the Kemmelberg again. Luca Paolini is held up, Nicki Sorensen and Isaichev, too. Right at the bottom is another Sky rider. The only rider for whom it’s good news is MTN-Qhubeka’s Andreas Stauff who’s been riding along on a flat rear wheel, so it allows him to catch up.

Lotto-Belisol’s DS Marc Sergent is urging his men forward – none of them caught up in that crash, so this is the time to go.

Boaro is on the Kemmelberg again as the Belkin-led field sweeps up the break. Gaps start to appear in the field as Cancellara, Sagan, Degenkolb and Hushovd are up there. Greipel is mashing the pedals round in a bid to stay in touch.

Off the Monteberg, all the remaining race favorites seem to be present as the field is split and lined out. A swarm of camera bikes, the like of which is almost unprecedented, plagues the leaders. BMC, Lotto-Belisol and FDJ are the most prominent teams now.

Inside 25 kilometers to race, and the race enters Ieper (or Ypres), with all its muddy, bloody history remembered in the In Flanders Fields Museum which the riders pass before sweeping under the Menin Gate.

Silvan Dillier tries again to take the pressure off his BMC buddies Hushovd and Van Avermaet. Devolder (Trek) and Amador (Movistar) go with him. Van Keirsbulck chases and avoids a woman dressed in her Sunday best by inches as she looms onto the road for a view that was almost to real and 3D.

Ten kilometers left, and Cannondale, Giant-Shimano, Lotto-Belisol and Omega Pharma-QuickStep are leading the chase. The front trio have done a hell of a job to open a 35-second lead on flat, straight, wide-open roads.

Eight to go and another huge crash takes out Greipel, Thomas and the growing in form Tyler Farrar. NetApp-Endura lose a couple including Sam Bennett. 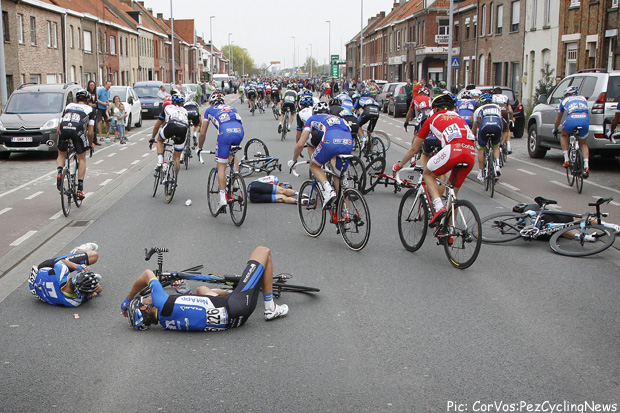 Five kilometers left and the leaders have 26 seconds. They could make it, but they can’t muck about as OPQS are now chasing desperately for Tom Boonen.

Devolder, Amador and Dillier battle bravely but they’re caught at the red kite as a group of about 40 guys battle for the line.

It’s a drag race, another tumble in sight of the line … and Sagan hits out early, but Degenkolb comes through late holding off Arnaud Demaré. 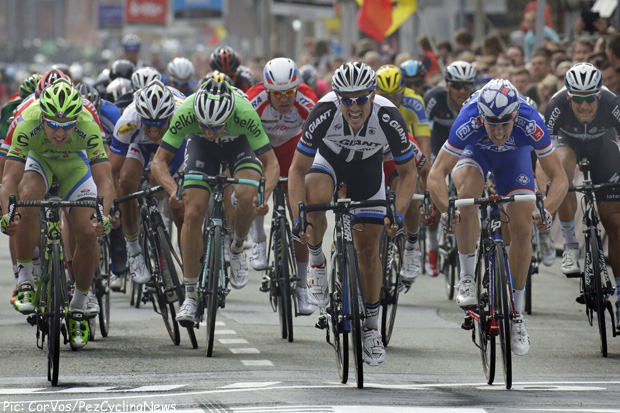 A cracking race, with intrigue right the way through. Congratulations to John Degenkolb and his Giant-Shimano team, and best wishes to all those who found themselves on the deck.

Race Quotes: John Degenkolb (GER)
“This race is one of the really big classics and I am so happy to add Gent-Wevelgem to my palmares. The race worked out perfectly for us today. The guys were really strong and Dries Devenyns (BEL) did a great job chasing towards the end – he is really strong at the moment.

“Koen de Kort (NED) positioned me perfectly in the final, driving me onto Sagan’s wheel and I had the right position and could come through at the right time so it was a fantastic sprint. I am really enjoying sprinting on the Giant Propel bike and winning here is a nice way to thank our sponsors for their confidence in us.

“My shape is good and this is a good sign for the next big races. Last weekend at Milan-Sanremo was probably one of the most disappointing moments of my career, and today everything went 100% better than last week so I can forget about that disappointment now.”