In a stage which threatened to be spoiled by flood conditions and sprinters surviving to the finish it came down to a crash on one of the two sharp left-handers with a kilometer to go which determined the outcome. The crash effectively blocked the road and jettisoned Canola (Bardiani Valvole) on to the finishing straight chased by a small group of riders. Unfortunately for Canola, John Degenkolb (Argos-Shimano) was in that group and he slowly overhauled Canola as they sprinted up the finishing straight. 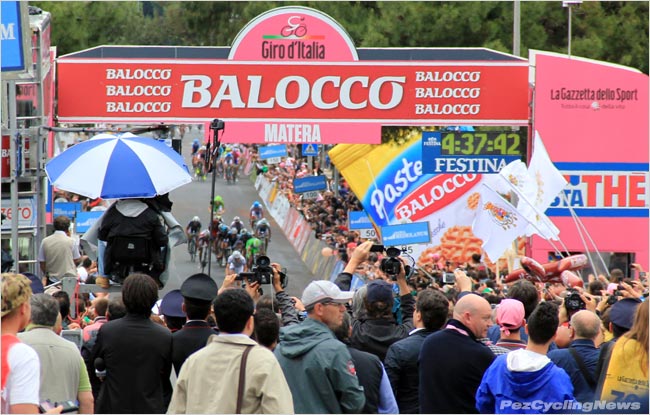 How It All Began
With so few sprinter’s stages in this year’s race this was a stage that the likes of Cavendish and Goss fancied for themselves, if they could remain in contact over the two strappi towards the end of the race. As far as Cav’ was concerned it almost worked.

The usual break went clear after six kilometers and contained a handful of riders out to get their sponsor’s names on the television screens. The peloton was content to let them get up to ten minutes at one point but then the Katusha team of race lead Luca Paolini began to set the pace to peg the gap. At 90 kms to go Katusha pulled over and left the sprinter’s teams in charge of the chase if they wanted to get anything from this stage. Having one win in the bag already Omega Pharma-Quick Step left the bulk of the work to Orica-Green Edge and Argos-Shimano. The main contenders for overall victory, perhaps thinking of the time trial on Saturday, were content to stay protected within the bunch and not play a major part in the stage. 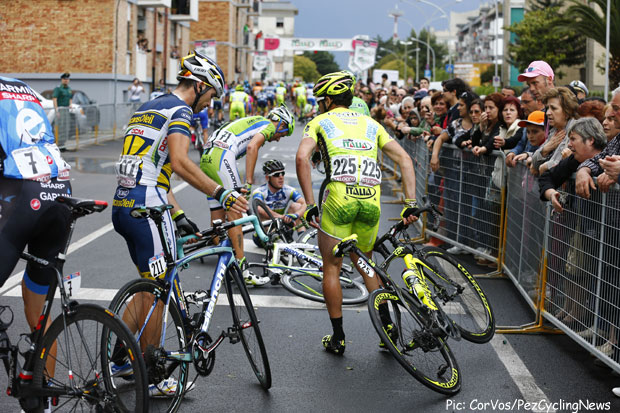 The aftermath of the crash that shaped the final.

The big story however, and one that contributed to the final result, was that there was a massive downpour of rain at the finis and that the riders were heading towards it. The gap was steadily coming down as the leaders turned north away from the Ionian coast and headed inland and towards the first of the two climbs at Montescaglioso.

At 23 kms to go it was all over for the break as Movistar pushed up the hill looking to keep their man Ventoso in contention for the finish. The biggest interest, however, was that Mark Cavendish was climbing well and at first appeared to be coping with the gradient. But the effect of the climb was starting to become apparent as the Manxman began to slip to the back of the group, albeit that his teammates stayed with him. If he could hold on over the top then he could come back through on the descent.

Up front Pirazzi took the summit to add to the first climb of the day and as the group swept over it was obvious that the bunch was completely strung out. Cavendish eventually crossed some 50 seconds down on the front of the bunch and on the fast descent two groups formed with about 80 riders (containing all the main GC contenders) in the front. The second group had Cavendish and a number of other riders, including Goss, who had slipped back and although they chased hard to begin with, it was when the road veered up again towards Matera at 8 kms to go that it became clear that they were not going to get back on. Cav’ wasn’t happy but there’s always tomorrow for him with a more traditional sprinter’s stage into Margherita Di Savoia. The descent also saw Cobo (Movistar) crash to add to his woes so far this Giro.

As the lead group climbed towards the finish a small break of three were just off the front by six seconds and contained Lars Bak (Lotto-Belisol) but it was quickly pulled back when BMC took control, keeping the pace high and protecting Cadel Evans who looked comfortable in the wheels. The sprinter’s teams took control with two kilometers to go but this finish at Matera was always going to prove difficult to control with two sharp left-handers within the final 1000 meters. It was made more difficult by the roads which were still very wet from the earlier downpour and true to form the front of the bunch went down at one kilometer left to race.

It happened in such a way that it seemed to propel Canola away on his own chased by a small group. It seems to have been caused by the combination of a newly-painted pedestrian crossing and a touch of brakes; a lethal concoction. This wasn’t a conventional sprint as Degenkolb chased hard for the whole finishing straight and eventually overhauled Canola with about 150 meters to the line to be followed by Angel Vicioso (Katusha) of Spain and Paul Martens of Germany (Blanco Pro Cycling Team). It became clear later that the big German had just managed to avoid the crash himself. He was lying in sixth wheel and had to take his foot out of the pedal in order to cut inside one of his teammates who went down. He kept his momentum and managed to power after Canola. 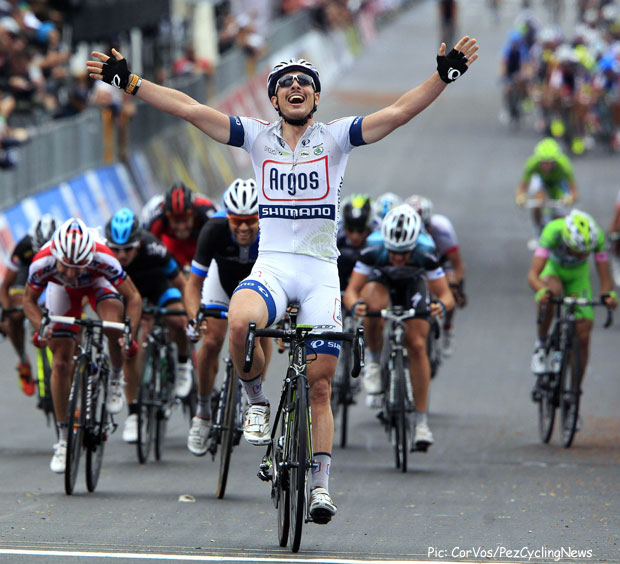 All of the main contenders finished within the main bunch and will be happy to get through the next two stages before the time trial on Saturday. Tomorrow’s another day for Cavendish and Friday sees a nasty, brutal stage where this year’s Giro won’t be won but may well be lost for some of the bigger names. 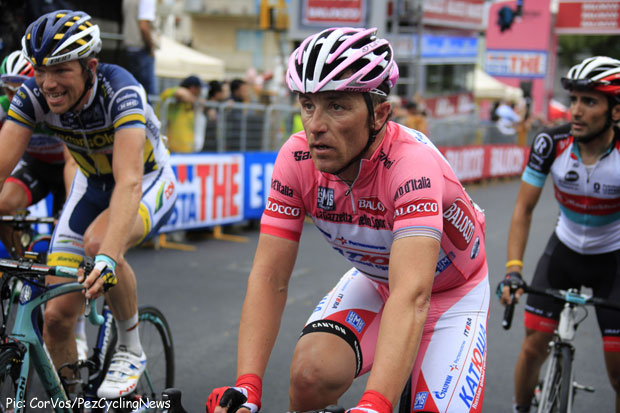 Luca Paolini and all the big GC men finished in the same time but the day was anything but easy.

Blanco News: Third place for Martens a “free” boost for the team