Race Report: The weather beat everyone in today’s Giro d’Italia, especially the TV cameras. In the end it was an exciting stage, although knowing what was happening was not easy. When the Pink jersey of Vincenzo Nibali came out of the clouds with Mauro Santambrogio we knew there had been a battle royal and the Sicilian had come out on top. Santambrogio took the stage honours and Nibali had the time on his adversaries.

Stage 14 was scheduled to go over the climb of Sestriere before finishing in Bardonecchia (Jafferau), but the snow reports were not favourable, so at 12 noon CET the race organisation announced that Sestriere had been cut. The route would take in the Val di Susa and the finish will stay the same with the Cat 1 summit climb of Jafferau, which is 1908 metres high, the sage will now be 12 kilometres longer at 180 kilometres. How this will affect Sunday’s stage into France for the summit finish on the monster Col du Galibier we will find out later.

It was a wet peloton that rolled out of Cervere, but a relieved one not to have to go over Sestriere, the top is over 2,000 meters. Instead the course headed to Pinerolo and along the fairly flat valley road to Susa, then climbed from 487 metres to Bardonecchia at 1,281 metres in 37 kilometres. From there the road climbs 627 metres in 7.5 kilometres with an average ramp of 9% and a maximum of 14%, still a tough day though. 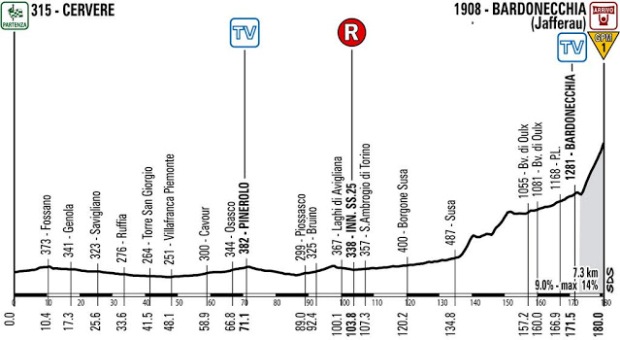 The 1st Attack of the Day!
After about half an hour the first group of hopefuls headed up the road, it included; Sonny Colbrelli (Bardiani Valvole-CSF Inox), Luca Paolini (Katusha), Matteo Trentin (Omega Pharma-Quick Step), Daniele Pietropolli (Lampre-Merida), Peter Stetina (Garmin-Sharp), Pieter Weening (Orica-GreenEdge) and Egoi Martinez (Euskaltel-Euskadi). Stetina, Weening and Martinez crashed to leave the other four to press on.

After 30 kilometres; Colbrelli, Paolini, Trentin and Pietropolli had 3:26 and by the 50 kilometre mark the lead was over 7 minutes. 10 kilometres farther on and the lead had gone out to 8 minutes as they approach Pinerolo and where the course has been changed. RAI Sport TV earlier showed the snow on the Col du Galibier and the gates closing the road to traffic (ROUTE BARRÉE) with danger of avalanche, so it’s not looking good for Sunday.

After 2 hours of racing the race had covered nearly 100 kilometres and the four leaders had 9 minutes. Astana and Cannondale had riders on the front; there wasn’t much of a chase. In the bunch there was a crash involving Alessandro Vanotti (Astana), Enrico Battaglin (Bardiani Valvole-CSF Inox) and Robinson Chalapud (Colombia), an ambulance was called and Vanotti and Battaglin abandoned. Reports were that Vanotti had spinal injuries and Battaglin had a broken collarbone. The Giro race organisers reported via Twitter that David Millar (Garmin-Sharp) had also retired.

The bad weather was affecting everything on the race, the heavy rain cut all the live TV and the riders were wearing every bit of available clothing. After 105 kilometres the lead for Colbrelli, Paolini, Trentin and Pietropolli was 9:50 and with 55 kilometres to go they topped 10 minutes. At this point a few teams started to aid the chase and the gap started to come down.

The Chase is On
Androni Giocattoli put riders on the front of the peloton and the lead was back to 9 minutes with 45 hard kilometres remaining as they hit the base of the climb to Bardonecchia before the final steep sections of the Jafferau.

The word coming through about Sunday’s stage is that the Col du Mont Cenis and the Galibier will not be climbed and the race will finish in Valloire. The stage will probably start in France and still climb the Col du Télégraphe.

Italian TV station RAI had lost all transmission with no planes or helicopters able to fly, snow had started to fall at the finish and the cloud closed in so even the cameras on the course were not much use. The organisers reported that the break were now at 7:50 with 40 kilometres to go.

Astana and Sky took control of the dwindling bunch and with 30 kilometres to the summit of the Jafferau the lead for Colbrelli, Paolini, Trentin and Pietropolli had been cut to 6:20. Sky was the strong team making the going hard and setting up Rigoberto Uran for another stage win? But at that moment it was anyone’s guess. Omega Pharma – Quick-Step are reporting that Mark Cavendish has been dropped.

The lead at 22 kilometres out was down to 5:30 and the visibility had cleared (slightly), TV could nearly see the last 200 metres to the line. 15 kilometres to go and Omega Pharma – Quick-Step’s Matteo Trentin was dropped from the break and was chasing at 47 seconds, the other three had 5 minutes.

Into the last 10K and Trentin was losing a lot of time on his own, over 1 minute to the leaders and the bunch had closed to 3:30 on him. Orica-GreenEdge DS; Julian Dean reported that the rain had stopped and riders were removing their jackets and it was “game on.”

The leaders hit the steep last 7 kilometres with 4:05 minute’s advantage and the finish area was cleared in anticipation of some action. At 5 kilometres Paolini and Colbrelli had dropped Pietropolli, although he got back to them as Sky’s Dario Cataldo rode tempo for Henao and Uran and around 30 chasers.

The last 5 kilometres had Paolini, Colbrelli and Pietropolli together, then Trentin at 2 minutes and the Maglia Rosa at 4 minutes. Reports were that Sergio Henao (Sky) and Diego Rosa (Androni Giocattoli) had attacked the chasers. Next to try was Cadel Evans (BMC), but the Pink jersey of Vincenzo Nibali (Astana) romped up the hill and was joined by Mauro Santambrogio (Vini Fantini-Selle Italia). 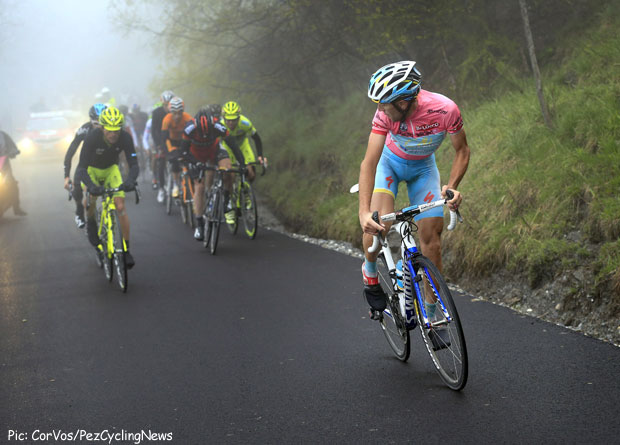 The first riders came out of the cloud and it was the Pink jersey on the wheel of Santambrogio. The escapees had been caught and passed, although Luca Paolini had looked like he could have hung on, but it was just too far.

Santambrogio led all the way to the line, Nibali either wouldn’t or couldn’t contest for the stage, but he has gained time on everyone else. Carlos Betancur (Ag2r-La Mondiale) was 3rd and Samu Sanchez (Euskaltel-Euskadi) was 4th. Obviously all the GC hopefuls (except Santambrogio) lost time: Uran 29 seconds, Evans 33 seconds, Intxausti 1:34, Scarponi 1:28 and Gesink over 4 minutes. 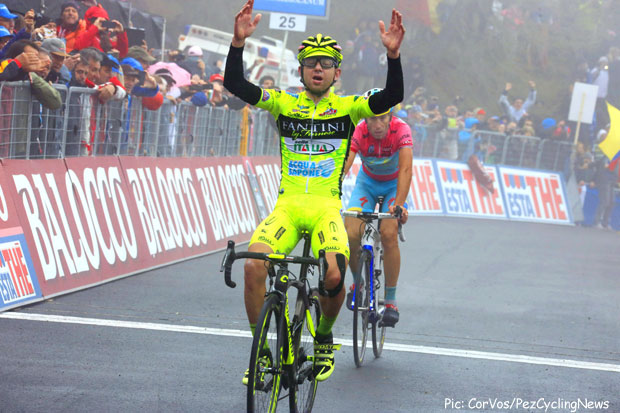 Keep it PEZ for tomorrow’s stage 15, if it goes ahead, the rumour is that it may be cancelled altogether!

And keep it to PEZ later today for when our photographers manage to fight their way through the snow and send us some photos. Our man Alessandro Federico was roadside again today after covering Milan San Remo earlier in the year – we might have to send him to the Tour of New Caledonia or something next to thaw the poor guy out!