No prizes for guessing which black-clad unit blasted to victory in the cronosquadre of this year’s Giro d’Italia. Yep, Wiggo’s Sky team produced a cracking ride over tricky terrain, but it’s one of their less heralded riders wearing the maglia rosa tonight. Elsewhere there were a few below-par rides from outfits who should have done better.

How It All Happened
It’s going to be a short, sharp effort today. Four little climbs in a 17.4km team time trial that rolls all the way. That’s because the island of Ischia, a little to the south-west of Naples, and sitting in the Tyrrhenian Sea, is basically just under twenty square miles of hills with about 60,000 residents jammed in between them and on the coast. 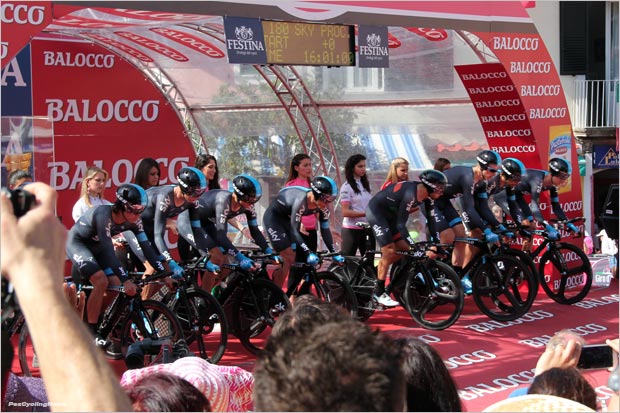 Team Sky’s start clock hits “0” and they are off.

There have been grumbles about the logistics of this stage: an early start, a ferry journey which won’t agree with all stomachs, set-up, lunch, a quick look at the corsa, warm-up, hammer round the TTT, load up and go back again. Not exactly the ideal start to a Grand Tour, and there are plenty of transfers still to come.

The route runs out of Ischia town and turns along the north coast, heading west. It cuts inland and south, but then turns sharply north again for the final kilometres to Forio and the finish.

A particularly lovely touch is the use of the traditional music of the area – Bon Scott-era AC/DC – which thunders out of the speakers as the teams leave the start ramp. Speaking of tradition, the Giro’s been here before, back in 1959 when Antonio Catalano mugged Jacques Anquetil in an ITT, by a whopping 52 seconds. Charly Gaul won overall that year.

Colombia-Coldesportes are off first, and even if this test might not suit them, their best days will come in weeks two and three of the race.

Clearly, the top guys early on are Sky who blaze through in 10.12 at the first checkpoint, and they keep that going all the way to post 22.07 at the finish. Dario Cataldo is first over the line with Wiggins, Uran and Henao. Salvatore Puccio is there, too. He could be in with a shout of pink tonight. 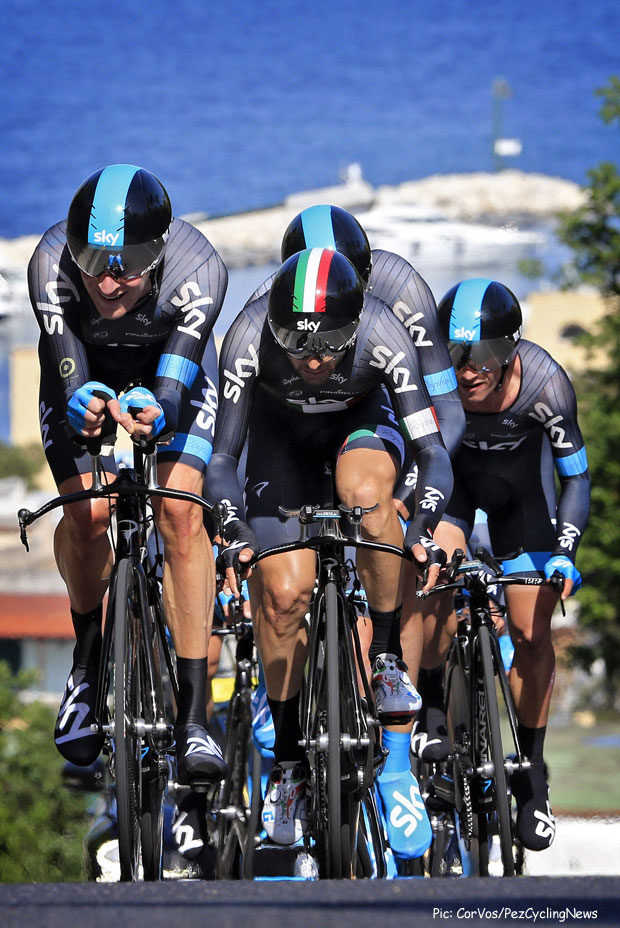 Blanco do a good ride and so Robert Gesink should be happy. Vini Fantini swoop out of the tunnel near the finish and roll through in provisional second behind the Sky juggernaut, which is a very tidy and surprising bit of work.

Astana riders cross themselves, probably to prepare to have their DS Guiseppe Martinelli screaming into their ears about how they compare to Sky.

Movistar are off and flying, faster than Sky at 7.9kms, with British TT champion Alex Dowsett doing a power of work. 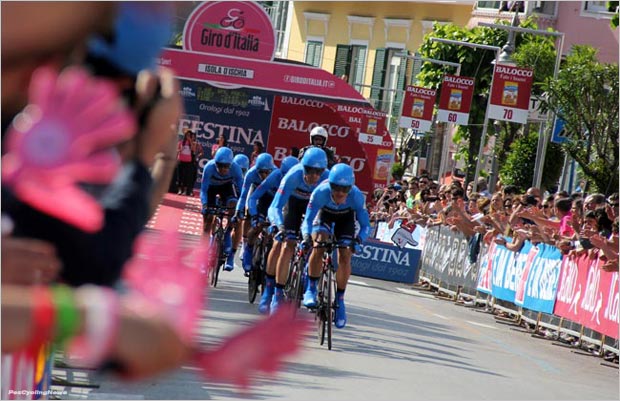 Garmin-Sharp are away now, in a line-up loaded with against-the-clock talent: Hesjedal, Millar, Dekker and the likes.

Lampre-Merida are already down to five riders, and they’ve still got about three kilometres to ride and they’re having to ease it back because man five is dangling off the back.

This course looks like it is harder than previously thought, and a lot of teams are getting caught out. Euskaltel tootle to the line as the first four men have long lost their fifth guy: lots of looking over shoulders as man five comes in a good ten seconds after his mates. They don’t even pedal the last 300 meters.

Orica-GreenEdge have a lot of horsepower and they follow a similarly stacked BMC out of the gate. Incredibly, despite what looked shambolic, Lampre actually post a provisional fourth so decent for Scarponi.

Say what you want about Mark Cavendish, and plenty do, the man knows how to bang out a big ride in a Team Time Trial. He’s got a pretty fabulous record in these events. He’s resplendent in pink skinsuit colors, right in the center of his OmegaPharma-QuickStep team.

Movistar post a cracking ride, despite fading a little to second behind Sky; they avoid a dropped Lampre rider who is meandering along the finishing straight ahead of them.

Astana have six men as they fly into the tunnel and onto the last turn. It’s a good ride and Nibali has only dropped 14 seconds on Wiggins. Back down the course, and both BMC and Garmin are down on what we’d expect. So, too, way down in provisional 18th, are Cavendish’s OmegaPharma boys – not looking good.

Garmin-Sharp scream downhill to the red kite and they’re looking a little ragged, posting seventh. Not great, but not catastrophic either for the defending champion Hesjedal. BMC drop 37 seconds which is not good for a squad with such power in the TT.

Orica-GreenEdge have gone eighth. Just Cavendish’s boys out on course now. They’ve got eight guys together, but they don’t seem to be going particularly quick. It’s a very disappointing 17th out of 23 teams.

Sky romp it, and Puccio is indeed the new leader. He looks totally bamboozled by the experience. Probably not helped by being utterly doused by his team-mates who indulge in a wild spraying of celebratory beverage on the winners’ podium. 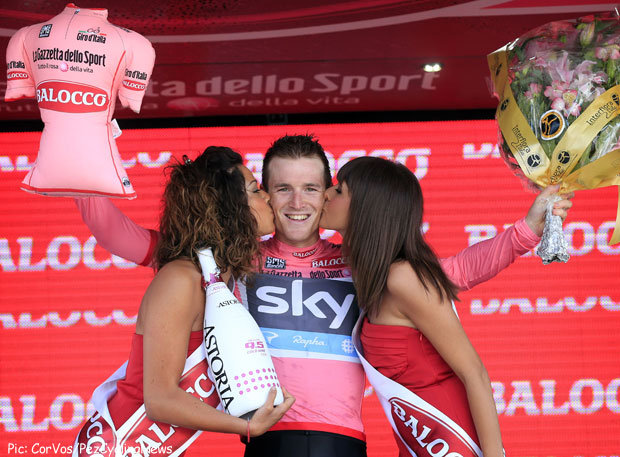 Keep it tuned for the Pez’s adventures in Italia!