Race Report: Vincenzo Nibali showed today that he is the worthy winner of the 2013 Giro d’Italia with a demolishing ride on the steep slopes of the Dolomites. His pink jersey gleamed through the falling snow at the top of the Tre Cime di Lavaredo for the stage win and confirmation of his superb home victory. Another great day on a brilliant Giro d’Italia.

After yesterday’s extra rest day, today’s stage did take place, although not on the original route (see map). The course is now from Silandro and will finish on the Tre Cime di Lavaredo after 210 kilometres, with the climb of the Tre Croci coming after 196 kilometres. The summit finish of the Tre Cime di Lavaredo at 2304 meters altitude is now the Cime Coppi as the highest climb in this year’s Giro. Most of the stage will be through the valleys that lead to the final climb, but the temperature at the finish was near freezing with some snow in the air. The race organisers have promised to keep the climb clear of snow. 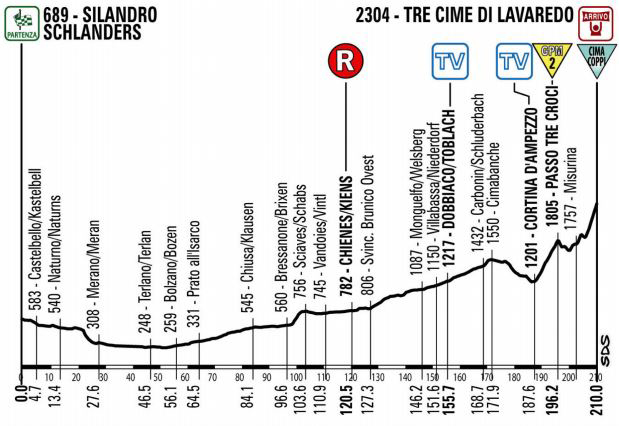 The Early Action
We didn’t have long to wait for the first attack of the day as Emanuele Ermeti (Androni Giocattoli), Yaroslav Popovych (RadioShack Leopard), Adam Hansen (Lotto Belisol) and Pavel Brutt (Katusha) headed off from the gun and after 35 kilometres they had 1:10 and then after 60 kilometres, through Bolzano/Bolzen, they had over 6 minutes. Euskaltel-Euskadi and Omega Pharma – Quick-Step rode tempo on the front of the bunch.

Popovych and Hansen both dropped back to their cars leaving Ermeti and Brutt to ride on, but the four escapees soon got back together to forge ahead and as the road started to rise at Prato all’Isarco after 65 kilometres the lead was over 8 minutes.

Basically from this point the stage is all uphill, apart from a short descent from Cimabanche after 172 kilometres to Cortina d’Ampezzo where the climb of the Passo Tre Croci begins and from there it’s straight on to the Tre Cime di Lavaredo. The Tre Croci climbs 604 metres and the Tre Cime di Lavaredo is about 600 metres. But the lowest point of the course is at 248 metres and the highest is 2304 metres, so it’s a hard race whatever way you look at it.

120 kilometres to go and the four up front had 7:40 on the Euskaltel-Euskadi led peloton. All the top riders had their team up front, Astana just behind Euskaltel-Euskadi with BMC not far away. Lampre-Merida will want to try something later with their men Michele Scarponi and Przemyslaw Niemiec Poised just off the podium. The big battle should be between Cadel Evans and Sky’s Rigoberto Uran for second place, as the Colombian is only 10 seconds behind the Australian.

Euskaltel-Euskadi had been riding on the front since the break went up the road, Samuel Sanchez was in great form in the mountain time trial, this morning he was in 10th place overall at 9:34 and needed 1 minute to move over Beñat Intxausti (Movistar) and 2 to pass Mauro Santambrogio (Vini Fantini-Selle Italia) in 8th.

100 K’s To go!
The lead had stabilized at around 7 minutes as the leaders passed through Vandoies/Vintl with 100 kilometres to go. After 3 hours of racing there was 85 kilometres to go and the lead had dropped to 5:40 as the leaders went through the feed zone in Chienes/Kiens. Euskaltel-Euskadi were still doing the riding on the front and no one seemed to know why, Vincenzo Nibali, the Pink jersey came forward to ask why and also a conversation between Movistar’s Pablo Lastras and Katusha’s Luca Paolini didn’t seem to bring any clarity to the situation.

74 kilometres to go and nothing much had changed, except the lead had grown to 7:03 due the bunch slowing for the feed, the orange jerseys of Euskaltel-Euskadi were still on the front.

Coming into the last 60 kilometres, Colombia and Ag2r-La Mondiale started to give a helping hand to the Basque team, but the lead was still over 6 minutes, the road was climbing through small villages with a distinctly Austrian look and it wouldn’t be long before some tired legs would be seen out of the back of the peloton.

At the intermediate sprint in Dobbiaco/Toblach after 120 kilometres; Pavel Brutt was first through, but the leaders didn’t contest the sprint. Back in the peloton; the point’s leader Mark Cavendish moved forward on a team mates wheel to take 5th, but he was challenged by Raphael Andriato of Vini Fantini-Selle Italia which didn’t go down well with anyone at OPQS and he was duly castigated by Matteo Trentin.

The Last Important 50K’s of The Giro ‘13
5:12 was the gap at this point and the lead was starting to drop. According to RAI commentator Davide Cassani: “no chance for the break. The war will start in Cortina.” As the race worked its way higher there was more and more snow at the road side, further up the snow was made into high walls above the heads of the riders.

Cannondale moved to the front of the peloton at the race entered the final 30 kilometres, the lead was down to 3 minutes and the speed had visibly risen. Ermeti was the keenest on the short descent to Cortina and distanced the others on some of the tighter bends, but they were all together coming to the second intermediate sprint as the rain started to fall.

Popovytch wanted to get to the start of the climb first and slipped away through the town and was first at the sprint on slippery, wet cobbles. He was followed by Brutt, Hansen and Ermeti in that order. Cannondale kept the speed high into town and then Mark Cavendish took to the front for the points for 5th place.

The break fell apart as Pavel Brutt rode away from the others, while at the back of the peloton Carlos Betancur (Ag2r-La Mondiale) needed a rear wheel and needed four team mates to bring him back to the Pink jersey group, they nearly made it and then the speed lifted. Pieter Weening (Orica-GreenEdge) attacked the chase group which had shrunk to around 30 riders.

Euskaltel-Euskadi had one rider (Verdugo) leading the chase with Astana behind him, all the GC riders were there as Betancur managed to catch them. The mountain jersey of Stefano Pirazzi (Bardiani Valvole-CSF Inox) jumped away with Darwin Atapuma (Colombia) on his wheel; the little Colombian came off his wheel and headed off higher on his own.

Betancur had to change bikes and Saxo-Tinkoff put pressure on the front to make sure he had a hard time to get back up again.

At the top of the steep Tre Croci, Brutt was first with Weening next at 26 seconds and Pirazzi third and the peloton just behind him as Atapuma had been caught. Gianluca Brambilla (Omega Pharma – Quick-Step) jumped across to Weening and they were joined by Movistar’s Eros Capecchi for them in turn to catch the very tired Pavel Brutt. Atapuma jumped again to catch Pirazzi who was still hanging out just in front of the Pink jersey group.

At the start of the Tre Cima di Lavaredo; Capecchi rode away from Weening and Brambilla with Atapuma and now Robert Kiserlovski (RadioShack Leopard) struggling to stay away from the chasers who were not far behind being paced by Astana. Pirazzi had cracked again and was swallowed up.

As they hit the steepest part of the climb; Vincenzo Nibali attacked with team mate Tanel Kangert with him. The others have to push hard to pull him back, Cadel Evans (BMC) couldn’t hold on as Nibali attacked again. This time Nibali rode past Capecchi as Rigoberto Uran and Carlos Betancur were the only riders to stay close enough to see Nibali fly away. 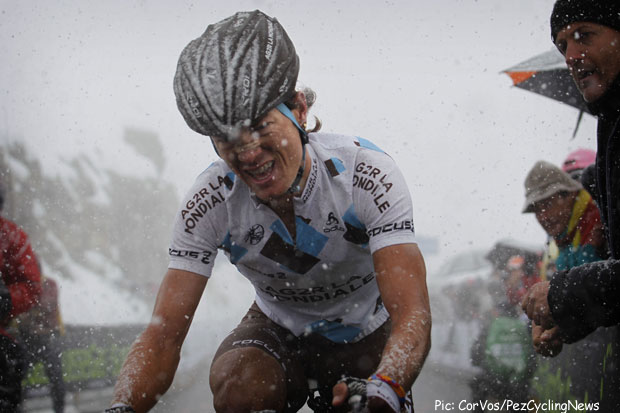 When they hit the 18% section everyone was in trouble, Nibali got out of the saddle and kept his momentum going, Betancur and Uran rode side by side as Evans made his last effort to get back to Uran and hold his 2nd place overall with Atapuma for company.

The fans were all over Nibali, he had to warn them off. Evans could not catch Uran, Betancur and Duarte and could only see his overall place slip away. 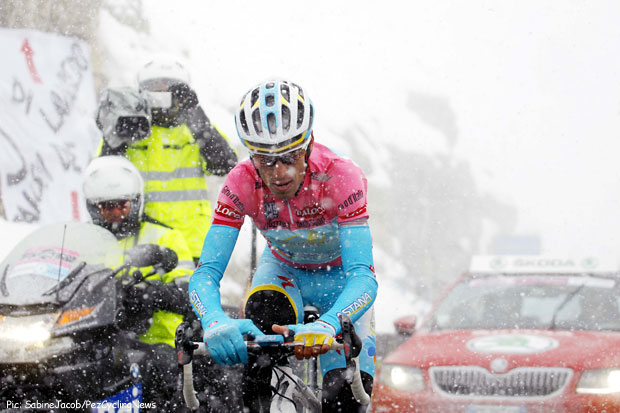 Vincenzo Nibali was majestic over the last steep metres of the Tre Cima di Lavaredo, he was in the red zone but moving faster through the snow storm than the others. The victorious Italian crossed the line with one cold arm held high. The others stumbled across the line and the result of the overall podium was down to the clock, Uran was more than 10 seconds ahead of Evans, but the Australian held off Scarponi to keep his third place. Betancur put himself back into the young rider’s jersey and Fabio Duarte was second on the stage for three Colombians in the top four places on the stage. Nibali also took the Red points jersey from Mark Cavendish.

Today was one of the hardest days in the saddle for many riders and maybe the climb should have been cancelled, but it was great sport in the mold of times gone by. Nibali’s ride was one of great courage and strength, but today all the riders in this race were heroes.

Keep it PEZ for all the excitement from Italy.

Giro di Pez: In the Blizzard!