Race Report: Katusha powerhouse Maxim Belkov nailed the biggest win of his career today, proving that sometimes a crazy-looking breakaway can make it all the way to the line. Back down the road though, there were favorites in trouble. Here’s how it went down …

We’re off into the hills again today, with four classified climbs on the menu. It’s one of those days that can cause havoc with the legs, the lungs … and the mind. It’s been hard enough this first week with narrow roads, bad weather, crashes. Now more hills and rain to endure before the rest day. Oh, hell … 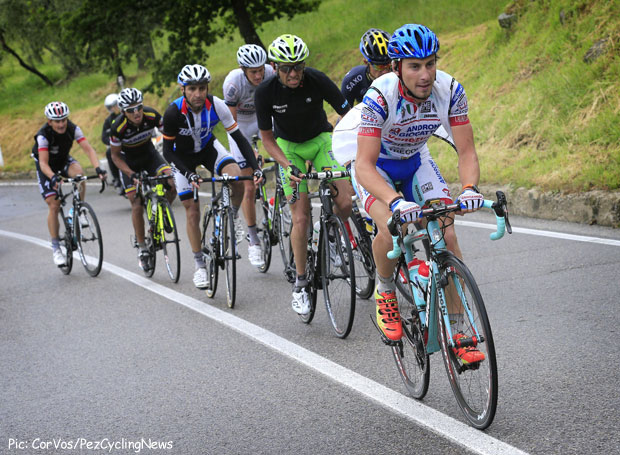 They hit the category-two Passo della Consuma around half-distance with just under three minutes – the peloton is keeping an eye on them – and Pirazzi and Chalapud jump away. The Italian pushes it harder to take the points, and then Belkov jumps across as the gap goes out beyond five minutes.

Pirazzi and Chalapud are having a bit of a ding-dong and the Italian again takes the points on the Vallombrosa as we hit 65kms to race. They’re almost a minute clear of Belkov now. Meanwhile, back in the peloton, things are relatively quiet, with Astana doing what they need to. Pirazzi was heading towards the virtual lead at one point, so he needed to be policed.

On the descent, Belkov simply plummets, catches the front duo and motors away. Chalapud and Pirazzi are pursuing, but the remainder of that early break is smashed across the road.

Now, 40kms to go, and Belkov has well over a minute on his chasers and almost seven on the peloton. In the peloton, Wiggins is in trouble again, 40 seconds off the back. 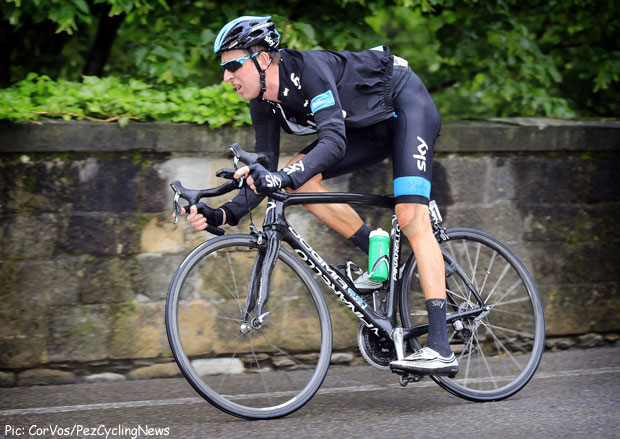 24kms to go: Tanel Kangert, the Estonian champion plods on like a metronome, and maybe that steady tempo has helped Wiggins regain contact. The Brit cruises along in the group, looking a lot more comfortable

Pantano is stripping the seconds off Maxim Belkov’s gap, drawing closer to the grimacing Russian, but the Katusha man clears the summit of the Vetta le Croci alone.

Belkov is now on the Fiesole, a little beast which will be a feature of the upcoming World Championships, and its the final climb of the day. Pantano has been joined in the chase by Ludvigsson, which is a brilliant ride by the young Swede.

Astana and Lampre-Merida fly under the 15kms banner and they are exactly 3’30” behind Belkov. Sky’s natty blue-stripe-on-black rain jackets are visible in greater numbers, trying to keep Wiggins safe.

Evans is impassively in Nibali’s wheel. Scarponi is there, too. BUT … defending champion Hesjedal is being dropped, slowly but surely. He has Danielson with him.

Ten clicks to go, and Belkov is really hurting now. He takes the mountains points to a huge cheer, and settles into attacking the descent. Ludvigsson and Pantano are 1’19” behind at the top.

Ag2r’s Betancourt has launched and is flying up the Fiesole. The big boys are only about two minutes back and they hit the drop; the road snakes in and out under the beautiful trees in leaf. Again, Wiggins is in the wrong place, hanging two or three from the back of the group; he’s not up with
Nibali an Scarponi. 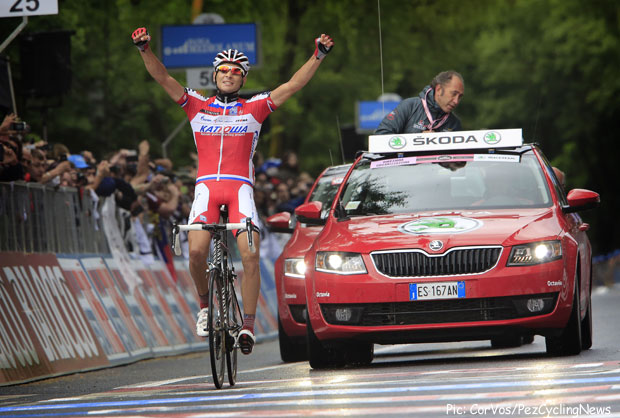 Camera flashes light up Belkov’s figure as he sails through the soaking Florence streets. The big Russian motor is purring now, as the line gets
closer. He gets out of the saddle for the last little ramp to the finish. He has all the time in the world to raise his arms for his biggest career win. Nicely done.

Betancour catches and passes first Ludvigsson and then Pantano to get second. Only he thinks he’s won it, crossing himself and celebrating unnecessarily. Ooops. 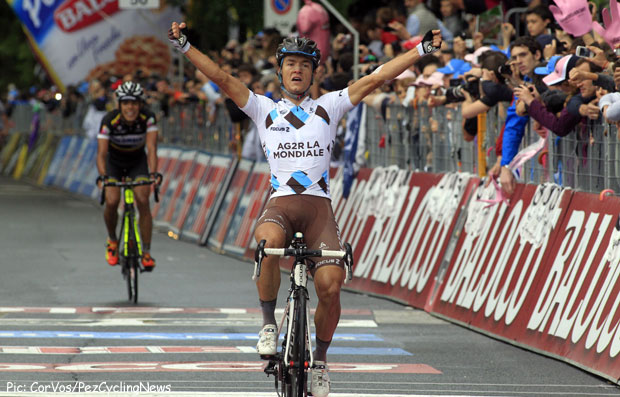 The field is only a minute or so back, and Wiggins has survived … but Hesjedal hasn’t. He’s lost another minute and tumbles out of the top ten overall, which Nibali still leads from Evans.

Cracking stuff again at the Giro. Keep it Pez for all the latest from the roadside!