Race Report: Brutal weather and three huge mountains made for an epic day that saw Nairo Quintana & Ryder Hesjedal duel to the Val Martello summit finish, and the Columbian take over the maglia rosa. It was another crazy day in the Italian mountains, snow, freezing temperatures and more, but action aplenty!

It’s a Colombian Giro d’Italia this year. This morning Rigoberto Uran was in pink but after a full day of excitement his countryman Nairo Quintana fought through the snow to wear the jersey tonight.

The weather looked like it was going to be the biggest battle for the riders today then as the skies cleared the mountains were the biggest obstacle. In the end it was a little Colombian by the name of Nairo Quintana who took the race by the scruff of the neck and gave it a good shake. At the base of the Stelvio; Quintana, Pierre Rolland and Ryder Hesjedal had a gap on the pink jersey group of Rigoberto Uran and that was the last the other GC men saw of the Colombian. After a thrilling duel with the Canadian – on a mission to claw his way back into a respectable gc placing – the stage went to Quintana and so did the overall and the young jersey competitions. 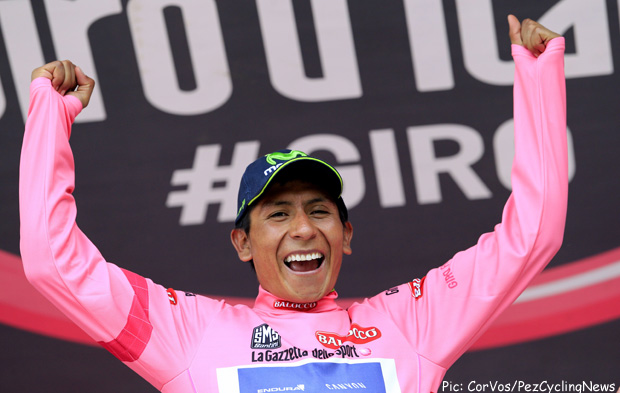 Ponte di Legno to Val Martello/Martelltal, 139 km
Today’s stage has to be the 2014 Giro’s Queen stage, although Thursdays stage to the Refugio Panarotta and Saturday’s Zoncolan stage will be no walk in the park either. From the start in Ponte di Legno the course drops for 5 kilometres till it hits the 18 kilometre long Passo Gavia (Cat 1, 2618 metres). The descent to Bormio is 25.7 K’s long and then its immediately time for the Passo dello Stelvio (Cat Cima Coppi, 2758 metres) with its summit after 70.3 kilometres. The Stelvio being the highest point in this year’s Giro is the Cima Coppi. The very long descent, passing through the special sprint, hits the lowest point of the day in Coldrano/Goldrain at the base of the final climb.

The summit finish to Val Martello/Martelltal (Cat 1, 2059 metres): 22.4 kilometres long with many points exceeding 10%, alternating, on the lower slopes, with short downhill sections, and a stretch of false flat beside the artificial lake 5 km from the finish. The final hairpins inside the last kilometre have a max. gradient of 14%. Very hard might not cover how difficult this course is. 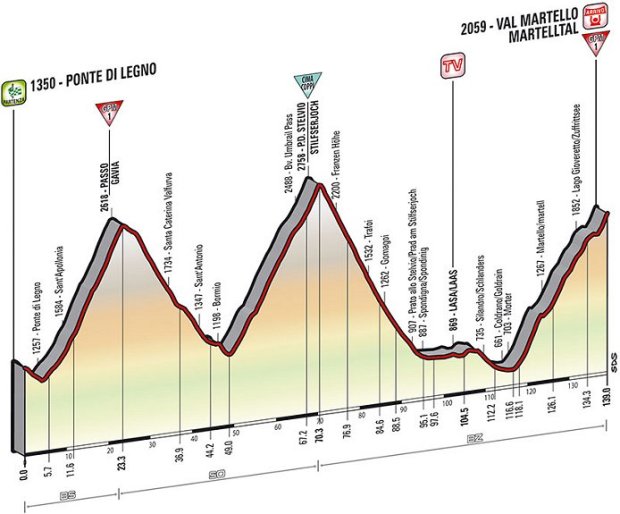 The Start
As the riders lined up there was a little rain in the air and they were all well wrapped up against the cold conditions, Sky’s Edvald Boasson Hagen was missing, the first casualty of the day. Overall leader Rigoberto Uran (Omega Pharma – Quick-Step) was talking to many of the riders at the start as no one looks too keen on racing, but in the end it was business as usual and they headed off into the unknown. Mountains, rain, cold and possible snow were on the menu.

The Passo Gavia
The peloton hit the base of the climb together and the rain had stopped, but the temperature was freezing. After more than half an hour into the stage it was looking like the start line discussions must have been for a truce to be called…for a little while anyway.

First attack came from Colombia’s Robinson Chalapud, behind him Movistar put four riders on the front with King of the Mountains leader Julian Arredondo (Trek) amongst them. The speed at this point was far from full on, but riders were being dropped. 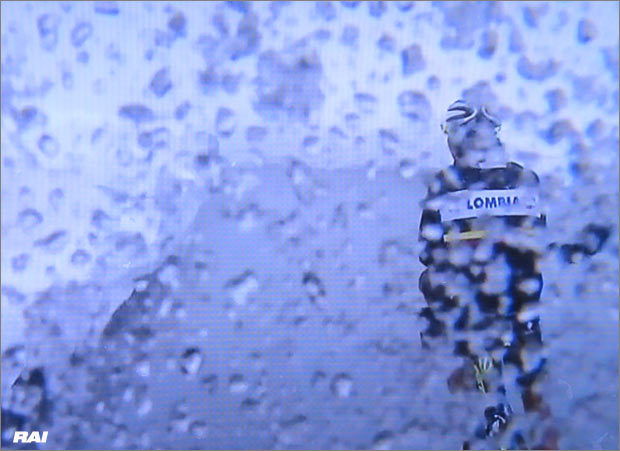 The camera’s view on the Gavia says it all.

Chalapud could not be seen by the peloton due to the thick, freezing fog and he built up a nice lead before hitting the steepest parts of the climb 20 kilometres after the start. Arredondo attacked out of the bunch and was joined by another Colombian; Jarlinson Pantano. At the top (115.7 to go) Chalapud came over the line through a dusting of snow, Arredondo was next at 49 seconds with Pantano on his wheel. Katusha’s Alberto Losada had been trying to cross, but didn’t make it before the summit.

The descent was wet and cold and Chalapud took no chances though the banks of snow at the roadside. Behind him a small group had formed with Pantano who was joined by Diego Rosa (Androni Giocattoli) and Ben Swift (Sky), Arrendondo had sat up. Cadel Evans (BMC) and Domenico Pozzovivo (Ag2r-La Mondiale) were in a group off the back..

100 K’s to Go
Franco Pellizotti (Androti Giocattoli) came past everyone to go into the lead through Sant’Antonio, he was eventually joined by Dario Cataldo (Sky)and Alexis Vuillermoz (Ag2r-La Mondiale) with a chase group behind them and the peloton 2:38 later with the Evans/Pozzovivo group rejoined. 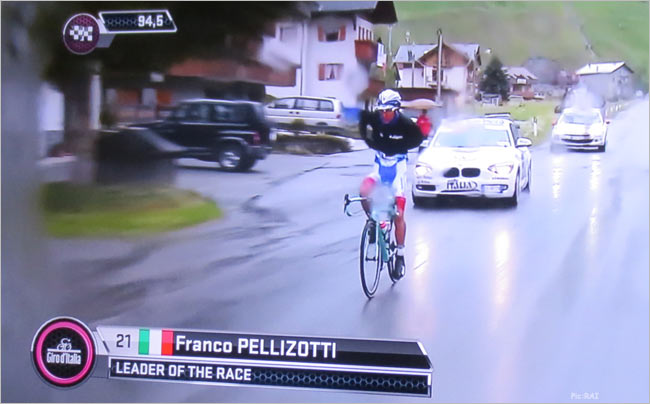 The Stelvio
Things settled down a little as the race tackled the Stelvio, up front we had: Franco Pellizotti & Diego Rosa (Androni Giocattoli), Dario Cataldo (Sky), Alexis Vuillermoz, Robinson Chalapud & Jarlinson Pantano (Colombia), Robert Kiserlovski (Trek), Przemyslaw Niemiec (Lampre-Merida) and Hubert Dupont (Ag2r-La Mondiale), with the Movistar led bunch 2:24 behind. Alexandre Geniez (FDJ.fr) was between the two groups and was making a good go at it.

The climb was a long grind for everyone as the rain became heavier; Geniez was slowly making his way towards the lead group and managed to catch them 9 kilometres from the top of the Cima Coppi. The pink jersey group was down to about 30 riders with all the GC men present.

Tinkoff-Saxo was next to put riders to the fore, again just to keep the pace steady, but it did put Thomas de Gendt and Serge Pauwels in trouble. The lead came down to under 1:30 with 75 kilometres to go.

The speed in the bunch visibly lifted and the lead came down to 10 seconds with 5 kilometres to the top. Dario Cataldo could see the situation and jumped from the group as the snow started to fall and the conditions were becoming worse. Talk in the race was that the descent would be neutralised, but no one knew how that would work.

The peloton swallowed up most of the riders from the break with a group of four chasing Cataldo, but they were only ahead of the peloton by a few seconds.

At the top Cataldo was first followed by Chalapud and then Dupont, with the main bunch at 1:58. Ivan Basso was heard to be nearly five minutes down.

The race dropped into the Provincia di Bolsano, or as it is a German speaking area Bozen, and with 60 kilometres to go and 3 hours ridden; Cataldo was dropping like a stone and put a load of time into the chasers (over 3 minutes) as any talk of neutralising the descent didn’t seem to happen. Dupont, Vuillermoz and Pantano were still in between.

Into the valley and (42 kms to go) Cataldo had 44 seconds on the three chasers. Then there was a second chase group of Nairo Quintana, Pierre Rolland and Ryder Hesjedal (Garmin-Sharp) with Sicard and Izaguirri working for their Europcar and Movistar leaders, plus Matteo Rabottini (Neri Sottoli) along for the ride. Race radio was saying that the pink jersey of Rigoberto Uran was a further 2 minutes down with Evans and Aru.

Uran was not stranded on his own though and had two riders with him powering the chase.

Cataldo took the special sprint in Lasa with 34.5 kilometres to go, the Dupont, Vuillermoz, Pantano group were at 1:02, then Quintana, Hesjedal and Rolland at 1:44. The Uran group was at 3:18.

The Val Martello/Martelltal
Sky’s Dario Cataldo was riding strong at the base of the climb as the two chase groups got together behind him, now there were eight riders between Cataldo and Uran as Sicard had been dropped.

20 kilometres to go and Cataldo had 1:25 on the Quintana group and 3:07 on Uran, Evans and others. The jackets, leg and arm warmers were all jettisoned and everyone was ready for the final action.

Quintana and Rolland pressed on a little in the group which put Hesjedal and the others in trouble, Quintana eased allowing Hesjedal to close up, but another effort and the Canadian was gone. 17.7 km to go and Cataldo was caught and Hesjedal got back on and the lead on Uran was 1:47.

Quintana and Rolland lifted the pace slightly and again Hesjedal lost the wheel, but again closed up with Cataldo clinging on.

Rigoberto Uran had no team mates, but Astana and Tinkoff-Saxo had their riders for Aru and Majka doing the work, but the lead was still 1:43 and Cataldo was dropped. Pozzovivo now had Dupont and Vuillermoz with him for help and were the team with the biggest presence in the chase group.

Under the power of Nairo Quintana the gap lengthened to 2:07 for the Colombian with Rolland and Hesjedal holding on. 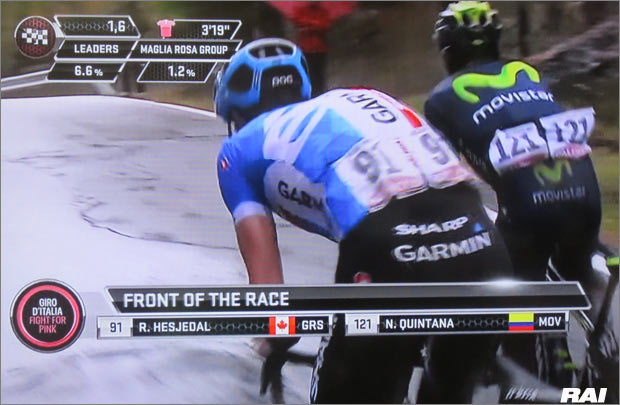 10 Tough K’s to Go
The gap was 2:26 to the Maglia Rosa group for the Colombian/French/Canadian leaders over the Mick Rogers powered chase, this put Quintana 5 seconds off the overall lead and also brought Rolland into the top five and Hesjedal in to eight.

7.5 kilometres to the line and Quintana could not hold back any longer and headed off on his own, but the road flattened out and Rolland and Hesjedal closed his move down. Rogers could chase no more and Uran was forced to take the lead with Belkin’s Wilco Kelderman at his shoulder. Majka came forward putting Evans out the back.

On a steep section Quintana presses hard and only Hesjedal could hold on and the hopes of Rolland were over.

Pozzovivo, Kelderman, Majka, Uran, Aru and Henao had a gap on Evans and the others.

Quintana was virtual leader on the road with 2 kilometres to go and Hesjedal came through to take a turn on a flat piece of road.

Kelderman attacked the group and no one could go with him. 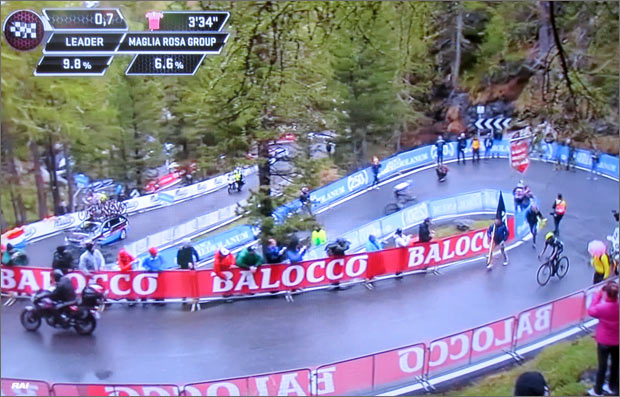 Up front Quintana hit the steep last kilometre and Hesjedal could not follow into the eight hair-pin bends to the finish. The twists and turns kicked up to a frightening degree, but the little Colombian pushed on as though he was on an easy ride to the shops. The bends reared up, but he didn’t miss a beat as he put more time into his countryman Rigoberto Uran. Onto the 14% section and he sprinted out of the saddle to make the most of every second possible. Stage and pink for Quintana and Movistar. 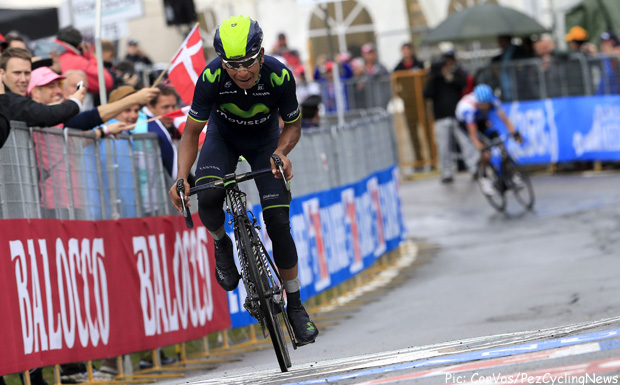 Hesjedal wasn’t too far behind and Rolland was just over a minute later. Kelderman next at 3:31 ahead of the two Italian hopes; Pozzovivo and Aru. Henao was leading Uran up the last corners just behind Majka, but the Omega Pharma – Quick-Step rider was 4:11 back. Evans was at 4:48.

It was on the cards that Nairo Quintana was going to attack and today was the day. Is the 2014 Giro d’Italia over? Not yet, there could still be an upset in Italy as the mountainous last week continues.

Keep it PEZ for all the Giro action.