Giro'14 St.17: After yesterday's brutal ride through the mountains and weather, the bunch was happy to let the break go and use the stage for recovery.

Race Report: The peloton took a day off after the recent mountain efforts and let a big group head off up the road where it was Stefano Pirazzi who won Bardiani’s third stage of this year’s Giro. Today was the calm after and before the storm…

Not the most exciting of days in Italy, but in the end the break spiced things up with some well timed attacking. From the twenty-six rider group, De Gendt, Pirazzi, Montaguti, McCarthy and Wellens escaped in the last 20 kilometres and Stefano Pirazzi jumped away to solo the last kilometre to the line. It was a very happy Pirazzi in Vittorio Venito. 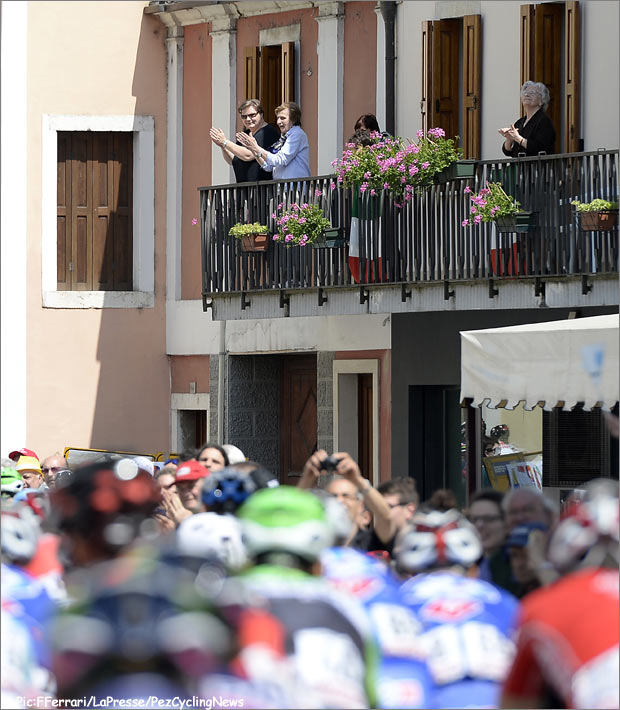 Sarnonico to Vittorio Veneto, 205 km
After yesterday’s excitement today’s stage was a rest day for some. From Sarnonico the course drops down to Trento and then follows a lumpy route Vittorio Veneto. There are three Cat 4 climbs: Fasto-Scale di Primplano after 107.8 kilometres, the Santo Stefano 159.4 kilometres and the Muro di Ca’del Poggio 20 kilometres before the finish. The final kilometres: mainly flat or on the slightest of ascents. After the last curve, the final straight is 450 metres long and 8 metres wide, on asphalt. 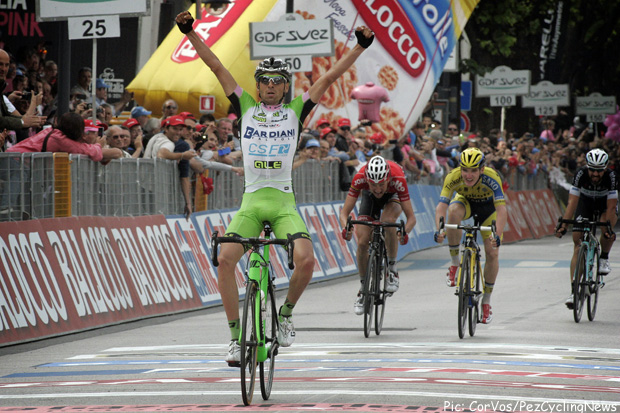 Before the start there was talk of a protest over yesterdays happenings, but after a directeur sportif’s meeting and talks with the UCI, everything started as normal. At the sign-on podium there were smiles all round and most riders shook the hand of the new overall leader; Nairo Quintana. 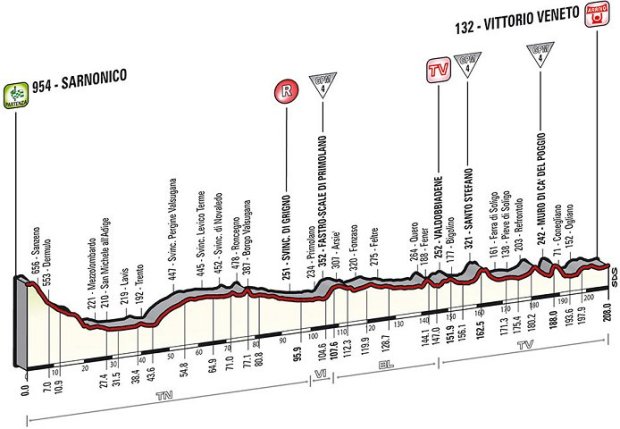 The Start
Due to the course being mostly downhill the average speed for the first hour was over 50 kph and no breaks were able to escape. Thomas De Gendt (Omega Pharma – Quick-Step) and Jos Van Emden (Belkin) attacked after about 80 kilometres of racing and were eventually joined by Daniel Oss (BMC). This caused a reaction in the bunch and a large group set off after the three.

Coming to the end of the first 100 Kilometres their lead was up to 6 minutes with Marco Frapporti (Androni Giocattoli) trying to catch them as Androni had missed the break. He eventually made it to give us 26 riders away. 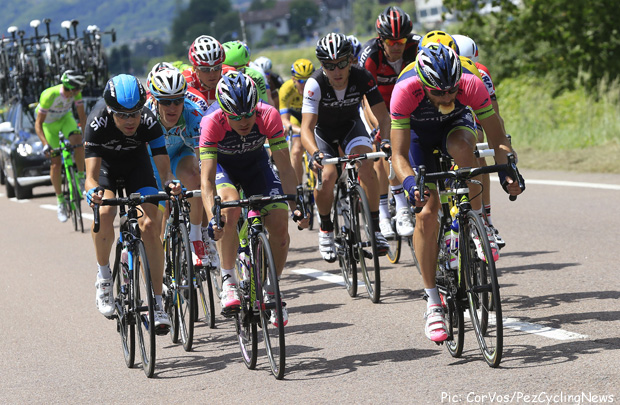 With 90 kilometres to go the break had 8 minutes in hand, but the lead just kept getting bigger. There was no one in the front group that was any danger overall, in fact they could allow it 48 minutes before Lampre-Merida’s Damiano Cunego would be in the pink jersey. Movistar were on the front of the peloton, but the chase was a bit half hearted.

70 kilometres to go and the lead hit 11 minutes.

Moving from the province of Belluno and into Treviso, with 60 kilometres to go, the lead rose to over 12 minutes. Through the Special Sprint in Valdobbiadene it was Tim Wellens (Lotto Belisol) who jumped away, but no one was interested and he crossed the line first with ease. 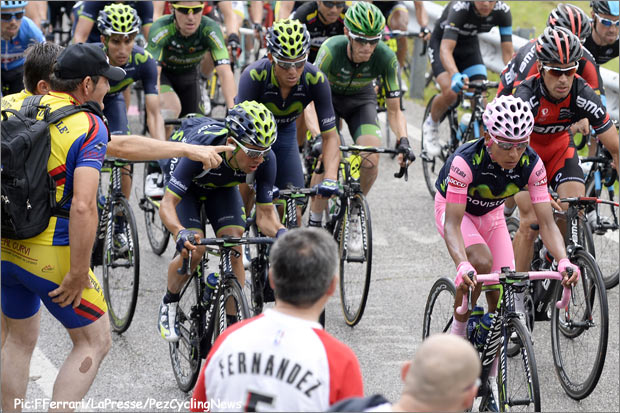 On the second Cat 4 climb of the day, Santo Stefano, the lead was still over 11 minutes. Thomas De Gendt led at the bottom, but again it was Lotto Belisol man Tim Wellens who jumped away early to take the points with Davide Malacarne (Europcar) just behind him. This moved Wellens into third place on the KOM competition, but he was still 30 point behind Julian Arredondo of Trek.

Just after passing the 30 kilometres to go banner, Thomas De Gendt attacked, Pirazzi jumped after him and then Oss went after them. Jussi Veikkanen was next to go as soon as the others failed to catch De Gendt. Petrov pulled the Finnish champion back and De Gendt had a gap of 20 seconds at the 25 kilometres to go mark. 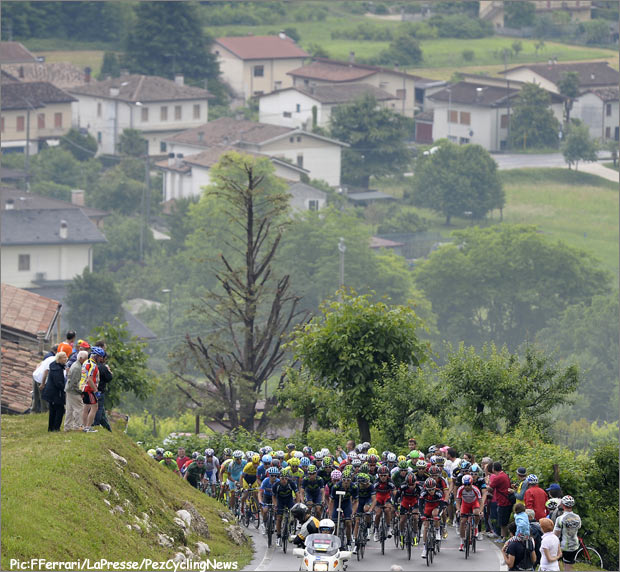 The rain started to fall and three riders at the back of the break slid to the ground; Vorganov was first and then Le Bon and Frapporti joined him. All three were fairly quick to get up.

Up the Muro di Ca’del Poggio and De Gendt was over the top of the little climb with an advantage of 2 seconds over Pirazzi and a handful over the others with Gatto leading. 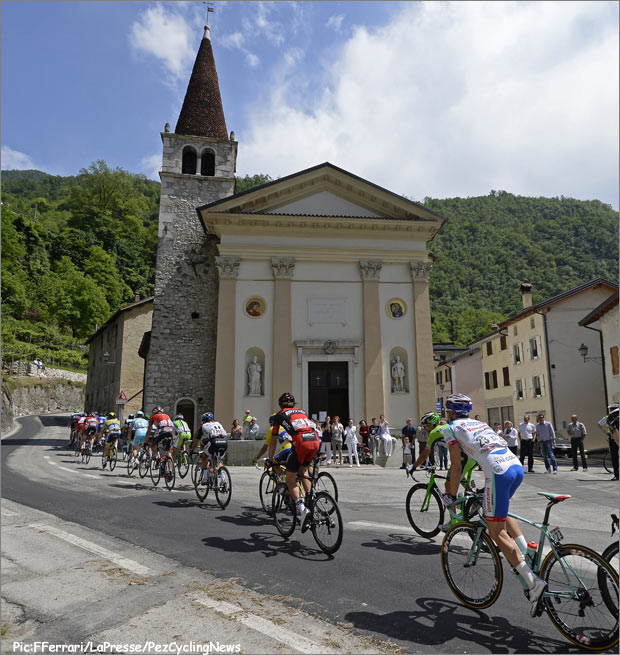 20 to go to the Finish
Pirazzi and De Gendt got together on the little descent as behind the others were slipping off on the corners. The lead for the two up front was around 20 seconds and the peloton were still at 12 minutes.

Thomas De Gendt and Pirazzi were joined by Montaguti, McCarthy and Wellens. Sky’s Deignan jumped from the others to cross on his own, but he was pulled back. 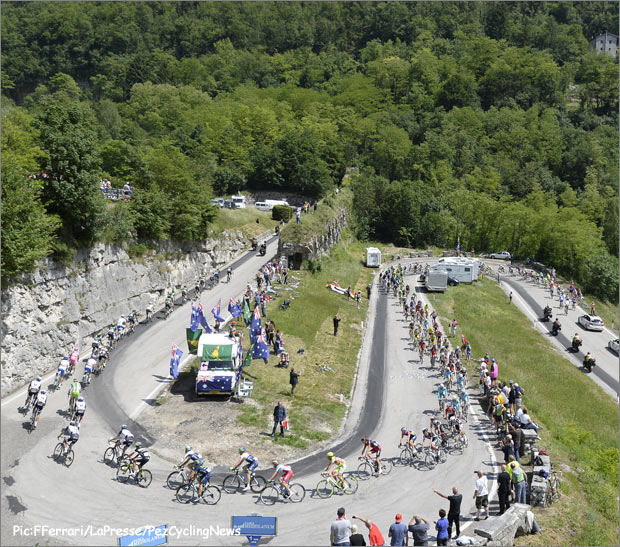 The Last 10 Kilometres
De Gendt, Pirazzi, Montaguti, McCarthy and Wellens had only 23 seconds, but the chase was being split by continuous attacks. Five to go and local boy; Boem jumped up after Felline of Trek who had been trying to cross. The peloton were now at 15 minutes.

Boem and Felline were joined by the third Bardiani rider; Canola with Van Emden in tow.

On the run-in to the finish the five leaders were looking behind, but they had nothing to worry about and would be fighting it out for the win. As the speed eased; Pirazzi made a big attack at 1.2 K’s out and the others looked at each other to chase. Wellens and then De Gendt made the effort, but they had left it too late. Round the last bend and Pirazzi had 10 metres on the others with 200 metres to go.

Pirazzi didn’t look back but put his head down and sprinted for all his worth to hold them off with enough time for the two arm salute as he crossed the line and then with tears of joy after. Wellens got the better of the McCarthy and the others. Veikkanen brought the next group home with his arms in the air, surely he didn’t think he had won the stage.

Stage winner Stefano Pirazzi said after the stage: “I knew it would be difficult to win from a big group. We are all young guys at Bardiani and we have done really well in this Giro and we can be very proud of ourselves.”

The peloton came in 15:42 down, but it wasn’t important as there were no changes in the GC standings for the battle for pink – although that will change tomorrow with another summit finish.

Keep it PEZ for roadside action from Steve, PeloPics and more.