Race Report: The Colombians have taken over the Giro and today Julian Arredondo took the stage and sealed his KOM title. In the GC; Quintana and Uran finished safely to retain 1st and 2nd overall leaving the others to fight over the podium crumbs. Another day of top action from the Giro!

After the break of the day was allowed its lead, the gap went out to 8 minutes but everyone was wondering if it would be enough. It suited Movistar to leave the 14 out front for as long as possible but in the end the other GC riders had to start attacking and all the action was on the final climb of the day to the Refugio Panarotta. The break also splintered on the climb; first Thomas De Gendt tried, Basso was there, Pellizotti gave a dig, but in the end it was the tiny Colombian Julian Arredondo who timed his effort precisely to take his blue KOM jersey over the line first. The GC group was blown to pieces under the pressure of Pierre Rolland and Fabio Aru, but Nairo Quintara was never in trouble and had Rigoberto Uran on his wheel at the finish. Bad day for Cadel Evans, but a good one for Hesjedal and Rolland. 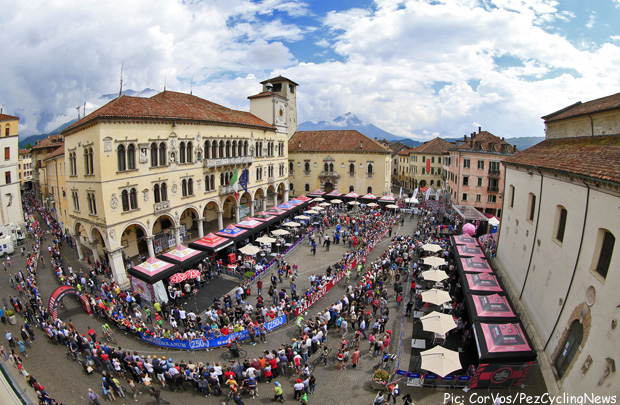 The start in Belluno

Belluno to Refugio Panarotta (Valsugana), 171 km
Another hard day in the office for the Giro riders on stage 18. From Belluno the course drops for about 6 kilometres before slowing easing its way onto the Passo San Pellegrino (Cat 1, 1918 meters), the summit comes after 54.5 kilometres. After the descent the road undulates to the special sprint in Cavalese at 88.9 kilometres. At 108 kilometres out; the race hits the first of two steep ramps of the Passo del Redbus (Cat 2, 1457), 48.2 kilometres from the finish. 12 kilometres from the bottom of the Redebus the last climb of the day starts up to the Refugio Panarotta (Cat1, 1760 metres). 16.8 kilometres long with an average slope of 7.6% with sections of 14%. 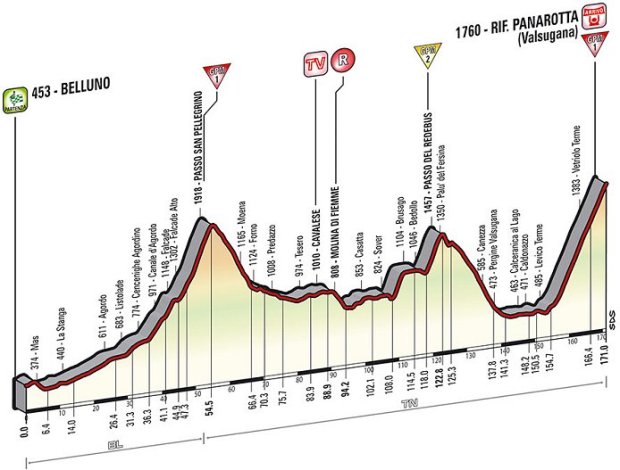 The Start
Two non-starters in Belluno: Diego Ulissi (Lampre-Merida), the double stage winner has a sore throat and a fever and the abandonment of Italian champion Ivan Santaromita brings the Orica-GreenEDGE team down to just two riders.

The start was fast and although there were some attempts at escapes no one succeeded and when the peloton hit the San Pellegrino there was more action out the back than at the front. Tim Wellens (Lotto Belisol) again wanted more mountains points and was first to attack, he was caught by five others, but they were all pulled back. King of the mountains leader Julian Arredondo (Trek) was next to try along with Dario Cataldo (Sky) and Emanuele Sella (Androni Giocattoli); they were joined by Edoardo Zardini (Bardiani-CSF) and Franco Pelizotti (Androni Giocattoli).

Passo San Pellegrino
Further up the climb and Tim Wellens crosses to the leaders with Phil Deignan (Sky), Thomas de Gendt (Omega Pharma – Quick-Step) and Ivan Rovny (Tinkoff-Saxo). The lead group was getting bigger by the minute as next to join them was Martin Keizer (Belkin) and Fabio Duarte (Colombia) and they had a lead of 1:50 with 10 kilometres to go to the summit. Alberto Losada from Katusha was also trying to get over to them which he eventually did.

Sella and Arredondo sat on the front of the group until it was time for the little Colombian to make his move a couple of K’s from the top. Philip Deignan (Sky) was the only one able to go with him. Ivan Basso (Cannondale) and Mateo Rabottini (Neri Sottoli) had meanwhile caught the group.

Arredondo took the full points ahead of Deignan as Cataldo jumped away for third ahead of Wellens a matter of 30 seconds behind the Irish/Colombian tandem. The pink jersey was 4 minutes behind as the rain started to fall.

Arredondo and Deignan were caught on the descent, so all fourteen riders were together down into the valley. The bunch had thinned out a little on the climb, but some riders were managing to regain the less than active chase group led by Movistar, the leaders now had over 6 minutes at the bottom of the San Pellegrino.

Just before the special sprint in Cavalese with 83 kilometres to go, Sella attacked and was joined by Wellens, but the big Belgian had the better sprint and was first, De Gendt took third. The lead was 7:50.

Cannondale’s Ivan Basso was the keenest rider in the group and as the best placed rider overall at 22:28 in 13th place, maybe he had eyes on the top ten?

Passo del Redebus
On the first ramp Duarte set the pace with Basso on his shoulder and Keizer close by.

The lead group stuck together onto the flat section before the second 15% ramp up to the summit. Thomas De Gendt led for most of the time with Basso helping a little. There was no speed in either of the groups and the lead was still around 7 minutes.

2 kilometres before the top and Duarte moved to the front with the blue mountains jersey of Arredondo on his wheel. Through the 50 kilometres to go and Arredondo made his move and Cataldo held onto the Colombian’s wheel. Arredondo kept the pace steady through the fir trees, Cataldo made a jump 200 metres before the line, but Arredondo had the edge and again took the full points.

After the leaders crossed the Passo; Basso, Duarte and De Gendt split off the front, but the descent is a long one at 22 kilometres, so it could be a proper move. The leaders had 6:16 on the bunch, but Movistar had lifted the pace.

Wellens and Sella thought the Basso split could be dangerous and didn’t waste any time getting over to them and by the base of the descent the leaders were all together once again. The peloton had slowed, Movistar were discussing their tactic as the whole team were at the front and the lead had gone up to 8 minutes which prodded Ag2r-La Mondiale to move forward.

25 kilometres to Go
The final climb came into view for the break and they were all working well together as they came round the Laggo to Levico Terme and on to the final climb.

Refugio Panarotta
The break hit the last climb of the day with a lead of 6:39. Thomas de Gendt attacked on the steep section at the bottom and rode off like he was going for a sprint.

Back in the pack Europcar put their men on the front of the pack for their man Pierre Rolland, Ag2r were also looking interested for Domenico Pozzovivo, this was seeing quite a few riders out the back. Movistar wanted to control things, but they were not getting through.

De Gendt powered on as Rabbotini and then Keizer tried to get with him, but Ivan Basso and Philip Deignan rode at a steady pace pulling all the attempts back.

On the wider road Movistar managed to swamp Europcar and steady the pace of the peloton, but all the GC men were moving forward.

Basso turned the screws in the break which slimmed the group down to the two Sky riders (Deignan & Cataldo), Duarte and Arredondo, once he had done that he put in a proper attack and left the others, but it must have been a bluff as it didn’t last long and he was caught and then dropped by the other three.

10 K’s Left
Thomas De Gendt had 24 second on Arredondo, Cataldo and Deignan, the bunch had closed to 4:46.

De Gendt was visibly tiring, but was still holding his own with 8 kilometres to go and 19 seconds on the three who became four with Duarte rejoining.

6.7 kilometres out and Pellizotti made it to the four chasers and Basso was working his way back up as De Gendt was within sight. Arredondo jumped past De Gendt to be joined by Duarte and then Deignan coming into the final 6ks.

De Gendt dragged Pellizotti up to the others, attacks again and then is attacked by Pellizotti.

In the bunch Rolland attacked after his team mate Sicard had softened the opposition. Quintana was on him in a flash.

Cadel Evans was then in trouble in the GC group as Rolland made a second attack; again Quintana was on him with Hesjedal and Uran on his wheel.

Up front everything was changing, Arredondo made an attack with 4 kilometres to go, Deignan was still looking good behind him, but Pellizotti was now in difficulty. Duarte came past them and headed up and off after Arredondo.

3 K’s and Deignan was 20 seconds behind Arredondo, in the bunch Rolland was the strong man and he attacked putting his name on the podium third place. Tinkoff-Saxo were worried about Rolland and put Rovny on the front to chase as was Uran who had Wout Poels to help him.

Aru, Quitana, Pozzovivo held on the OPQS train dragging them back to Rolland as the other top men were dropped. Aru thought he had the edge and attacked the chase group.

At the finish Julian Arredondo zigzagged his way to the line 17 seconds ahead of Duarte and 37 on Deignan. 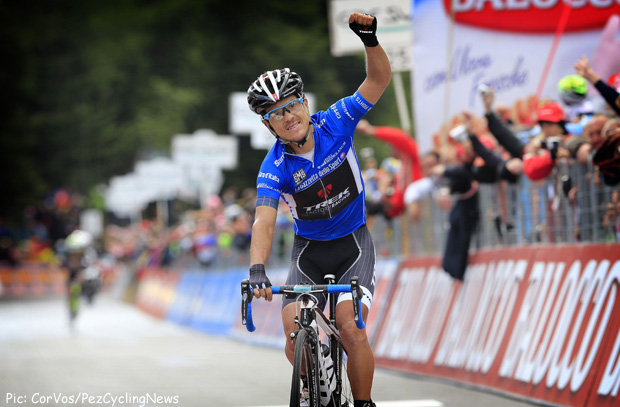 Aru was caught, waited and attacked again, this time successfully. Pozzovivo didn’t want to lose a second to his countryman and worked hard to limit any loss, which worked well for Quintana who jumped him for the line with Uran on his wheel. 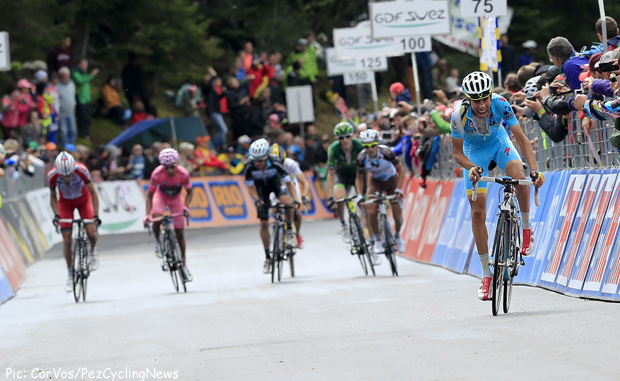 Hesjedal and Kiserlovski lost time, but the big loser of the day was Cadel Evans who struggled in with a small group 4:22 down on Arredondo.

Yet another day of excitement, but tomorrow’s mountain time trial is going to be decisive, although the Zoncolan on Saturday won’t be a club run either. Keep it PEZ for all the Giro action to Trieste on Sunday.

Yuraytis gold in the time trial