By Richard Pestes On May 6, 2014
Share
Like PEZ? Why not subscribe to our weekly newsletter to receive updates and reminders on what's cool in road cycling?

I’ve been lucky to see nine Giros in the last decade, and even luckier to have photographed some of the most beautiful women in the world to share with PEZ-fans, all in the name of our own brand of cycling journalism. Here’s 10 of my favorite Giro d’Italia Daily Distractions…

I’ve reached a certain stage of life where it’s just easier to admit that I enjoy looking at beautiful women – not as a perv (well, not usually), but the power of looking at a beautiful woman can not be underestimated. Let’s see a show of hands on this one: have you ever been in a really bad mood, crap day, nothing’s going your way, and then bam – you see a woman who catches your eye – and for a split second something ticks over in your brain that makes you forget all the junk – and life is good. You remember what it feels like to be a man. And the effects are lasting too – women make incredibly strong impressions on our brains – just think of all the hotties you have stored away between your ears.

As a self-proclaimed lover of Italian women – (indeed, I married one) – there’s no denying that the Giro is my favorite three weeks of the year – not just because the bike racing is great, the scenery fantastic, the physical journey of circumnavigating the Italian boot stupefying, the negronis & food delicious – but there’s three whole weeks of looking at Italian hotties – the most gorgeous creatures on the planet. And no one celebrates this like the Italians.

But we can try.

So in the spirit of self-awaerness, and some good old fashioned ogling – may I present a collection of the hottest, prettiest, best looking women we’ve enjoyed presenting since 2005, and my own first credentialed foray to the Giro d’Italia. Judging here is highly biased, and consisted on a select panel of one… me. This is in no way a definitive list – but should be considered as the basis for an ongoing discussion amongst PEZ-Fans, and indeed men (or women) everywhere who appreciate looking at beautiful Italian women. 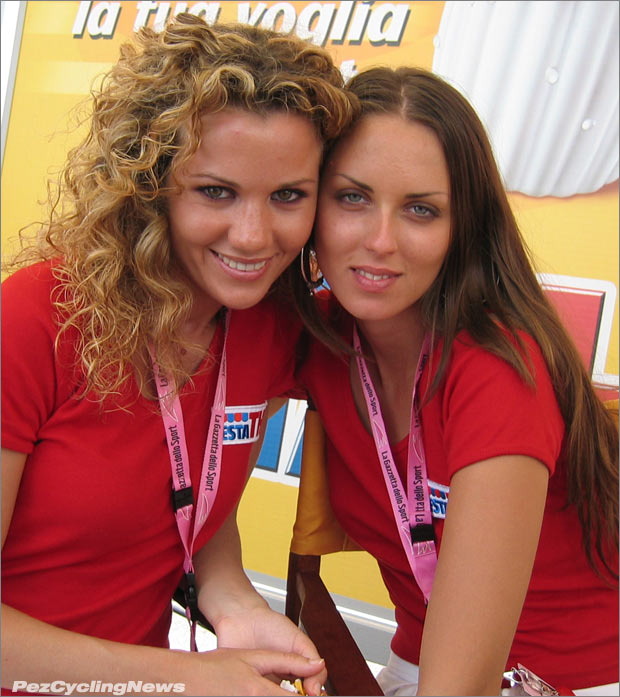 1. Giro 2005: Michela & Manuela
This was my first Giro as press, and as you can imagine, I was like a kid in a candy store… but taking pics of the hostesses and podium girls was more daunting than I’d expected. These women are tall, gorgeous, speak a different language, gorgeous… you get the idea. Michela (l) and Manuela were in charge of the pink jersey presentation, and rightly assumed the top of the podium girl hierarchy. In spite of the lofty pretense, both were gracious and easy to talk to – these ladies who were about half my age made me feel like a schoolboy all over again. At subsequent Giri, I’d run into Manuela, who’d matured beautifully past her podium duties, became a mother and moved to Roma, but always remembered our meeting and my first podium girl interview. Read my interview here. 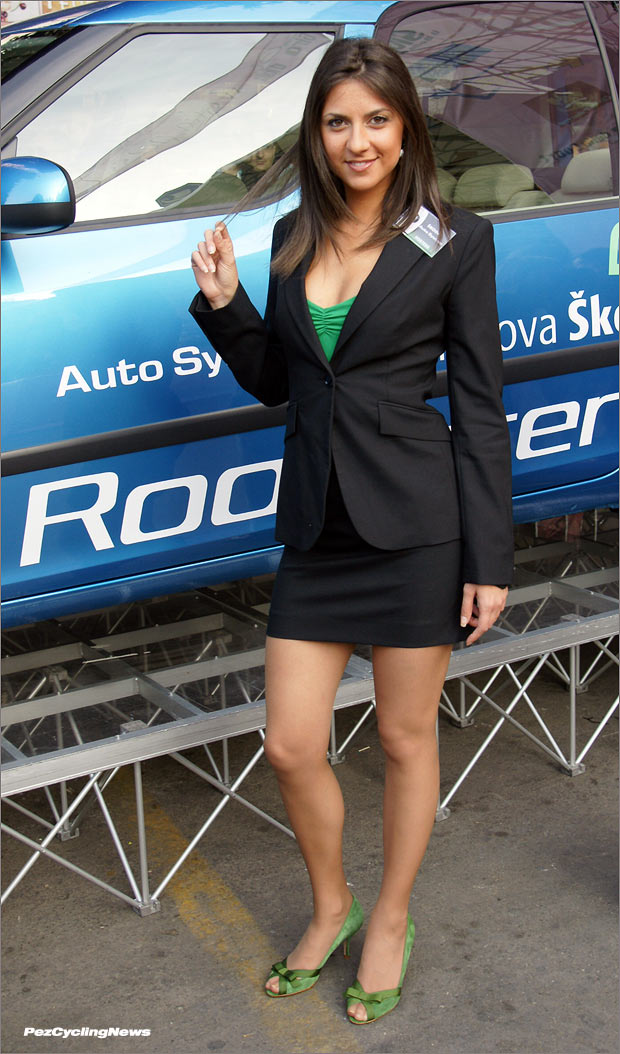 2. Giro 2008: Start in Palermo
What is it about a girl playing with her hair? Gets me every time. This girl struck me as a quintessential Sicilian – a young Sofia Loren – when I saw her at the Giro teams presentation in Palermo. There were about four of these olive-skinned beauties showing off some brand of car, and although we didn’t say more than a few words (my bumbled request for a photo), she made me feel like Richie Cunningham in that Happy Days episode when he pretended to be a fashion photog so he could shoot some pics of this girl he liked in Arnold’s Drive-in. (“well, that’s enough pictures with the lens cap on for now…”) 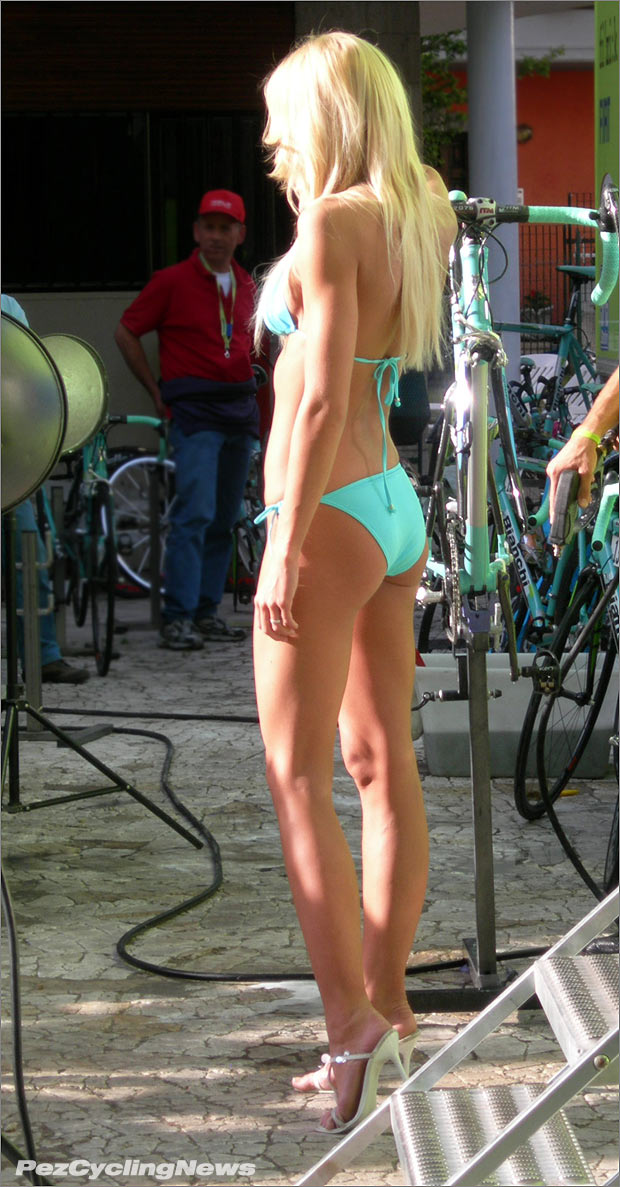 3. Giro 2006: Aprica Stage Finish
Success finding candidates for the Daily Distractions page runs the full gamut from ‘planned like clockwork’ to ‘did not see that coming’. The penultimate stage in 2006 was a killer – 7-ish hours over the Tonalo, Passo Gavia, and Mortirolo, to the finish in Aprica. I’d ridden the final 120km (in about 7 hours) myself earlier that day, and then changed into my ‘reporter’s kit’ to capture the stage finish. Some 45 minutes after the winners arrived, and groups of riders were still straggling in, I headed to the Team Liquigas hotel in hopes of finding Dario Cioni, who was riding in service of a certain Danilo Diluca that day. To my complete surprise I stumbled upon a calendar photo shoot, featuring this 6ft+ Amazonian goddess, clad in the tiniest of bikinis, posing for the photog. The looks on the riders’ faces were priceless. 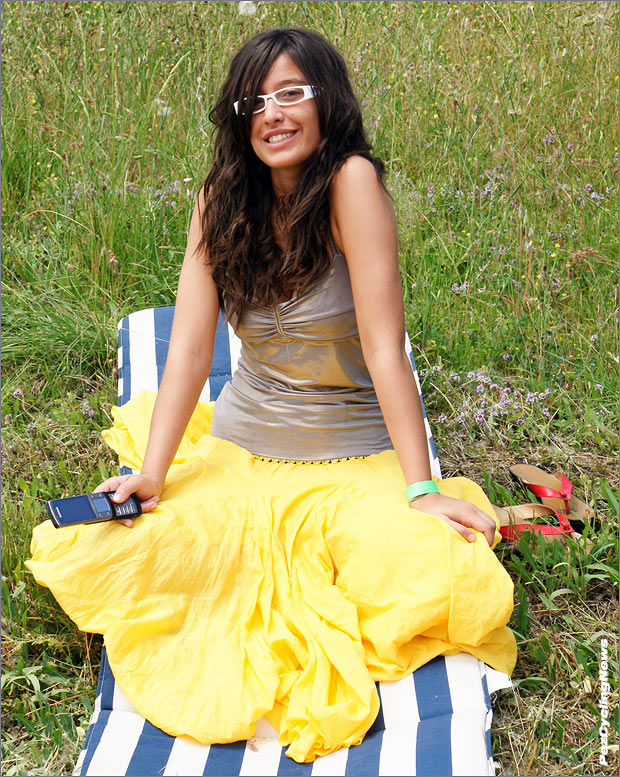 4. 2009: Roadside to Bologna
Another completely random photo-op was on the road from Firenze to Bologna on a screaming hot day, the year Lance came out of retirement and was reportedly picking up a huge paycheck to ride the Giro. The corsa was up and down all day through the mountains and hills that separate these two great cities. My trusty driver was my old chum Mino, who was happy to screech to a halt upon any sighting of a woman who might be DD-worthy. Cresting a hill, we spied Luanna sitting by herself in the green grass – her flowing yellow skirt & striped cushions stood out against the green grass, but it was her funky glasses, flowing hair, and easy agreement to be photographed that sealed her fame for Pez-Fans. 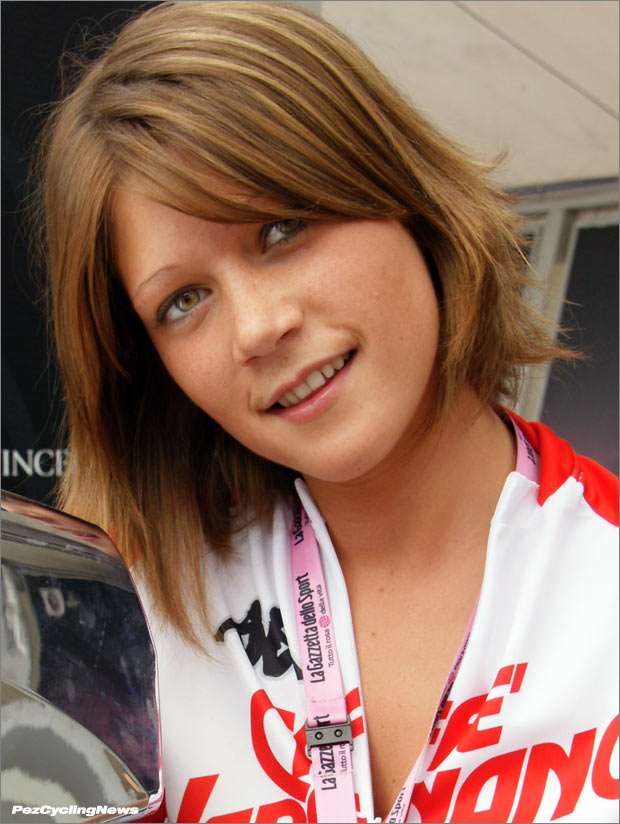 5. Giro 2009 – Beer Girl
The girls working the booths in the village are pros – the kind you find at any trade show or corporate event – it’s their job to smile and make us feel … you know… special. While I find most of them happy to pose for photos, a lot of them are really good at putting on the game face for the camera. But once in a while I get through the pro-job, and a girl offers up a smile that’s genuine, sincere. She gets the joke and is happy to play along. My original pic of this lady had her pulling a coffee from an espresso machine, and it was only when I looked closer did I discover her amazing smile – not trying too hard and showing off her ‘keep it real appeal’. Either that or she’s just really good at smiling. 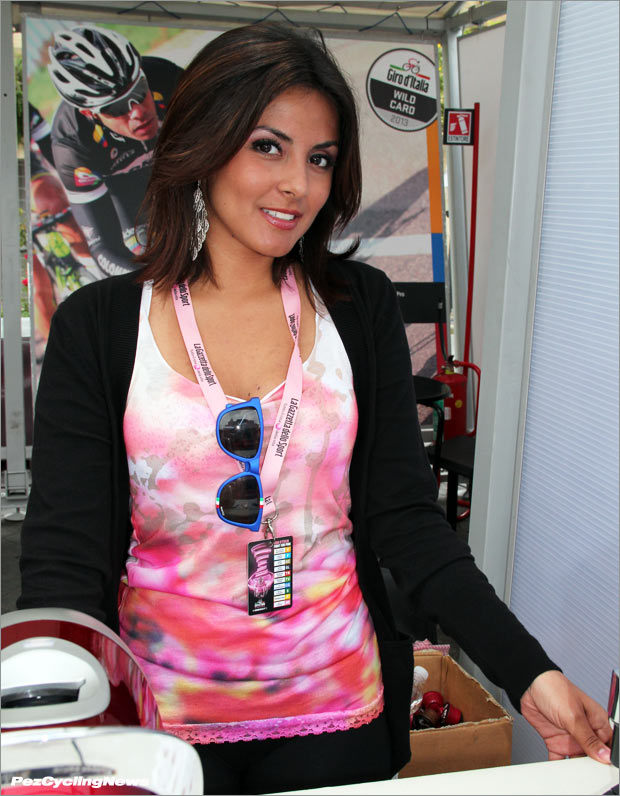 6. Giro13: Cafe Columbia Girl
In a land that perfected small shots of strong coffee, it’s no wonder the espresso girls are the most popular in the village. Last year’s Cafe Colombia booth was constantly a-swarm, possibly because of the coffee, but more likely because of this year’s winner in the ‘young Sofia Loren Look-alike Contest’. 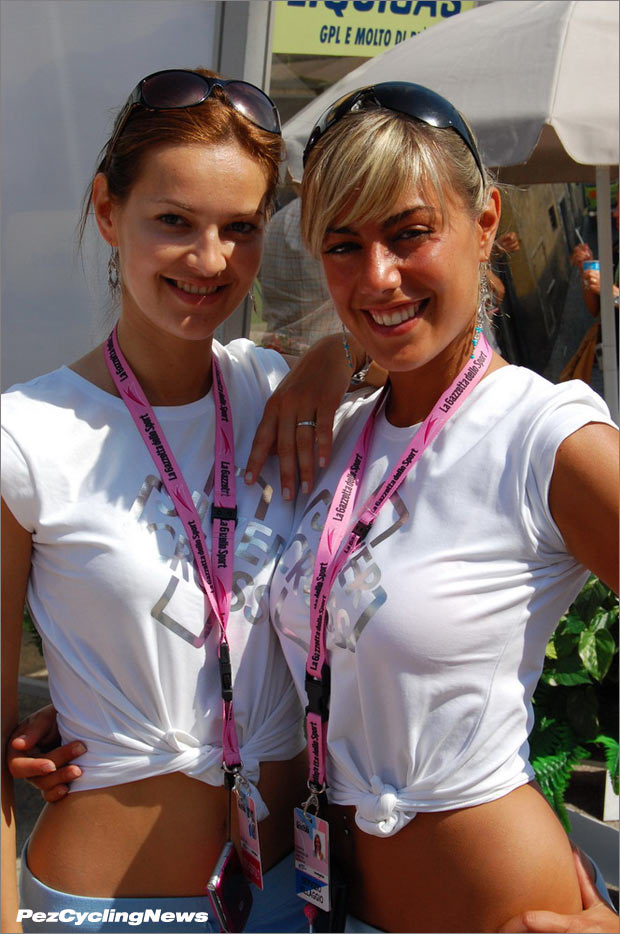 7. Giro07: Cuties
There’s something timelessly appealing about this shot from 2007 – the tanned skin, those tied-up t-shirts, and once again smiles that mean business, but hint at ‘good times ahead’. 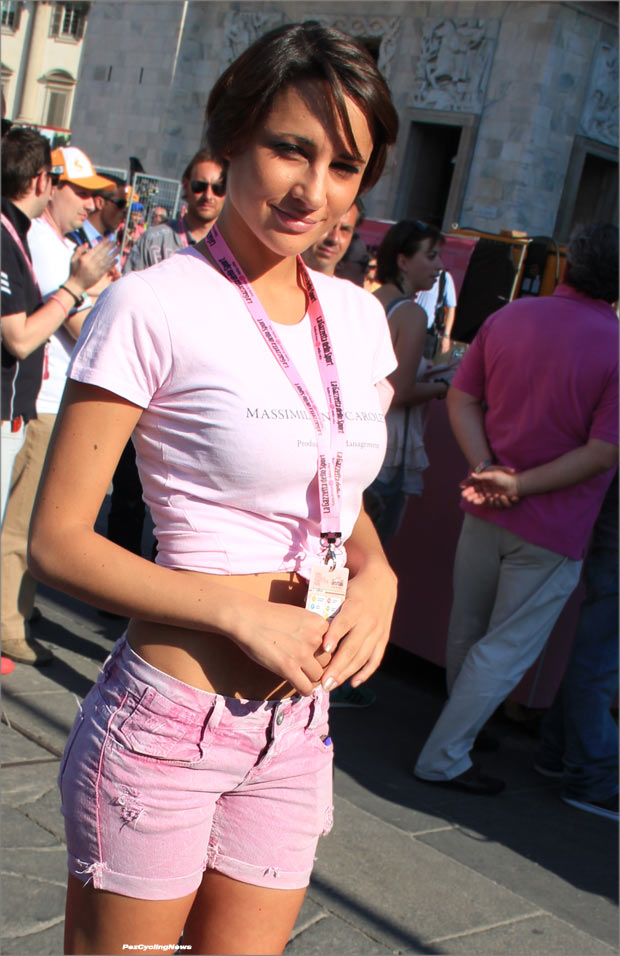 8. Giro11: Final Stage Finish In Milano
In a country full of head-turners, each Giro features one woman who turns more heads than the others. Some in a “you don’t know you’re beautiful”* sort of way and others who know how to work a crowd. This lady at the 2011 Giro finish in Milan was parting the throngs in a sexy and she knows it sorta way. And I (quite happily) got washed aside like the rest of the flotsam & jetsam in her tiny pink tee, short shorts, and stilettos-clad wake. It’s a wonder I could collect my wits long enough to snap this pic. 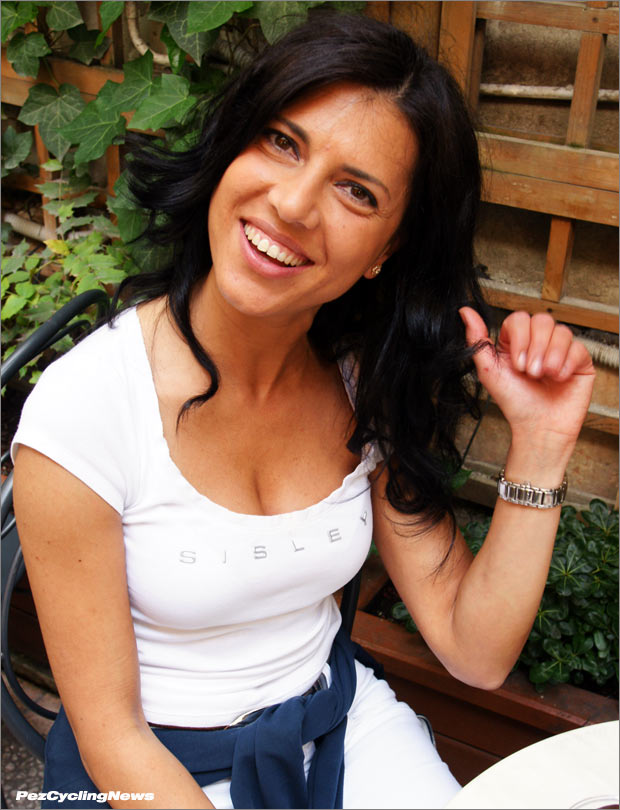 9. Giro10: Final Stage Finish in Verona
Vivacious, engaging, enchanting – who doesn’t want a woman who meets these simple requirements? When you meet her – marry her – that’s what I did. And that’s what the owner of the Italian cycling site Ciclonews.it did when he met Vania here. I spent just enough time with her at the Giro finale in Verona to know that she’s: 1. the real deal, and 2. her husband is a lucky man. 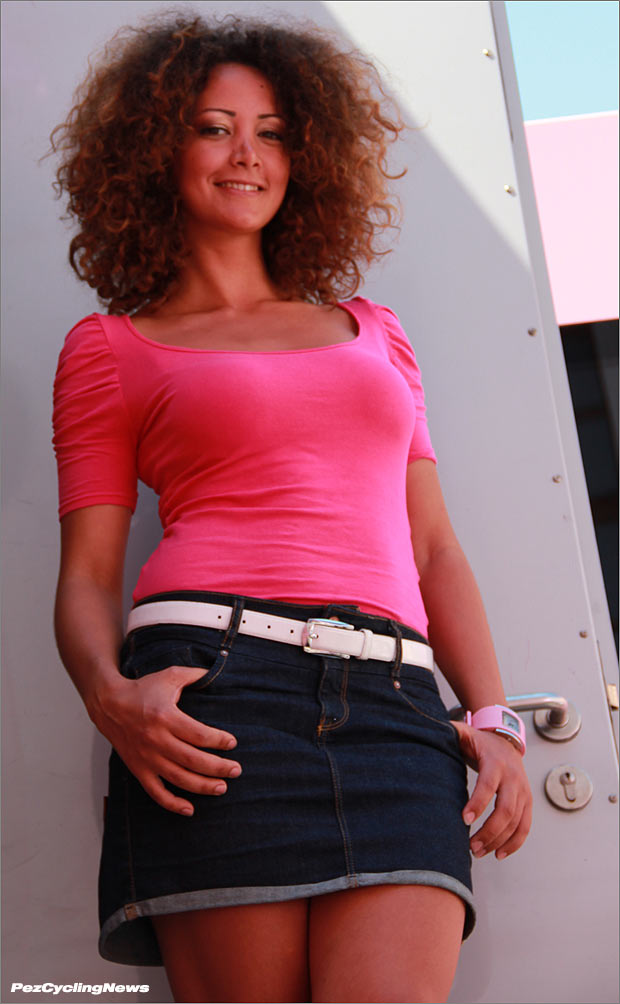 10. Giro11
And sometimes explanations just aren’t required, words would fail to do their job… Sometimes it’s better to just look. And enjoy.

——–
Let us know what you think – and keep it dialed for PEZ as our Giro Preview week continues!