ROADSIDE ST. 9: As a follower of pro races for some 20 years now, our Italian reporter Alessandro Federico has seen a lot of racing all over the world. Nothing quite feels the same though as when his favorite GrandTour of the year comes right through his home region! It’s time for a special backyard edition of Alessandro’s Giro di Pez.

After the dinner with the Pez and the Italian crew yesterday the night was too short to get the needed rest but today it’s the big day of the ITT in my backyard. The plan is simple, try to have a bit of everything. It’s Angelo Giangregorio the Milan based photographer and new Pez-man on the block who is my mate today and tomorrow. 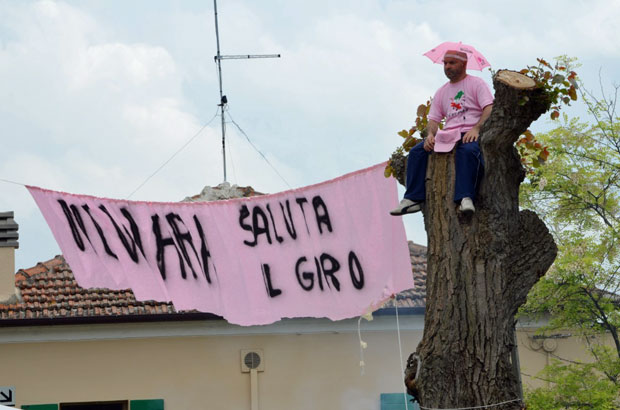 Our latest PEZ man Angelo? No, just a local with an interesting viewpoint on the race.

We have the hard duty to takeover from the Pez himself and we are well motivated. So, it’s early when I phone to Angelo; let’s have a look at the route by car. The idea is to get to the stage headquarters, grab the credentials and fly to the start in Gabicce to watch the first riders rolling out for the longest time trial the Giro has seen since some years. 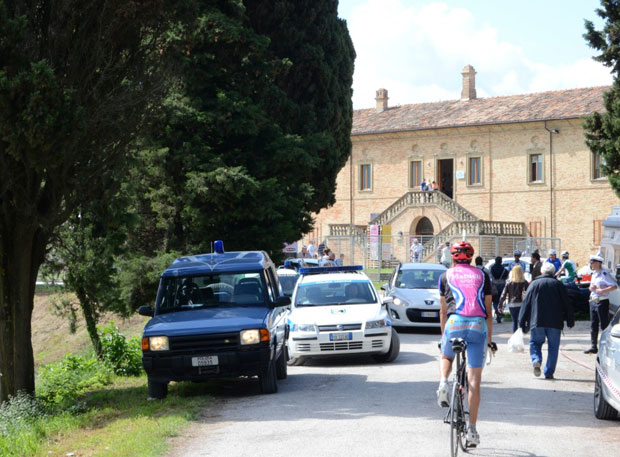 When we come to Saltara it’s 10 am but the headquarters are already crowded and out of the villa guesting the officials a chief cook is already preparing the brodetto, a local fish soup in a gigantic fire. 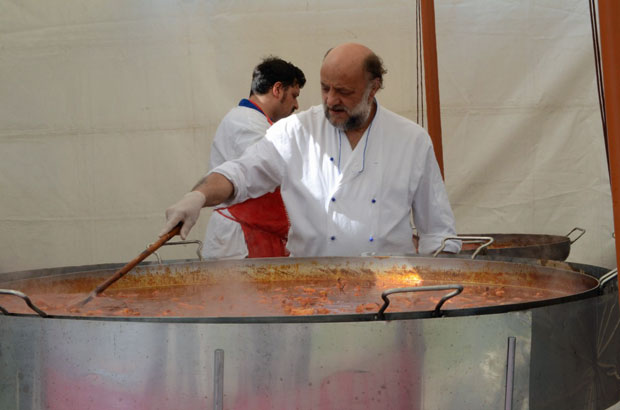 Too early to eat fish for me and Angelo as we are concentrated on the credentials, which is never an easy job, even after many Giros. You may lose a lot of precious time there but at the end we came out with everything in hand and this is already a good start.

Pez calls us from the departure village while we are already on the way. The sky is not fully clear, there are some clouds over there but seems the weather could hold; hope it won’t develop as yesterday with a final storm. Gabicce is a small town on the Adriatic coast, seems quiet even today and it’s nice to get in the Giro feeling while you walk the way to the starting line; in front of us the big boss Michele Acquarone talks on the phone and goes on his way like anybody else. 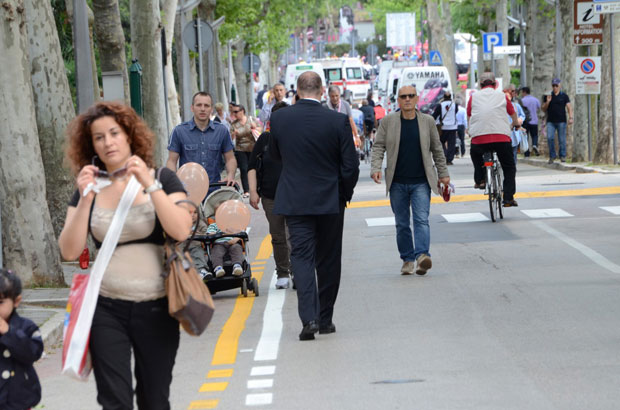 The man in black, Michele Acquarone

We make a tour of the team buses passing near to each team stands while the riders are preparing for the start. I realize that today the national champions are just different from any other stages, in the Movistar team area the British champion is rolling and warming for his time trial; Alex Dowsett is the name, just don’t know him, but get a picture of his preparation. 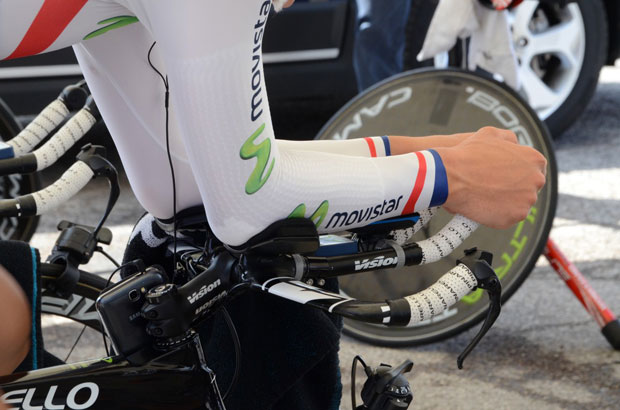 It’s time to move on the route and I suggest to Angelo to walk the climb at half part of the race. In the last part is very steep and it will be a nice point to shoot. It’s warm and there a load of people on the road enjoying the good weather, the calm of the country or simply a day out of routine as me and Angelo are also doing. On the top of the climb we find a salsicce point and we agree to have a panini with them inside. 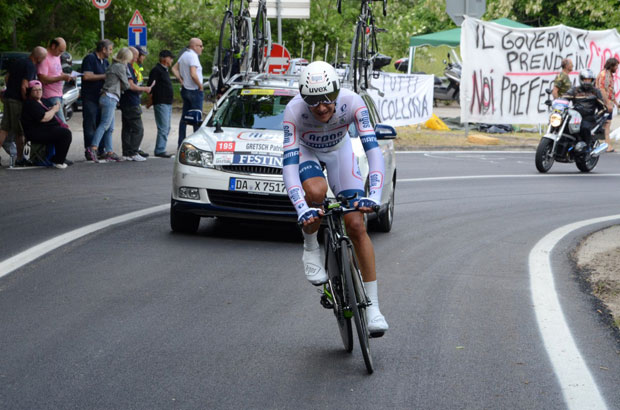 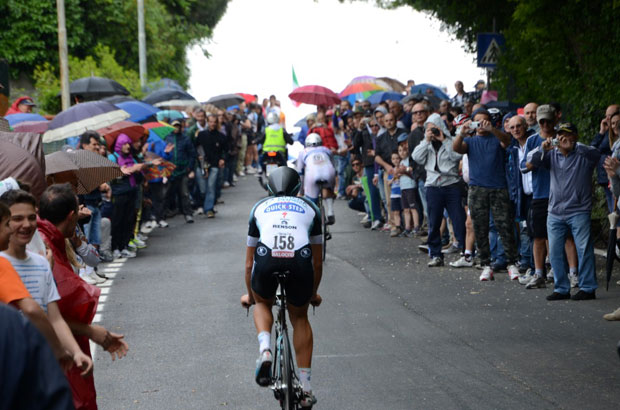 I propose then to Angelo to move forward and get the final riders, the best in GC, at the end of the descent. We move there and I get the opportunity to pass from home and to take with me my wife Natalia and the youngest of mine, Mario, just nineteen months. 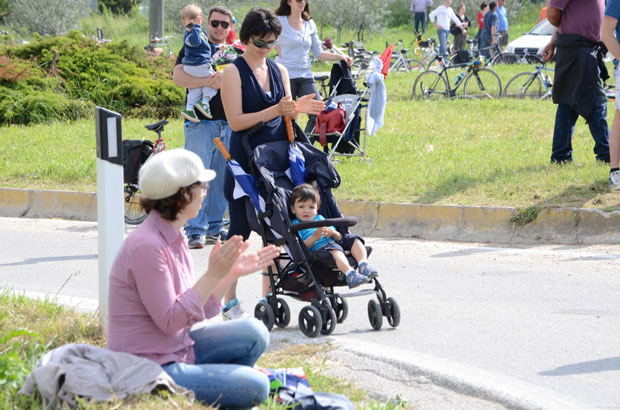 Mario is not yet a cycling fan but he seem very interested to the Giro, not to riders but especially to helicopters covering the stage for TV. The best are now passing and a shining sun resists against some bad clouds on the sea. 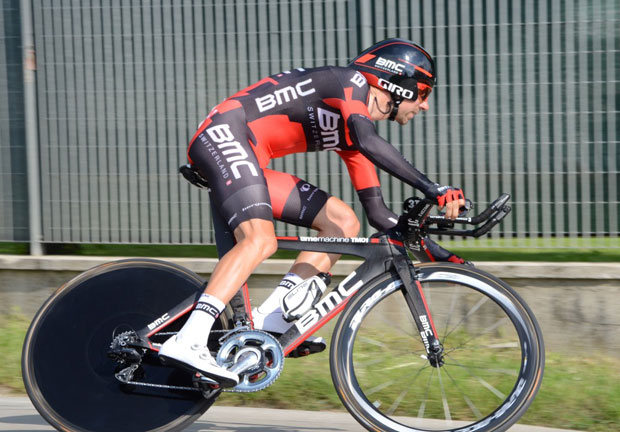 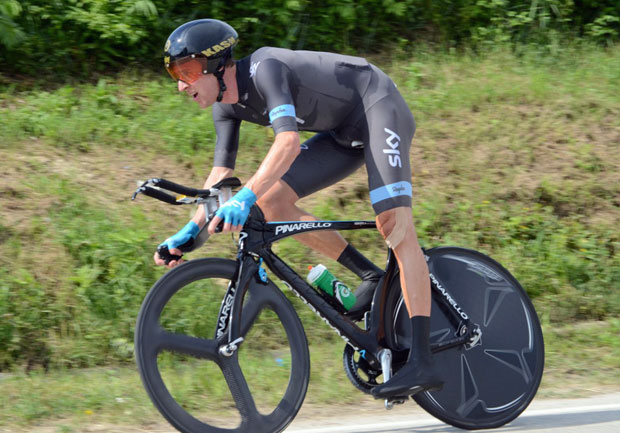 Also this stage is now over and we have a long night in front of us before tomorrow stage from San Sepolcro to Firenze; we will be once again on the road, following our instinct and our desire of cycling.