ROADSIDE St.2: How fast fortunes change when chasing a Grand Tour: one minute you’ve missed the boat to the TTT start, and the next minute you’re in the cockpit of the high speed ferry with il Capitano’s blessing. It’s day 2 and we’re just getting started.

It’s 7:10 PM local time and we’ve just boarded the ferry for the 45min return to Napoli. What’s left of the Giro entourage filled the last boat a few minutes ago. So myself and about 100 others are trying to guess which dock the next ferry will pull into. It’s a tricky call, since the guy at the ticket booth told us that dock over there, but it looks like the captain has other ideas as he throttles up the reverse thrusters and aims the back end of his barca for this dock over here. It’s playing out like a 1960’s Italian tv sketch – 100 passengers shuffling enmass from one dock to the next, then back to another to as we try to guess where the spinning ferry will stop next.

We’re just glad to be heading back. But how we got to his point of the day is what this report is about. 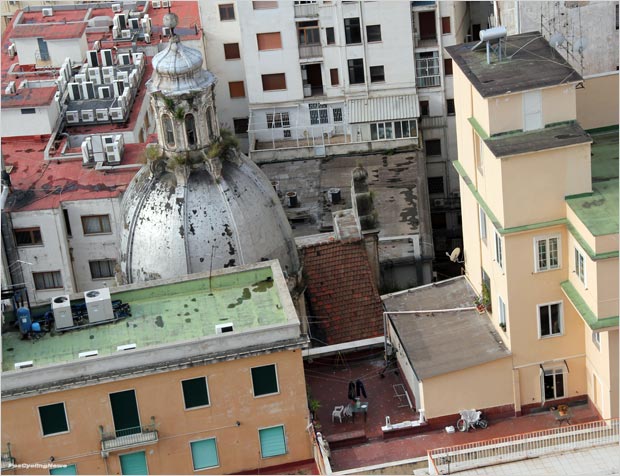 To Set The Stage
Last night’s thunder showers gave Napoli a much needed wash, and today dawned bright and sunny for the stage 2 Team Time Trial on the nearby island of Ischia. Moving a race the size of the Giro is a logistical nightmare, but the organizers dug in with a creative day running the 17.4m TTT on the small hunk of rock first settled by the Greeks some 2800 years ago. As part of the press, passage on one of the many high speed ferries had been booked for us – too bad we missed the email with the time of that particular boat. No real worries though as the next one leaves in an hour, which seemed to be worse than opening our wallets for the extra euros. 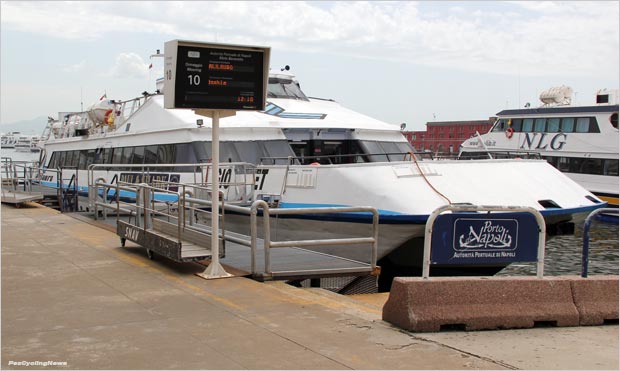 But the beauty of Italy really shines when you’re forced to dial it back a notch, and letting life actually happen to you can present a vast array of entertainment possibilities.

For example – while waiting for the next boat, the lovely Madrina del Giro – Alessia Ventura showed up dockside in a flowing fuscia skirt – complete with entourage. Seizing the moment – more fotos were snapped, including one with my autista Mino’s ‘collezione personale’.
See today’s Daily Distractions for the proof on this one. 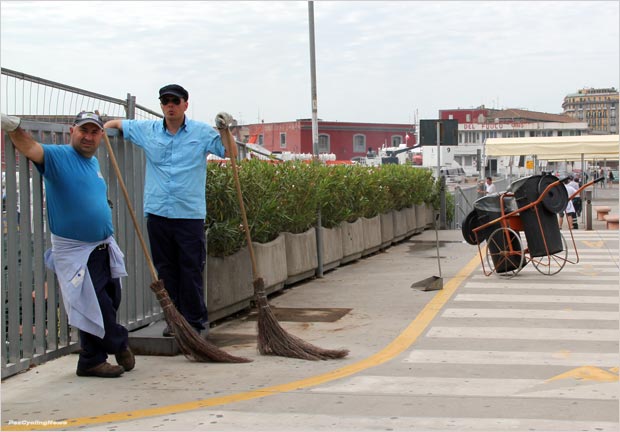 Then in what played out as ‘entertainment in the smallest doses’, I was amused by three street cleaners who stood around doing virtually nothing for a full half hour. Two had brooms, one had a dust pan, and the third spent a lot of time on his phone. Maybe because it’s Sunday, maybe it’s a union rule, maybe austerity… but I saw no signs that any form of work would take place any time soon. And check out the wheels on that cart – ! (Trust me – I’ll tie this together for you later in the story…) 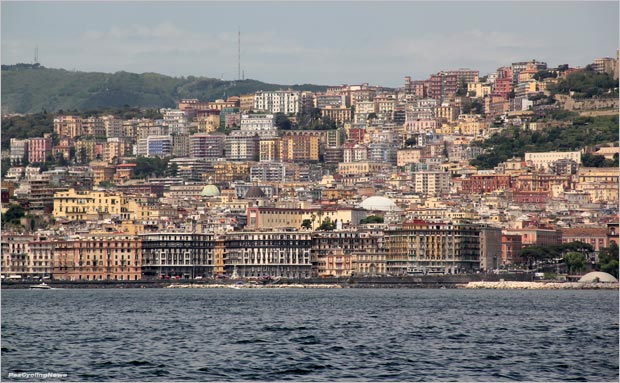 We pulled out of port on time, and in a few minutes the capitano gave ‘er some stick and this high speed ferry became just that – shooting a hydroplane-worthy rooster tail out the back as we left Napoli in our diesel-fumed dust. 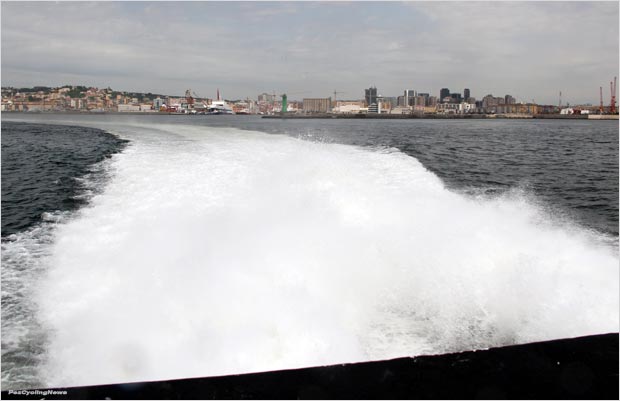 Little Known Fact About My Driver #472
I’ve known my driver Mino for about 8 years now, and while we’ve seen each other less than once per year since then, we’re at least on good enough terms to share a room during this race for a week. Still, the guy surprises me every day. Get this…

Last night he tells me he’s a licensed sea going vessel operator – not the kind of weekend boating a lot of guys splash into on weekends – we’re talking commercial grade, up to 24 meters (that’s 75 feet, fellas) powered vessels. And that makes him qualified to drive our high speed ferry. Who’d a thunk it?

With this new found tidbit of info in hand, I suggested we request access to the cockpit of our ferry, in hopes that Pez-worthy hijinks would ensue. 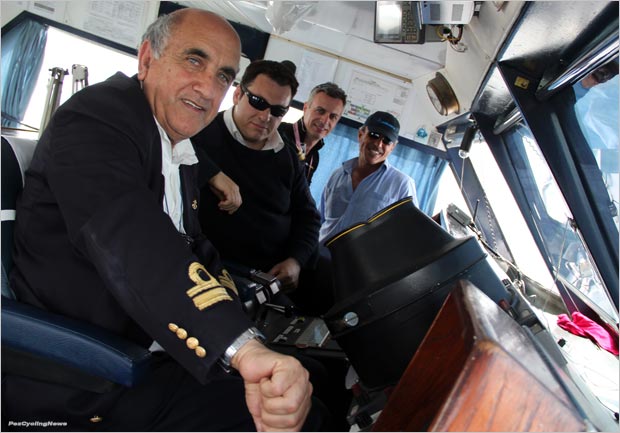 Never one to take my suggestions lightly (another sign of an indispensible wing man) Mino was off like a shot to chase down this lead, and before you know it we’re climbing the ladder-steep stairs to the top floor of the ship. Bingo – we’re now the guests of Capitano Antonio Buono and his crew. Seeing as Italian ship-piloting is under rather tight scrutiny since the Concordia disaster (as it should be), a photo of Mino in the driver’s seat was out of the question. However – we were granted access to the exclusive upper deck of the vessel – where I spent the next 40 minutes snapping photos, soaking in the sun and hoping my wig wouldn’t blow off in the 70kph winds. 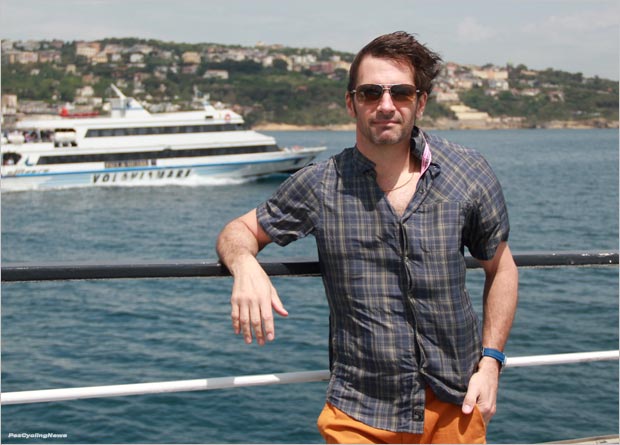 Needless to say, the rest of my day would be gravy. 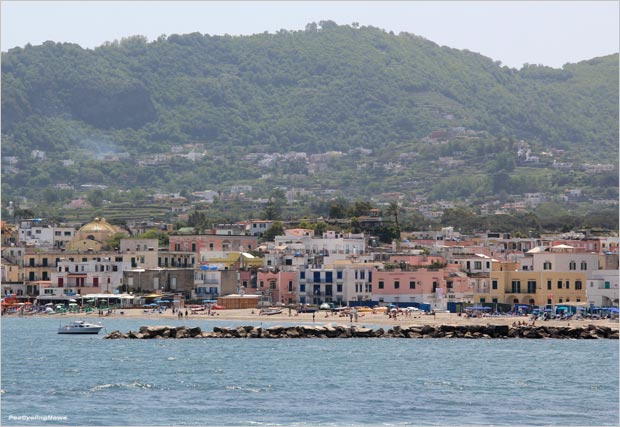 Onto Ischia!
This really is a beautiful part of Italy – and I’ve seen a lot of it – but this is my first time in the Napolitano region. It’s easy to see why ancient Greeks came up here, and why living in the shadow of the once active Mt. Vesuvius probably didn’t seem like a bad idea at the time. The coast off Napoli is home to the more famous island of Capri, but the smaller chunks of terra firma like Ischia are a welcomed dose of tranquility after a few days of the Napolitano ‘jungle’. The island is home to about 60,000 inhabitants, and it seems almost as many “wellness spas” and resorts. Still – it’s quiet – even on this day the Giro invades. 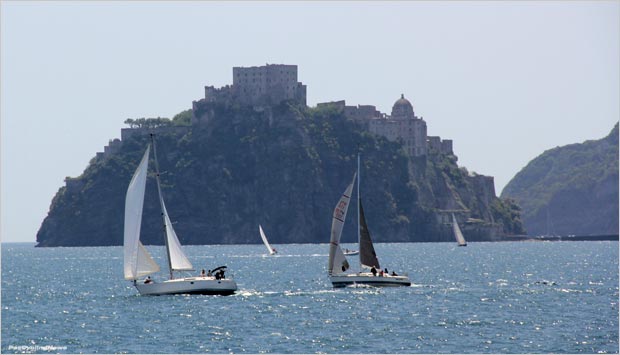 A couple hours ahead of race start gives us plenty to time for a stroll on the nearby kms of the corsa, but unsurprisingly a wrong turn leads us along empty streets and wastes time in the hot mid day sun. Eventually we find the route – but it’s even quieter up here. 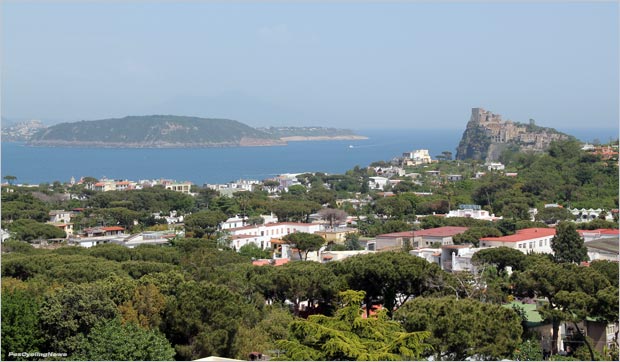 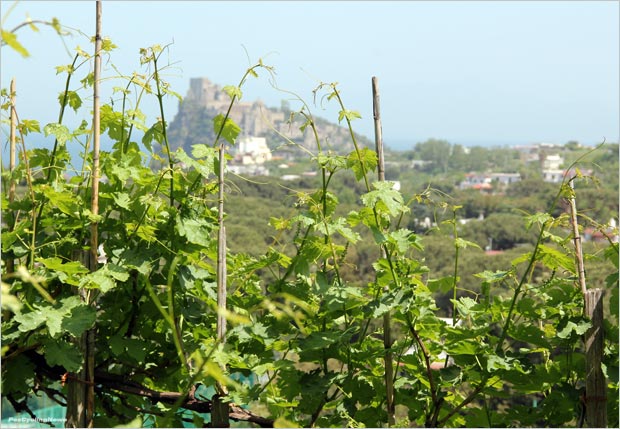 We’ve emerged at the top of the day’s first climb, shortly before the teams start rolling by after their pre-race recons. First come the Team Blanco guys, then a few Ag2r’s. 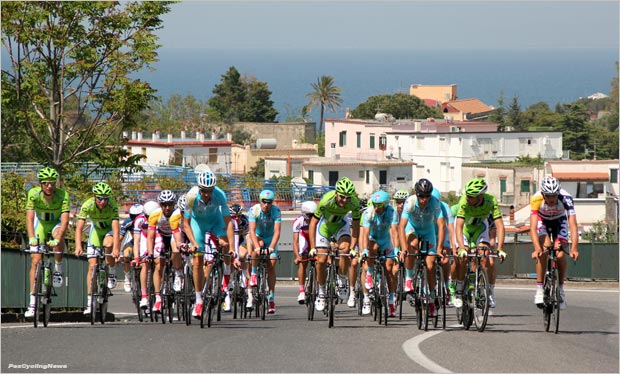 Then bam – something I’ve never seen before: an entire peloton of teams – all on their TT bikes. Musta been 40 riders in this group. And you know that sound a full carbon disc wheel makes – ? Imagine that times 40. Yeah. 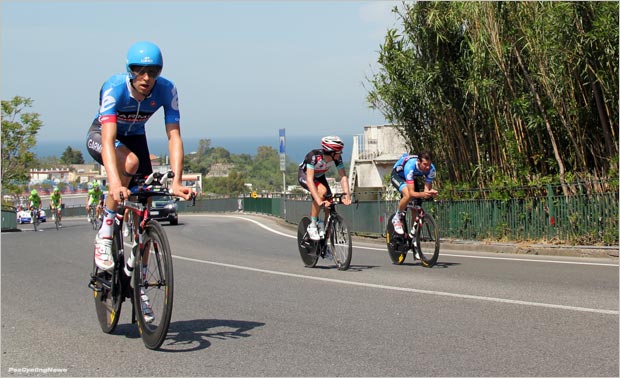 Next came what I’m now dubbing my ‘Daily Meeting With Ryder’. Here he comes along the road and it’s empty but for me & Mino – I snap some shots and toss out my now standard call of “Go Canada! Yeah Ryder!” Maybe he recognizes my voice – or maybe he’s just being Canadian (ie: over polite) but once again I get the nod. (No words of response yet –but I’ll give him a few more days to warm up to me.)

If you’d guessed I was as giddy as a pre-teen girl at a Justin Beiber concert, you’ve guessed correctly (- can you put gravy onto gravy?)

We’re almost into port now – so I’ll sign off with the reason some of you might have read this far – another foto of a street sweeper – yet in complete contrast to those guys up top. This guy was cleaning small pebbles of debris from the TTT corsa – well done. 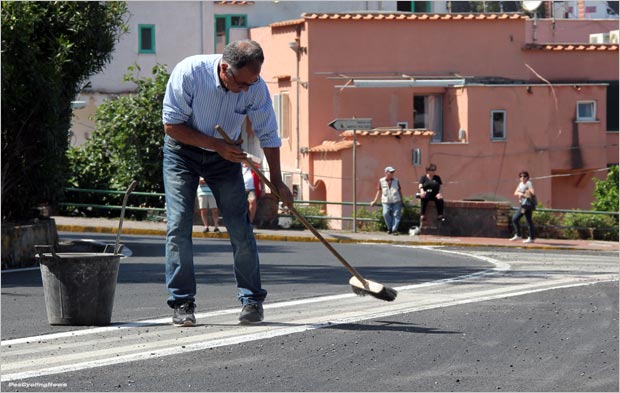 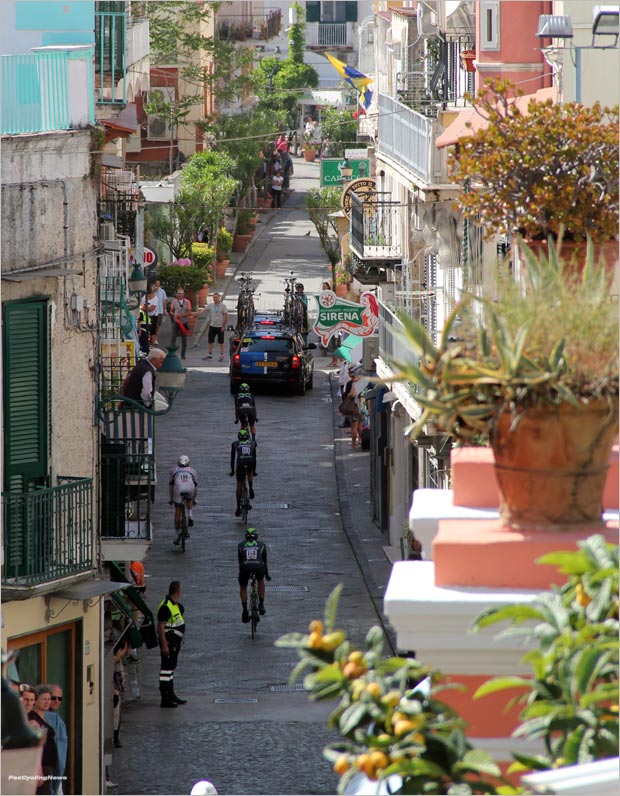 Teams make their way to the TTT start.

Tomorrow we leave Naples for Sorrento, the Amalfi Coast, and a few days in the wide open south of the boot.

Thanks for reading and keep it dialed to PEZ!