Roadside St. 21: The final day had arrived, the 2014 edition of the Giro was coming to an end. Although we only covered the last six 6 days, we have come away as complete fans. It is such a different event to either the Tour de France or the Tour Down Under. It’s Italian-ness is what sets it apart as unique.

It’s a slick operation and extremely well run, like any modern event has to be, and the Italian public are genuinely enthusiastic about the Giro. They are crazy for it. The cycling politics that bog everyone else down, just don’t seem to impact the Italians’ enjoyment and enthusiasm for their Grand Tour event. This is a great thing. 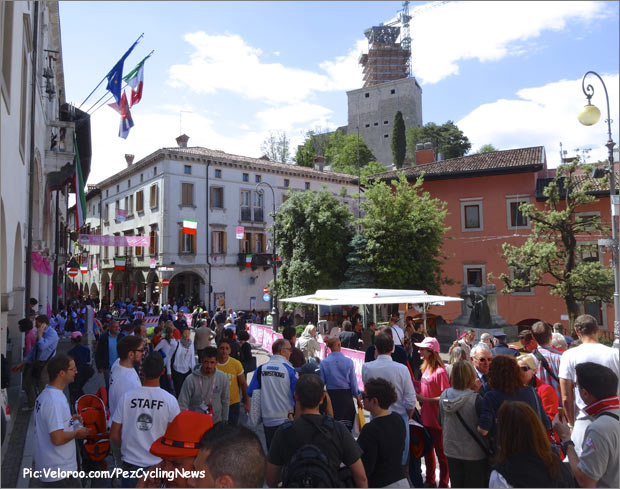 An hour before the depart it was very much standing room only along the route.

So to our last stage. The only similarity to the Tour de France – apart from the obvious 3 week duration, is the last stage is really a celebration of what has been a grueling event, for the Riders, Teams and Organizers. Even the media and their publics’ appetite for any information takes its toll after 3 weeks. Now we all have 4 weeks to recuperate before Le Tour!

Off to Gemona del Friuli for the Grand Depart to see what this old Roman village nestled into the hillside would do for their moment of Giro glory. The rider sign on was in an open stage looking out over the surrounding countryside. The organisers planned a snaking route around Gemona del Friuli’s narrow winding cobbled streets. Under a bright sun the setting was the perfect depart and allowed the citizens to enjoy a morning of cycling entertainment. 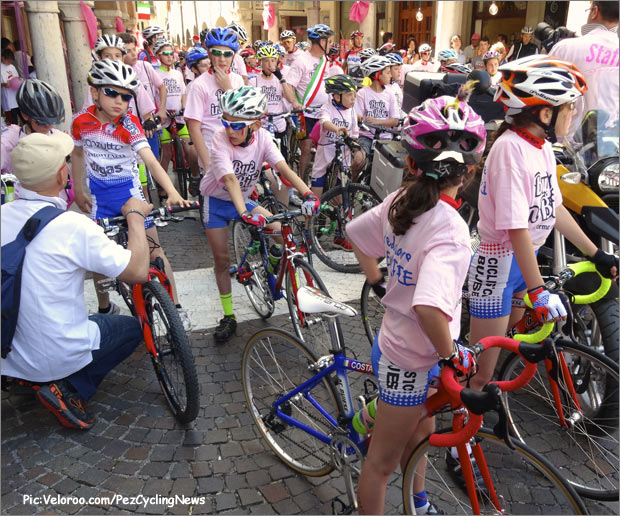 Before the pros came through, the school children of Gemona del Friuli got to do a special parade lap. I wonder what sort of an impact this opportunity had on these kids? Some were looking pretty serious. 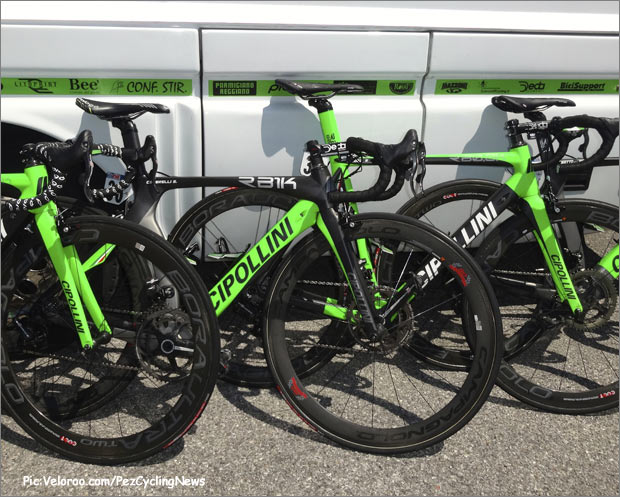 Back to the team area and all the teams were getting ready for the final fling. Team Bardiani’s Cipollini RB1000’s were neatly presented outside the team bus (Read the Pez review here). 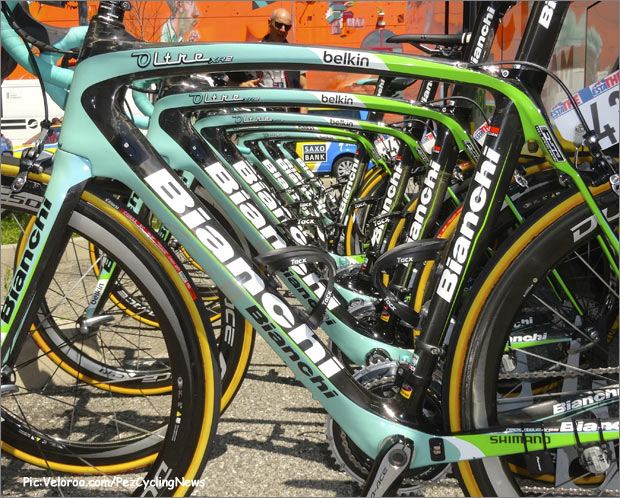 Love it or hate it but Bianchi’s Celiste Blue should always be present at Giro. 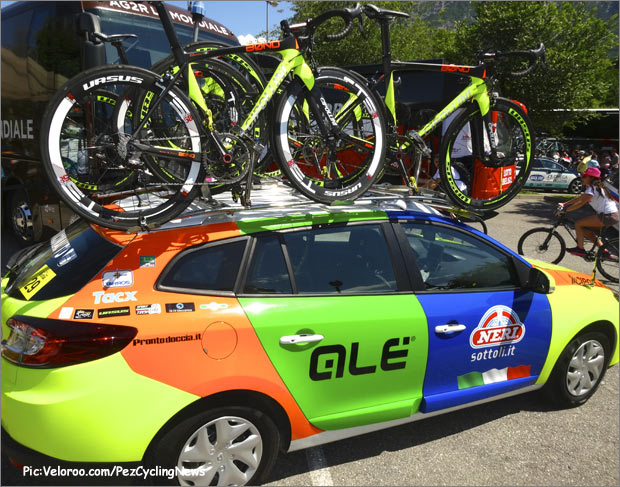 But the Italians do love their color schemes – tasteful or not. 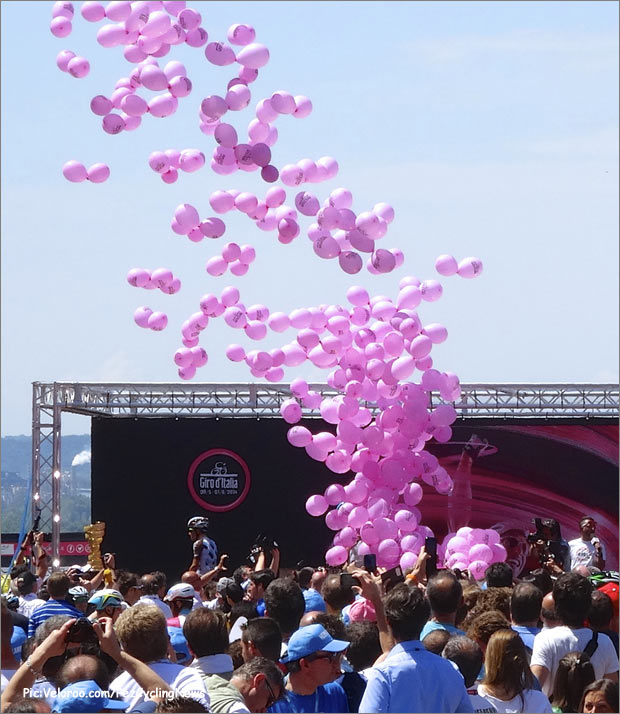 Back into the village for rider sign on, a special effort was made for the Giro Champion, Nairo Quintana. What a difference from Tuesday when he felt he could not go on after freezing in the snow at the top of the Stelvio Pass. 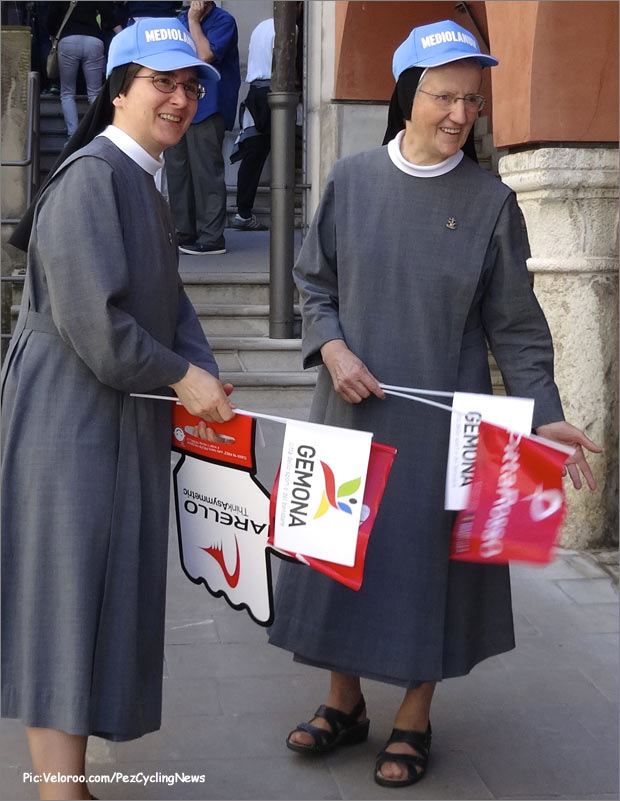 There will be “Nun” of this not having fun when the Giro is in town. But be careful of over commercialism, it can be a nasty habit. 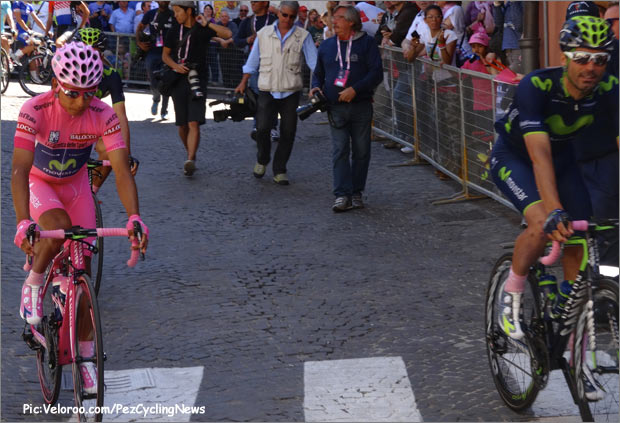 The riders were released from the sign on area to do their tour of the streets to the start point. From our vantage point we heard the crowd go wild long before we saw Quintana. His team mates had pink bar tape and socks to celebrate their Giro efforts. 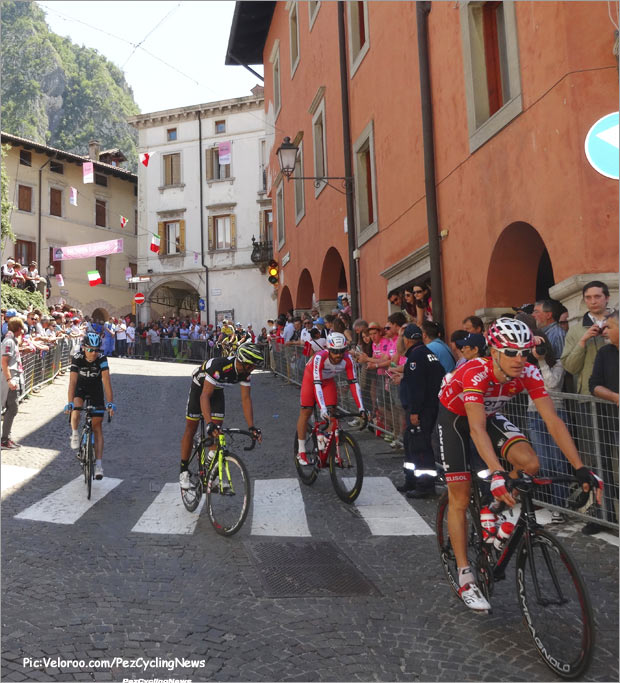 Gemona del Friuli really did turn it on for the depart, an unbelievable atmosphere in this small village. 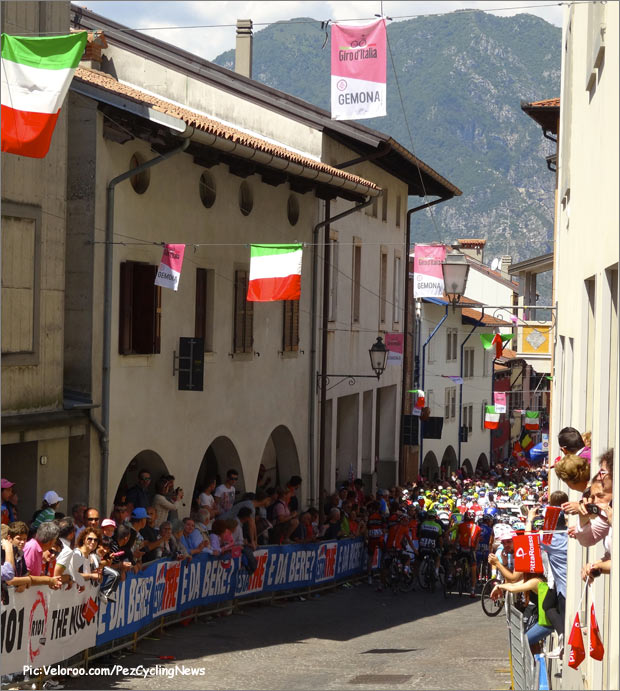 Looking down the hill to the meeting point, the Dolomites ever present in the distance. 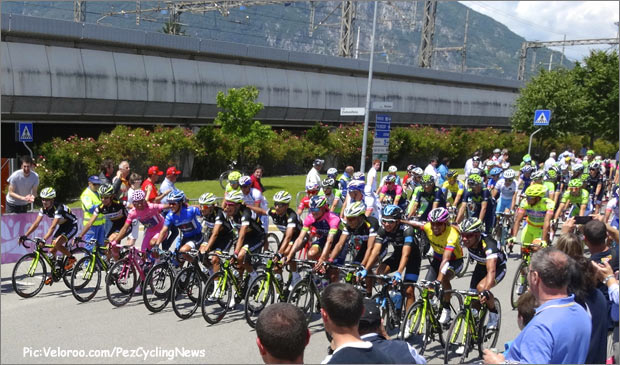 Leaving Gemona del Friuli behind the Columbian contingent celebrated their achievement. Of course it was good management that we caught this moment! Anything is possible at the Giro. 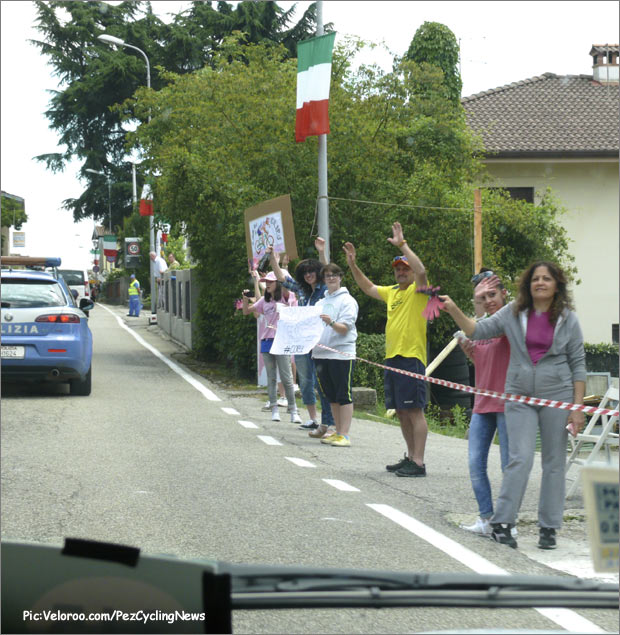 Including jumping on the back of the peloton and caravan for 20 km and pretending we were meant to be there. 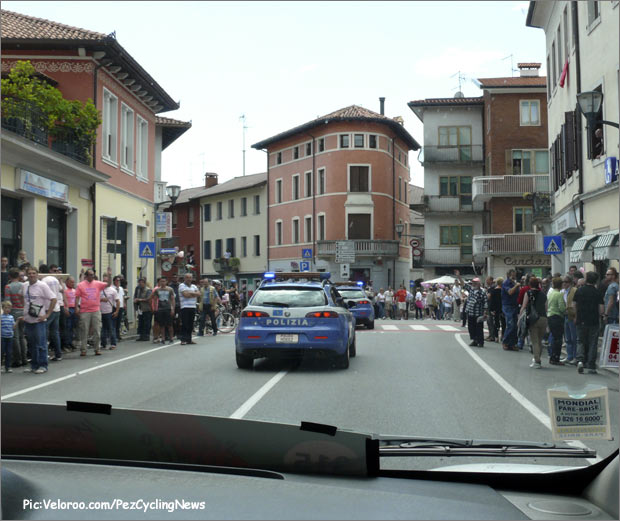 And the best way to act was to continually toot the horn. We soon pulled off to get to our next viewing location. 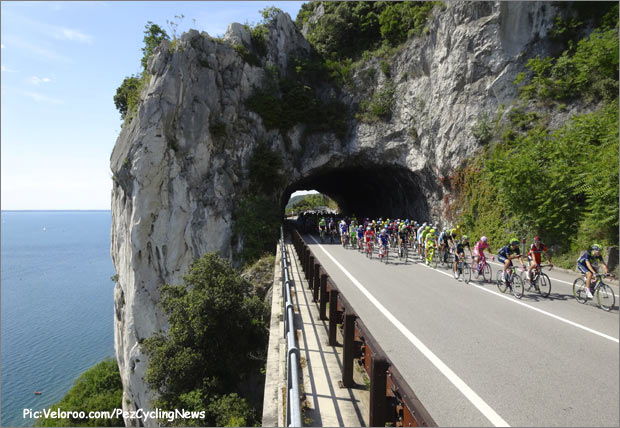 Over looking the Gulf of Trieste, the Giro peloton rolls along the coastline highway. At this point, 10 km out from Triese, Movistar are on the front protecting their man Nairo. 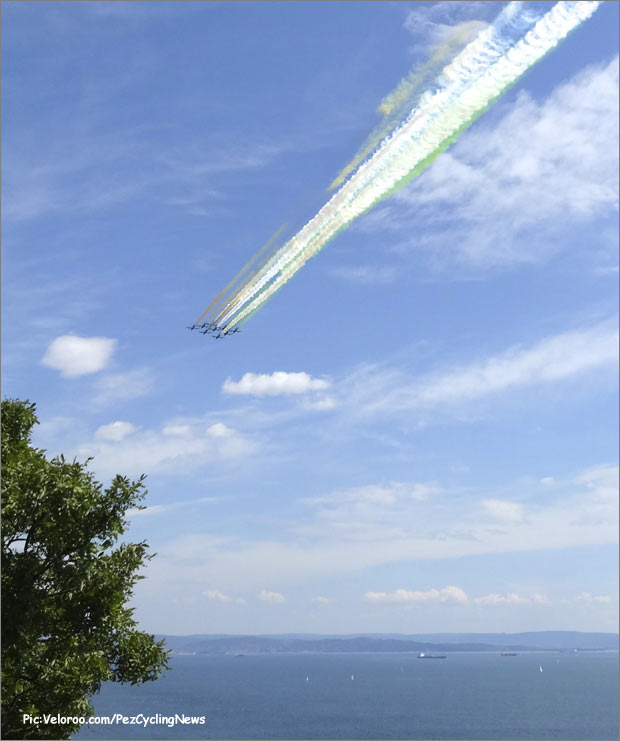 We were given the tip that there was one more special event to take place, a aerobatic display from the Tri-Coloure. We were told that this was the first time in 3 years the organizers could get them to participate at the closing stage, so what a fitting salute to the Giro.

So that is it for us. Julia and I thank you for reading out Giro adventures. We leave the Giro with many incredible memories. The people, the scenery, the food, wine and coffee were all amazing, but most importantly the riding was sublime.

We hope that in some way we have inspired you to come over and see this incredible event first hand for yourselves. It took us way too long, but won’t leave it so long for next time.

Thank you to PEZ and the guys who covered the first 2 weeks for the opportunity we are grateful.