ROADSIDE St.21: Sunny skies and a 5.5 hour jaunt out of the mountains made for a perfect final day on this 2013 Giro d’Italia, and our roving scribe was there to bring it all home as the race rode its last leg into Brescia.

I took notes on all of the seven laps of the Brescia finishing circuit but they all said pretty much the same thing; ‘compatto, QuickStep on the front!’ 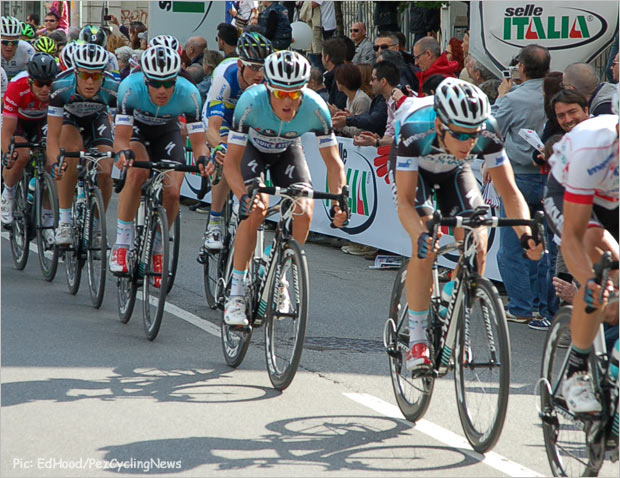 There was no way a lone rider could hold off the QuickStep stampede around the seven laps of Brescia which ended stage 21. And anyone who says the team hasn’t gelled will be keeping quiet – five sprint stages, five wins and Cav takes the maglia rossa.

On the early laps, Bardiani were there to assist the boys from Belgium – for Sacha Modolo, and Cannondale too for Viviani; but second and third respectively was as good as it got for the Italian squadra.

Astana keep their man out of trouble, bringing him home for his second Grand Tour success – after the Vuelta – but his first Giro win.

But we have to moan a little, before we go any further. Brescia is a nice place; but it’s not a special place like Milan or Rome – or Verona. 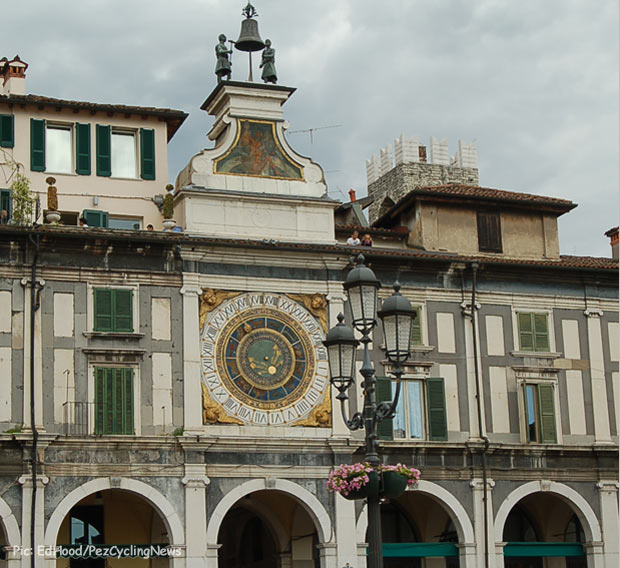 Apart from the Piazza della Logia, it could have been a criterium in just about any town in Italy – albeit conducted at warp speed. There was little of the sense of occasion there is at le Tour when you cross the Seine and first see the Eiffel Tower.

Far be it from me to tell the organisers what to do but they should have a fixed, memorable parcours for the finale. The circuit in Rome a year or two ago was fabulous.

When you look out of a PEZ digs window in the morning you’re never sure what to expect. 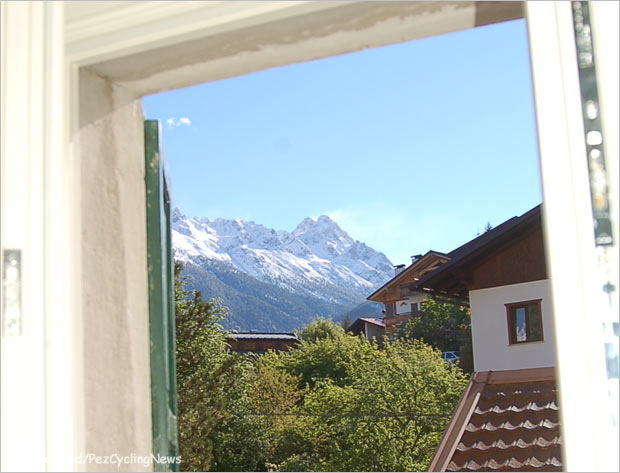 Yesterday was nice but today was glorious – blue skies, stunning peaks, a ‘good to be alive’ kind of a morning. And to our delight, there was a newsagent in the tiny village where we grabbed our Gazzetta; it does Vincenzo proud with the whole ‘wrap’ of the paper devoted to the Sicilian.

And you won’t hear us arguing with that. 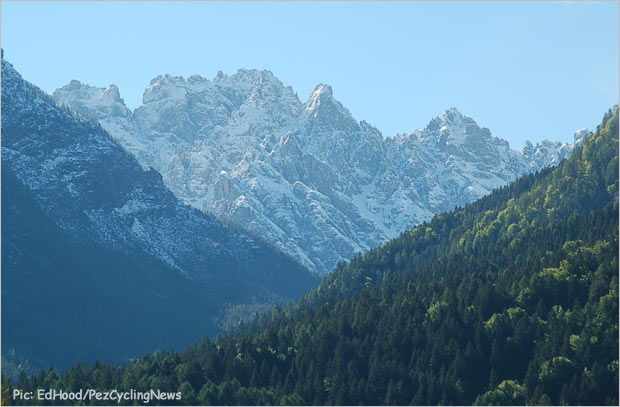 The views on the way down out of the Dolomites were amazing, each one more spectacular than the last – a nice contrast to yesterday’s murk.

Despite this being an ‘exhibition’ stage it’s deadly serious for the sprinters – and Cav in particular. If Cav wins today and – as is likely – Nibali doesn’t score any points, then ‘the Missile’ will take the maglia rossa back, having lost it to the Sicilian, yesterday.

The stage is flat and climaxes with seven laps of a 4.2 kilometre circuit in Brescia.

The satnav says eight kilometres to the start, the sun is out and we don’t exit the ‘Giro bubble’ until tomorrow – la dolce vita! 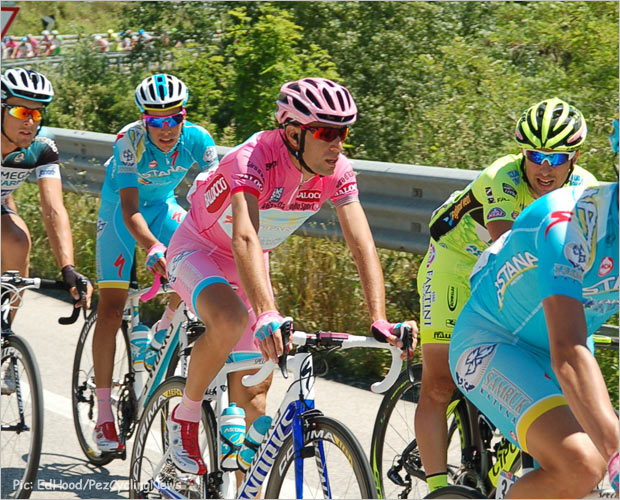 The start area was ‘Cita di Congestion’ so we decided to head straight for Brescia – but not before we caught site of Vincenzo out on the percorso in the first hour with two QuickSteps already at the head of affairs.

Once in Brescia, we walked the circuit to get a proper feel for it – pan flat, lots of it wide, plenty of corners but nothing too technical. 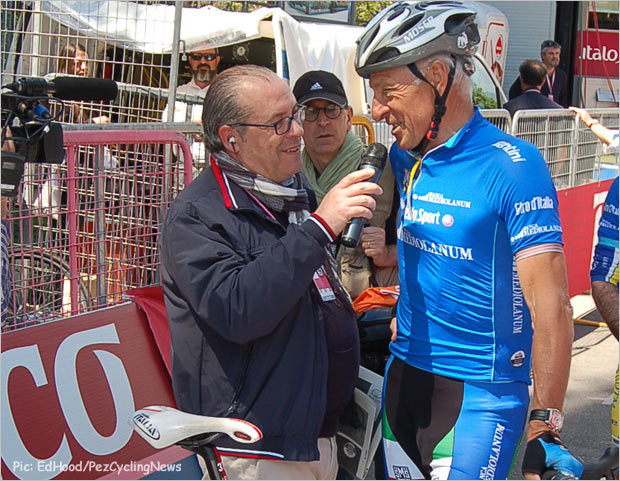 On the finish line, Francesco Moser was telling everyone about when he won the Giro… 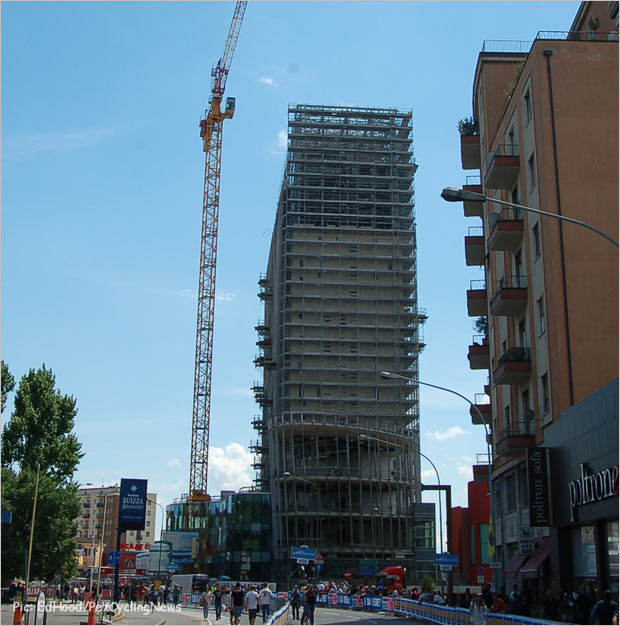 At the bottom of the finish straight another high tech tower was thrusting skywards to add to the modern architecture which punctuate this commercial city’s skyline. 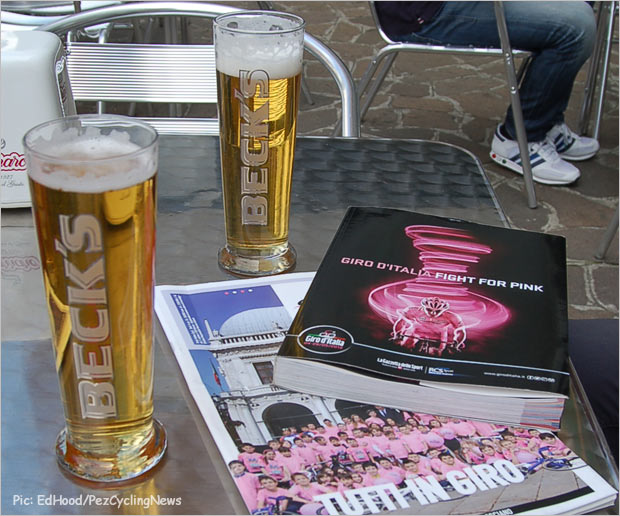 With a K in our legs we entered the feed zone – cheese and ham toasts and a Becks beer, all the way from Bremen. Ironic that in the home land of Peroni and Moretti they serve you a German beer, but it hit the spot.

After that scary mountain rodent mascot thing had done a lap or two on a rather nice fixie, it was time for Astana to sear into town with Vincenzo well placed to stay out of bother.

The first lap saw Astana still well to the fore but the vanguard was turning a different colour of blue as the QuickStep Legion massed. 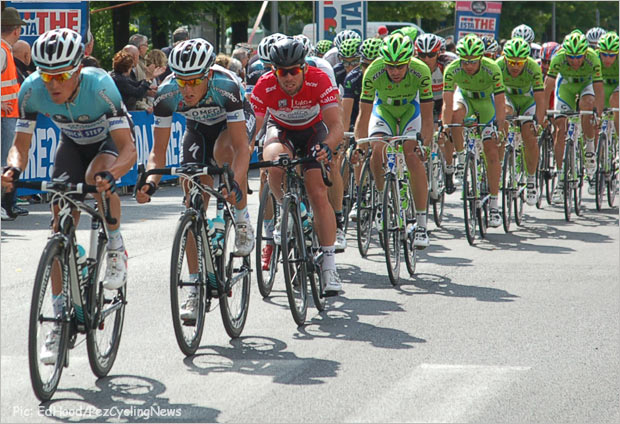 Lap two saw Ermeti’s moment of madness and already Cav was near the front. With Cannondale dreaming big dreams for Viviani and Nibali looking ice cool.

As the laps counted down we walked against the race, looking in vain for photo opportunities but we were reminded that Brescia is a city of the arts with many posters up for the theatre and opera.

Saxobank’s Evgeni Petrov had been blasted out the back by now and began his lonely laps of Brescia. 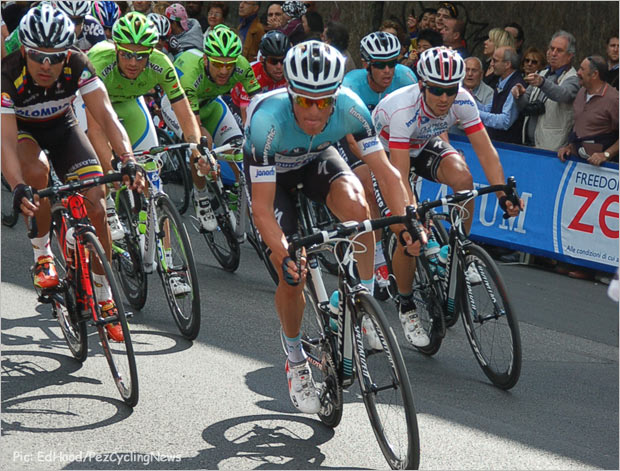 Lap four and the Belgian train was in full flow, no intrusions from any other team – just Keisse, Golas, Pauwels and the rest blasting it. Into laps five and six, the same story with the bunch getting longer and thinner by the minute. 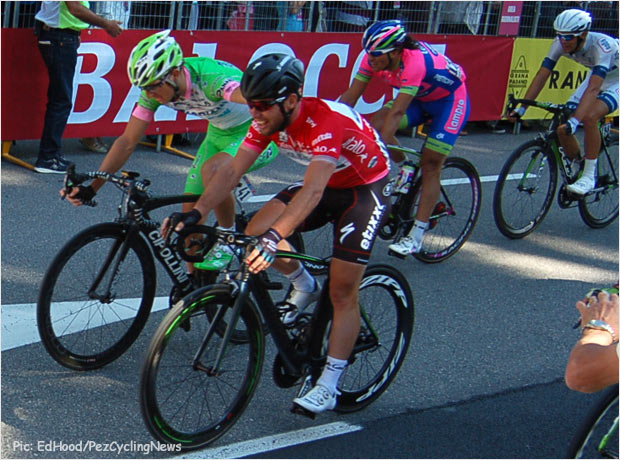 The last lap was warp speed with QuickStep maxing out there was little doubt that Cav would finish the job. Five out of five for QuickStep; main man Patrick Lefevre will be smiling over his brandy, tonight.

Time for some finish area shots. 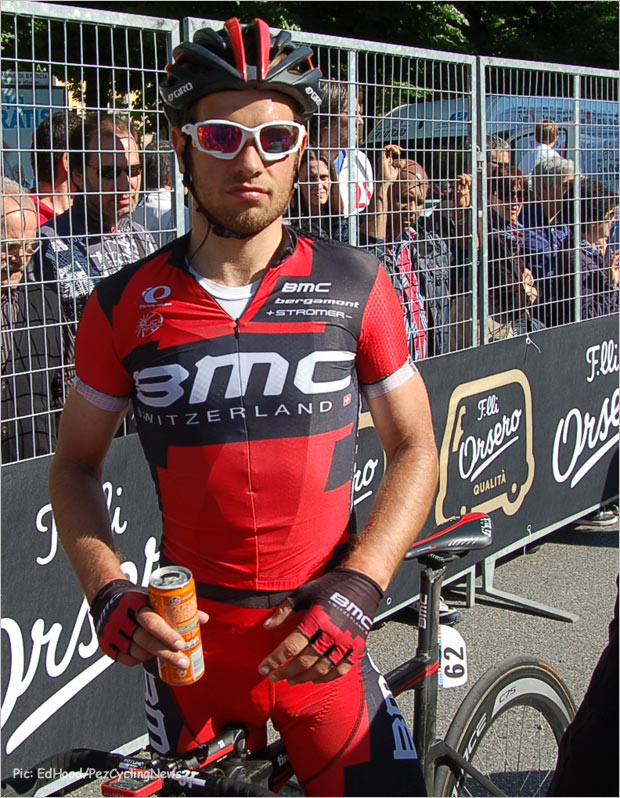 Adam Blythe’s first Grand Tour finish – he looks a tired boy – yesterday on the Tre Cime was a horror story for everyone; except Nibali and Uran, that is. 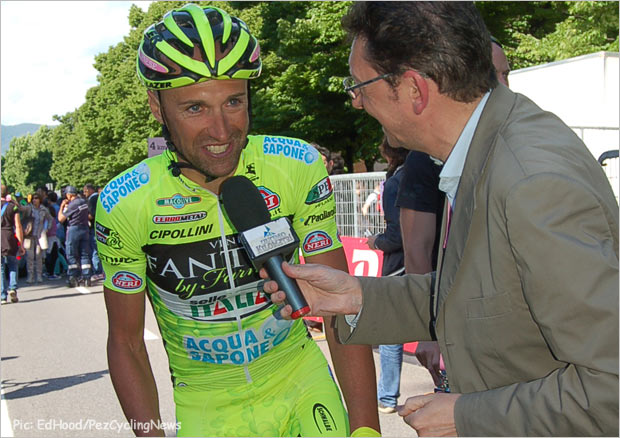 Stefano Garzelli has to answer questions about riding his last Giro – what he really wants is to see his wife. 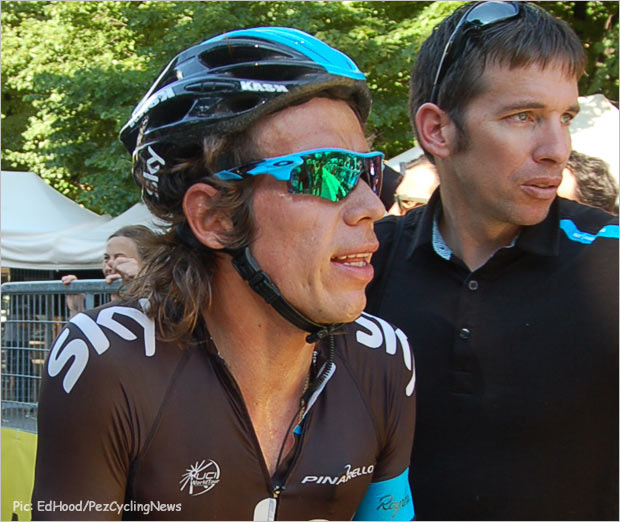 Sky’s Press man Dario Cioni chaperones their second place finisher, Rigoberto Uran – he won’t be doing that next year; Uran has big ideas which don’t include being a gregario for Wiggo and Froomey. 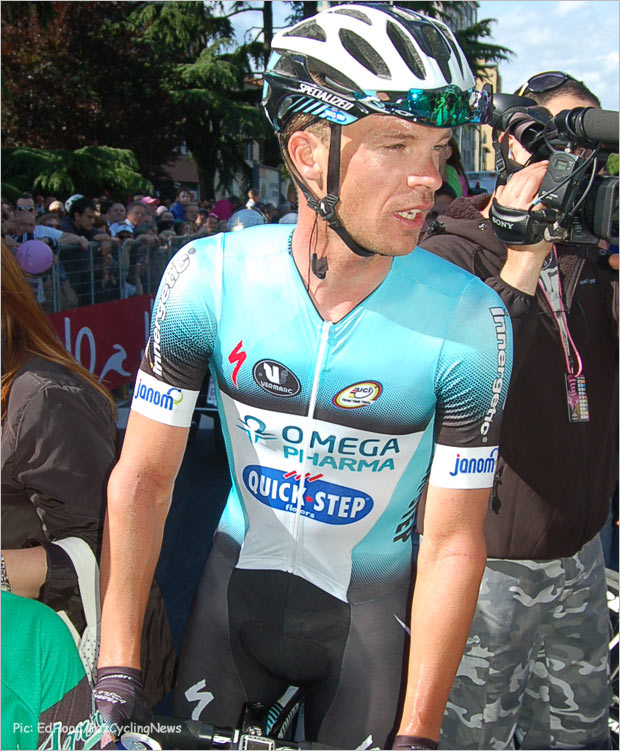 QuickStep’s Iljo Keisse has just finished his first Grand Tour – that’ll make him even harder to beat in the six days.

Dave tells him that he’ll buy him a drink in De Karper – Iljo’s dad’s bar in Gent – come the winter, the Belgian smiles.

And with that it’s time to push through the throng and head for the hotel to sort out the words and pictures. We hope you enjoyed your trip to Italy with us, thanks for reading; see you at le Tour!