Roadside Giro St.16: We’ve finally let Ed Hood out of the dog house and loose on the streets of Italy as he takes over our roadside duties at the Giro. Direction pressroom, bar and the final climb of the day!

Andrate nil – Movistar 3; it’s not a good day to be an Italian fan – albeit Vincenzo Nibali is a day nearer to glory in Brescia. 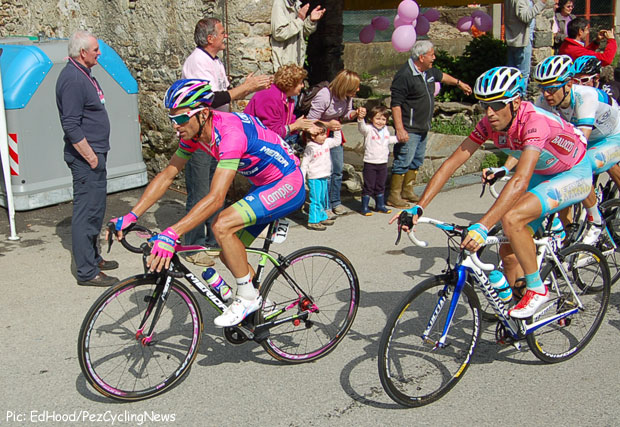 We’re high on the Andrate climb and despite the presence of Italian favourites Nibali (Astana), Scarponi (Lampre) and Pellizotti (Androni) leading over the summit; the mobile phone boys have done it again – Intxausti this time, after Dowsett and Visconti.

The crowd around the big screen TV melts away and Dave pilots us off to do battle with the barrier stripping crews’ articulated lorries as we begin the struggle off the hill.

‘Welcome to Italy!’ says Massimo Garavelli as he pays for our cappuccinos. He heard our Scots accents, got chatting to us and insists on paying for our coffees. He’s a friend of our compatriot Graeme Obree from the days when the man from Ayrshire was setting the world on fire on Specialized wheels – the company Massimo works for. 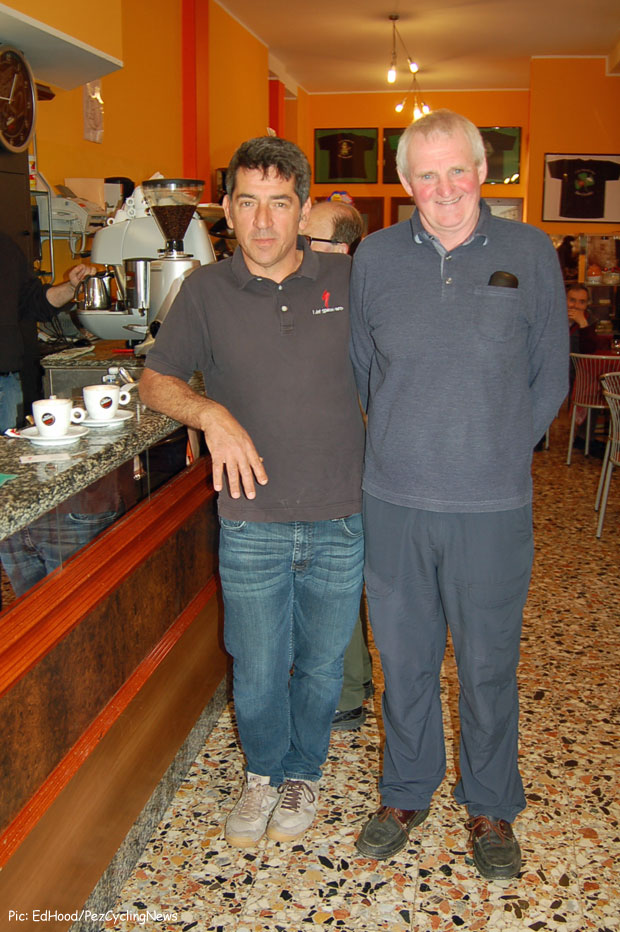 I suggest grappa all round but Massimo frowns, ‘too dangerous before lunch time!’ We’re in the stage finish town of Ivrea to pick up our creds – but first we needed a proper coffee and a Gazzetta. The town is ‘en fete’ for the Giro and there’s pink everywhere. And Ivrea is taking advantage of the Giro spotlight to publicise the annual three day ‘Battle of the Oranges.’ 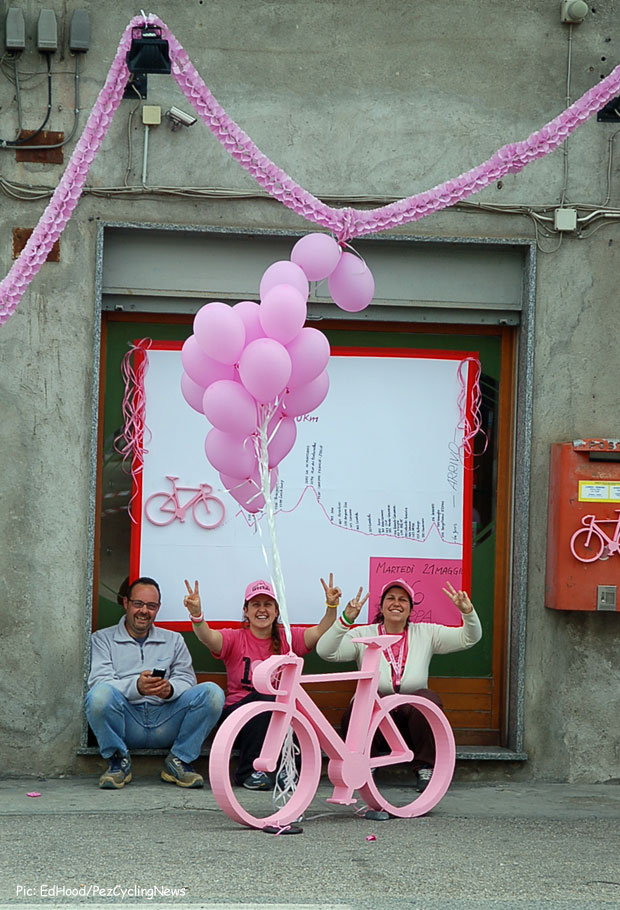 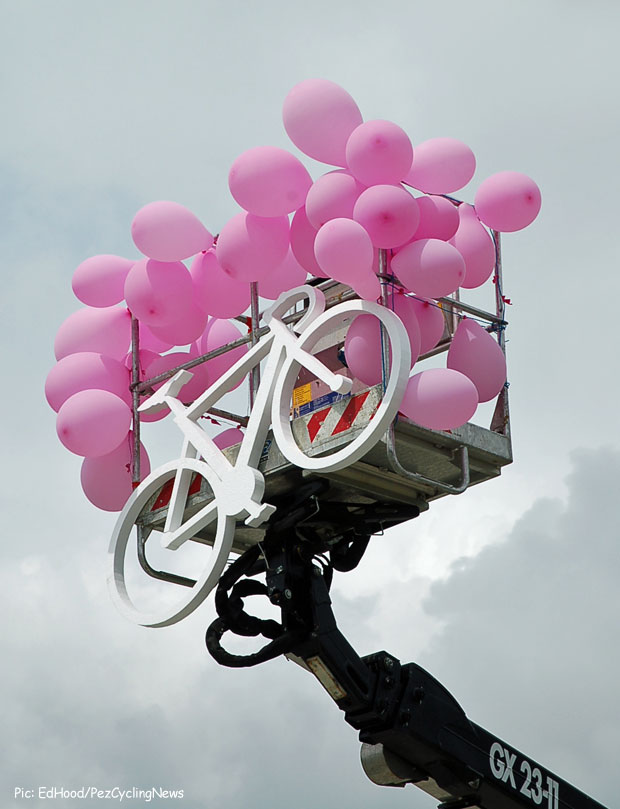 The whole town and hundreds of visitors pelt each other with oranges; the town is covered in orange pulp – and there’s polenta and cod served all round, the morning after. 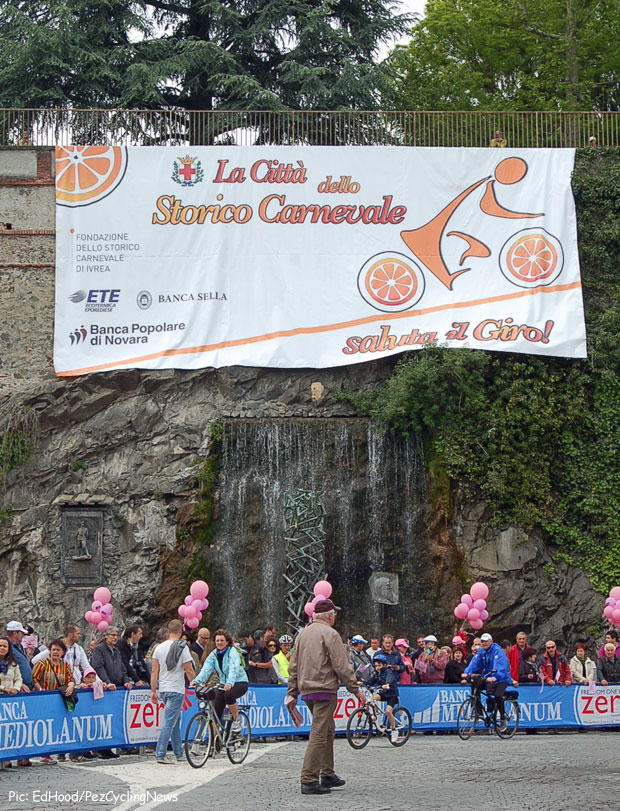 Next up it’s time to get the vital bits of plastic which open all doors, allow access to all roads and even have usually stern policemen giving you a smile – the ‘creds.’ Two stickers for the Peugeot and a plastic badge to dangle round our necks.

We were a wee bit early for collecting them so headed for the buffet which the local town usually provides for the gentlemen of the press. Usually we miss the free chow because we’re out on the percorso somewhere, but not today. 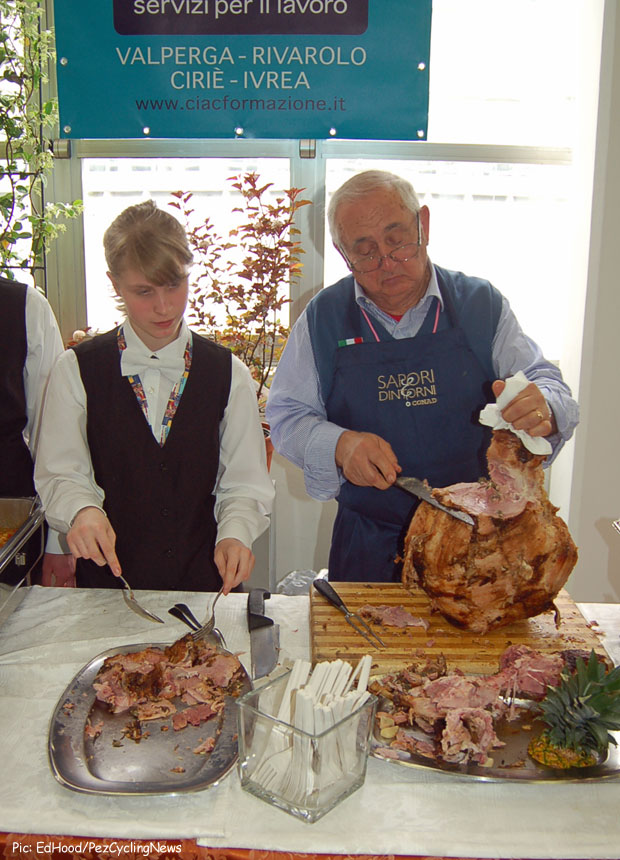 There’s beautiful cold cuts of ham, cheese, fresh fruit salads and the finest of sweet, sparkling wines – ‘the same method as Champagne’ explains the gentleman who’s on hand to keep us informed. Everything is served by immaculate, polite staff – we could get used to this.

We’re still a little early for our creds so wander down from the press centre to the finish straight where the posters for the Lega Nord remind us of the big North/South divide in Italy. 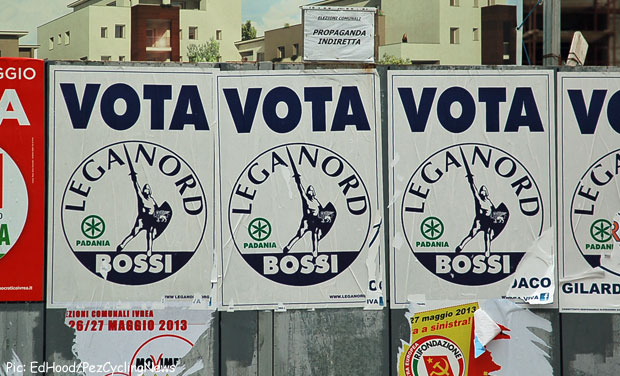 The Lega Nord wants ever more autonomy – if not total independence – for Lombardia which it maintains is ‘carrying’ the south of the country. 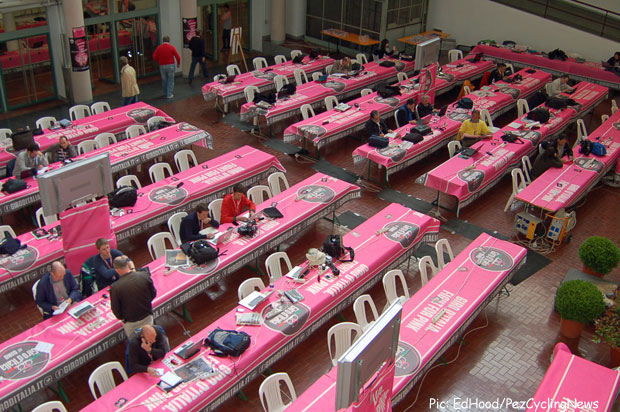 Back at the Quartier Tappa we finally get the precious plastic and we’re offsky on the day’s adventure. 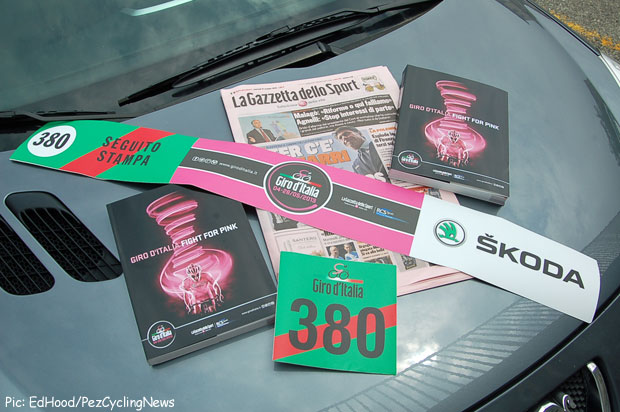 The race passes through Ivrea with 35 K to go before looping back out into the countryside to take in the Andrate climb, a nasty, technical six kilometre job. After the drop off the Andrate it’s flat and fast back to Ivrea and glory for someone. 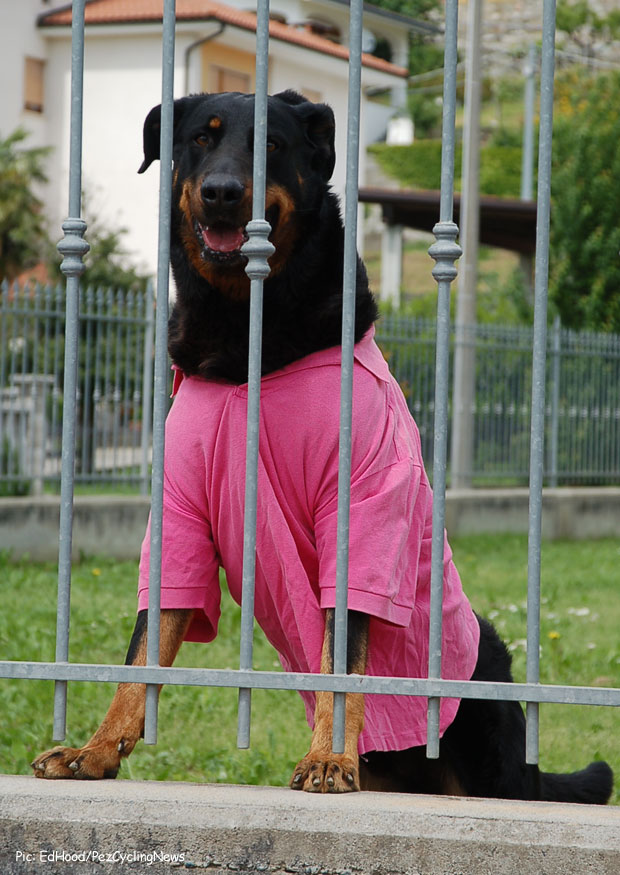 Everything is pink on the drive up – balloons, bikes and even the dogs.

The sprinters won’t win today – it’s way too tough, changing gradient and width as well as having some poor surfaces. One kilometre from the top we see our spot – a neat beer tent with the smell of burgers, a big screen TV and plenty of interesting characters. 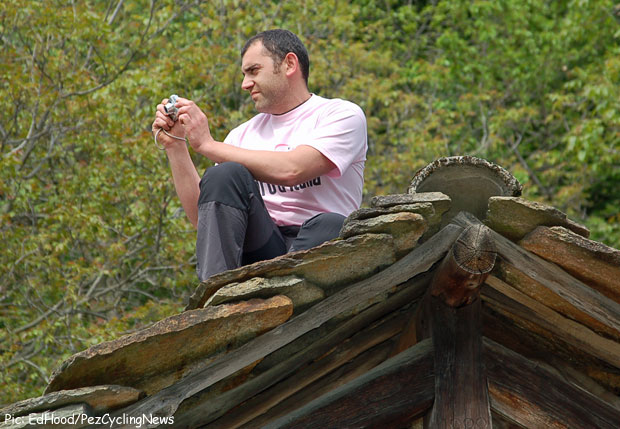 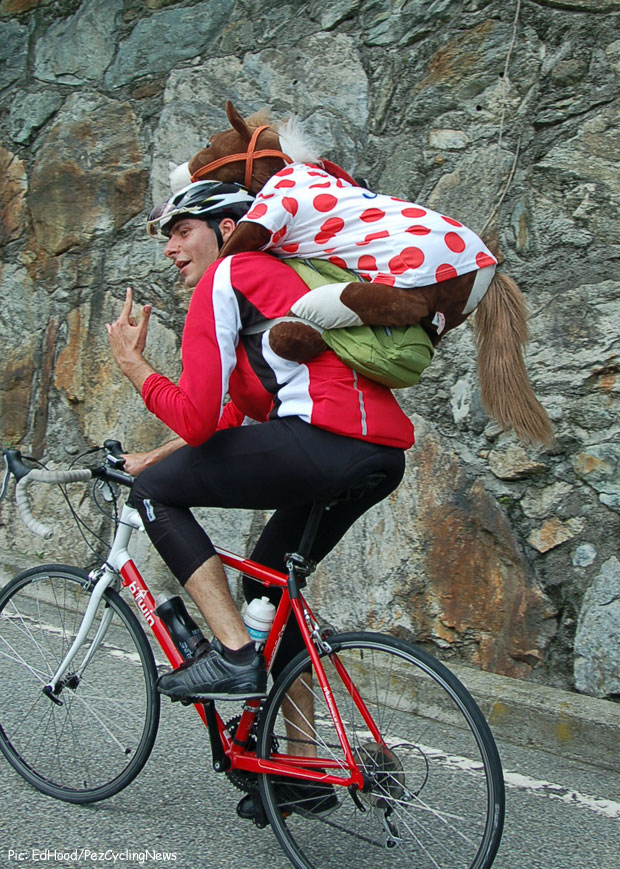 There are guys on the roof, guys carrying bizarre horses and room to shoot pictures. Park this Peugeot please, David! 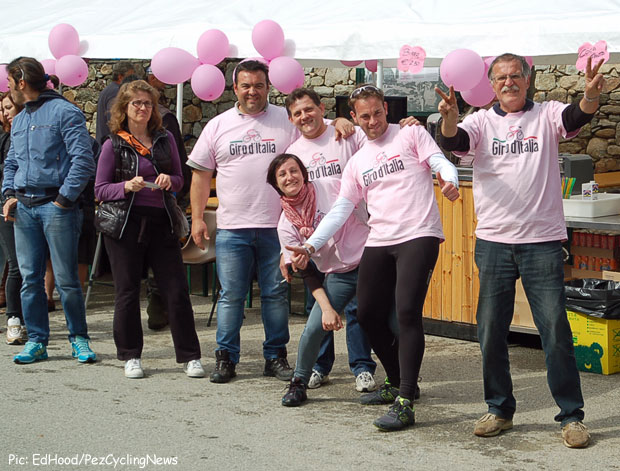 The beer is good, the sun is hot and there’s a breakaway on the TV; but they’re not co-operating, attacking, countering – not the smooth flow you need to build the gap. The beer flows, the chat gets louder and so does the running commentary on what’s happening on the screen.

Motorbikes, cars, T-shirt vans, police cars – and then the helicopters . .

The last we heard before we scurried away from the big screen was that Navardauskas was clear for Garmin. But by the time race arrived it was the ‘Bigs’ at the head of affairs – Scarponi, relaxed; Nibali, sharp as a tack; Evans looking like he was on someone else’s bike; Uran, chunky and strong . . . 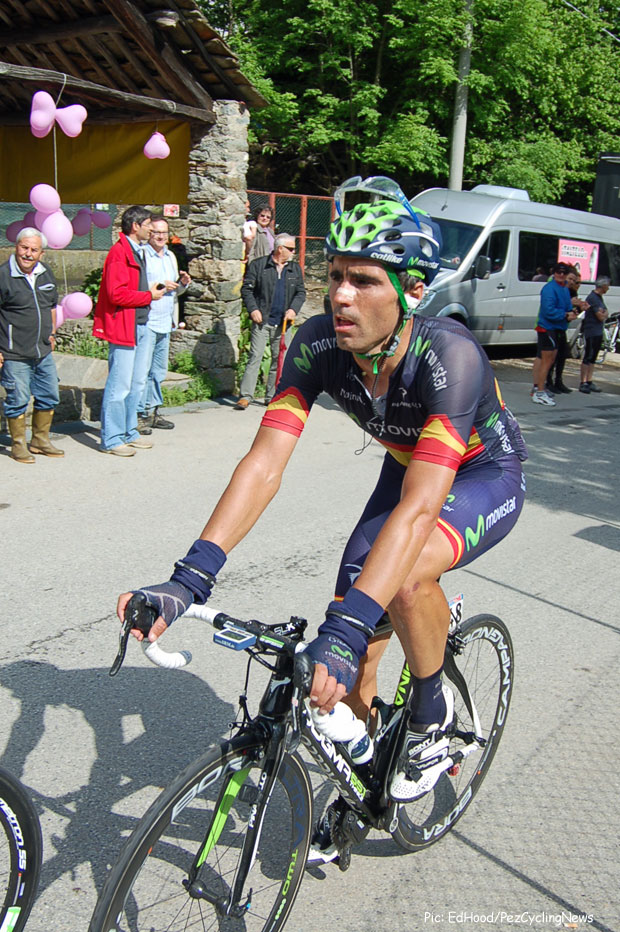 Galibier winner Visconti just off the back and there are some other strong men shelled – QuickStep’s Polish champion Golas and Movistar’s Spanish champion, Ventoso. 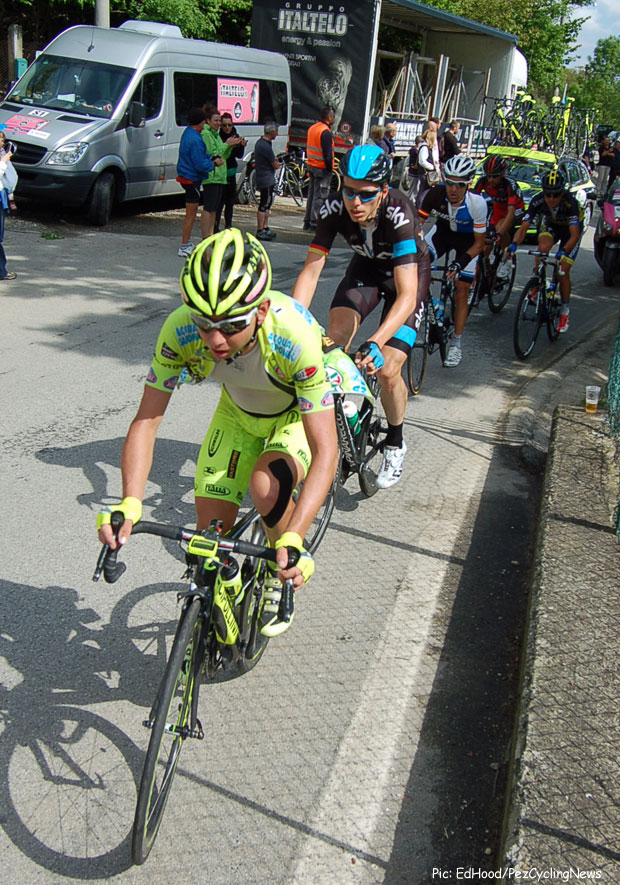 And it’s ‘Bad Day at Black Rock’ for Vini Fantini’s Mauro Santambrogio, he was fourth this morning @ 2:47 – he won’t be tonight. 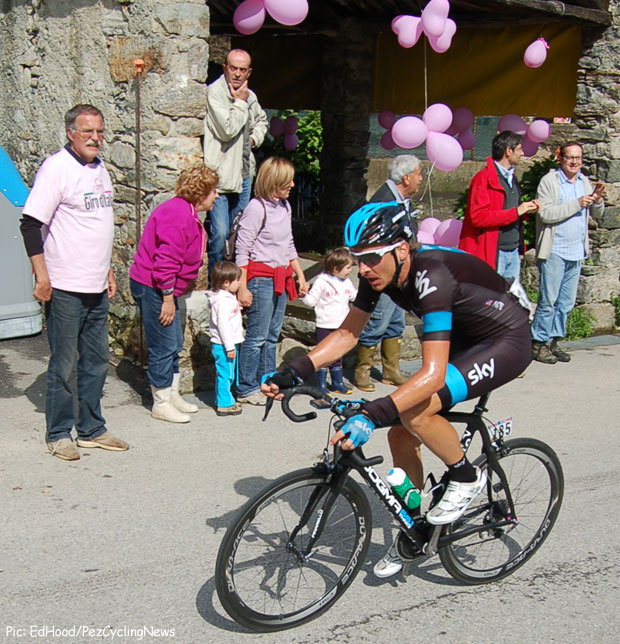 Danny Pate was grabbing the limelight in the break just a wee while ago – now he’s just another big guy battling the gradient. 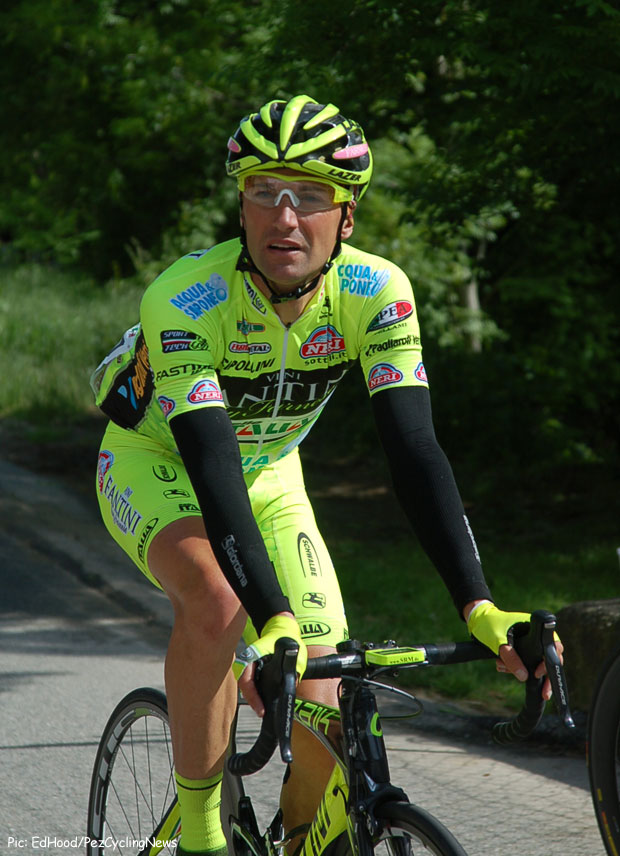 Former Giro winner Garzelli (Vini Fantini) ambles past and tries to spot the race on the TV – changed days . . . 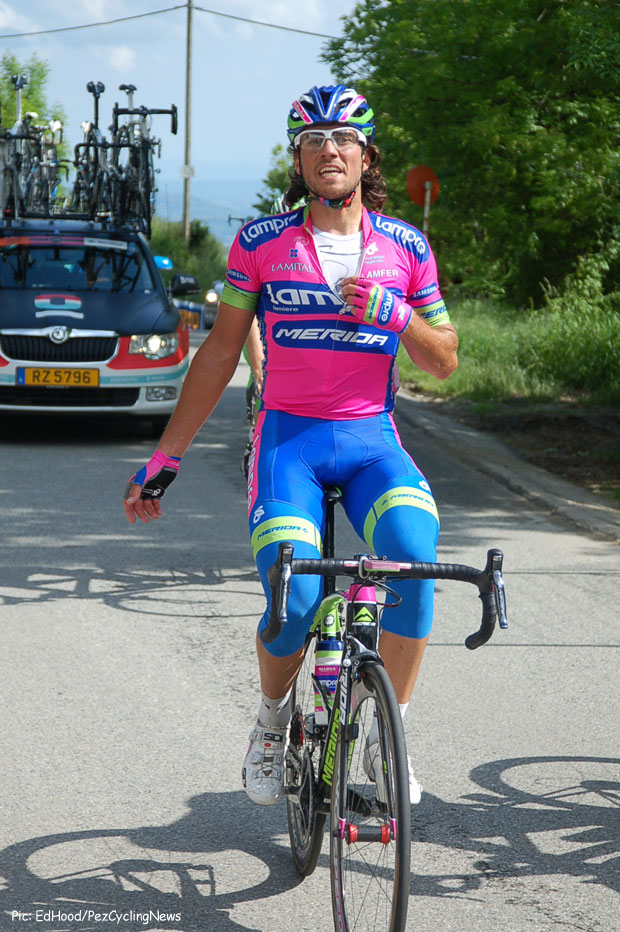 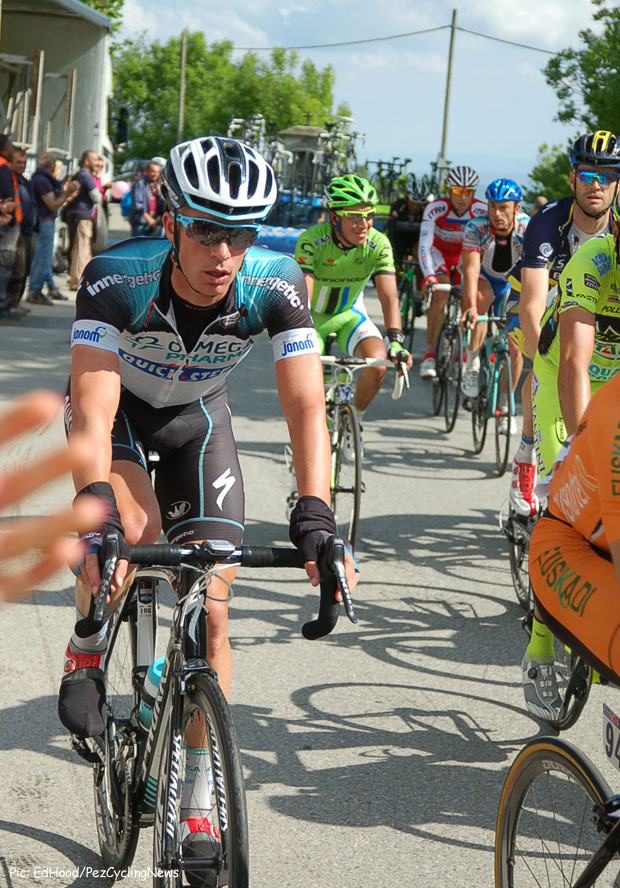 And whilst Iljo Keisse (QuickStep) is king of the Kuipke Velodrome in Gent, he’s just another face in the gruppetto on the Andrate. 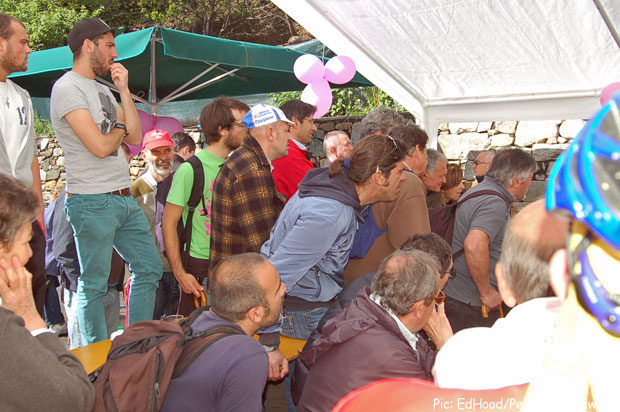 Back to the tele, necks crane, cries of ‘Vincenzo!’ ring out, but three are clear; a Pole – Niemiec for Lampre, an Estonian – Kangert for Astana and a Spaniard – Intxausti for Movistar. Niemiec is a big strong boy – but goes way too early and Intxausti wins at a canter.

Cue silence in the beer tent and immediate exodus. Not a good result if you’re from Andrate, then? Us?

We loved it – tomorrow it’s Carravaggio to Vicenza, 214 K with the organisation saying one * difficolta, but the Gazzetta saying it’s a ** pain day. There’s another pesky late climb making it unlikely it’ll be a pure sprinter who wins – but Cav wasn’t so very far away over that climb, today . . .