ROADSIDE St. 4: It’s one of my favorite race day strategies – going fly-on-the-wall and watching the fans watch the action. The clouds parted at just the right time to bathe the start in Policastro Bussentini with warm southern Italian sun, and smiles were ordered all around.

We’re some 200km into the proper ‘south’ of the boot – if using Naples as the border makes any sense – and it does if you’re Italian. But the Giro’s an international spectacle, and sport is the great joiner of people, so any differences were promptly forgotten as the mood was indeed jovial and everyone was friendly – regardless of your place of birth or team colors. 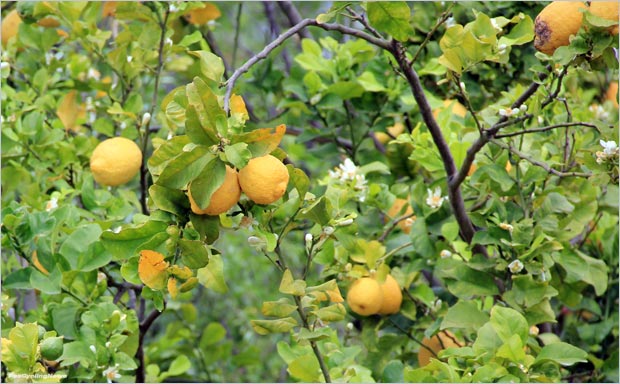 We’re also on the geographic 40th parallel down here – and that means warm temps for most of the year. It’ll get smoking hot come summertime, but May is fantastic weather for shirts & shorts. Coming over from the ‘Great White North’ I’ve been struck by the fragrant flowers in bloom, the tropical plants everywhere, and the abundance of orange and lemon trees. I get my citrus at the store that’s imported it from someplace else and let it ‘ripen’ in the shipping bin. You know how good that tastes. Around here there’s no such thing – you want a lemon – just pick one off the tree. And squeeze it – more juice than I thought possible to pack into the succulent sphere. 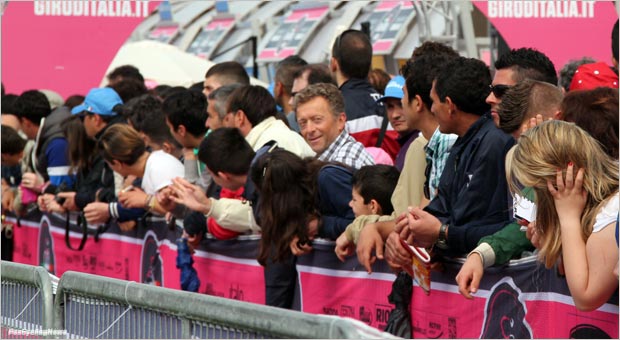 Now to the race – and the people who make it special. The economy remains hard down here – it has been for decades, but maybe that’s toughened peoples’ resolve and while I suspect these folks could teach me a lot about things to smile about, there was no forcing a grin today. Italians love their Giro, and crammed the start area a good 2 hours before race time. 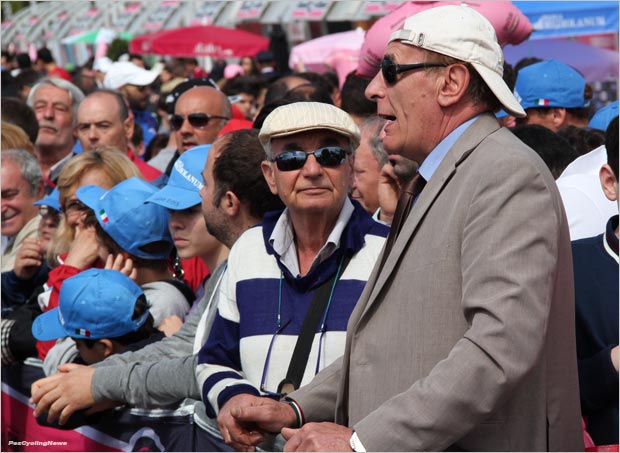 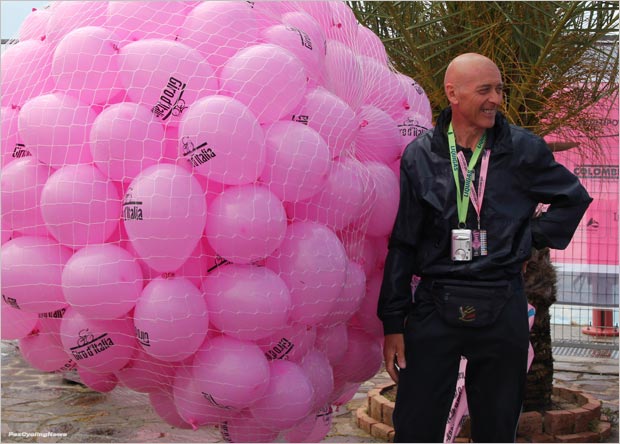 Speaking of the economy – it costs a lot of money to bring a stage of the Giro to town, and most southern towns and cities simply don’t have the budget to spend on the event. But the RCS is behind their race 100% and shoulder much more of the stage costs down here to keep their tour a national treasure. This guy’s job is to manage the balloons that are set skyward at the start of each day’s stage. I’d be smiling too. 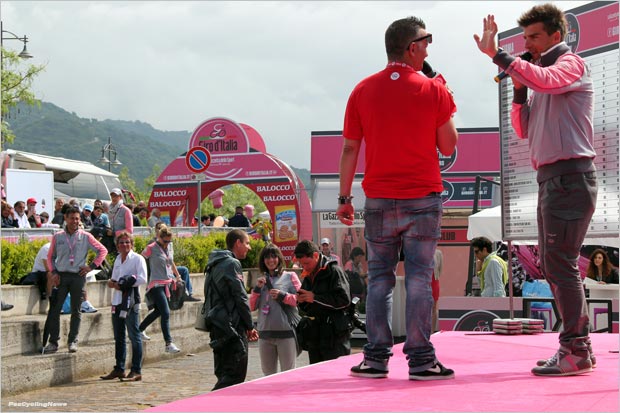 Over at the sign-on area the race announcers took turns bouncing jokes off one another, moving proceedings along and finally introducing each rider as they signed the daily log. But riders wait till the last minute to sign on, and it goes by pretty quick, which leaves some time to fill with sound bites. Ex-pros Marco Velo (on race for the RCS) and Sergei Outshakov (Katusha DS in the white shirt) were happy to play along with one of the gags. 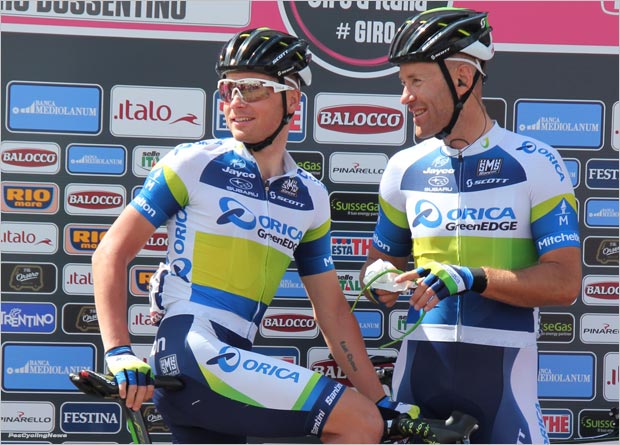 After Steve Bauer retired, Canadian cycling went into a bit of a dark period, with little to no riders in the pro ranks – so it’s fantastic to see so many now riding at pro tour level. By my count, I’ve four countrymen at this Giro, Dominique Rollin (FDJ), last year’s winner Ryder Hesjedal, and Christian Meier & Svein Tuft of Orica-GreenEdge. Svein told me yesterday’s opening curves along the Amalfi coast could have been a lot worse had the break not gone early – which allowed the bunch to ride in relative peace. Svein can lay down the watts against the clock, or away on his own, so I asked if he liked any of the stages for his own. Ever the team man, he confirmed they’re here to work for sprinter Matt Goss, but I’ll be watching for Svein in the stage 8 TT. 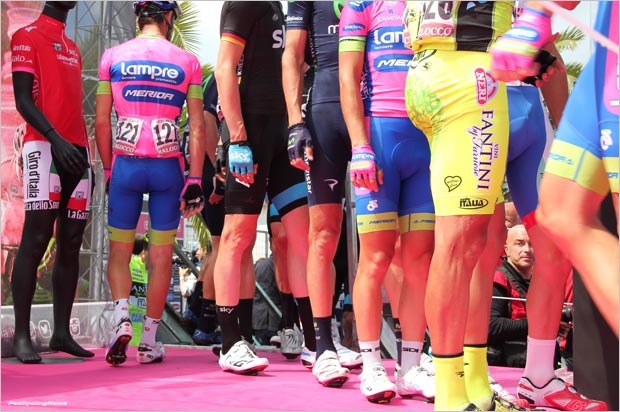 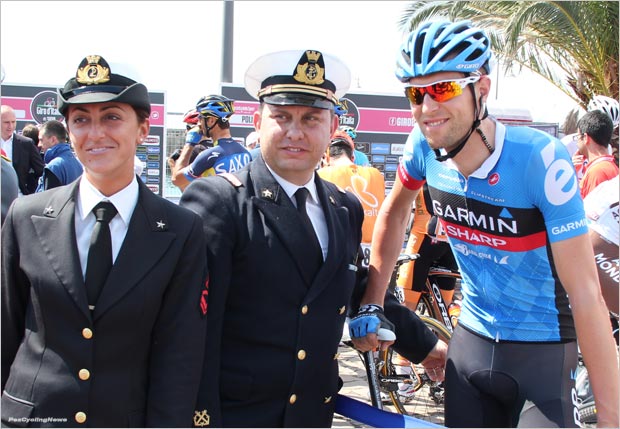 Speaking of Canadians – I nabbed a solid ‘Ryder Moment’ myself. “Right on!” was his response when I introduced myself, and while most of the guys just want to get from sign-on stage back to their bikes with no interruptions, Ryder was all smiles for the local police who asked for a photo. 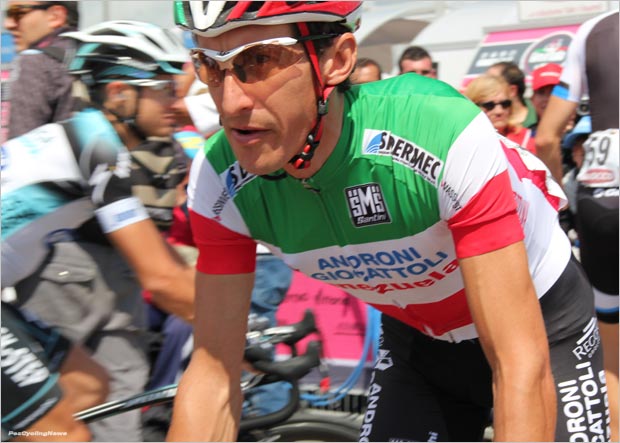 Yesterday I posted that group shot of Italian champ Franco Pellizotti eating fruit tarts – but I think this shot is a much more proper representation of man who’s loved across the land, and is clearly enjoying his time in the maglia tricolore. 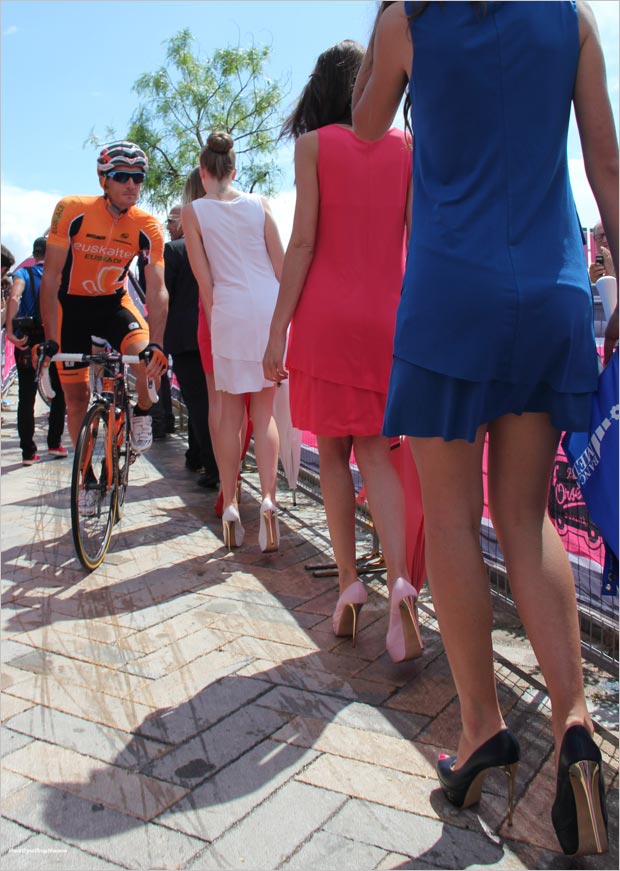 And today’s storyline is faces, it seems checking people out was a popular theme with others as well. 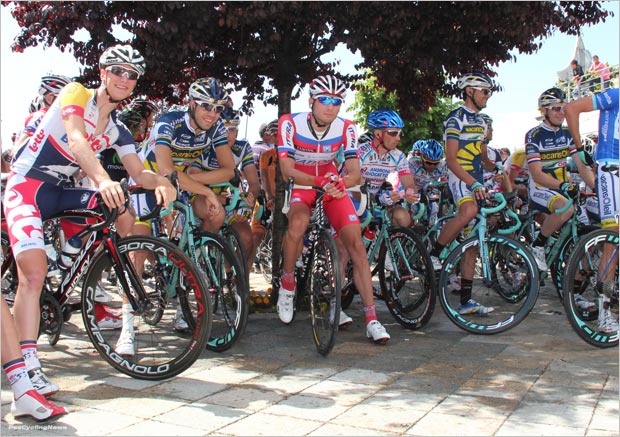 By now the 11:15 race start was fast approaching, so I made my own fast approach to the front of the bunch. I tagged onto the tail end of the umbrella girls who parted the peloton like the Red Sea as they made their way to the front for the final ceremonial photo sessions with the race leaders. 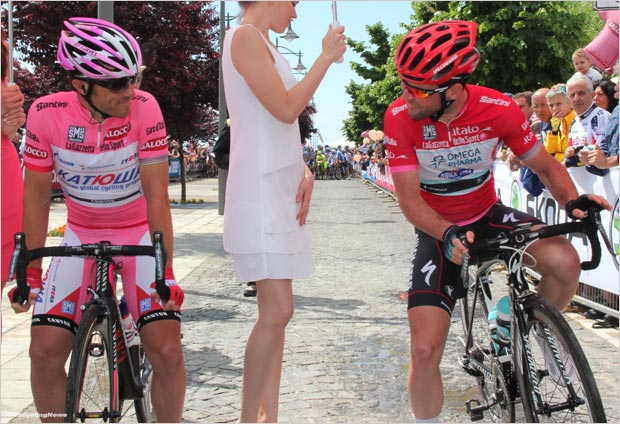 Up front Mark Cav was all smiles too – joking around with the photogs and sharing a laugh with Luca Paolini. 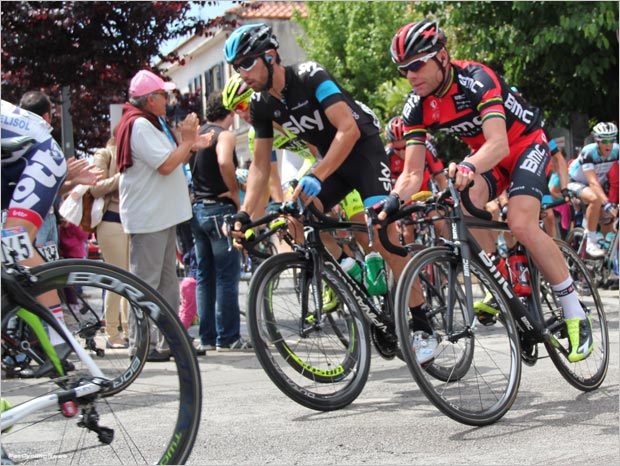 The clock counted down, but even the race officials were chilled as there was a lot less shouting and gesturing to lead the race off. Four days in and things have settled down a notch – and it was a refreshing break from the seriousness that goes with any high level of sport. Overall a nice reminder that bike racing is a whole lot of fun. 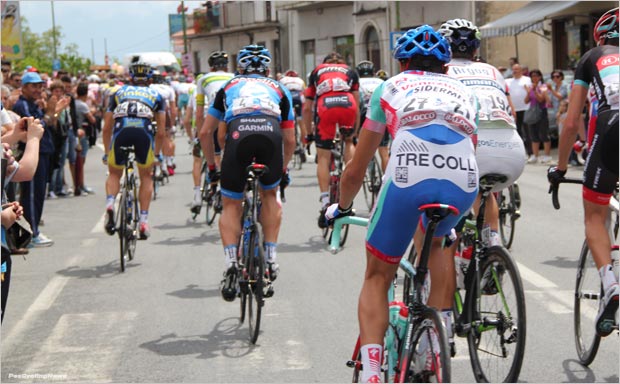 A few seconds later the flag was dropped and the they were off on the 246km stage to the tip of the boot and the climb to Serra san Bruno. 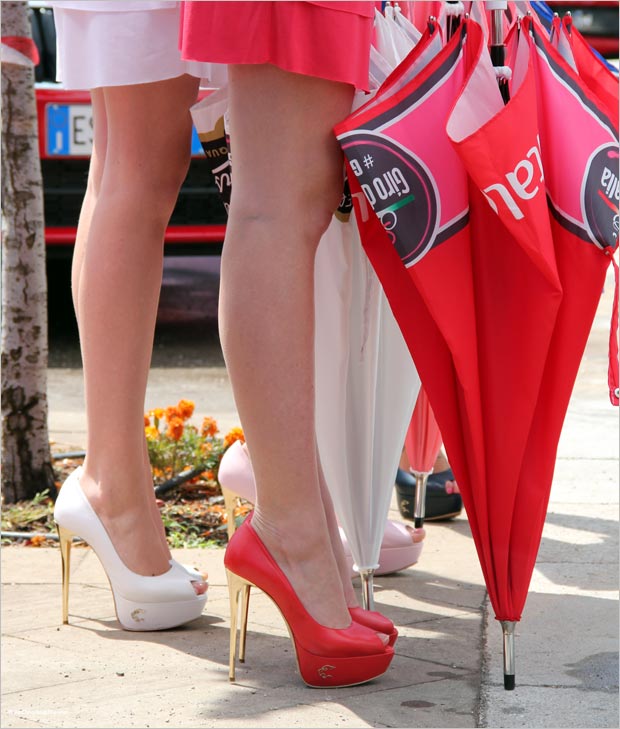 Keep it dialed PEZ and see you tomorrow as the race crosses the foot of the boot to the ancient cave town of Matera.
– ciao a domani
Pez