ROADSIDE St. 8: My guide for an in-race tour of the 2013 Giro d’Italia 55km TT corsa to Saltarra was Garmin-Sharp’s Nathan Haas. And while the number of riders he passed enroute said he was laying down the watts, he claimed at he finish he was “just having fun”. 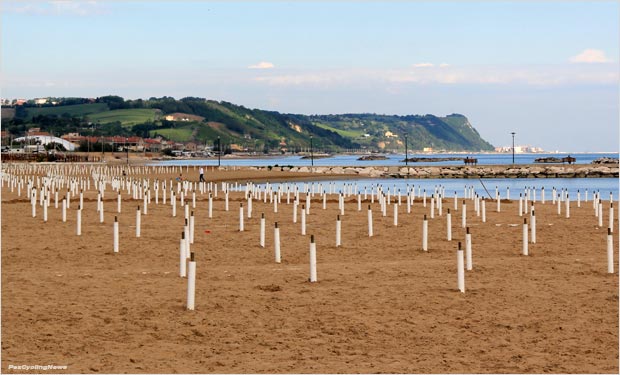 The day was a welcome return for me to the Adriatic port town of Fano – hometown of our own Alessandro Federico, and where I spent a great week with my own famiglia back in 2010 – I was happy to be back, but sad to stay for only a few hours. At least I had time to take in the view north from here towards the day’s stage town of Gabice Mare, and checkout a couple of my favorite cafes before rolling out. 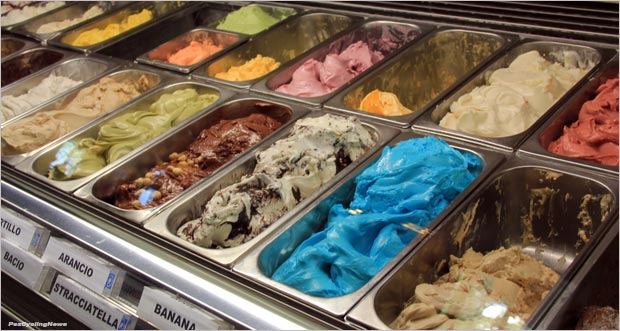 The day’s plan was to chase Canadian Svein Tuft on the ride. DS Neil Stephens had given me a 90% chance of success when I asked if it might be possible – but nothing is for certain at a race like this, and shortly before Svein’s start time, I was told the car was full -. 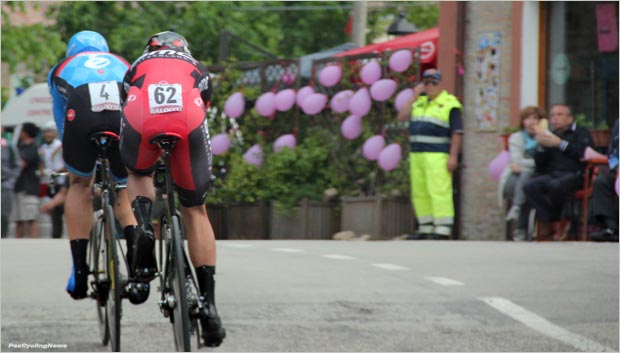 Time for Plan B – which was to take our own car onto the course and use our creds to chase Svein from behind the team car.

I should have sensed danger when we could not find the actual start line – and were told by all of the traffic marshalls that you just can’t get there from here. Good thing this is Italy – where you can always get the answer you want, as long as you ask enough people. 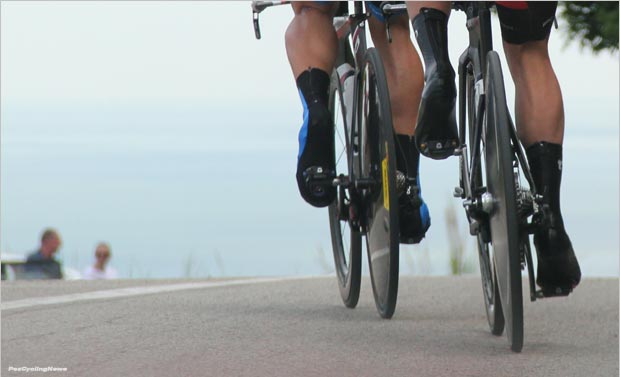 Soon enough we were being flagged onto the corsa just after Ag2r’s Davide Appolonio left the start house. No sooner had we pulled onto the start straight, than Mino let fly a string of “che cazzo’s” that would curl nonna’s hair, and at first I didn’t think we had a problem. 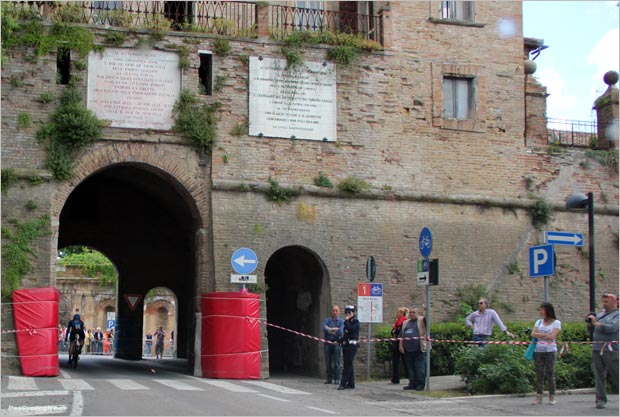 Then he explained that somehow we’d been assigned as the official chase car of Appolonio. It seemed to matter not that we had no spare wheels on board (sort of important for a chase car) – but what mattered to me was that we couldn’t stop to let other riders pass and Svaein catch up. Plan B was down the tubes too. 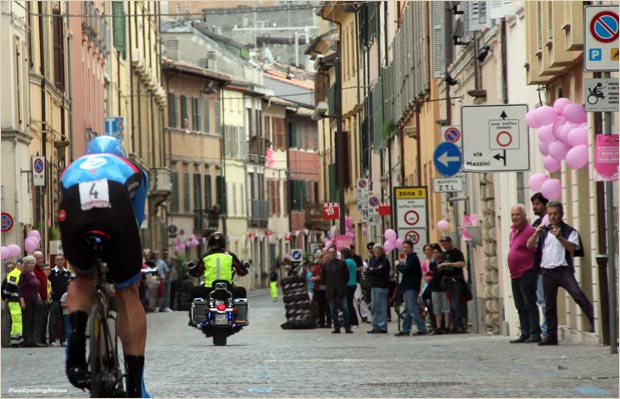 Then Plan C took shape with the speed of the Garmin-Sharp rider coming up behind ‘con molto veloce’. We were barely into the course and the 1 minute man was closing fast on Appolonio on the gentle climb out of Gabice. 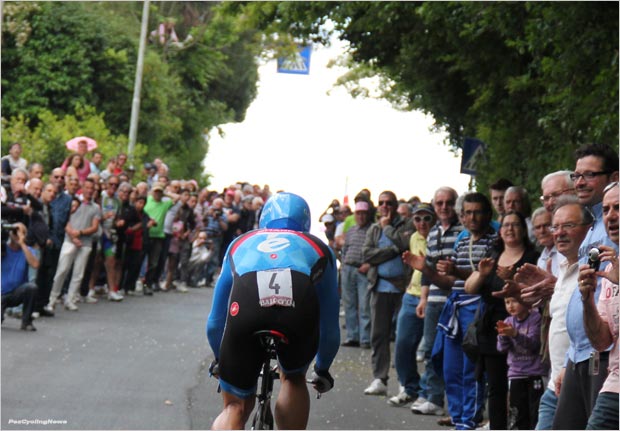 And here’s where a good driver really is worth his weight in negronis. Mino told me to change cars and go with the guy chasing Aussie Nathan Haas – he looked on a fast ride and being English – at least I could ask a few questions at the finish. 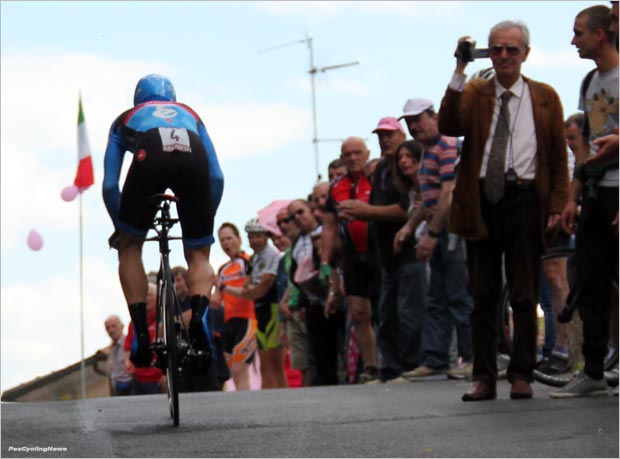 We flagged down the driver of Haas’s chase car so he and Mino could yell at each other across open windows – and boom – next thing I hear are screeching tires as we slammed on the brakes and I jumped into Haas’s chase car. The spare set of wheels in the back confirmed this was a serious operation. 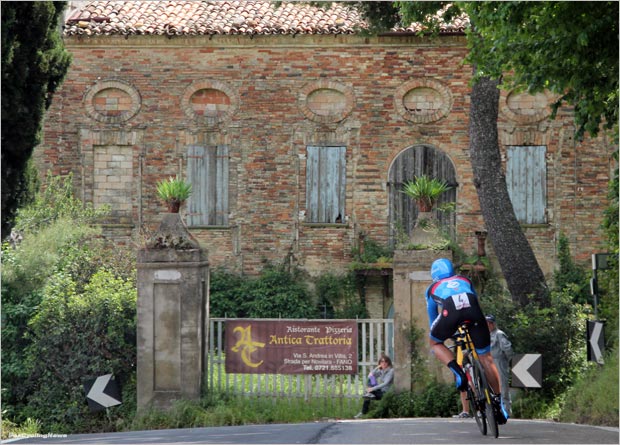 A note on chase cars here is that with 200 riders in the race, it’s impossible for teams to chase all their riders, so local volunteers are enlisted to drive a car and carry spare wheel for the riders less involved in the GC race. My new driver was a local cyclist and fan like me – who’s nephew rides for Cannondale – and in all the excitement, I forgot to get his name! 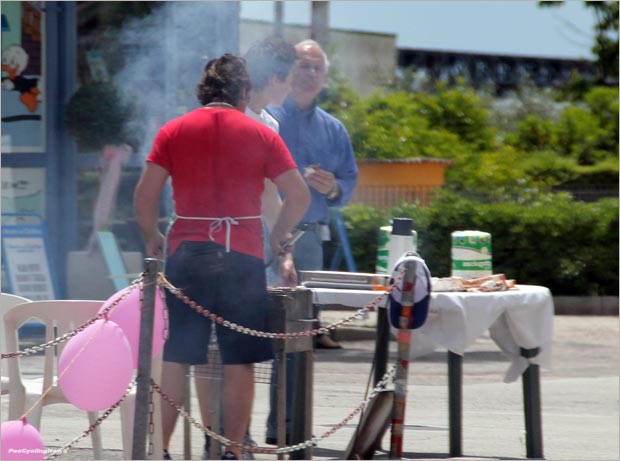 Haas was rolling right along and in no time picked up his two-minute man Adam Blythe of BMC, who refused to let Haas by and slotted in for a few kms of slipstream action. That came to an end on the next climb as Blythe was clearly struggling and just looking for a way to get to the finish – and maybe avoid the time cut. 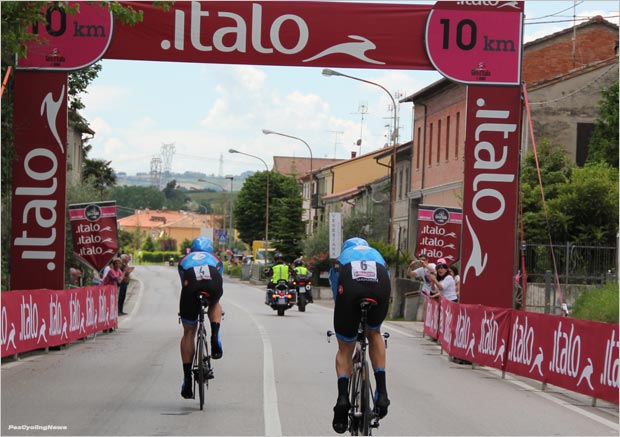 The course was another marvel of Italian geographic beauty – the first part running along a high ridge overlooking the Adriatic coast. There was a strong wind blowing, and the technical nature of the road’s twists, turns, climbs and descents were a real test of bike handling, and raw power. 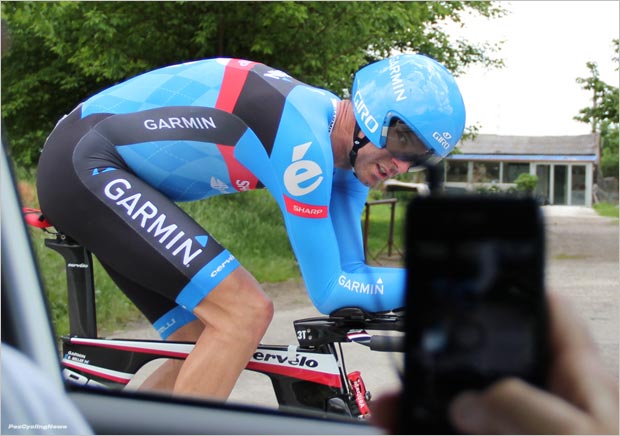 Next in Nathan’s sites was team mate David Millar, a solid chrono man in his day – but on this day, that day seemed a long way off as Haas went pretty much straight by. 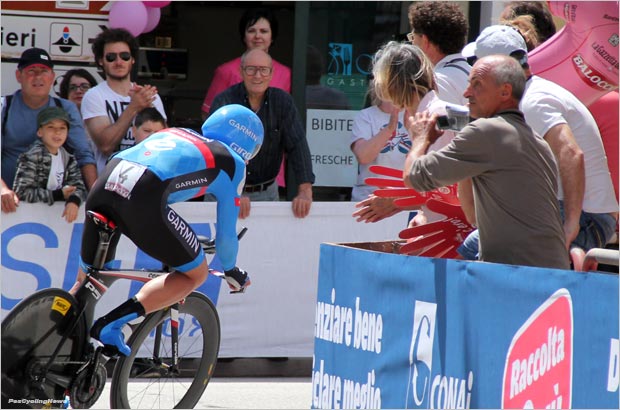 Through the final right hand turn and a 3km climb with ramps to 16% was all that remained of Haas’ day on the road. The climb started simply, then at 1500m to go got serious enough that Haas slipped it to the bottom gear and got straight out of the saddle. 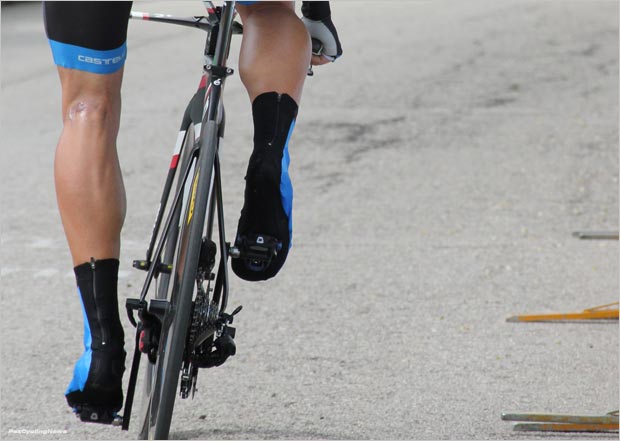 The line was just over the top to stop the clock, and Nathan stopped a few meters past. I let him catch his breath and down a coke then asked him how it was. He was totally chilled – “It was fun!” With no pressure on his gc time, he said he “took it easy”, which was a surprise to me given how many riders he passed (including the 5-minute man Francesco Chicchi). And that tells me this race is a lot harder than many of us really know. 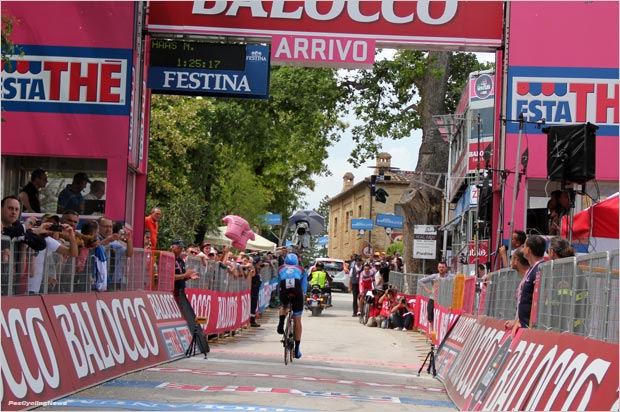 The GC battle is on the tele now as I wrIte this from the bar back in Fano. This will also be my last report from Italia as Ale takes over our roadside coverage tomorrow – and I head back home next week. 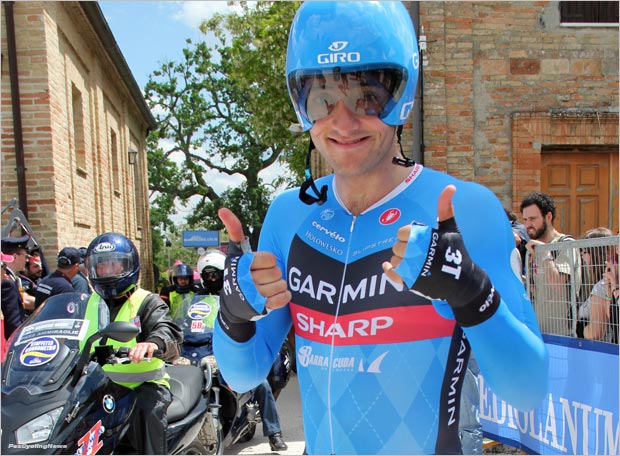 My week around the south of Italy has been maybe my best ever at The Giro – and I’ve got a few good stories still to write.

Thanks for reading – and keep it dialed to PEZ as there’s still so much more to come form this Giro.
– Pez