Giro di Pez: In the Blizzard!

Roadside St.20: It’s a full blooded blizzard, there’s no other way to describe it; big snow flakes fly down diagonally across the raw rock and snow drifts. Visibility is down to 30 metres – it’s hard to imagine how it could get any worse. But there’s a man on a bike who seems oblivious to this foulest of foul days. 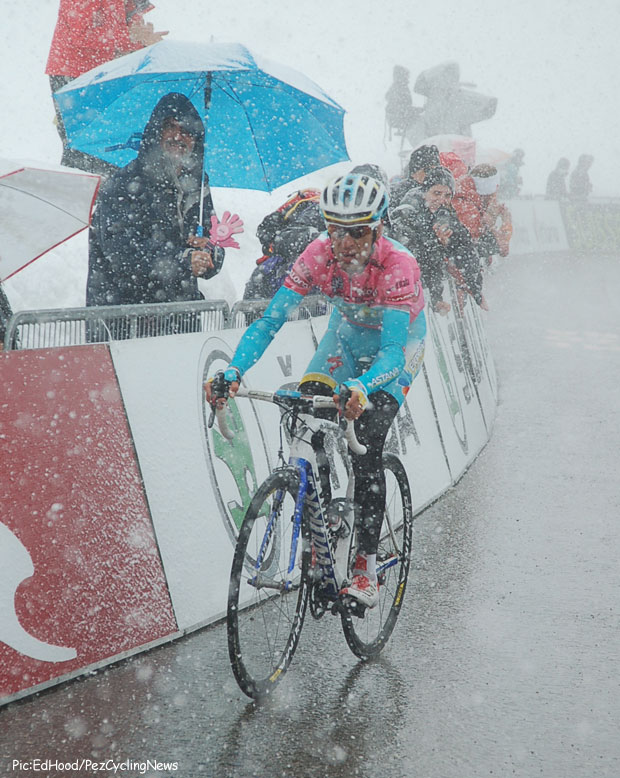 Vincenzo Nibali in his pink jersey (Astana & Italy) is emphatically dispelling any doubt from our minds about his class, panache or grinta as he heads for the top of this savage climb and the stage win at the Tre Cime di Lavaredo. 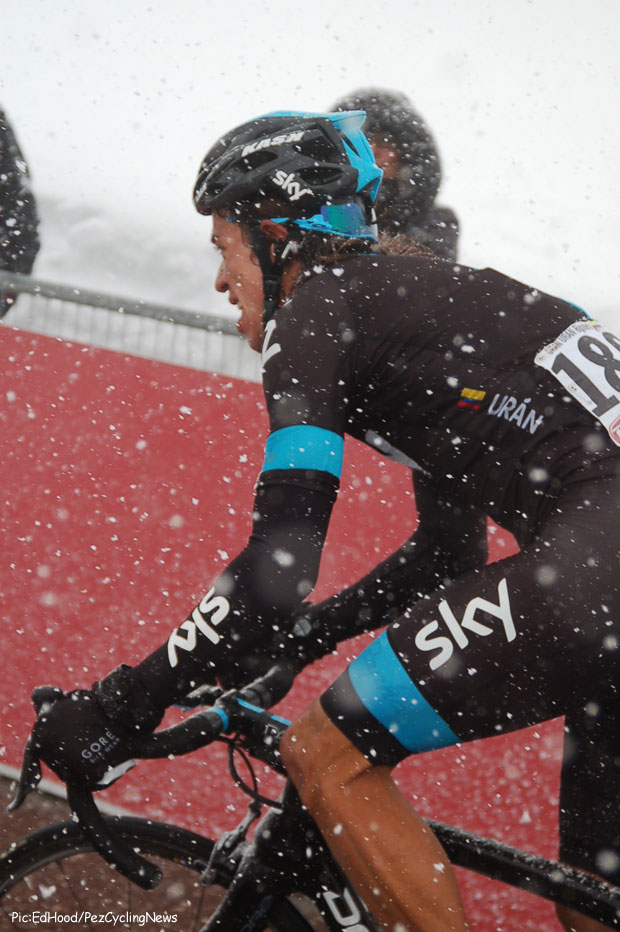 Behind him there’s more drama as third placed this morning Rigoberto Uran (Sky & Colombia) does what we’d all suspected he’d do and attacks the man one place above him on the GC, Cadel Evans (BMC & Australia); the Australian can’t respond as the Colombian takes third on the stage behind Nibali and Uran’s countryman Fabio Duarte of Androni. 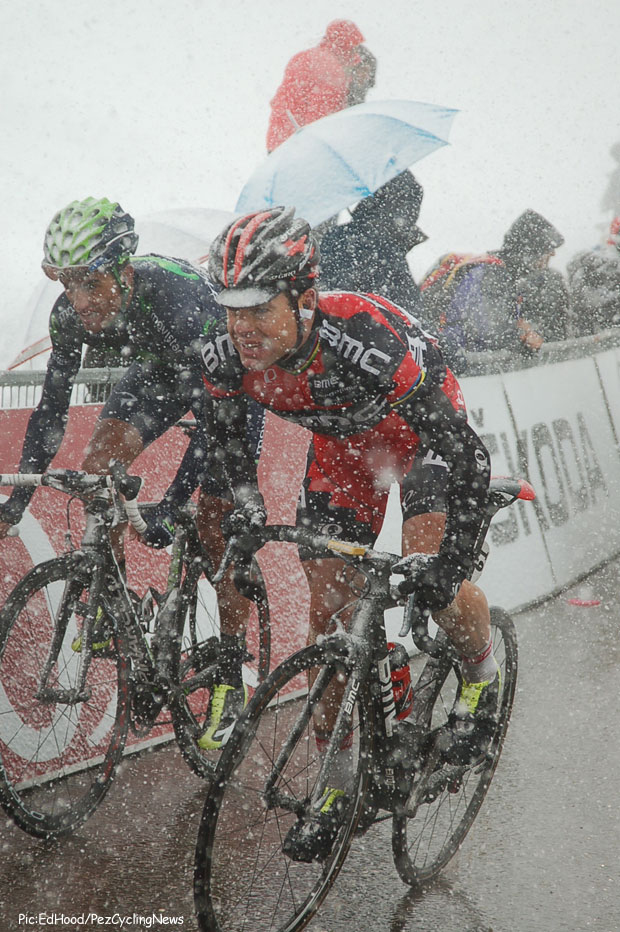 His move means he’s now second on GC, a minute clear of Evans. We’d thought that perhaps fourth placed Michele Scarponi (Lampre & Italy) would attempt the same, but whilst Scarponi is ahead of Evans on the road, he isn’t on a great day and is shepherded to the line by big Polish team mate, Przemyslaw Niemiec.

The field trails in like survivors from some demonic doings in a Heronimous Bosch painting. 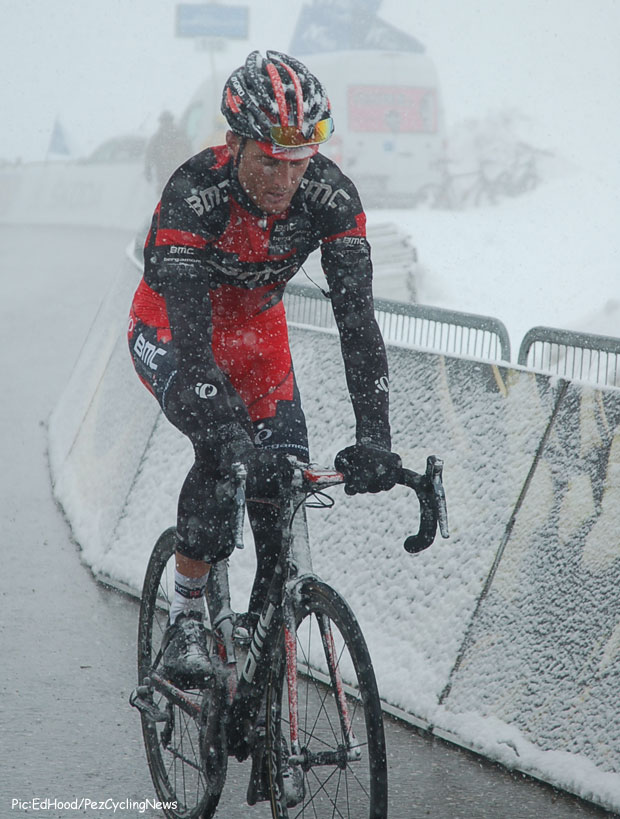 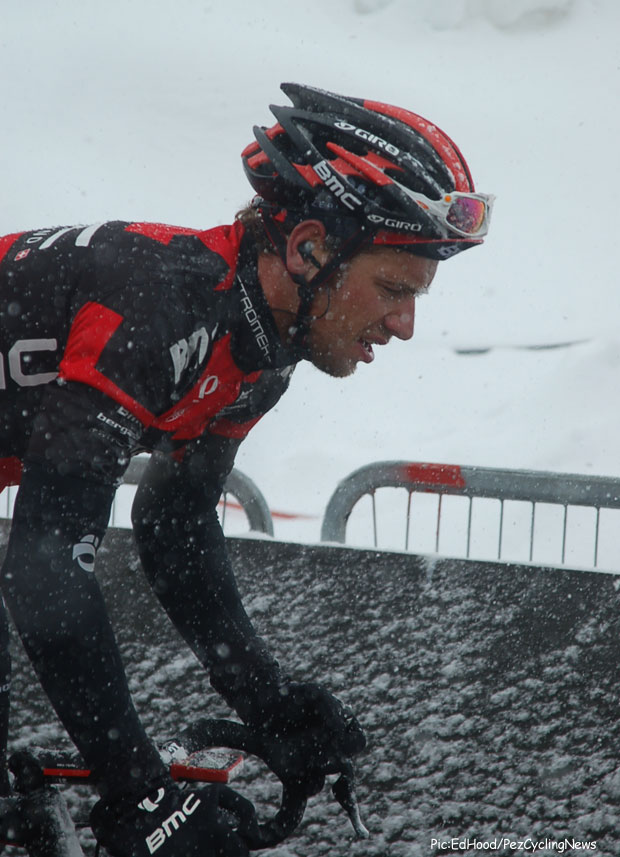 Whilst his compatriot and team mate, Adam Blythe is hurting bad. 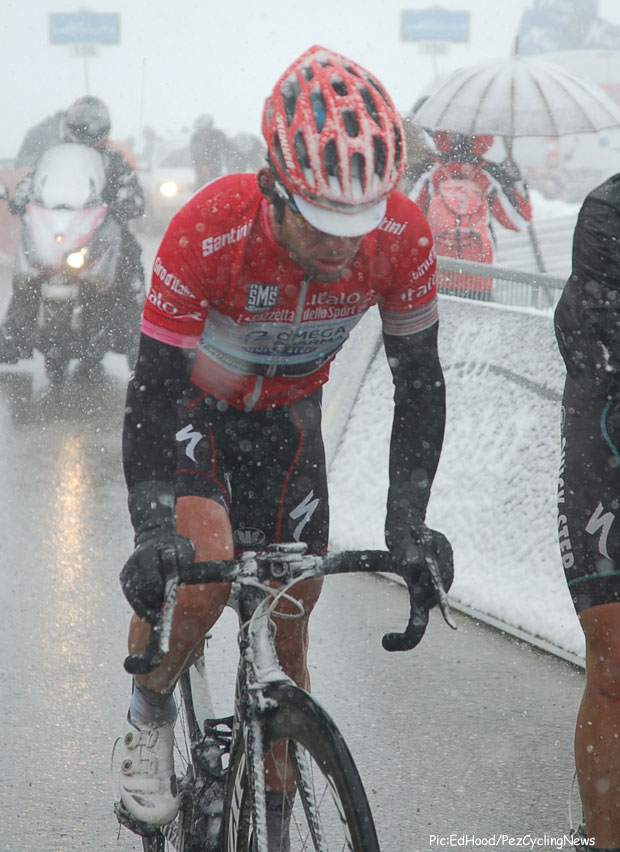 Mark Cavendish (QuickStep & GB) can barely lift his head, he’s so wasted. Despite the fact that we look like snowmen, we think we owe it to the riders to see them all home. 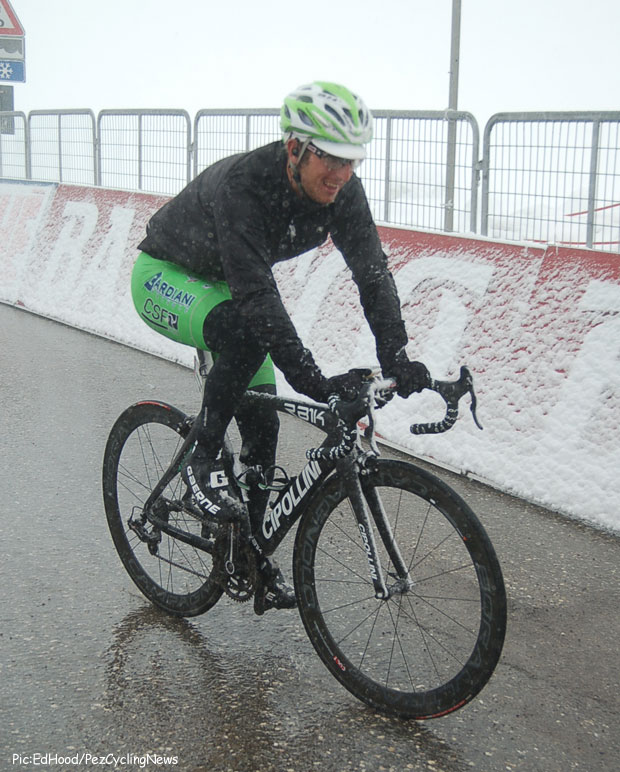 Sacha Modolo (Bardiani & Italy) swerves and sways up the last cruel 50 metres to the line where he can put an end to the pain. 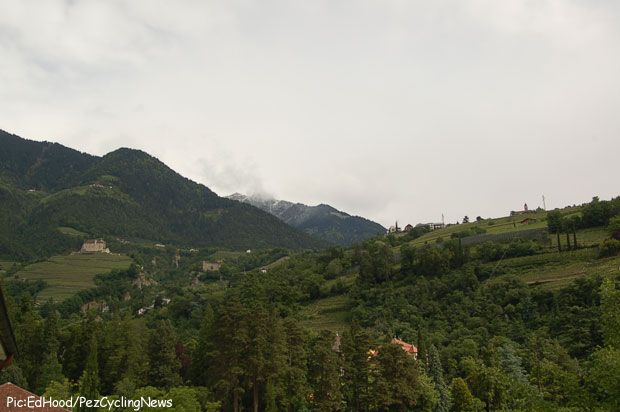 Vineyards, mountains, chateaux, glorious sunshine – good for the soul. And we need our souls cleansed after Danilo’s latest nonsense – “absurd” says the Gazzetta and that’s hard to argue with. 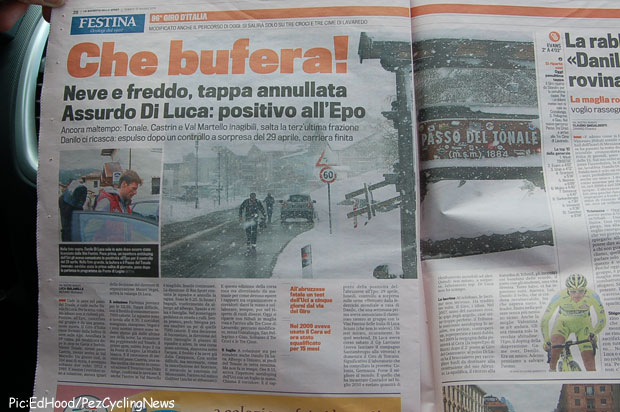 It’s all so sad; instead of the talk being of Nibali’s confirmation it’s of Di Luca’s descent to the sulphurous pits – again. Let’s hope the powers that be make sure he doesn’t pin on a dossard again.

And we have a race to watch, today; albeit the organisers tell us; “the race route has been revamped as a result of continuing adverse weather conditions on the high passes. The Passo Costalunga, the Passo di San Pellegrino and the Passo Giau are all closed due to snow and have been removed from the route. Instead, the route sticks to the lowlands of the Val Venosta, and then rejoins the original route at Cortina d’Ampiezzo, for the Passo Tre Croci and the terrible, gruelling ascent of the Tre Cime di Lavaredo.”

The big fear for the organisers isn’t just the snow, it can be cleared from the climbs – it’s melt water running off the mountainside and freezing into deadly black ice on the road surface of the descents. With just the relatively short descent off Tre Croci the organisers think they have a handle on that problem – and if it snows on the Tre Cime they’ll move the finish down the mountain.

The early kilometres are pretty, along valley floors through vineyards under huge cliffs with castellos perched in impossible situations. 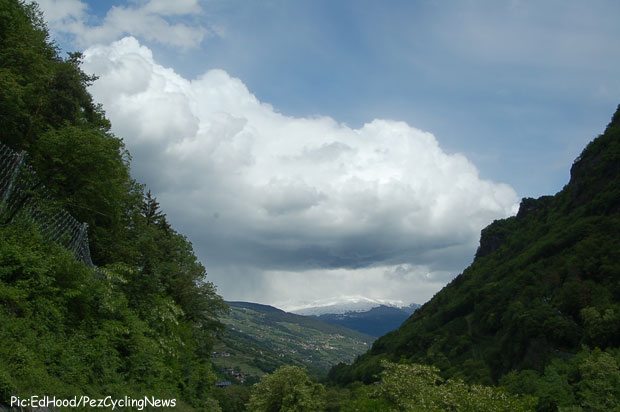 As the drag up into the mountains begins, the snow line reveals itself – and so do heavy looking clouds. The forecast is for snow on the Tre Cime – that looks likely.

Up, up we drag past vineyards with the sky looking less and less benign as big spots of rain splash on the windscreen as the wind blasts the trees – it’s going to be a hard day out there. Half distance, cappuccino and vanilla bun time. 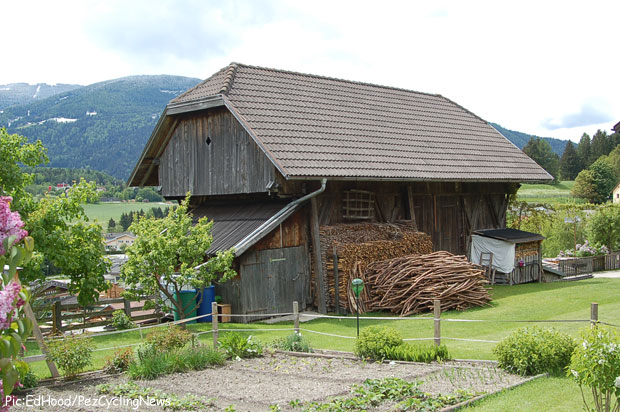 In the high valleys now, well manicured ski hotels, dinky villages with the views becoming ever more impressive. We’ve got sunshine again as we pass the sign telling us we’re 1,000 metres altitude. There are fewer and fewer wee down hills now, the trend is ever upwards. 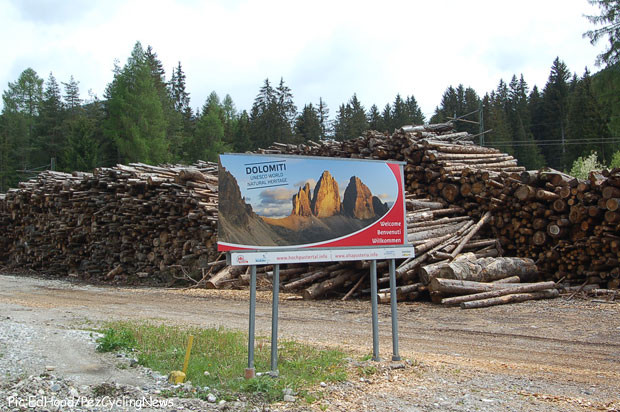 The huge piles of lumber remind you that it’s not just tourism that provides jobs up here. 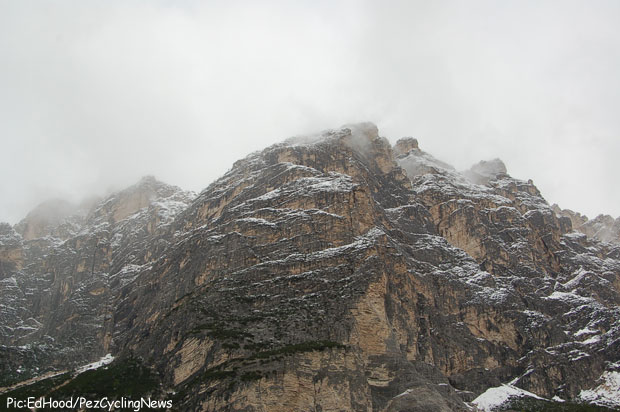 50 K says the sign and the scenery becomes ever more awe inspiring. The next sign says 1,500 metre altitude – that’s the snow line and sure enough, there’s snow by the roadside, now.

At 35 K the drop to Cortina starts, not technical, dry and ideal to claw back time on. Cortina is surprisingly quiet – and cold – as the climbing begins straight away with a horrible long straight ramp. 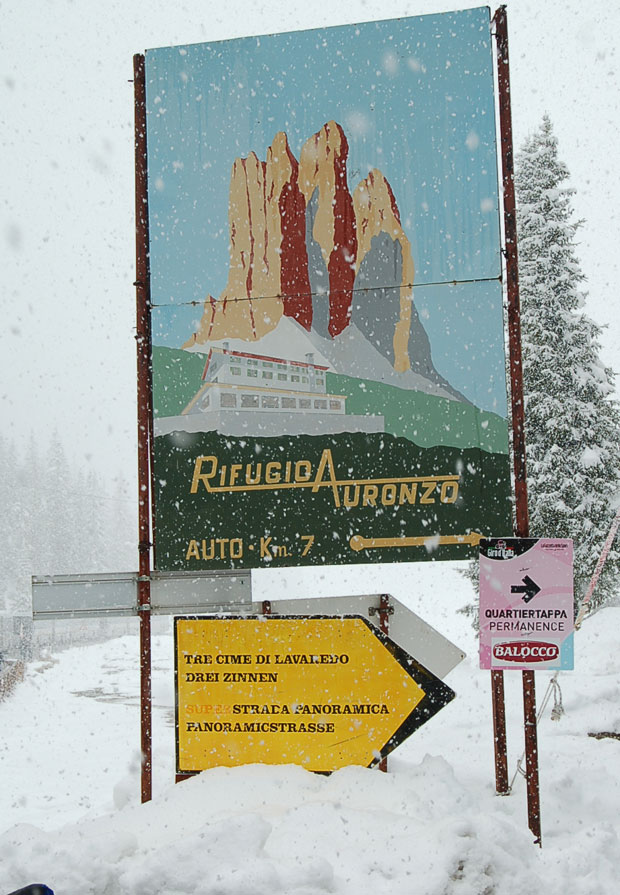 This is the Passeo Tre Croci, the ‘appetiser’ for the Tre Cime – and it’s snowing hard as we grind up. The road drops straight off the top; it’s wet, slick, dangerous . . . 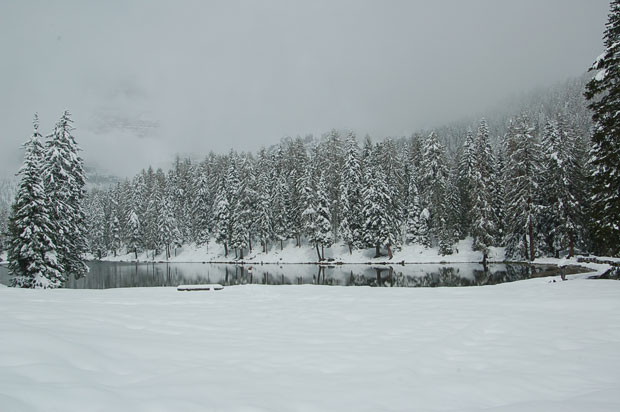 It pitches up again to Misurina from the beautiful lake, there’s a little dip and then the serious stuff begins up the Tre Cime. It’s savage, steep, hair pinning through pine trees heavy with snow.

And then the sun comes out, the tarmac steams and the road drops before it heads skywards, again, ramping, hair pins, brutally tough. I’ve seen most of the big climbs but this is one of the worst. One K to go, we can’t stop to take pictures – it’s to narrow and steep.

This is one serious climb !

We have to park beyond the line, among the drifts and say ‘ciao’ to our three new amigos, who we took pity on and gave a lift up the hill. We wander down through the start, 150 to go and it might turn out nice, the sun seems to be trying to battle through . .

The snow begins to fall, small flakes then bigger ones then Amundsen of the Antarctic ones. The temperature drops too.

We can hear the PA; Capecchi is away for Movistar, last survivor of the break. But we don’t need the PA to tell us that the Maglia Rosa has gone on the offensive – the cheers and board banging from the frozen fans does that.

Nibali is like a ghost in the mist at first, but very soon he’s on us – a man with a mission! No one looks as fast, smooth or as focused as he does, no one.

He’s the Capo of this Giro and after today even the biggest doubters can’t argue about it.