Roadside St.18: The final three days of climbing and the last chances for GC riders started today with the uphill test in Mori. Pez’s Ed Hood was on the ground, on the corsa, and in the bar.

The race announcer isn’t messing around; “On your feet for the number one – Vincenzo Nibali, respect!”

Van Halen pumps, the announcer counts it down, but just like in those mid-week time trials back home, Vincenzo isn’t happy with how he’s being held up and gestures to the official; ‘a little this way!’ 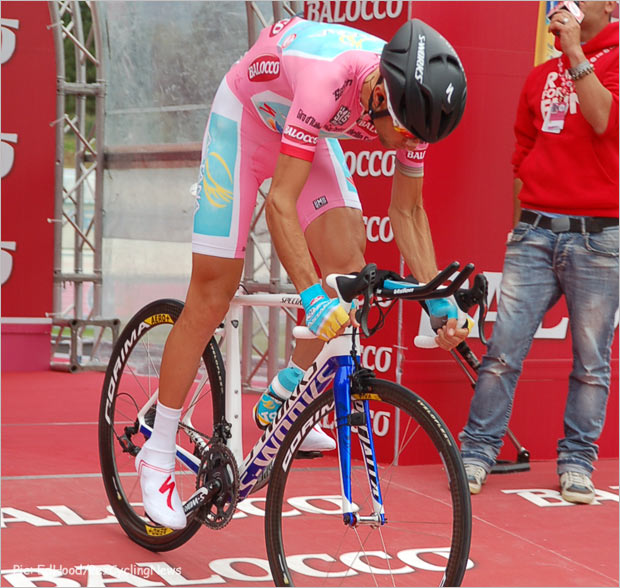 The time keepers five fingers go to four, three, two, one – and we all roar approval as the man in pink bumps down the ramps and heads off for his 40-odd minutes of battle with gravity and the other 171 riders left in the 2013 Giro d’Italia.

Time trials, love them or hate them, if you can’t do a good one, you can’t win a Grand Tour.

So we’ve dealt with the start, what else do you need for a chrono; or in this case, ‘chronoscalata’ – mountain time trial?

Parcours: 20.5 kilometres from the cycle track at the village of Mori at 187 metres above sea level to Polsa at 1205 metres above sea level. There are descents in there and plenty of bends and hairpins. The surface is good, though – and the atmosphere brilliant with thousands of Tifosi skipping work for what really matters in life. 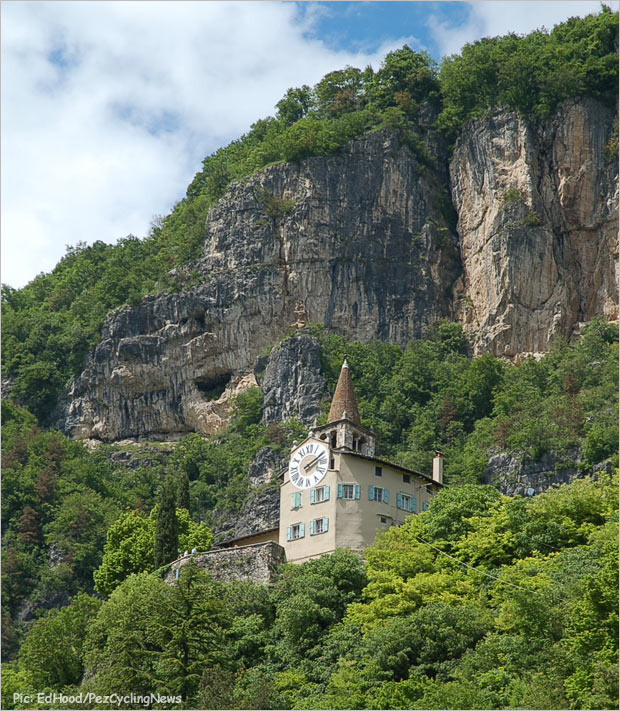 And whilst the riders won’t notice – the countryside is beautiful on the way up.

Preparation: There are mind game going on, early in the afternoon – none of the ‘Bigs’ bikes are on display – time trial bike, road bike or road bike with clip on extensions, that’s the thing? 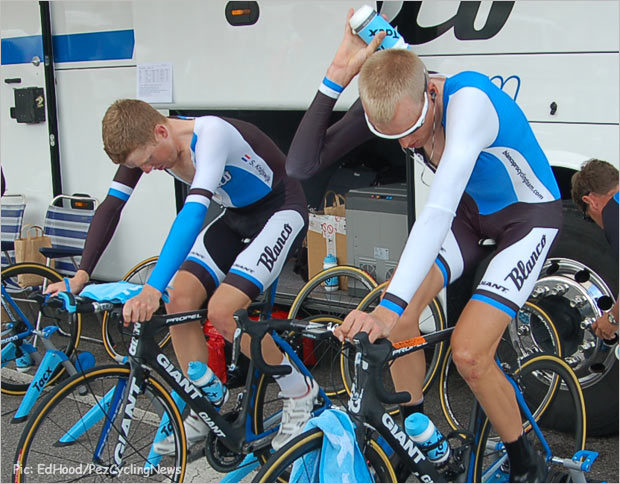 And do you warm up on the turbo like Robert Gesink, dousing yourself with cold water to keep the core temperature down – OR . . . 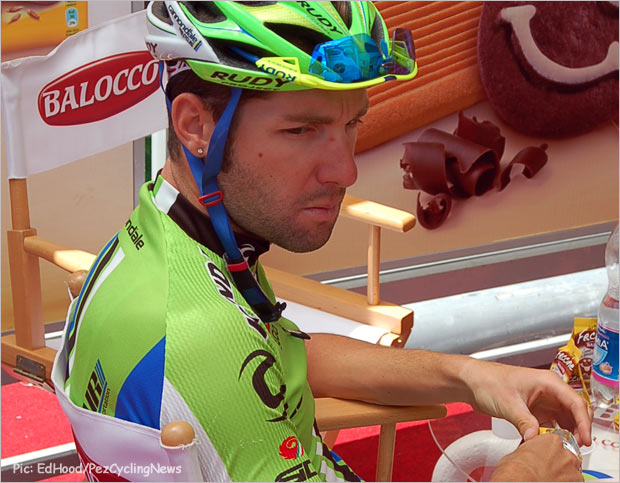 You could be like the trendy young Cannondale Italian domestiques and await your time at the ramp drinking coffee with the pretty girls in the village.

Then there’s the hardware, if you’re a ‘Big’ you can have one of your team mates test ride the course for you on the TT bike. 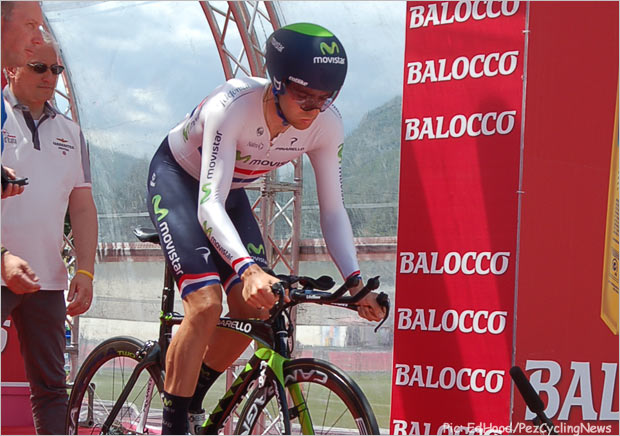 Like Movistar stage winner and top ten rider Elorriaga Intxausti had the winner of the Giro’s long time trial, Englishman Alex Dowsett do. But in the event, all of the top three on GC rode on road bikes with clip on bars. Ace Garmin spanner man Alan Buttler reckons you need 75% of the percorso to be able to ridden in the crouch before tri-bars are worthwhile; their man for the day, Tom Danielson went on clip-ons.

But in any race you need rules – and that’s where the good old UCi come in. Does your bike fit the dimension jig, is your saddle level, it’s not too light, is it? 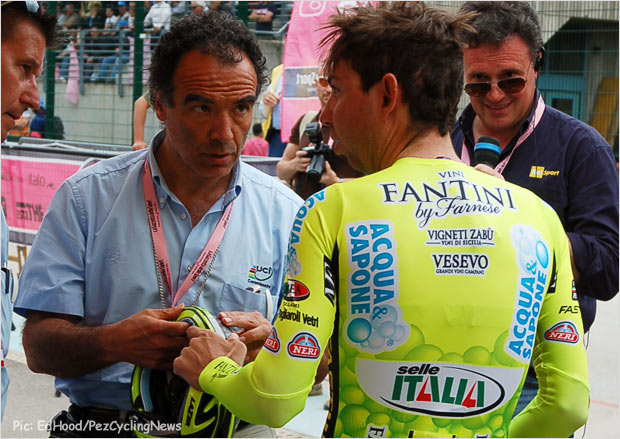 And just in case that’s not enough, we might just hassle you about your crash hat, too – like we did with Mauro Santambrogio (Vini Fantini & Italy). 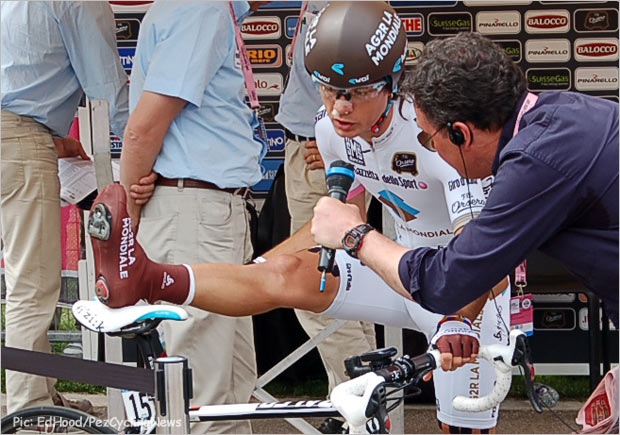 And if you want to really perform, you have to get in the zone; but this is the Giro and no opportunity to stick a microphone in your face is ever missed – even when you’re trying to get your mind right and have a pre-race stretch – ask
Carlos Betancur (AG2R & Columbia) 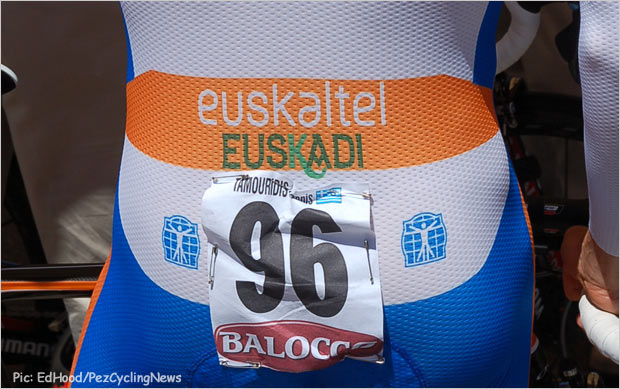 It’s always good to have champions jerseys in your chrono – the more exotic the better; like Ioannis Tamourdis of Greece in his special light weight Euskaltel speed suit.

And you have to have cool guys too, who the crowd can ‘ooohhhh!’ at – it could only be Vincenzo, he was positively Arctic and won that classification by a kilometre. 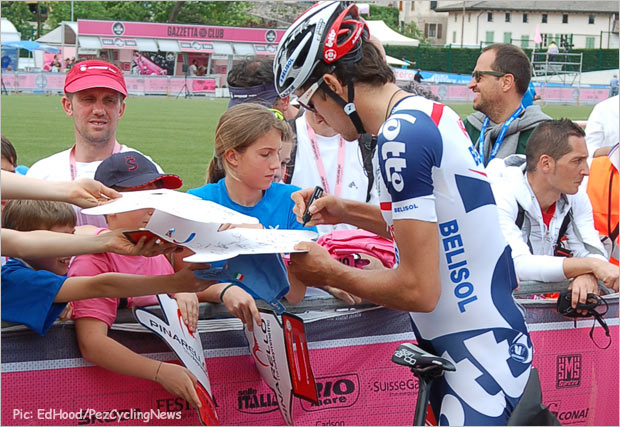 Perhaps it should go on attitude too, big Belgian Lotto rider Francis De Greef still had time to sign autographs despite heading for the start ramp. But there comes a time when you have to drop off that ramp and ride – so you’ll need a following car. 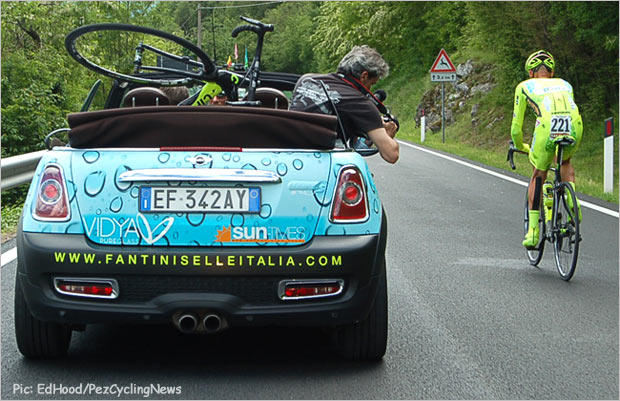 How about a Mini convertible driven by former World Champion, Mario Cipollini – with the spare bike tossed nonchalantly in the back seat? That was the vehicle behind former Giro winner but still cool and popular Italian, Stefano Garzelli of Vini Fantini – but it was a toss-up who was getting the cheers, Mario or Stefano.

And if you’re going well then you’ll catch other riders, in Stefano’s case, Matteo Trentin (QuickStep & Italy). Once caught, Matteo proved a tad hard to drop so the two ended up riding a two-up time trial.

Once Matteo eventually lost interest and was dropped, he had a chat with Mario in the Mini before he dropped back to his fate – they do things differently at the Giro, especially if old Super Mario is in the house. 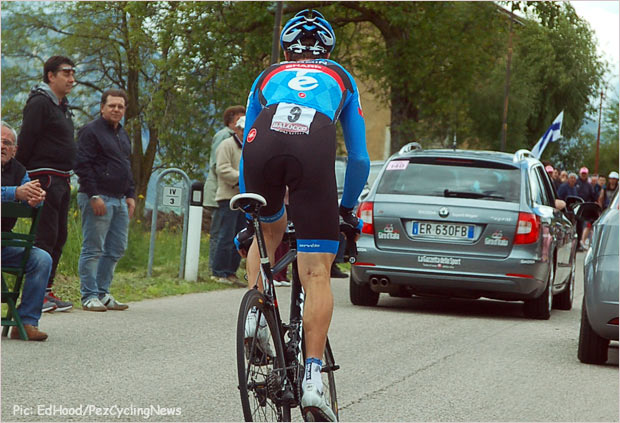 But if the guy behind is on a ride, then you may well be caught, like our man Stefano was by Garmin’s Christian Vandevelde (USA); he stomped by without a backward glance in the second part of the percorso. 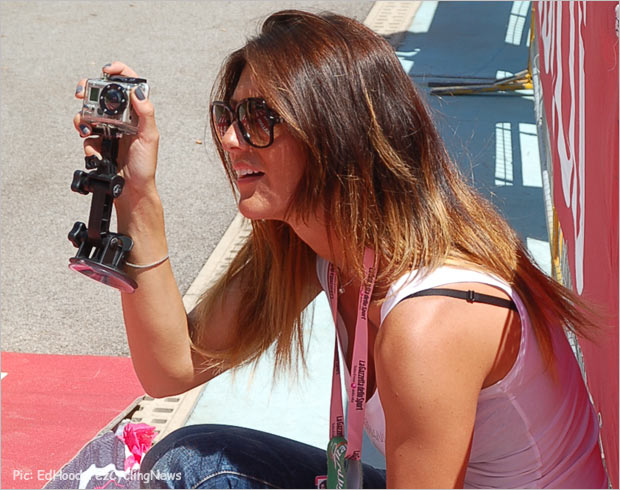 And of course you need fans and entourages – especially if they’re pretty girls.

But most of all, you need ‘Bigs’ – the names the public flock to see. The top three on GC didn’t change but gaps opened – and were closed. 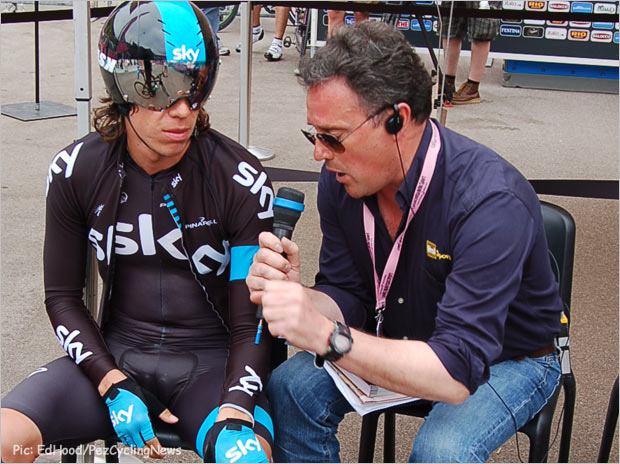 Rigoberto Uran (Sky & Columbia) looked relaxed before the start and was happy to chat and smile, he didn’t seem to be trying to get in ‘the zone.’ He’d defend his third overall well and moved to within 10 seconds of Evans on GC. 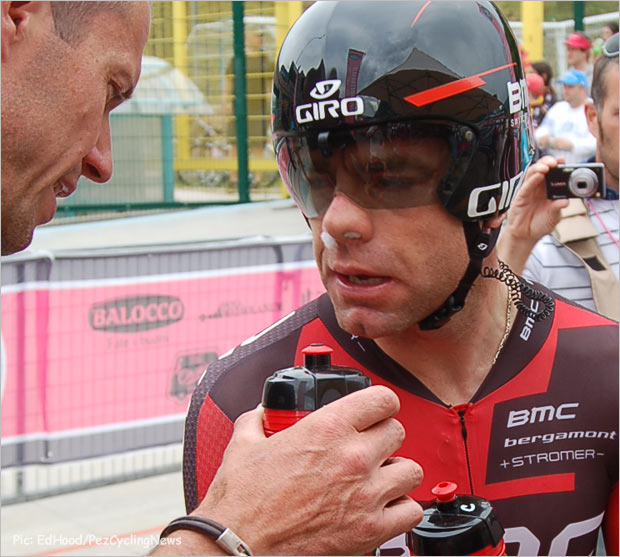 Cadel Evans (BMC & Australia) looked nervous as he rolled in to get his bike checked. He’s lost time in Grand Tours in chronos before; remember when he was supposed to clobber Sastre in the final time trial of the 2008 Tour and win the overall – but didn’t? It was another disastrous TT for Evans, finishing 25th and dropping the best part of three minutes on the winner as well as 1:10 on Uran.

Vincenzo Nibali (Astana & Italy) was majestic, deposing ‘hot seat’ incumbent Samuel Sanchez (Euskaltel & Spain) by the best part of a minute to leave the man from Oviedo distraught as his stage win dream was blasted by the Sicilian. 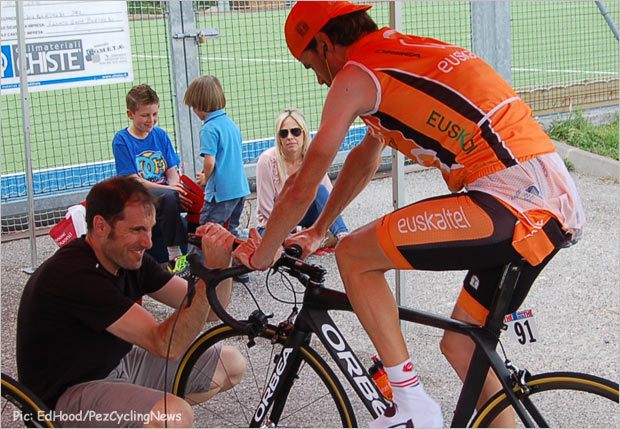 Maybe it was ‘one of those days’ for Samu, earlier we’d spotted Euskaltel head spanner man Samuel wrestling with the Orbea’s clip-ons during Sanchez’s warm up. 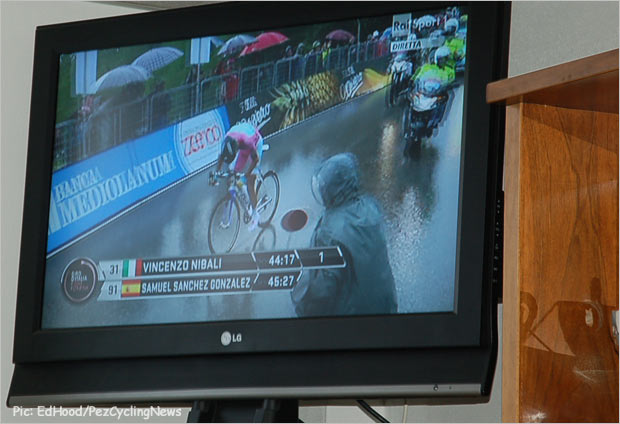 But most of all, you need a good bar with a big TV and cool beer – well, we do!

The snow is falling in the Dolomites, keep your fingers crossed for us!