ROADSIDE St.1: “The ONLY story is to have that big Canuck unload a heap of whoop ass on the Paul Weller clone and the shark! Disappointed he shaved the beard….it looked good with the aviator glasses, very euro chic / lumberjack hardman. Proper cycling role model.”

So said my pal Brent via email after the 2013 Giro’s opening ceremonies had completed. An astute and correct assessment – my being Canadian notwithstanding. And while some other big names of cycling aren’t starting this Giro, that’s had little to do with race quality over the years, and the rules of engagement are quite different from last year when Ryder was not considered a favorite. 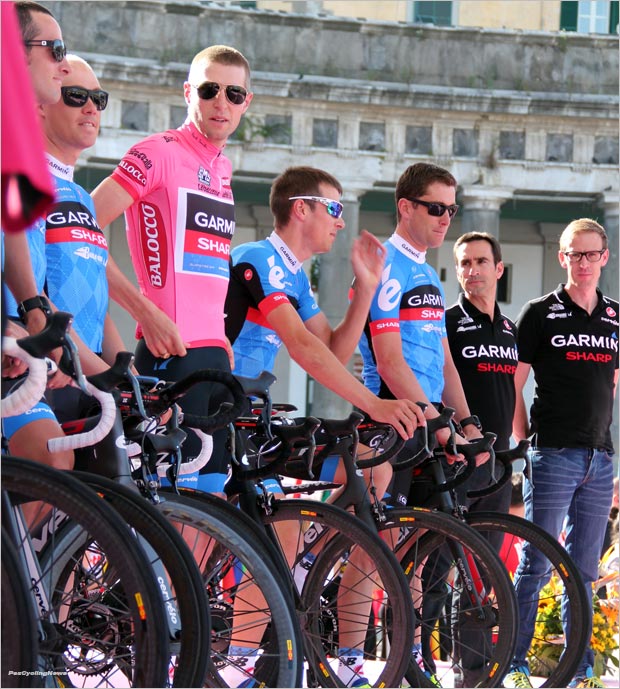 You can bet Wiggo will have one eye and several teammates watching Ryder at all times, and while the newly coifed Brit (sadly no merits could be given for his interview skills on the Giro stage yesterday) has a more impressive palmares than the newly coifed Canuck (whose media skills admittedly still need some work), there’s no question this year’s parcours will suit Ryder as he just gets stronger as the race goes on. 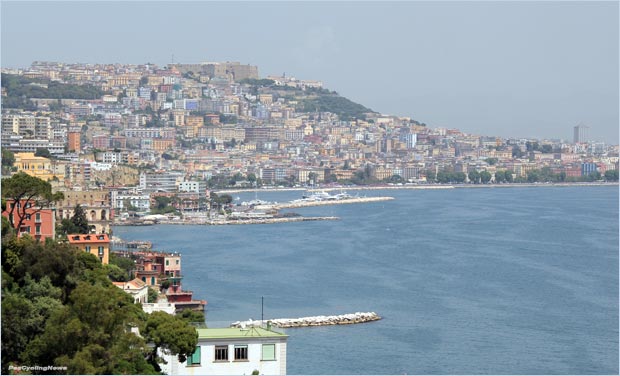 We’re in Napoli. Incredible energy in this town.

Get This Party Started
My journey began Wednesday with the overseas flight to Rome, some power shopping to appease Mrs. Pez (who enviously joined me via text) and my own weakness for shirts from a certain Roman haberdasher, then a drive south to Napoli and into the eye of the storm that is less about il Giro than the sheer craziness that is Napoli.

It’s my first time to the birthplace of pizza, and as any seasoned adventurer will admit – I was looking forward to ‘mixing it up with the locals’. My journey so far had been surprisingly without incedent – no lost luggage, connections, or hotel reservations. My rental car was still reserved, and I even scored a discount on the suggested model upgrade – why the hell not drive a real Italian car for the next two weeks? Alfa Romeo and PEZ – I like it. 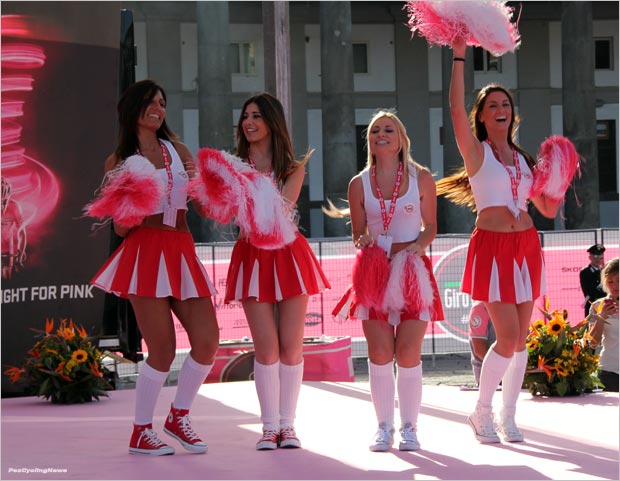 My old school self loaded up with maps for our 12 days journey, and I smugly declined the GPS system with the car, flashing my newly charged up Italian iphone – complete with Google Maps to guide me as needed. Turns out that app is pretty fantastic – I exited Rome in record time – I was on the A1 in 40 minutes. 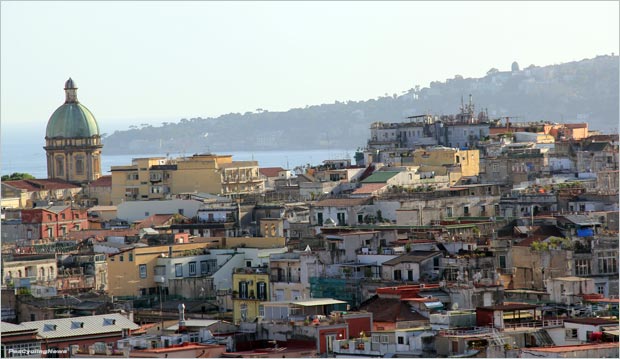 Napoli Ho!
One hundred and sixty was the number kilometers per hour below which I refused to drive as my date with the brick oven baked dough and a city filled with Sofia Loren look-a-likes called me on. Of course no adventure that goes according to plan is ever worth having, and a couple of wrong turns as I hit the city put me off my original track, but on track to see side streets that are the real heart of this buzzing city.

No tour busses where I was – instead it was two to three lanes of traffic squeezing by in all directions – remember the classic Dr. Suess book “Go Dogs, Go”? The number of times I was challenged head on by traffic including cars, scooters, pedestrians of all ages, and honking horns would have been enough to test the patience of any rule abiding driver. But as I’ve seen before in this country, most rules are really just ‘suggested guidelines” – especially when it comes to driving. 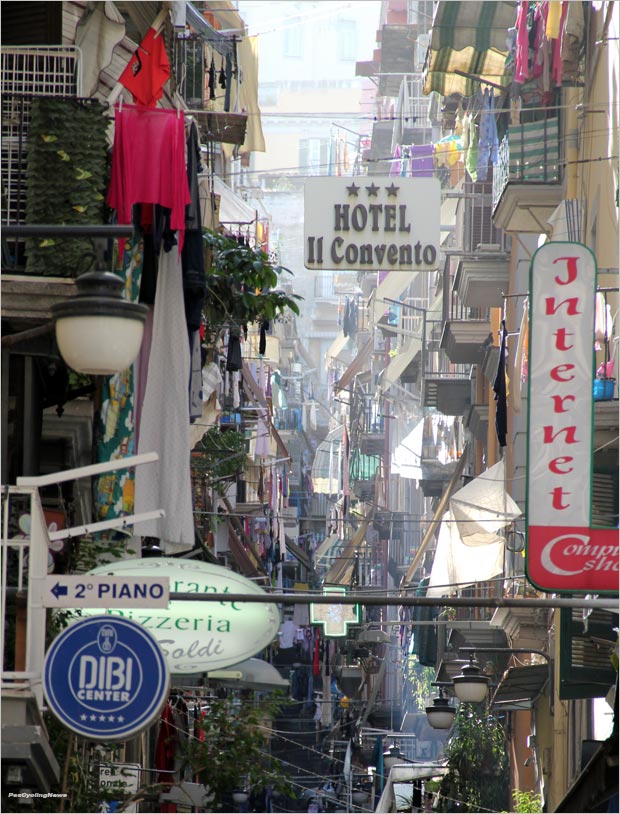 I found myself rolling over cobbled streets pointing up, down and twisting in every direction. I thrilled when I saw the day’s laundry clinging to balconies, windows and wires suspended 2, 3, and 4 stories above the exhaust filled street. The Napolitani must be among the most patient people on earth – how else you could survive here is beyond me.

But the smile on my face was ear to ear. And got even wider when I pulled into the hotel and met my driver and old chum Mino, who’d be joining me for the next week. To help set the stage, I’ll offer this brief into – not just as a point of reference, but also because it’s what I expect will a key factor in the adventures that await us. 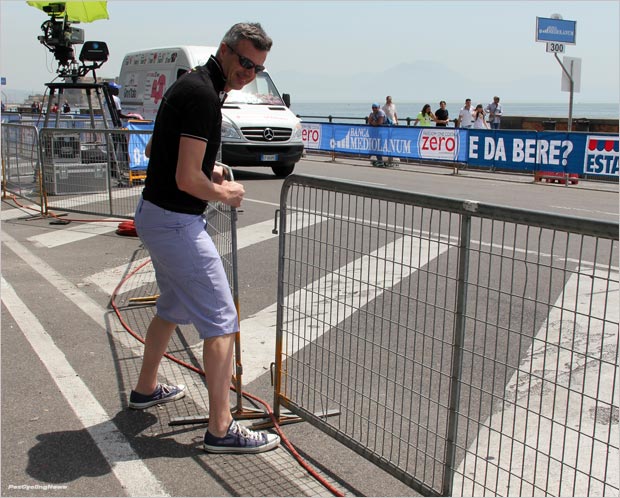 My driver and ‘fixer’ Mino- together we’re an unstoppable force.

Meet The Driver
Or “autista” as the say here. I first met Mino in 2005, at a Giro rest day in Arcore (north of Milan) when we were both staying at the Lampre team’s hotel. My interviews with Damiano Cunego & Gilberto Simoni have long been forgotten (I wasn’t even sure the Little Prince engaged my questions at all, given his interview-long engagement with texting whoever was on the other end of his phone.) But my friendship with Mino (started as two guys who started discussing the Giro while eating at adjacent tables) turned into an annual meeting to share a stage of the race – always with Mino taking the wheel, or playing photog as I rode part of a stage. Mino is tapped into the sport through various avenues, and his combination of his team and sponsor connections, his being Italian, (which has gotten us past many a road block over the years), and general laid back attitude make him an invaluable wingman for the days ahead. 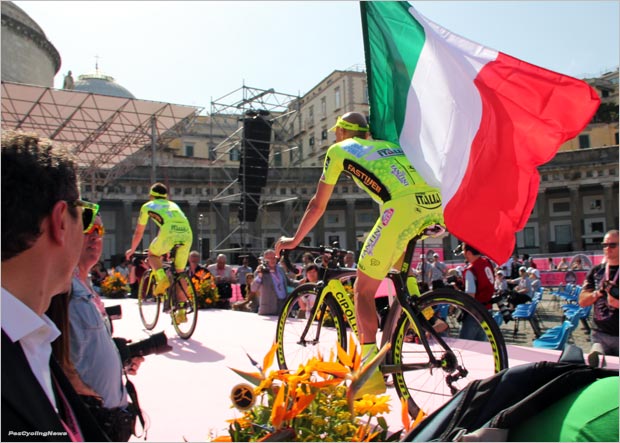 To The Ceremony
It’s hot in Napoli – the red stuff pushes 29C degrees, and it’s humid – that moist Gulf of Naples air has nowhere to go on this breezeless day. At 3:30 it seems much of the city is still at ‘riposo’, taking time to return from the mid-day break. Maybe that explains the thin crowds at the Giro’s Teams presentation. But the dj cranks the tunes and the announcers get it rolling on time – and great to see Anthony McCrossan is back to duty as the first English-speaking announcer on race-day festivities. His knowledge of the sport and love of the microphone make him an ideal stage man to engage the ever more English speaking peloton. 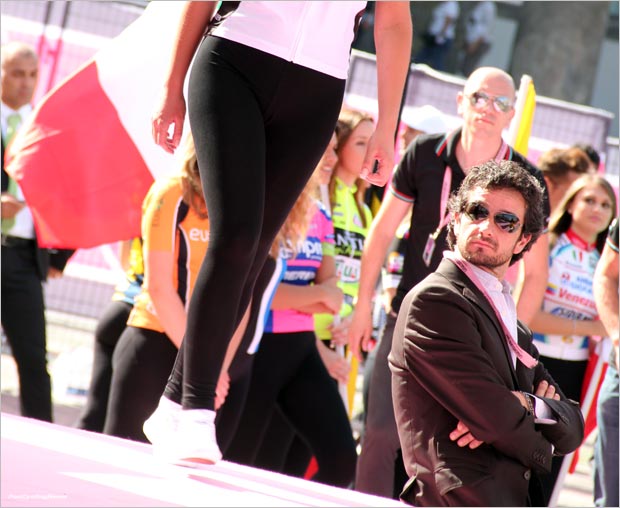 The sponsor tents are in full bloom, and the lack of fans makes an ideal seeing to get to work capturing the lovely hostesses and promotions girls for the pages of Daily Distractions. I gotta say, today was like shootin’ fish in a barrel fellas – dozens of cute Italian girls in one place, buoyed by the anticipation of the next three weeks and without any of the fatigue and boredom that will surely come. I shot around 800 pictures today – most of them of the ladies – so let’s just say Job #1 is complete. 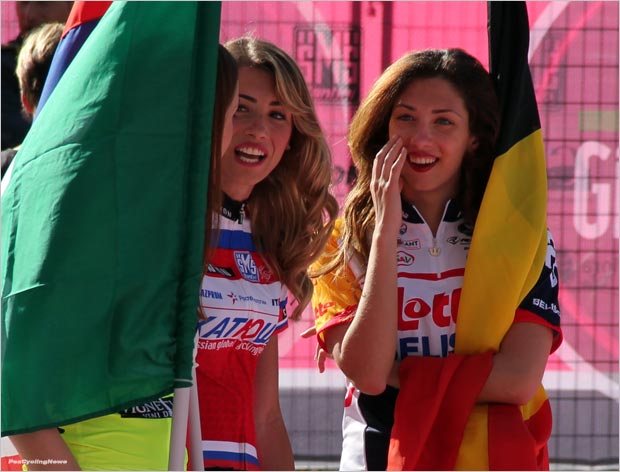 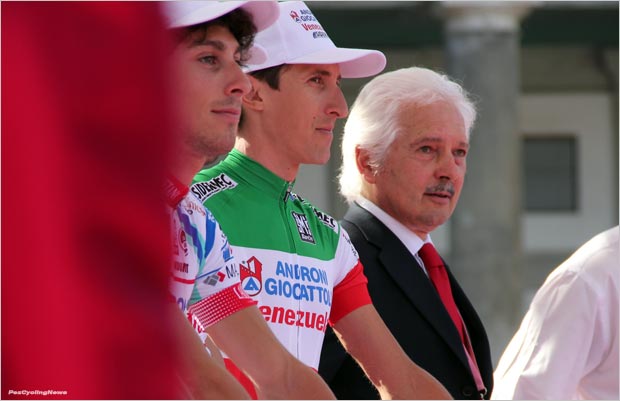 Regardless of his associations with riders of nefarious pasts, Androni DS Gianni Savio is a character of note.

Back To Center Stage
The big reactions to the riders were reserved for the Italians even though Pozzatto, Garzelli, & Scarponi et al are on the cusp of retirement (makes me wonder where the next generation of this countries riders are?), and English-speaking riders like Cavendish (who pulled a natty track-stand/ wheely on the stage), Cadel Evans, Wiggo and Ryder. 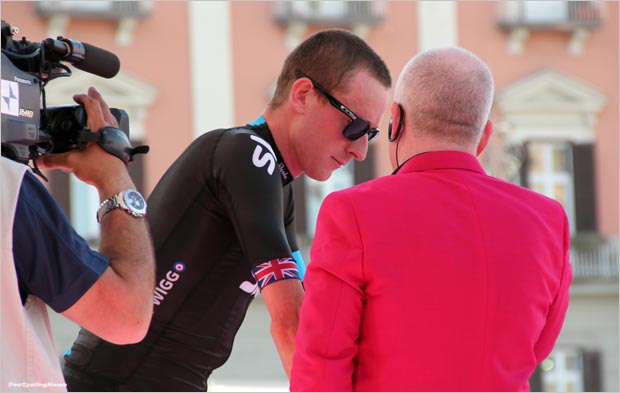 Bradley indeed looked serious with his new haircut (oddly enough the same style Lance used to sport – to make an odd comparison), too bad he couldn’t bring the same interest to his onstage interview with Anthony. Sure he’s heard these questions a million times before, and they do little to challenge anyone with above average intellect – but come on Brad – couldn’t you just play along? His reluctance to join Anthony at center stage, and one word answers were a letdown from cycling’s biggest star. 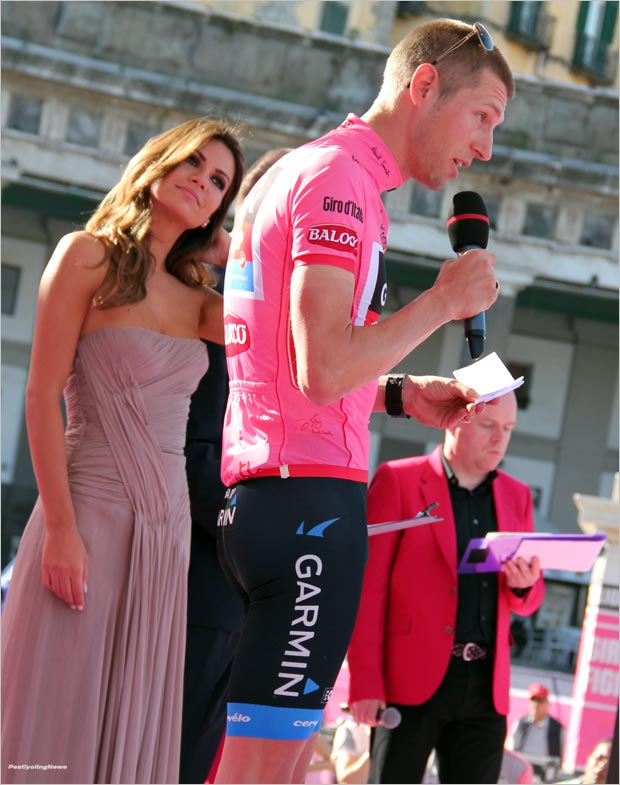 The last rider into the arena was reigning champ Ryder Hesjedal – looking regal& confident in his maglia rosa. Looks like he and Brad went to the parrucchiere, and while Ryder’s genuinely laid back demeanor makes for some low key interviews, it was clear how much he respects the race, the fans and his sponsors. Talking to crowds may not be his thing, but he stood tall and offered what he could. He was joined on stage by the gorgeous Italian actress and the Madrina del Giro – Alessia Ventura to present the Giro trophy, and he performed his duties as past winner with devotion and grace.

So the protagonsists are presented the race starts today at 2:30 PM – as the hotel chef just said to me – “in the heat of the day” – while pinching his thumb and two fingers together for emphasis as only Italian can do.

Let’s get this party started. 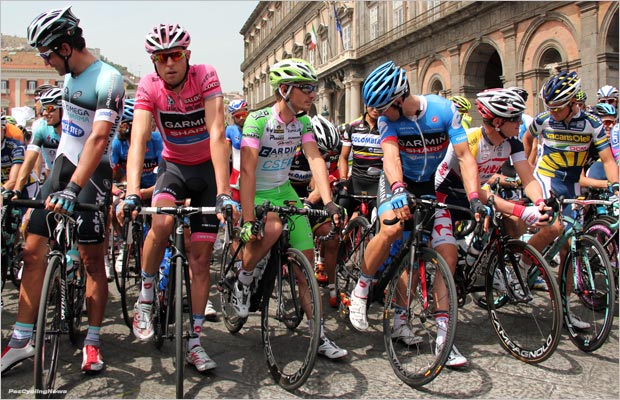 Ryder gave my the nod when I called out: “Go Canada!” at the start.

—– Update: Stage 1 Underway ——–
Stage 1 has just rolled out – with still 90kms of today’s shorter stage to go. We drove the corsa this morning and while it won’t end in anything other than a sprint –it’s a nice circuit along the coast, even if the road surface in many places is not what most of us would ride under normal conditions. My guess is the economic crisis has trickled down to at least the level of affecting the Giro’s tradition of freshly paving the roads for each years stages. 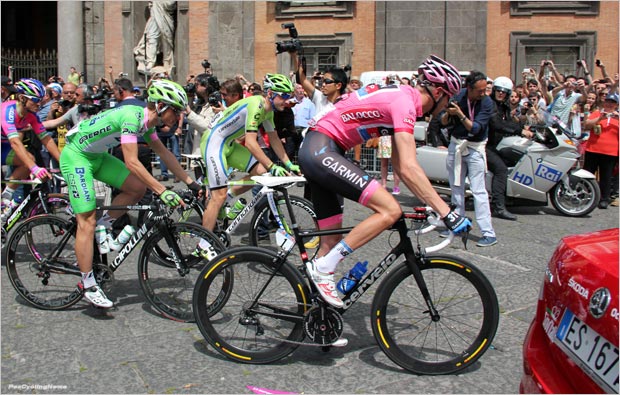 And they are off…

Thanks for joining us we’re just getting started – lots more to come on PEZ.
– Ciao a domani –
Pez

Jan Hirt Solos to the Win in Azerbaijan