ROADSIDE St. 7: What a day! It’s pouring rain as we look for an exit from the race course behind the end of the convoy. Official’s horns are blasting and the guy who collects the race course markers seems irked that we’re in this procession – unless all his horn blasting just means he’s happy to see us.

PEZ-Fans: I know this report is late – it’s after midnight here in Italia and the stage finished hours ago. But tonite was something of an exception – a combo reunion / introduction of some PEZ-Crew old and new here at the 2013 Giro. 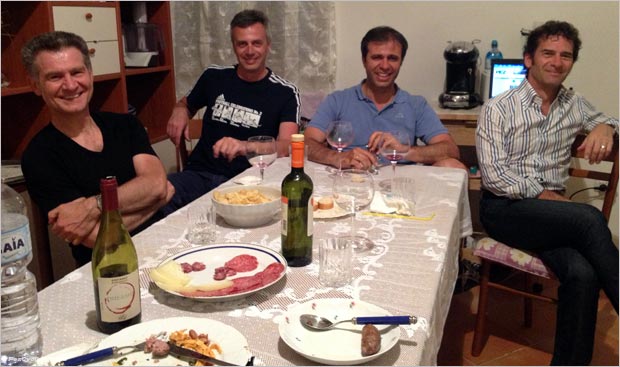 We made the 220km drive from the stage north to Fano – where astute readers will recall is the home of long-time correspondent Alessandro Federico – who’d prepared a special post-stage dinner for our Milano-based photog Angelo, my driver Mino, and me. I’ll tell you the pasta & fagioli, pasta ragu, salsiccia, and verdure were excellent – and easily warranted my staying up past my bedtime to get this story posted. (I hope you’ll think the read is worth the wait too.) 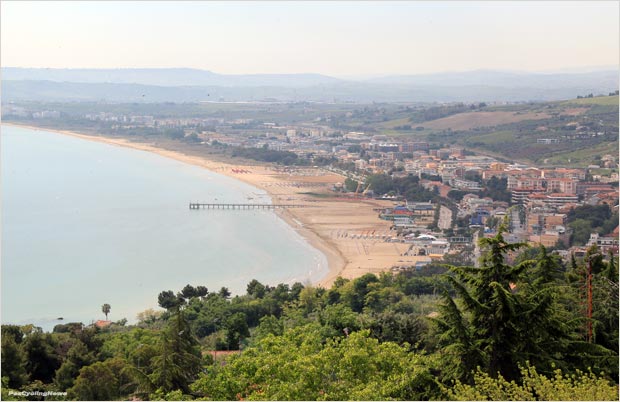 The day started bright and sunny in Marina di San Salvo (that’s it down below) for the first really tough stage of the Giro – 177km into, around, up & down the coastal hills back to the seaside town of Pescara. The ‘Garibaldi’ race guide listed 2600m of vertical gain on a day that had only two flat sections that I saw on our recon drive ahead of the action. 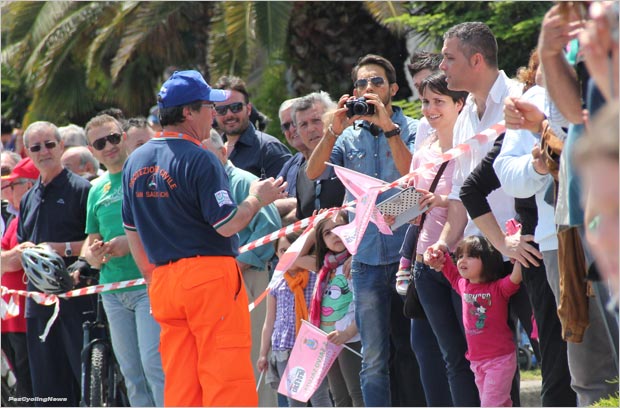 Along the way I snapped photos of everything that caught me eye and looked interesting – and that was a lot. Like people talking much too loud, people talking in a crowd… 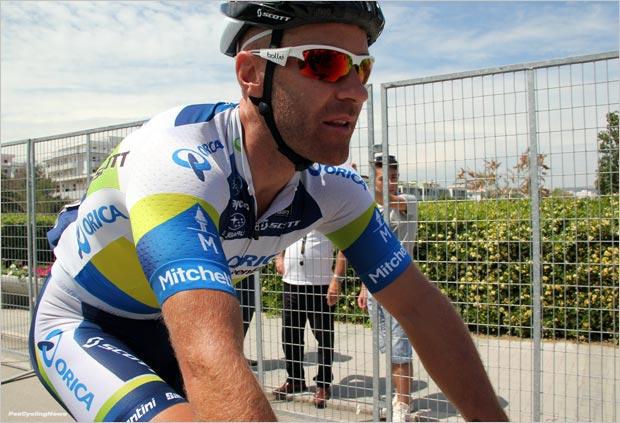 And like any day on the Giro – this was about so much more than just seeing the bunch speed by. Down at the stage start I caught up with Orica-GreenEdge rider and former Canadian TT champ Svein Tuft. I mentioned a few days earlier that I liked his chances in tomorrow’s long TT, and my expressions of interest to follow Svein in the team car tomorrow have been well received – so stay tuned for the Sveiner laying down some watts. 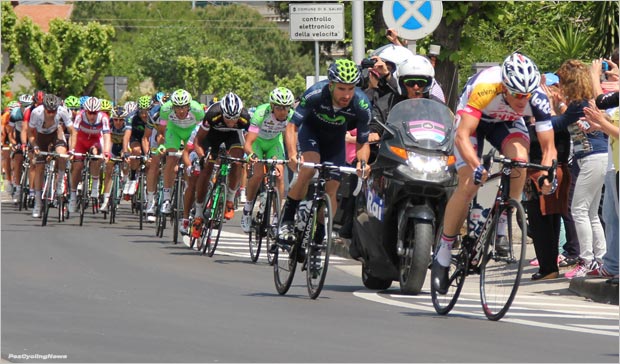 Outta the gate Lotto’s surprise stage winner Adam Hansen threw down his cards even before the red flag dropped, for a very tough day on the bike. We drove most of the stage, finally pulling up on the penultimate climb of the Santa Maria de Criptis – with its brutal grades of 18%. 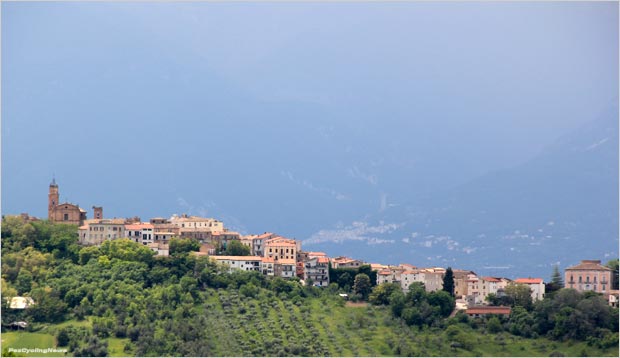 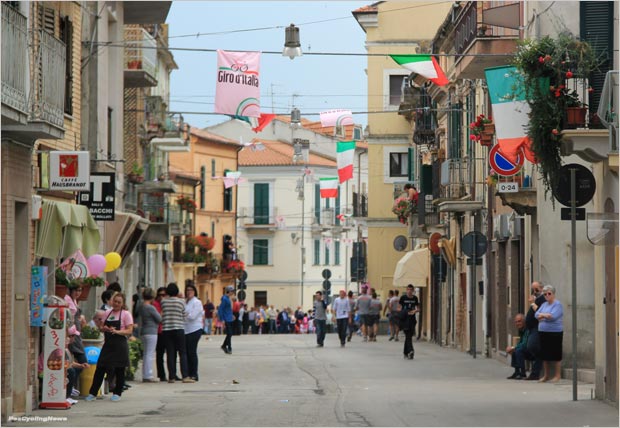 While some of the towns seemed sleepy waiting for the race to arrive, there was no shortage of decoration to mark the day. 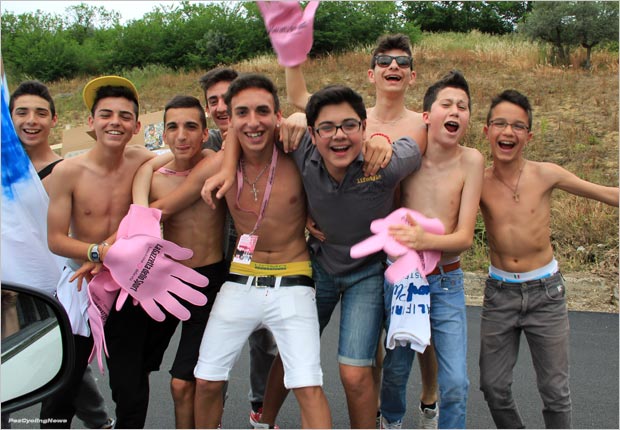 And as we drove further in, the fans came out of the woodwork. I had no idea what these young turks were on about, but they loved the fact that we looked official. At least I think they did. 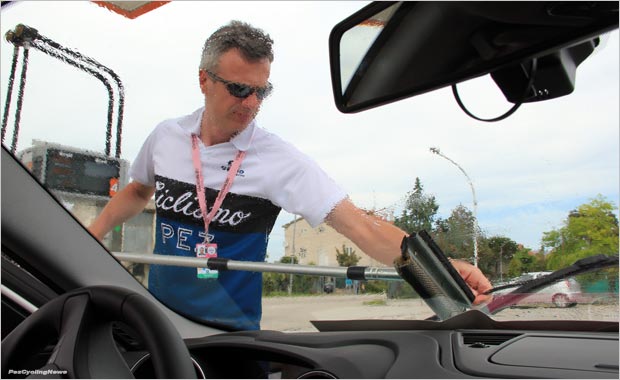 Interesting Fact About Mino #123: He falls asleep in 2 seconds.
Seriously – I’ve been sharing a room with this guy since Naples, and am utterly amazed at how fast he falls asleep. His head hits that pillow, he signs off with a nightly “notte”, and boom – 2 seconds later he’s sawing logs. I am not making thus up. Maybe it’s because he’s the hardest working autista I’ve seen, maybe it’s because he doesn’t eat lunch, but whatever the reason, I’m envious. 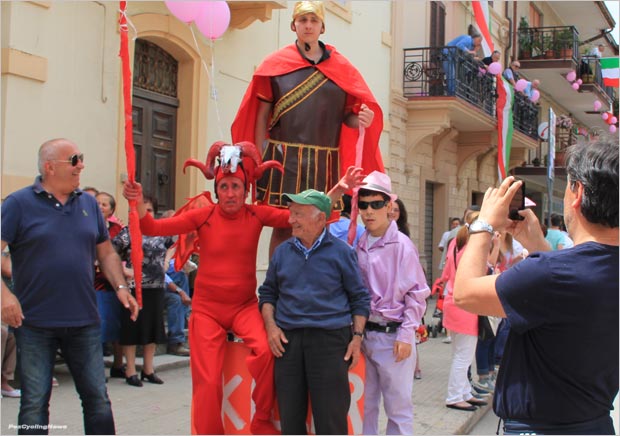 Another town and more fans – I had no idea what these guys were on about either, but thought it’d make a good photo. 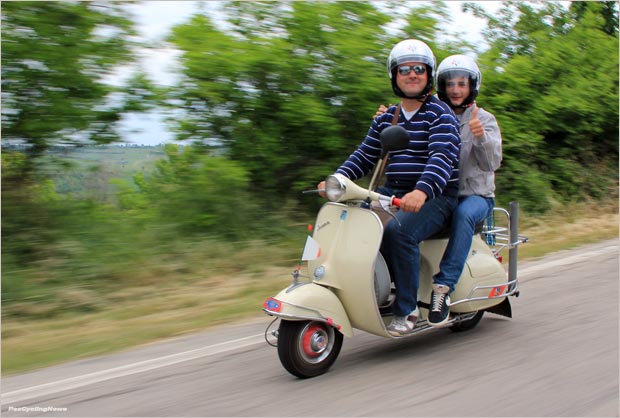 And on the closed course – open only to the lucky few with the prized Giro media credentials, I spied these two guys zipping along on the coolest ride I’ve seen so far – the only thing missing was Sofia Loren. Then again maybe they were enroute to pick her up… But they summed up perfectly what was another awesome day on the race – the wind in your face and a thumbs up. Who needs a media pass when you gotta Vespa?

Thanks for reading and see you tomorrow for bug day at the Time Trial.