Roadside St.14: In the 10th year of the anniversary of Marco Pantani’s death, the Giro d’Italia pays tribute to the swashbuckling climber again with a stage finish at the ancient Sanctuary of Oropa. PEZ was roadside to witness the battles that would have made Il Pirata proud.

There are places that remain impressed by stories, actions, events. Their name remains linked to a specific fact, or story, or person. This is the case of Oropa, and of Marco Pantani. On this climb, in the 1999, Pantani impressed all the world winning the stage after a mechanical incident occurred at the beginning of the final climb. At the moment of the mechanical accident the speed was high and Pantani lost about a minute to adjust the chain of his bike and put back the front wheel. The contenders tried to play their cards but Pantani was so strong he passed about 50 riders one by one, till the last one – Jalabert – at less than 2 kilometers to the finish. 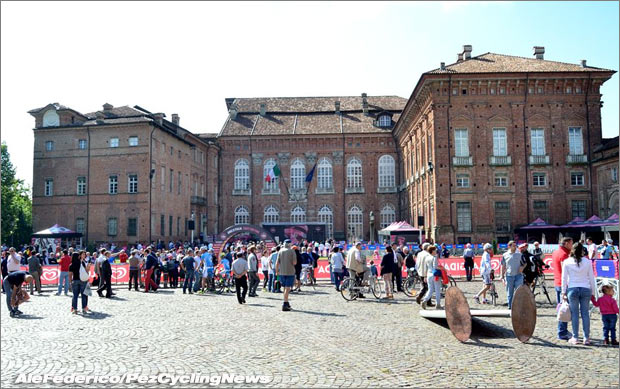 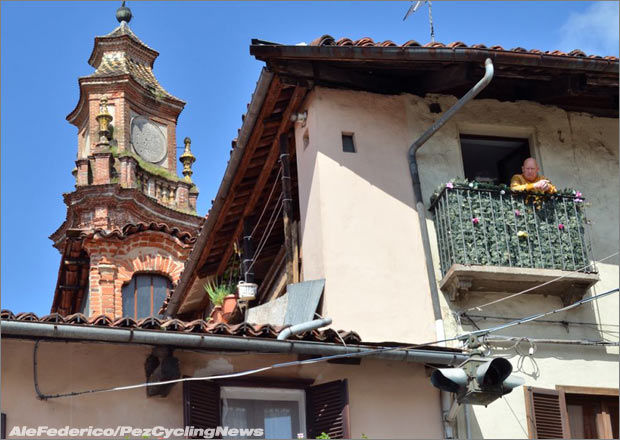 Today the Giro again climbed Oropa road and again we had a very good stage with thrilling changes in general classification. This seem to be a Giro where the final word will be said just at the end, possibly on the Monte Zoncolan. We thought we found a strong leader in Uran but today he lost too many seconds in a climb which was hard, but not too long. The rivals smelled the blood and one by one dropped the maglia rosa without mercy. In the end the Colombian didn’t lose the rosa jersey, or didn’t lose too much time but tomorrow the road will climb again and the leader will be a bit weaker than this morning. 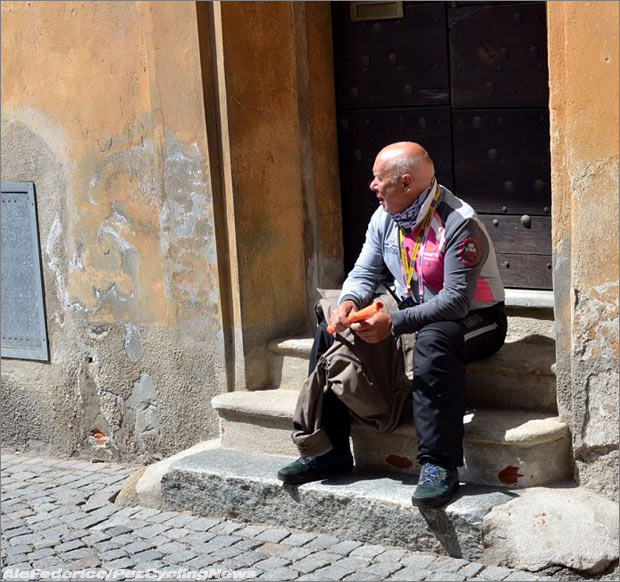 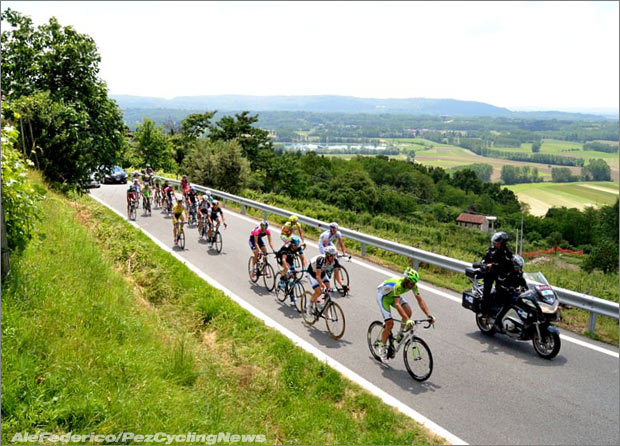 The break on La Serra climb, the first of the day.

Yes, this morning. It seems a lifeime ago but just few hours ago I was in Agliè, a micro village built around a fantastic old villa in the north of Piemonte region. This is the third and last stage in Piemonte and finally the Giro tomorrow will move east to Lombardia. The morning in Agliè was really fine, with good sun and nice temperature. But basically I hate the departures where you can’t watch any action and I decided to move forward to the first climb of the day of la Serra, a fourth category climb to watch the break of the day. There were many riders in the break, many teams were represented and was easy to predict a big advantage for them. 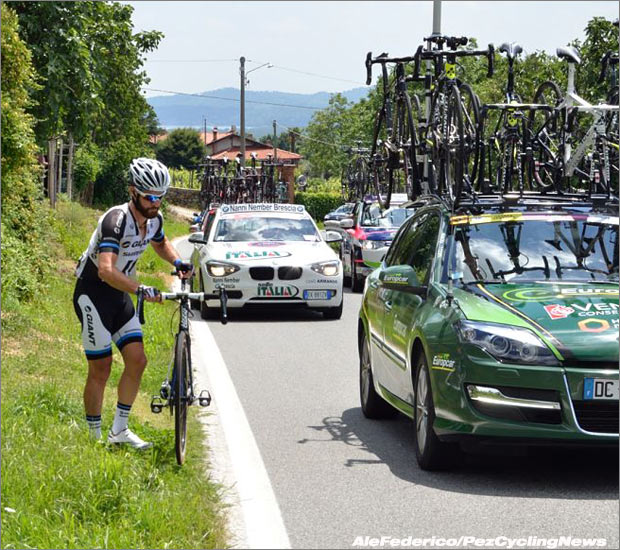 Geshke restarting after a pit stop. 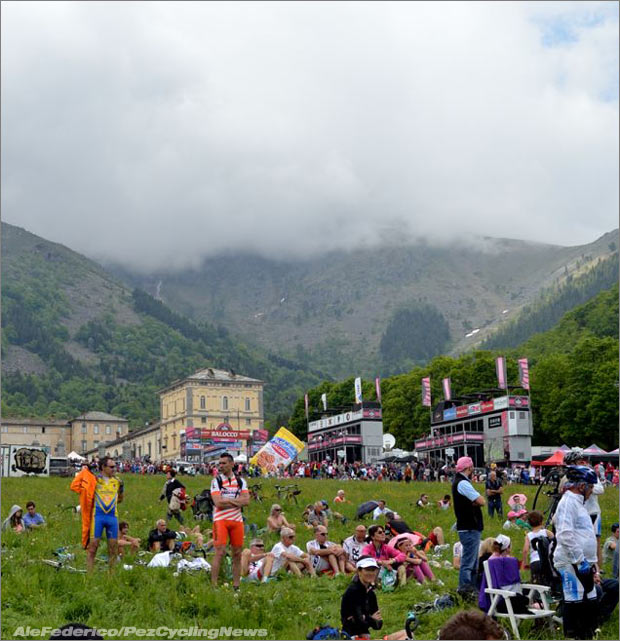 My next move was to the final climb, Oropa, the sacred mountain. On the top of it is built an ancient sanctuary dedicated to the Madonna and sacred for cycling because of the Pantani memories here. There were a lot of people especially on the two final kilometers and, as usual you could meet from tifosi to families passing a day out to the Giro. The breakfast in the morning was good and enough but I missed the lunch because of the race, so I enjoyed a local “panino con salamelle” made on the road by people owing a restaurant not far from Oropa. Fresh sausages, fresh bread: simply great stuff. 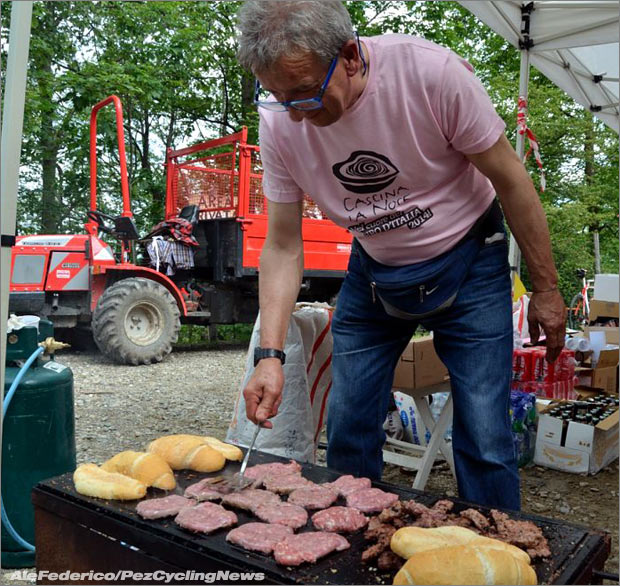 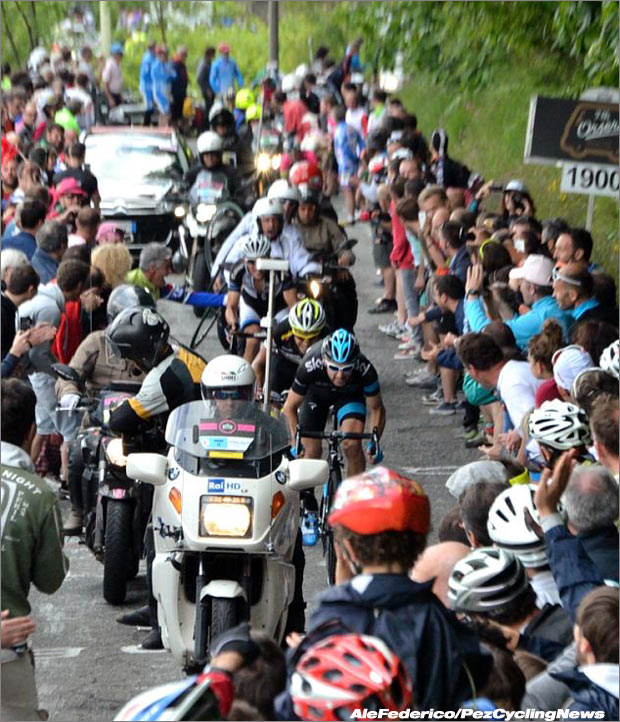 The race arrived and after many flat stages I finally had the opportunity to enjoy also the photographer job without the stress to do the right pic with no choice to fail. With riders so spread out, there’s lots of chances to shoot the right pic. 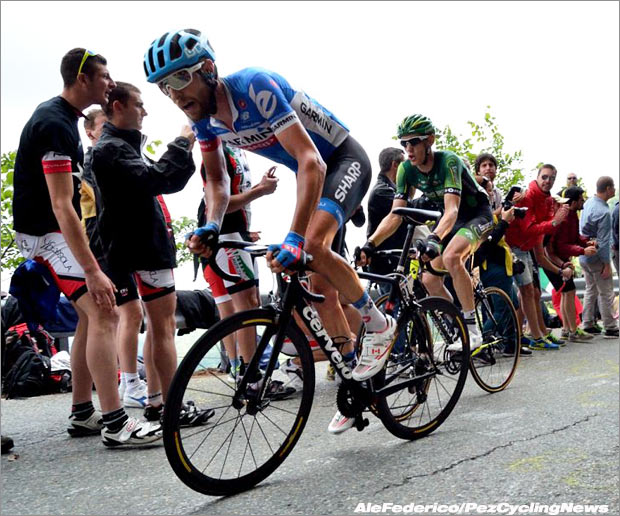 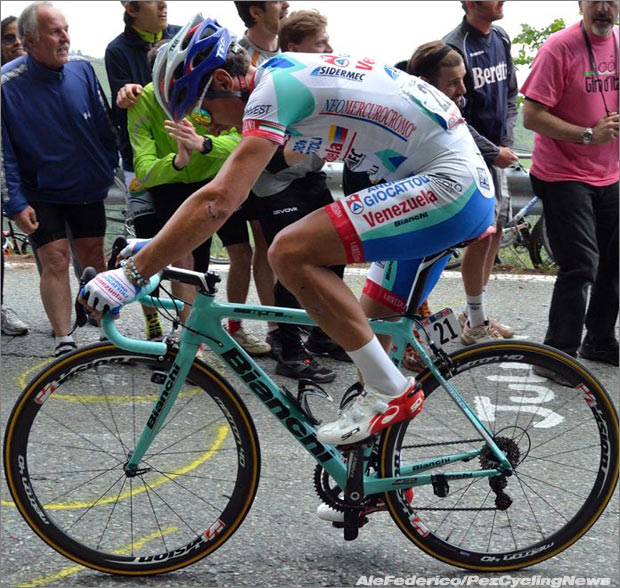 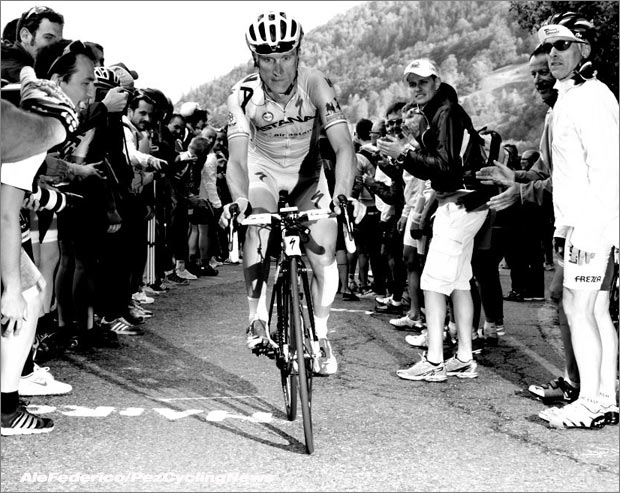 A special view of Gasparotto pain.

The action was great: I had the luck to witness Cataldo’s attack. It was quite impressive because you can see how much effort he put on the pedals for so long time; I had him in front on a strait way and was cool. But was also great watch Hesjedal action, finally showing his best. The surprise was Uran, dropped by too many. Special mention to the Colombian former champion Miguel Angel Rubiano: his body is full of abrasions and you feel pain just watching him. 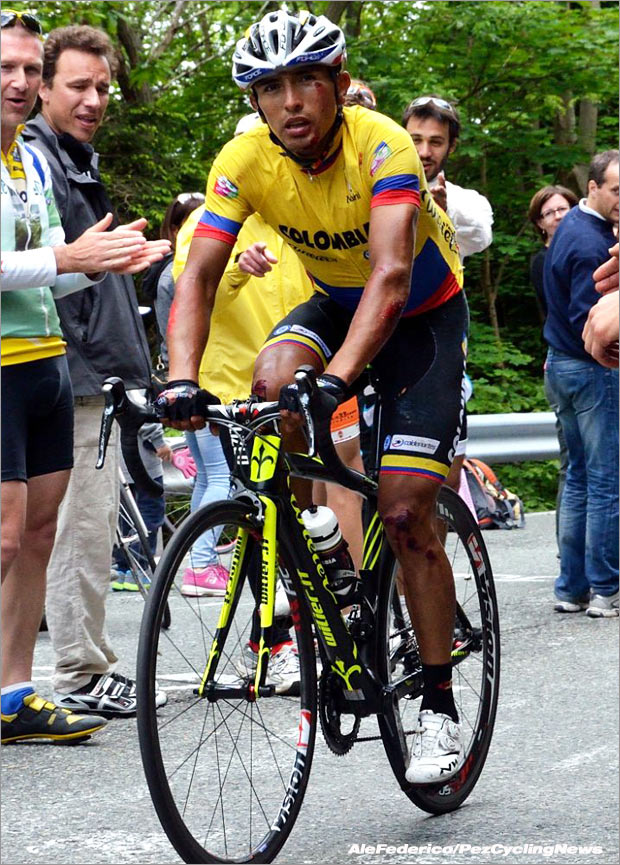 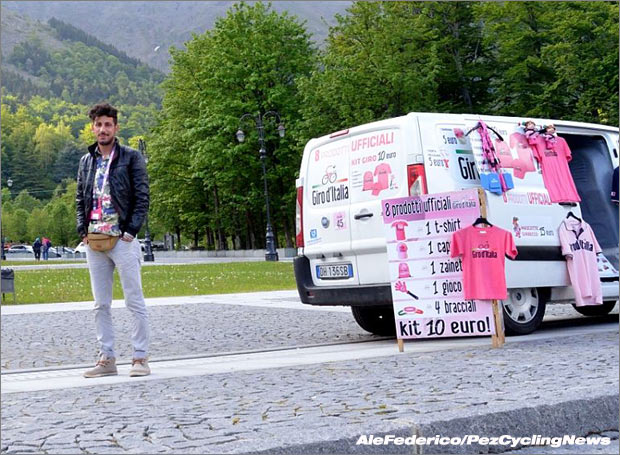 Clayton and his business.

Coming back to the car, on the way to the press room, I met an Italian guy, named Clayton – for the second time at this Giro. The first one was last week in Frosinone, where we stayed in the same b&b. He’s working at the Giro selling the official merchandising: a jersey, sun glasses, caps and few other stuff for ten euro.

If I look back to the beginning of this adventure I cannot believe that tomorrow is already Sunday and I’m going to quit out of the game. But now, I don’t want think that tomorrow will be over. There is still a stage to live from the beginning to the end and there are still several hidden stories I’m called to discover. 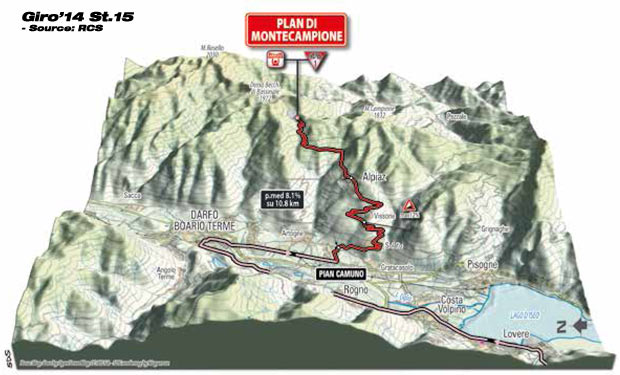 Tomorrow in fact the Giro will climb another sacred mountain: Montecampione. Also on those switchbacks Pantani’s name remained impressed after the great duel against Pavel Tonkov in 1998. Two men, two strong riders and just one possible winner of the Giro. Pantani was maglia rosa but had to attack because Tonkov was favorite by a final ITT the last day of that Giro. The Italian succeeded to drop the contender just at less than 4 km to the top after several attempts when everybody was already convinced that the opportunity was over.

I think we will assist to another battle. Today the contenders understand that Uran can be attacked and they will do it again. But tomorrow the break will not succeed: there are too many climbers still claiming a stage win: from Pozzovivo to Rolland, from Hesjedal to Quintana. I think the real Giro has still to come and possibly tomorrow may start another story.