ROADSIDE St. 3: Yesterday’s scenic boat ride to the even more scenic island of Ischia, served as the perfect appertivo for today’s 222km haul from Sorrento to Marina di Ascea (say a-shay-ah). This is possibly the most scenic corsa I’ve seen. Ever.

There was talk of it being a day for the sprinters, but it was clear from the opening kms that the route was perfect for a breakaway group. The first 70km wound along the famous Amalfi coast – on a tiny twisting road that would only slow the bunch, but allow a smaller group to ride much more quickly. The second section of pan flat drag down the coast would settle things down, but the final 80kms were all up and down, with a couple of decent climbs to offer up some great chances for anyone able to take them. 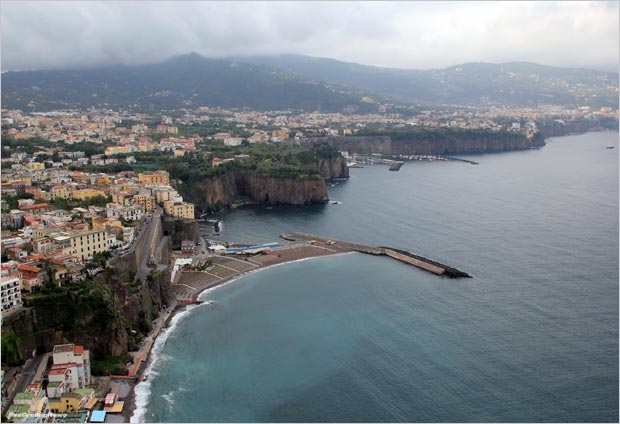 But our day started with a bumpy arrivaderci to Napoli – along streets that would be better suited to a Belgian classic than a major city. As much fun as Naples has been it’s time to get outta Dodge and head for some fresher air, and lesser garbage piled in the streets.

Sorrento is reknowned for its stunning views and gorgeous setting – perched on cliffs above the Gulf of Napoli, it’s clean and orderly streets could almost cast a disapproving eye at the distant Naples. 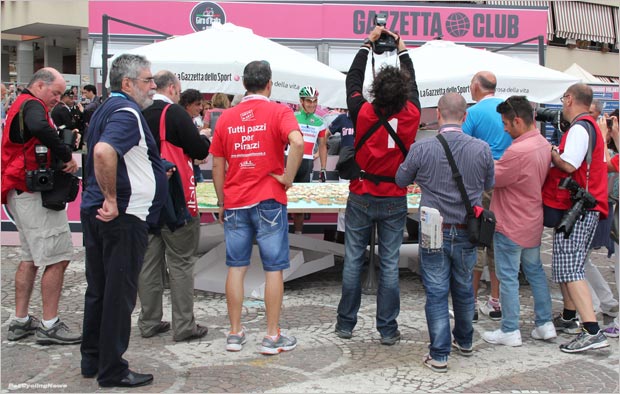 First order of business for the day was to check out the start scene. And while we missed the later part of rider sign on, (we had to jump onto the corsa ahead of the race), I did get a pic of all the big photogs getting a pic of Pellizotti eating a fruit tart from a giant map of Italy – made entirely of fruit tarts. (You’ll see a pic of it posted on the usual sites). 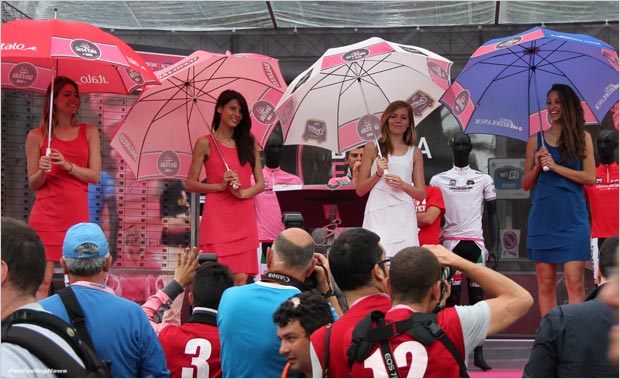 Then I got a small chuckle watching the same photogs clamour for the shots of the race’s jersey/ umbrella girls on the main stage. Everyone enjoyed the game and I see I’m not the only guy taking pics of pretty girls. 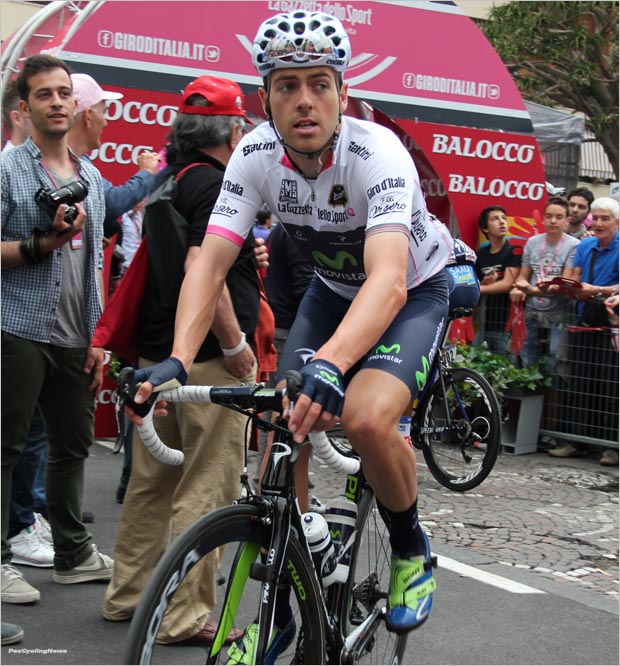 The white jersey for best Young Rider was looking good on Movistar’s Alex Dowsett, even though it officially belonged to this morning’s race leader Pucci. I shouted some encouragement as he rolled by, and he politely thanked me (which is a lot more than must riders do). So I followed with an intro and he took the courtesy up a notch with some kind words about the site – (always nice to know we’re scoring some page views from the pro ranks.) 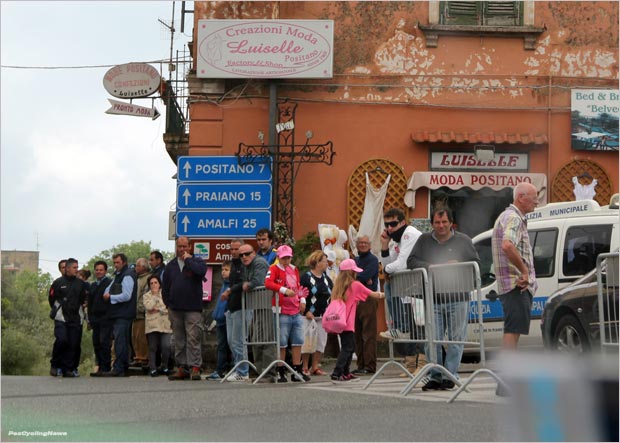 Then 30 minutes before the start gun, we rolled onto the course for a closer look and a full pull drive to the finish. The corse climbed straight up and out of Sorrento – rising over a hump that is the spine of a mountain and gaining 312 meters in the first 20km . Once we crested the top – it was smackdown time as the view of the coastline spread out before us like a velvet painting. 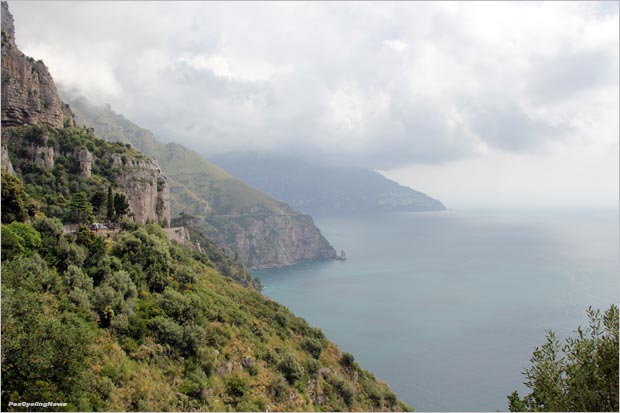 I know I’m stating the obvious, and as such a popular tourist destination there are millions of people who know this already, but man – seeing the Amalfi coastline for the very first time is pretty damn jaw-dropping. 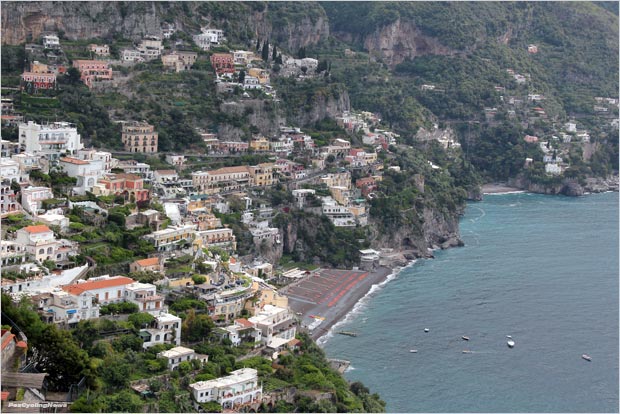 What’s even more amazing is that it goes for 70km – jagged peaks tumbling to the sea below, sheared cliffs that long ago broke away and smashed to bits a hundred or more meters down. It rolls in and out from craggy bay to craggy inlet and back. 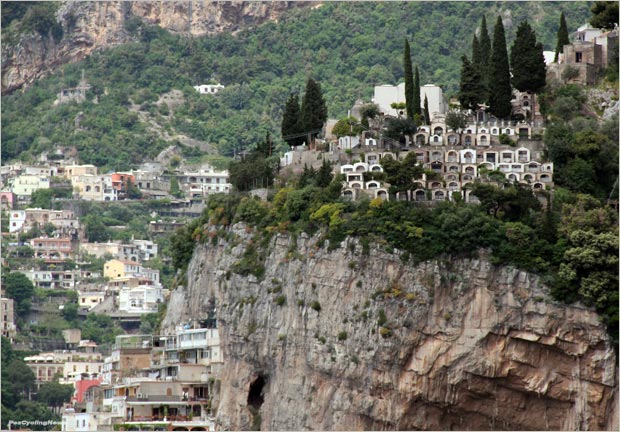 I’d planned to do a Top Ride along here, but my bike plans took an unexpected turn leaving me senza bici. It would make for an awesome ride – up and down but never too steep or long – but the amazing views might make it hard to keep your eyes on the road. 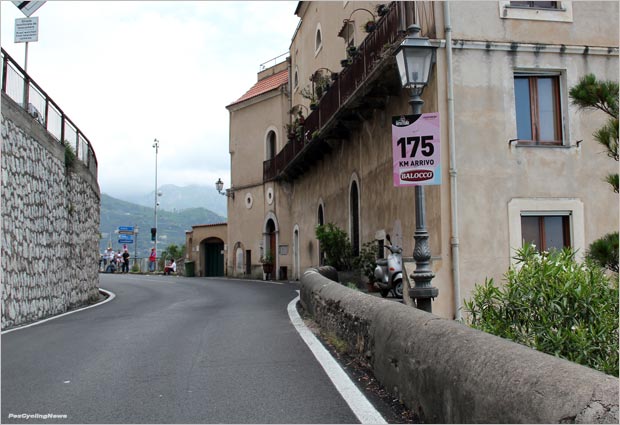 We stopped along the way to shoot the race, which put us behind the procession. Getting ahead of the race later would be a task indeed, but that’s where a skilled driver comes in handy – and Mino did me proud again today. 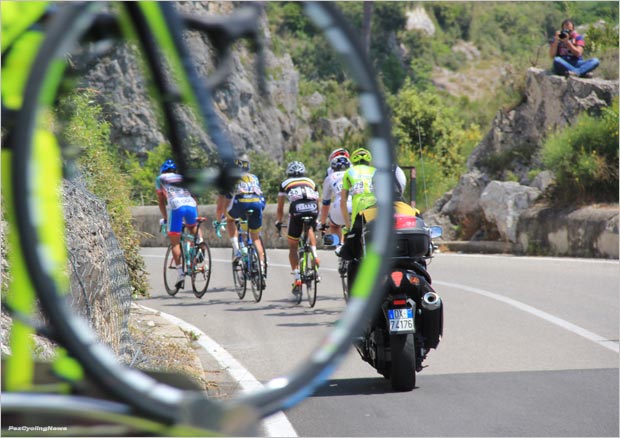 First the break came by…

…and a few minutes later the Team Sky led peloton. 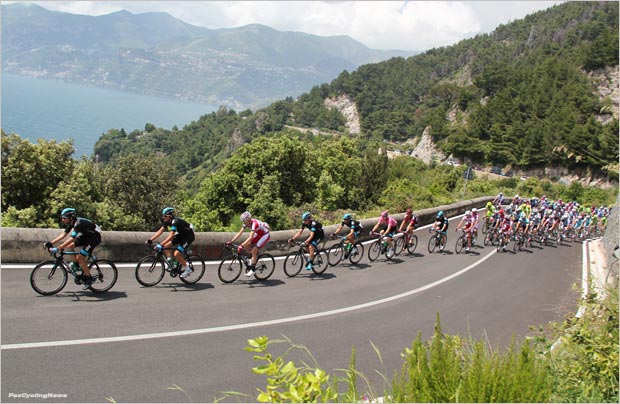 Having an Italian driver in Italy is really the only way to go if you need to get somewhere fast. High speed corners? No problem. Oncoming traffic? He doesn’t flinch. Laying on the horn should anyone give so much as an impeding glance? Natch. Straight up the middle to make that pass? All of the above. 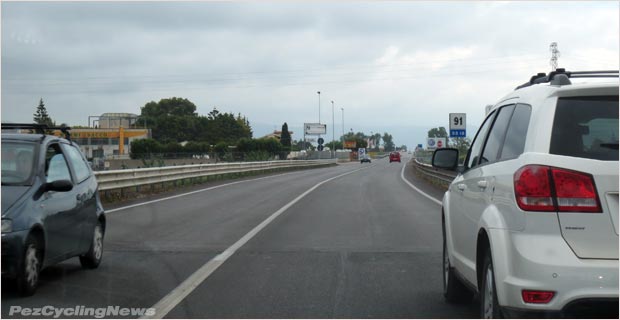 A couple of deviations and some rally style got us so close to passing the race that we could see the helicopters nearby – signaling we were at the sharp end of the stick. But some diligent carabinieri and other factors caused us to just miss the window, forcing us to slot in at the tail end of the race. 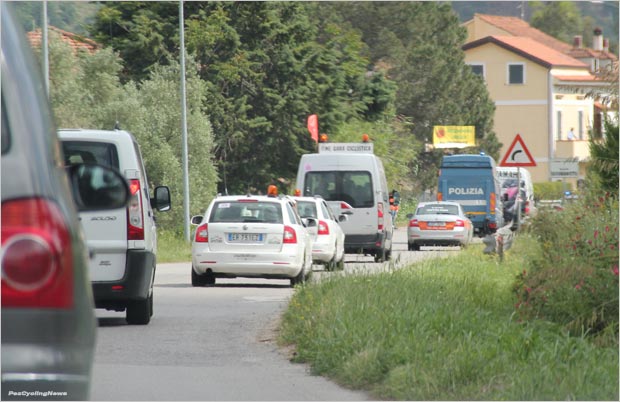 Finally the race started the first climb near the end, and we took a short cut and found a wide open road closed to local traffic. I could tell Mino really likes driving rental cars. Especially fast. I’ll admit that was pretty fun, and after this mornings joy ride along the coast – this rally run was just the thing to jolt the old system back to life. 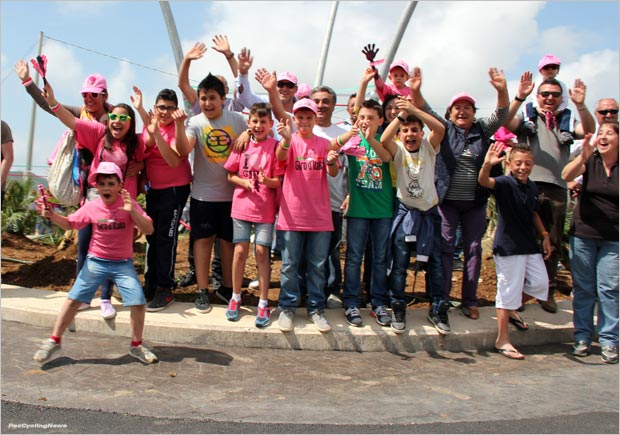 Some people say they don’t like driving in Italy… I can’t imagine NOT driving here – and I highly recommend it.

But I’ll sign off with this long shot of the race off in the distance – you can just see the peloton snaking along the coast on teh left side across the bay. 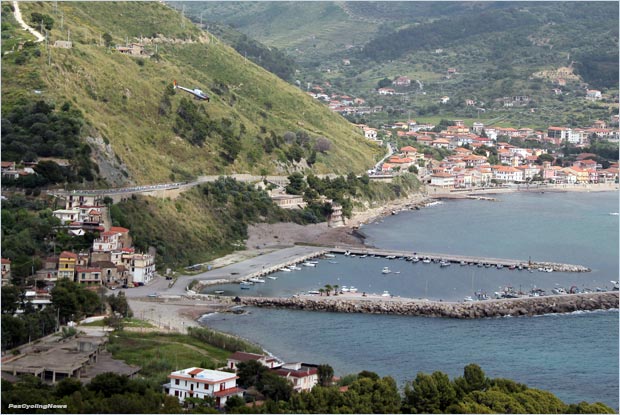 It’s almost negroni time, but we’ll be back tomorrow- .
Keep it dialed PEZ and thanks for reading –
– Pez

Lotto Belisol: Dirk Bellermakers in the escape in stage 3