Giro’14 Stage 16: This morning at 8:30am, PEZ-Man Steve Prokop rolled out of the warmth of Hotel Funivia to finally live his lifelong dream of riding the famed Stelvio. A light rain was falling, the temp was -1.5C degrees at the top, and there were only 18km to climb to the 2760m summit – how hard could that be?

PEZ Sez: Steve’s been talking about riding the Stelvio from the moment he agreed to cover the final week of the 2014 Giro d’Italia as part of our PEZ Roadside crew. As an Australian, he’s tough, or at least persistent enough to get the job done, come what may. He’s also easy-going, which I’d surmised as an asset when throwing him into the 24/7 chaos that usually defines our Roadside workspace. On one of the worst days of weather we’ve seen this Giro, Steve set off on the ride of a lifetime… 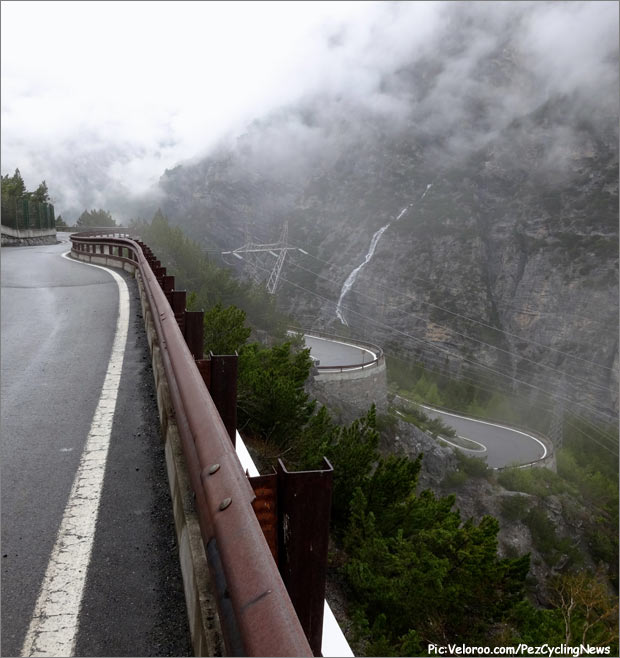 Passo Stelvio has been the dream of many. It is an unforgiving harsh environment but is also a place of beauty. Since I first saw a photo of the northern climb 30 years ago I have been dreaming of this road. The scale of it, the hairpins and the lack of guardrails all fired my imagination. Growing up in Australia further emphasized its remote mystique. My mates and I would debate what car we’d take, Lamborghini or Ferrari at first, progressively moving down the price ladder to something more realistic. Into our late teens, the focus shifted to motorbikes and now there is the opportunity to do it by bike, the purest form.

Since starting in Ireland the weather has not been kind to the Giro peloton. Would it be the same for the Stelvio? Daily checks of Stelvio’s weather a week out suggested yes.

Arriving into Bormio on the Monday night, the weather update was for snow. The weather forecast was for rain in the afternoon and chance of a storm. Cloudy and snow in the morning. Morning it is. 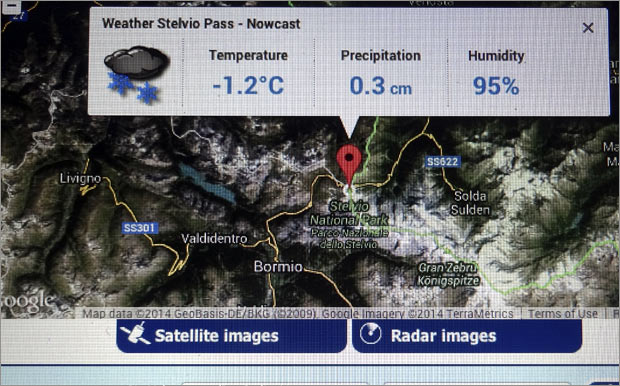 We woke to wet roads in Bormio and not a soul stirring. I put on 5 layers – hey, us Aussies don’t see much snow – and headed down for breakfast. Other guests asked if I was riding today, of course, yes! Declaring I was mad they turned their attention back to their Italian breakfasts of rich coffee, fresh pastries, lashings of hams and cheeses and fresh fruit, and don’t forget Nutella…

Leaving the excellent Hotel Funivia at 8am and winding through the streets of Bormio there was little to show that the Giro was passing today. That was to change once on the climb as the pink directional signs started to appear. At the first hairpin turn the special Tornante sign helpfully tells us there are 40 more to go before the summit, the countdown begins. 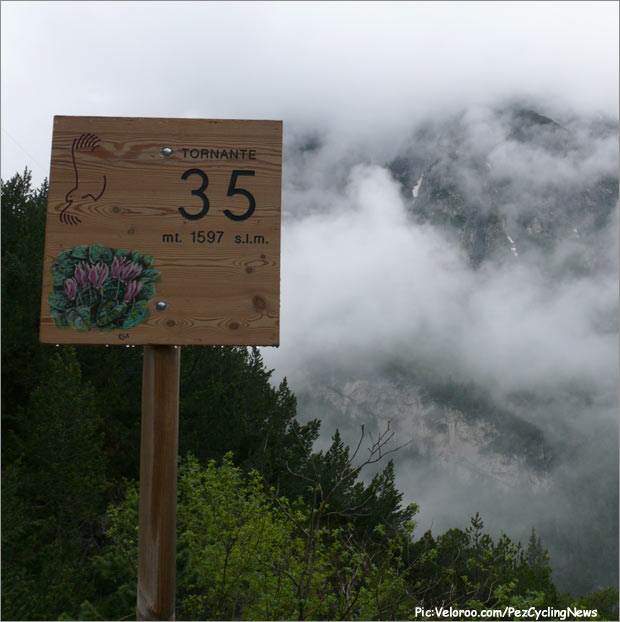 Five corners in and the climbing has started in earnest, the views taking your breath away, and the cold literally so.

The climbing is beautiful. I have picked up a local. He must be local as he only has what looks like summer kit on. It is too cold for me to take a photo.

It is not long before the climb becomes dramatic with switchbacks folding upon each other like giant straps of licorice. Incredible gorges and snow melt waterfalls take my mind off the 10% gradient. The higher we go the thicker the cloud becomes.

Google search of images always bring up the northern climb due to its dramatic view. Little is shown of the southern approach but it is stunning. At the 8km mark the air becomes suddenly a lot crisper. I am sweating as well, so I ditch the rain jacket and sunglasses (just like the Pro’s – PEZ organized a support vehicle).

Then come the tunnels. They are great in a car but on a bike, going uphill, you have time to glimpse views from the “windows” into the gorge, most are curved so your exit view is completely different and a nice surprise. Their lights show off the aged stonework of the original narrow curved ceiling. 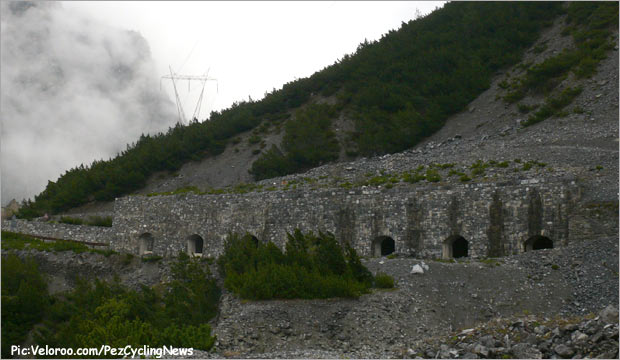 We have been climbing now for some time and enter yet another tunnel. We were not expecting to see what was on the other side. Across a green field, the road rose above us zigzagging left to right and right to left. More importantly, Camper Vans! They are strategically positioned to take advantage of the view down the cascade of tornanti. 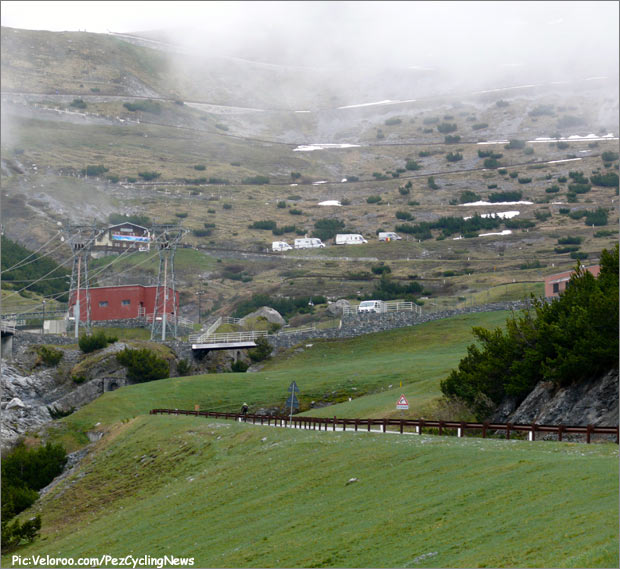 One camper is even complete with snowman proposing mechanical support if needed. 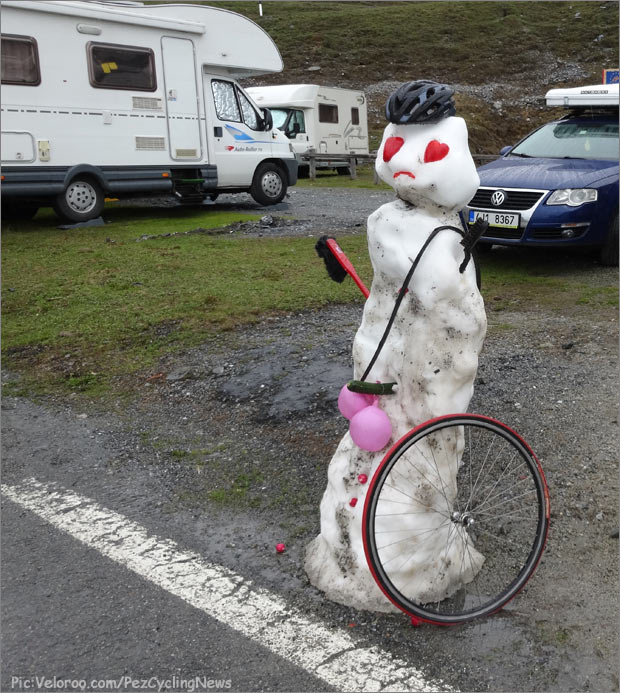 Reaching the campervans a 10 km mark painted on the road is met by my disbelief. Someone may as well have put a bag of rocks on my back. Surely not! I feel I have climbed at least 3/4 of the way, not half. Mt Ventoux was never this tough. Stelvio in the cold and mist is tough. What would it feel like with 100 kilometers in the legs as the Pro’s will have to endure. Beyond my imagination. 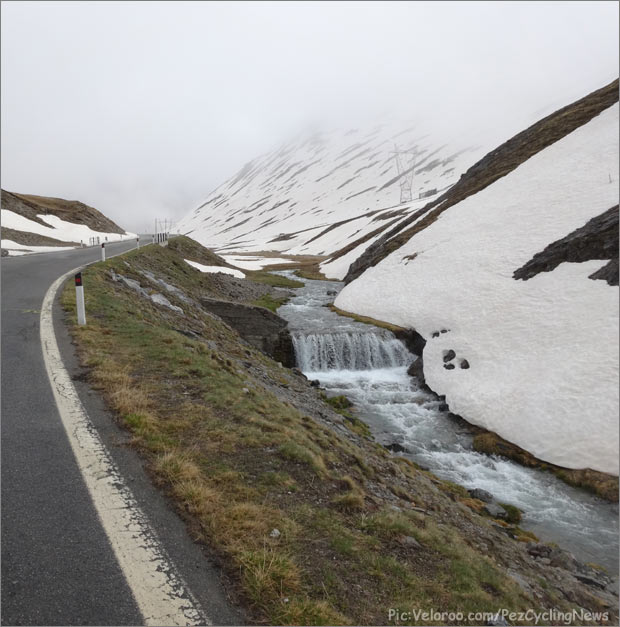 Then there is false relief, a section of 5% for a kilometer, surrounded by snow it is a paradise and the sun even breaks through the cloud. Has the weather man got it wrong? 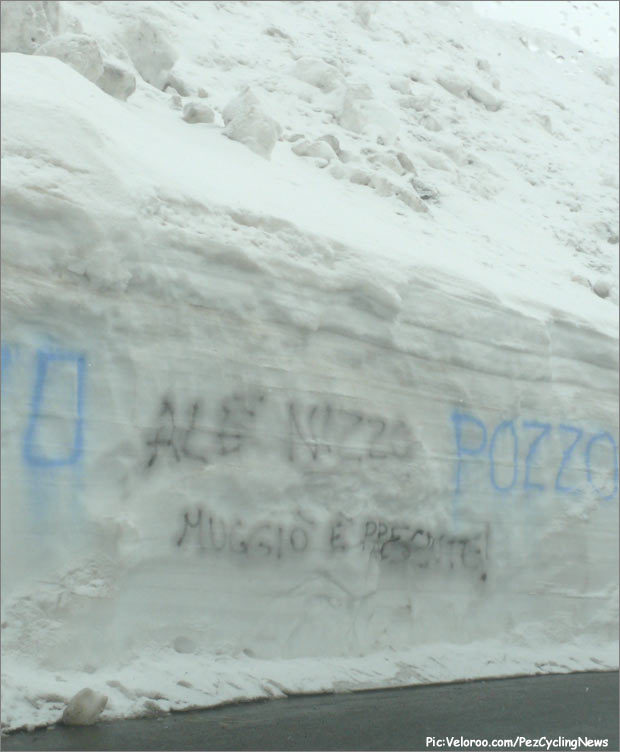 Without warning, the cloud arrives and the road rises again to 10%. This is cruel. Now I have a canyon of snow either side, it is a magical scene. I hit single digits on the tornantes for the countdown. I can see the summit, only 2 kilometers to go. 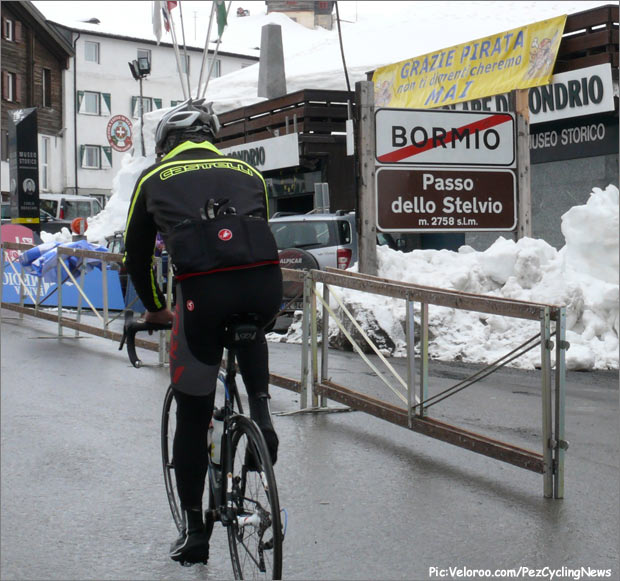 Reaching the summit, I taunt myself with a look at the view through my own eyes that I saw for the first time 30 years ago. It is incredible. It is as rewarding as it was challenging. There are clouds coming up the valley. I simply cannot imagine the Pros firing down there in these conditions. I wanted to ride down and up this side again, but not today, the weather has seen to that. 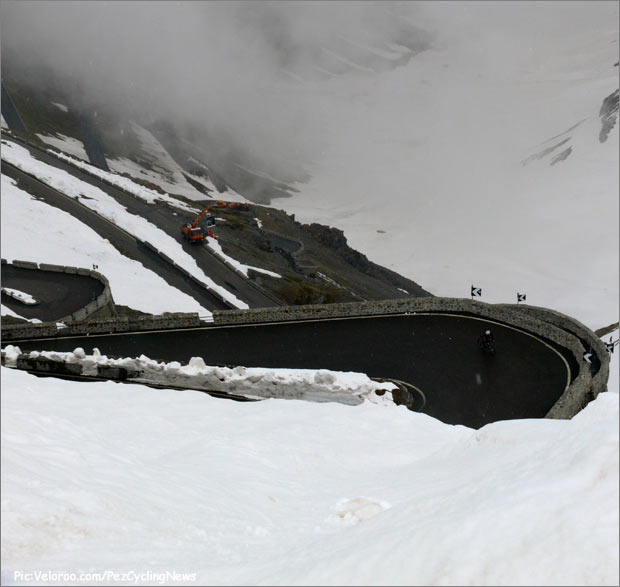 I ride down to one of the corners for a photo and as I turn, the cloud has engulfed me. Visibility has been reduced to just a couple of meters. 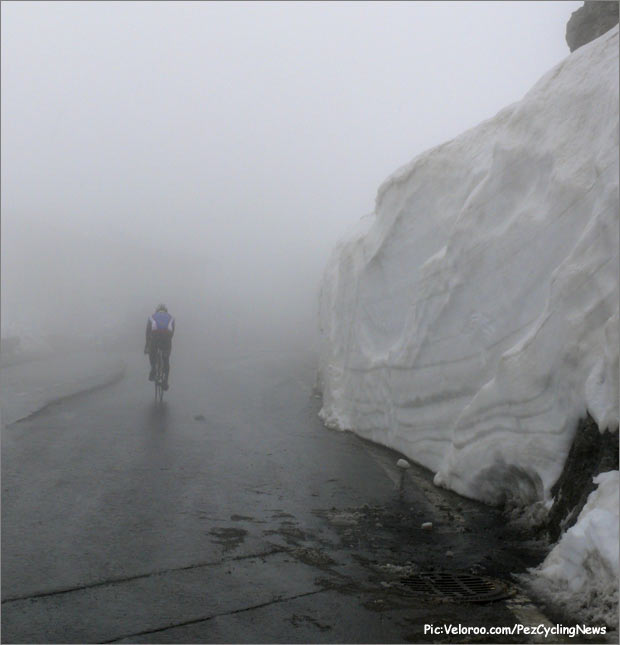 I am now in my first snow storm. Incredible. I ride the 800 meters back to the top. I am freezing and losing feeling in the tips of 4 of my fingers. I know that the car is only a couple of meters away and I am thankful. I’m cold, frozen and unlike the pros, don’t have another passo to climb. Passo Stelvio is telling me I have to return when she is at her most beautiful.

We decide to watch the pros from the camper van area, Casa Cantoniera. Speaking to people at Hotel Funivia afterwards, we made the right choice. 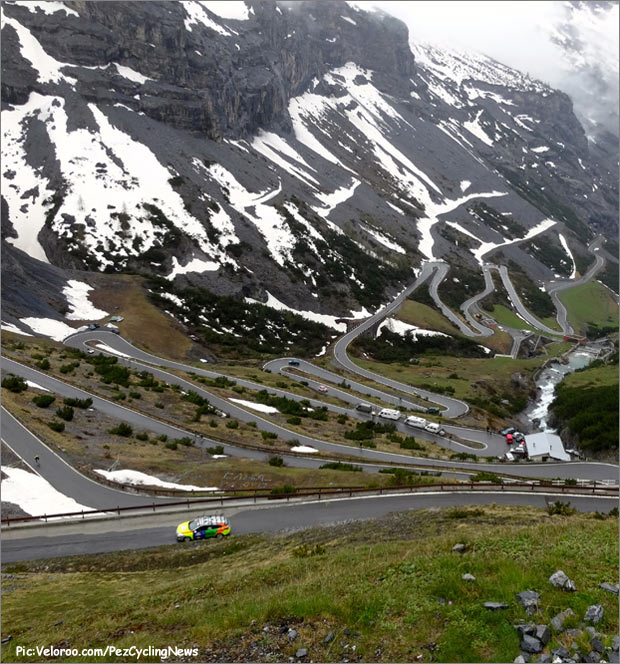 At around midday, the spectator riders started to arrive. For an hour and a half we watched the moving bike show go past, all sorts, MTB and road bikes, fully kitted and some barely dressed as the cloud descended and eventually snow fell and still they came. With 10 kms to the summit some were in for a tough day in the saddle. 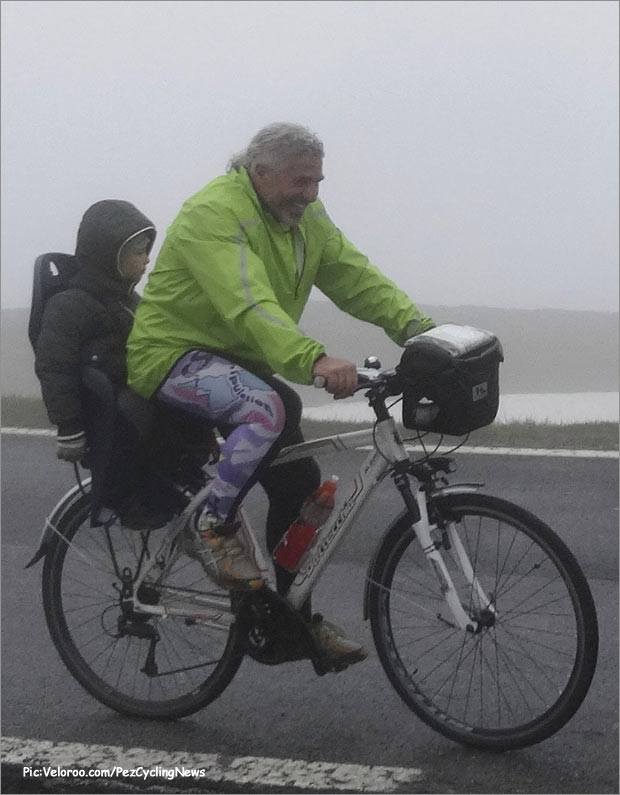 Then it was the pro’s turn to come through. By this stage they had been smashed apart, a solid 20 minutes spread across the peloton. For 3 hours we waited in grim conditions, always thinking that these guys are riding through this, over Passo Garvia, before continuing onto the finish.

A breakaway of 10 riders appeared through the mist first and wound their way up the slope. About a 2 minute break was a sizeable bunch, before a few more groups came through. Then depressingly, single riders came through, stuck in no man’s land, surely riding a living hell. Finally the last bunch came through, and from the first man to the last, everyone was at the end of their tether and deservedly so. It was equally painful and incredible to watch. 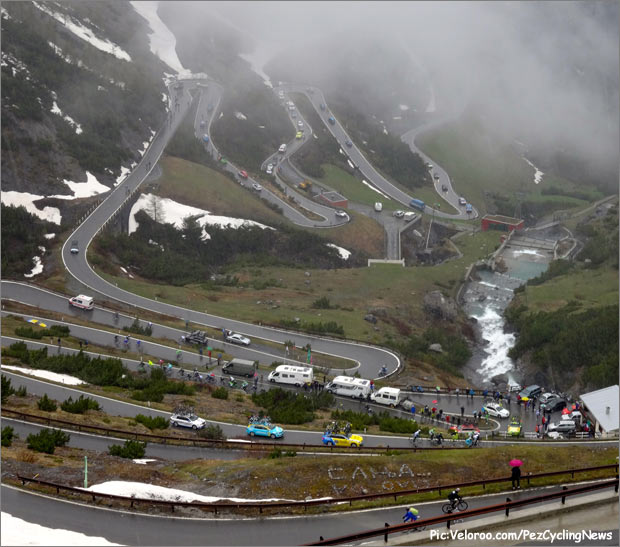 The bunches and support vehicles provided an amazing spectacle as they moved across the mountain. Everyone watching was simply in awe. The riders’ determination palpable.

Poor Julian Arredondo (Col) was the last man past us, but his efforts were no less than those of all those before him. 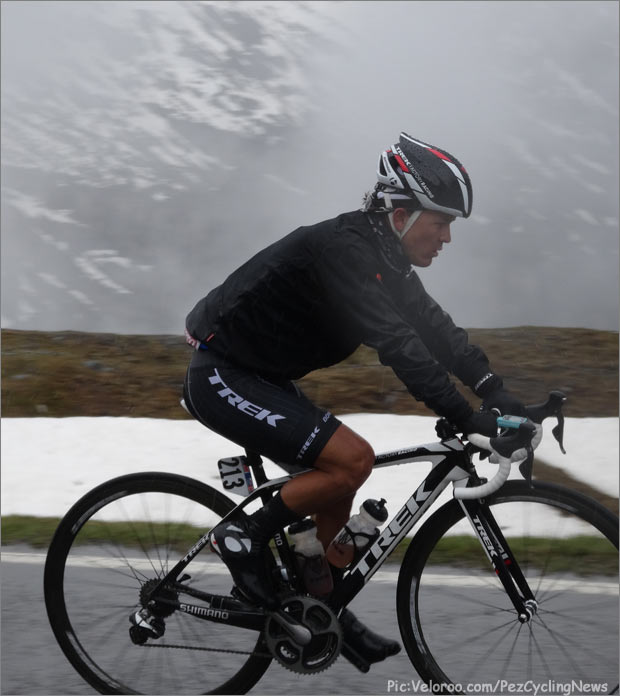 We got back to Hotel Funivia and the lounge area was packed with people watching the stage finish. To see Quintana win by in excess of 4 minutes is nothing short of super human on a day like this, let alone factoring in the weather.

To think that there are 4 more mountain stages, this is a Giro that must go down as one of the hardest. Tomorrow’s “flat” stage will be one that the whole peloton will be relishing after today’s hell.

Julia and I are just sitting here in disbelief as to what we witnessed today. The weather. The scenery. The cold. The efforts of the whole peloton. It was worth the 30 year wait, and when we come back, will be stunning to see this area at its best.

• Book a Room in Bormio

Here’s what happened on Stelvio

Drapac Professional Cycling to make US debut in Philadelphia