Roadside Report: The mountain time trial was a tough test for both riders and our Roadside reporter Steve, who took on the climb and the Italian security guards before descending to the start village to mix with the riders and tech on display.

Today was a numbers game.
• 19. The Stage Number for today.
• 26.85km The distance to be covered in today’s Individual Time Trial.
• 1712m The height of todays climb
• 40. The number of Tornanti to be tackled, each providing a small window to rest.
• 14. The maximum percentage of gradient.
• 5. The number of times I swore at my Garmin for saying my cadence is too low.

Bassano del Grappa to Cima Grappa. On the google maps when researching for the day’s plans, the meaning of the numbers didn’t really translate. I related them to what I had done previously. Wrong. The Giro organizers presented a stunning route through thick forest, before opening up into highland fields, leveling out and kicking you in the shins again for the final climb.

With storms forecast for this afternoon, it was another day of starting in the morning. It didn’t take long to realize that today was going to be even more popular than yesterday’s climb up Rifugio Panarotta. We were seeing cyclists making their pilgrimage to this mountain at least 15 kilometers away from the start at Bassano del Grappa. Once reaching the top we wanted to head back to the village to see what was happening for the public and see the riders warm up before putting the story together in front of a TV to see how well the Pro’s tackled the same sinuous strip of tarmac.

Here are our highlights of what was an exhausting and exhilarating day at the Giro. 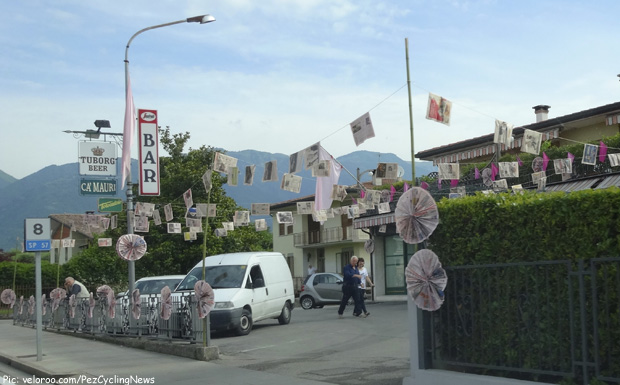 Arriving into Bassano del Grappa it looked like the sales of the La Gazzetta Dello Sport probably hit an all time high in the town with many displays similar to this one. How is it that the Italians can make folded newspaper look so festive?

The mountains are in the distance, and when you look at them it’s not possible to imagine that a road can go up such a vertical slope. The heart rate goes up just thinking about it! 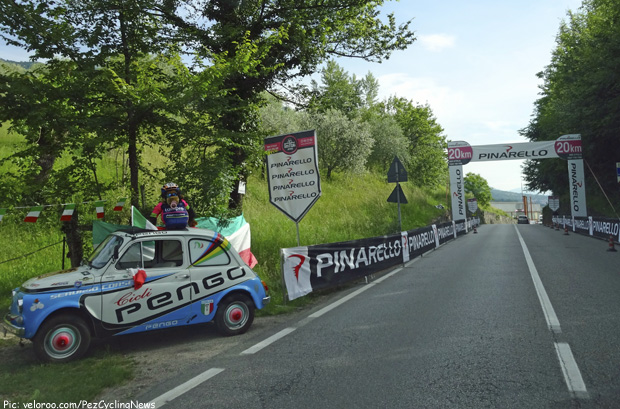 Over the last few days, the genuine passion of Italian Cyclists has been in evidence. Another thing that has taken me by surprise is the number of brand names of bikes, bike parts and more that I had never heard of before and they all add to the spectacle and the great ‘feeling’ around the Giro. The guys from Cicli Pengo did some great advertising bombing with their car – who needs to pay for Giro inclusion when you can just park your car on the side of the road? 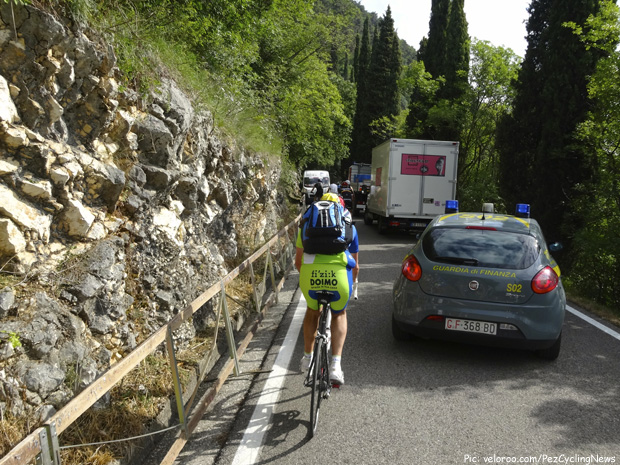 Chaos Italian style: Part 1.
How do you get a huge number of cars, people (loads were walking as well) and cyclists up a narrow steep and winding road as inconveniently as possible? Make sure that at 10 in the morning you are still setting the advertising banner frames up! No one was getting upset, other than traditional Italian hand waving or horn blowing from the cars which could be heard all the way through the mountains after this bottleneck. 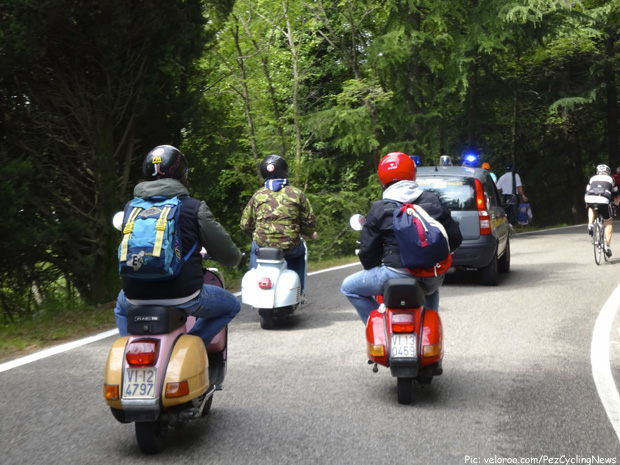 And if you are in Italy climbing a hill why not get gassed out by some classic Vespa’s. I want one so badly right about now. 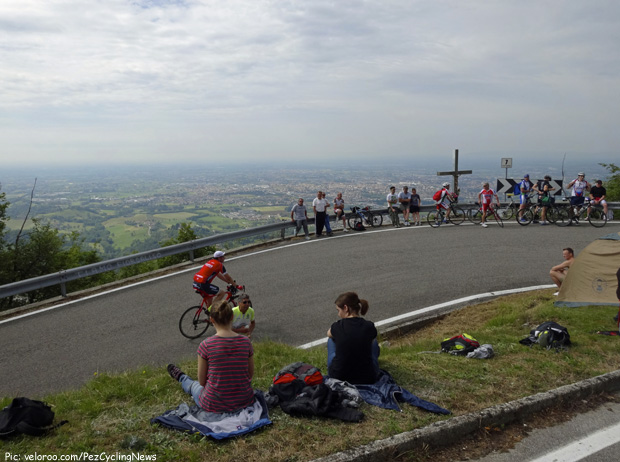 Not only do you see numerous crucifixes around the lands but the rider in red on the right (above) kissed his fingers, touched the feet of Jesus and made a sign of the cross before moving on. Although not religious myself, it was a nice moment to see such tradition is still alive. 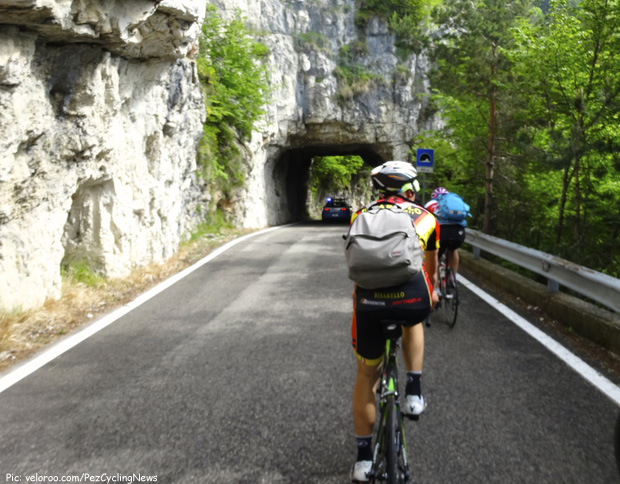 The change of scenery was great, as was the tunnel, but the best part was the short flat section that took the load off the legs for a little, before hitting the 500m long 14% section at the 21 kilometer mark. 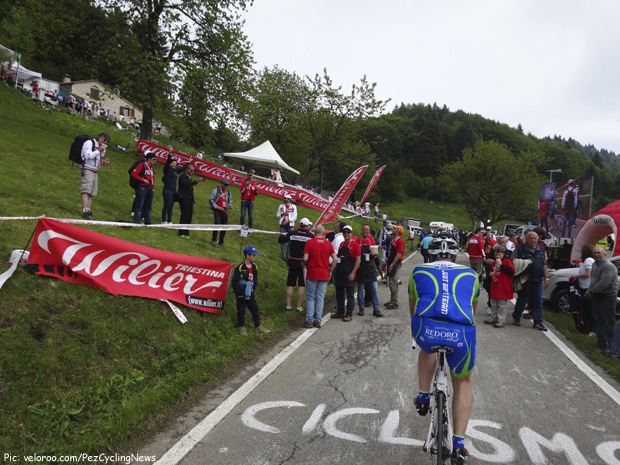 Once at the top the Wilier people were handing out electrolyte drinks…or was it Rosé? 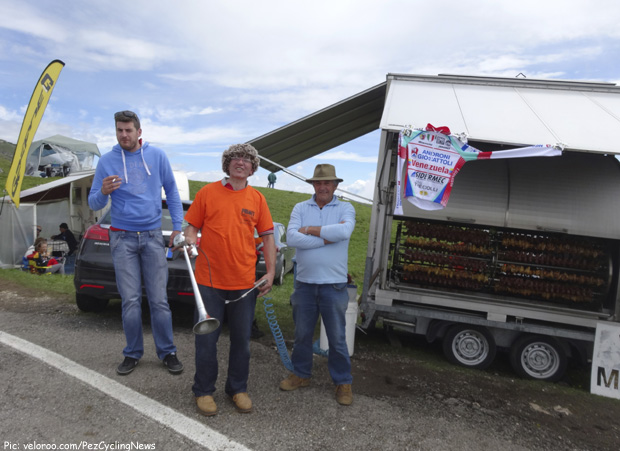 Want a crazy party? Bring some Dutch! Their compressed air horn was a serious bit of kit. 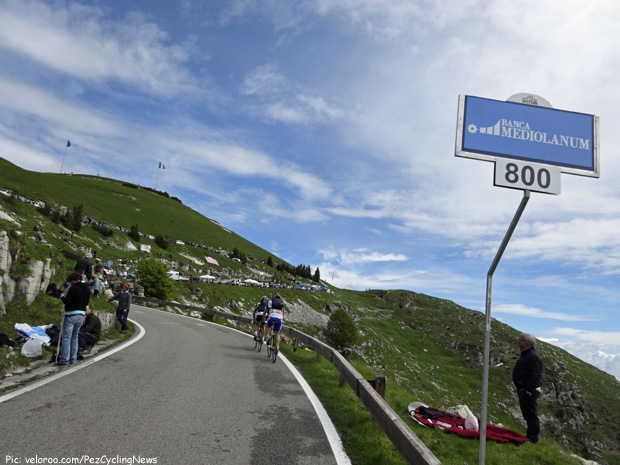 So close and yet so far. I have never seen 800 meters look so technical. The cloud was coming in from the right hand side fast, so the race was on to see if I could get to the top before it did. 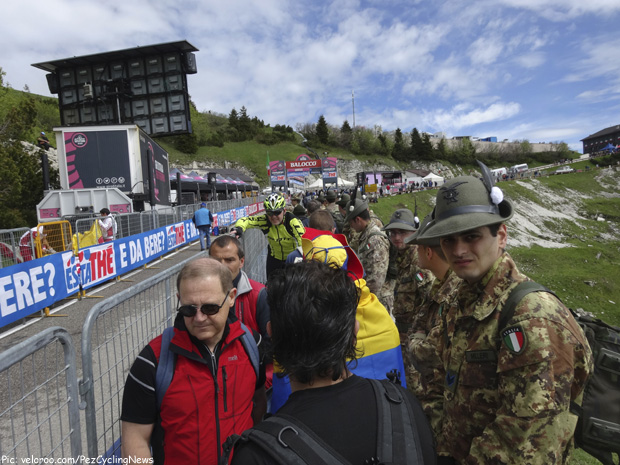 And then this is what we faced an achingly close 150 meters from the finish banner. Military security and ‘No bikes – even for press’. 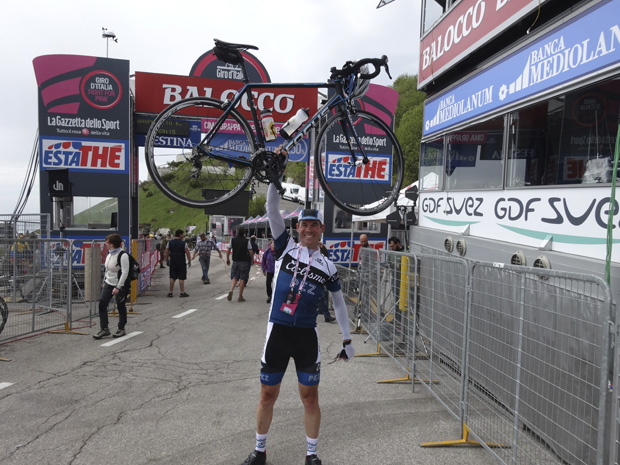 But after some negotiation with a friendly security guard, he agreed to let me through and even took my photo. Top Bloke I say, Grazie. 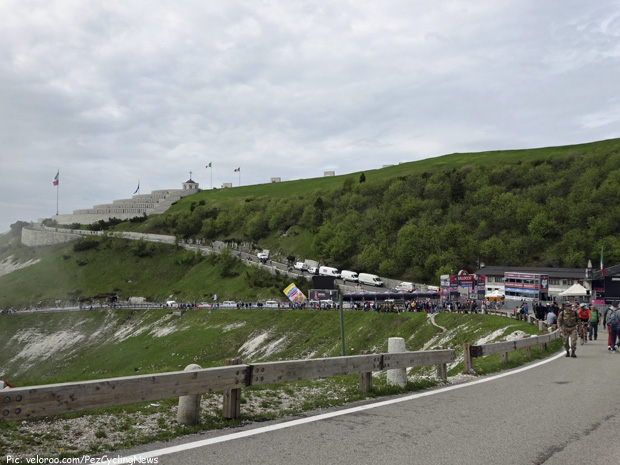 Cima Grappa is a massive War Memorial where 20,000 soldiers have been laid to rest. It is a very sobering place, but it is nice to see that the monument of their sacrifice is now a place of international celebration.

After the climb and the memorial visit it was now time to head down to the start village and check out some machines and riders getting ready for the TT. 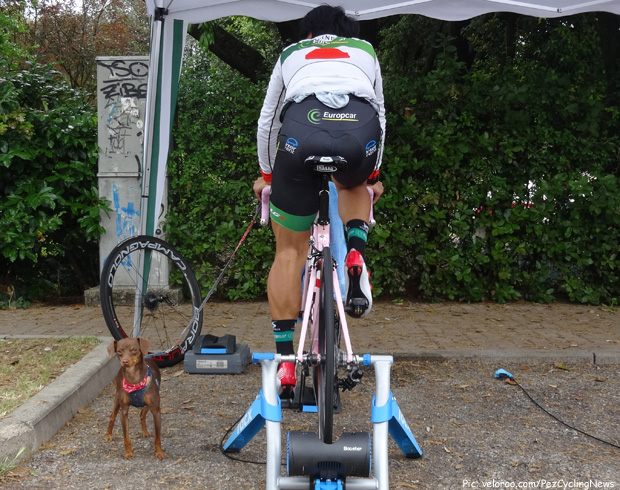 Japanese champion Arashiro had nobody but a little dog for company. 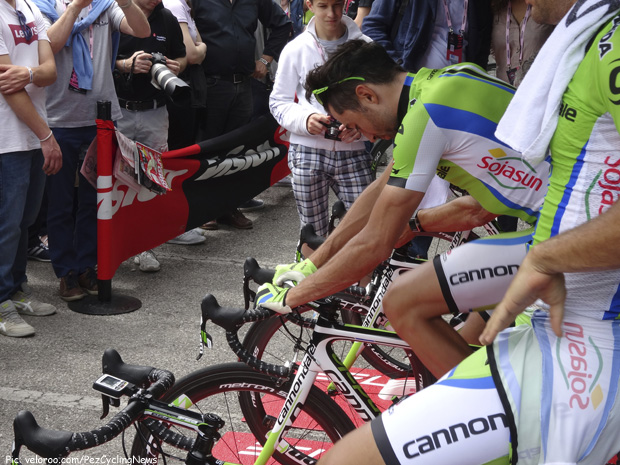 Whilst the Italians over at Cannondale had media, fans and hangers on all around them. 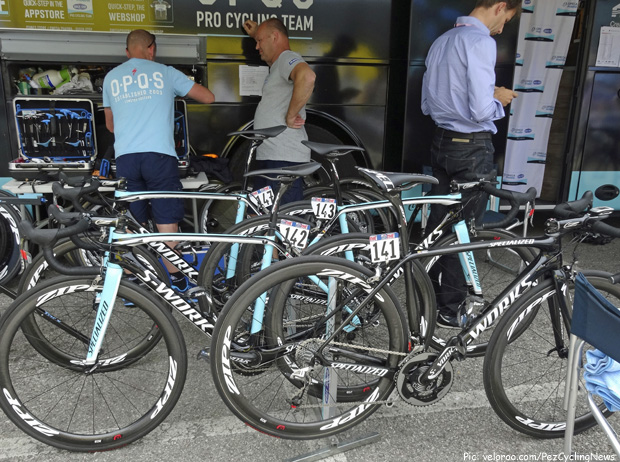 The mechanics had a fairly easy day today with almost every rider using just their road bike with only the big GC boys bothering to use a low profile rig for the first few kms before swapping to their road bike when the going got tough. 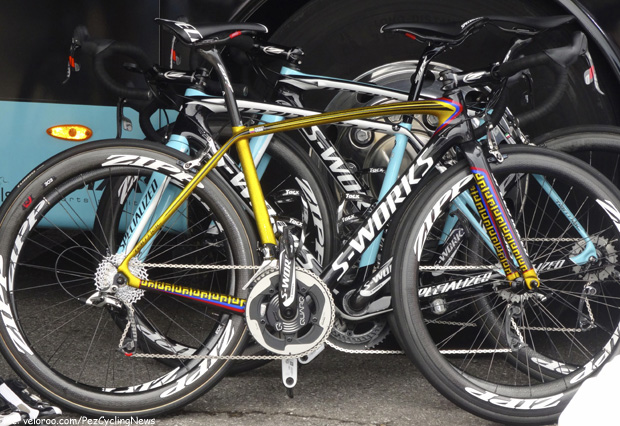 I’ve been admiring Rigoberto Uran’s custom S-Works for a while now and today I finally got the chance to get up close to it. Cool paint job but after today’s race it looks like he won’t be having a custom pink one anytime soon unless Nairo Quintana cracks spectacularly tomorrow. 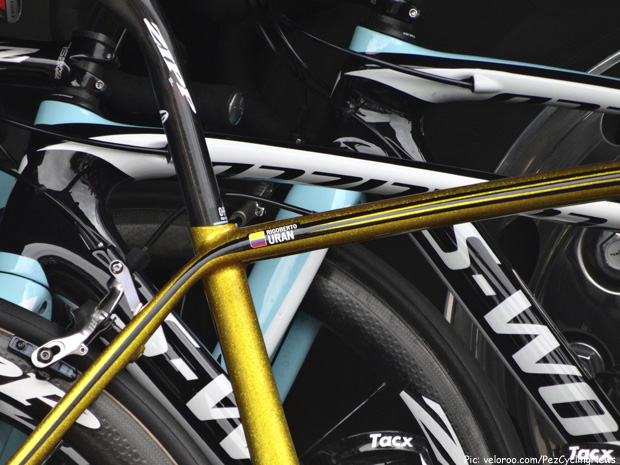 After visiting the village area it was time to see the pros take on the race and we started by watching a few of the guys take the turn before the start of the climbing. 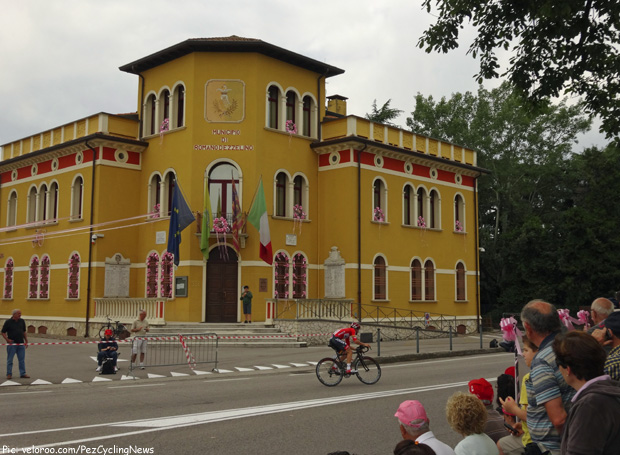 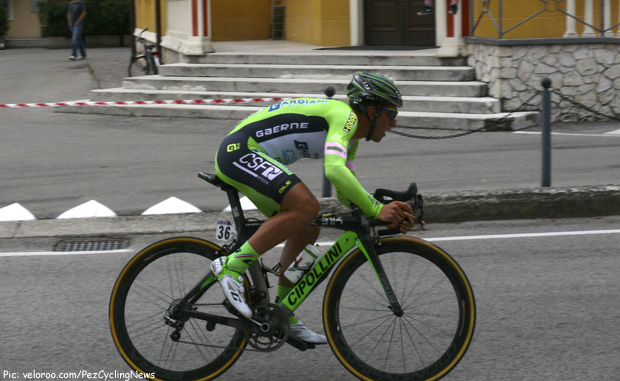 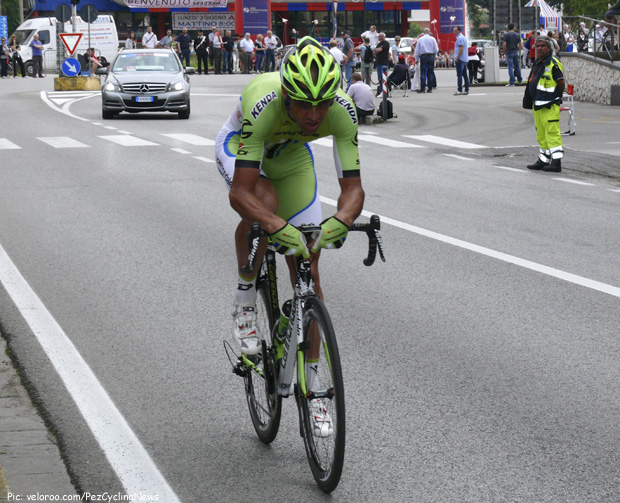 While others adopted the “Seldo” position (PEZ’s editor, my riding buddy and a great believer in getting aero at all times), conserving energy to use later in the climb.

Watching the Giro on the TV, it was great to see that the clouds mostly stayed away for the huge crowd. The last couple of days have really been awesome as the fans come to support the riders, teams and the Giro and the riders have been putting on a great show.

All eyes are now on the Zoncolan with it being the biggest cycling challenge I have ever undertaken. Monte Zoncolan – 22%. I’ve read PEZ’s suffering session report from the ’07 Giro and talked to others that have done it but I don’t think anything can really prepare me for the pain ahead. Wish me luck!