Roadside Report: Today it wasn’t Julian Arredondo first over the finish line but PEZ’s own Steve Prokop who took off early on his bike to ride the last climb and take in the atmosphere of the beautiful Rifugio Panarotta. He then descended to the cobbled streets off Levico-Terme and its steep gradients to watch the pros come through where they made it look all too easy. A perfect day roadside at the Giro.

PEZ’s Stage 18 plans – go to Levico-Terme and ride the solid 16.8 kilometer climb – averaging 8.4% and peaking at 14% – to the finish at Rifugio Panarotta, come down again and watch the peloton race through Levico-Terme. Weather forecast is partly cloudy in the morning with a very good chance of rain or a storm this afternoon. Morning ride it is then!

The half hour drive from our hotel in the mountainside village of Bieno to Levico-Terme has us once again marveling at the beauty of this region. The winding road soon turns onto the main freeway but the views don’t stop there. Behind the mountains lining the highway massive mountains peaks appear. All along the road, cyclists are making their way to their vantage point of the day to take in this great race. 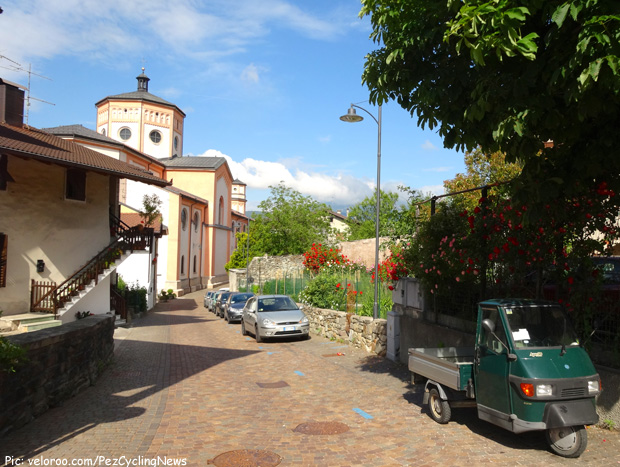 Levico-Terme is a very pretty village, being a town who trades on its spring water there are many picturesque gardens which compliment the Giro Pink nicely. We unload and get ready on the route through town where the Giro peloton will turn right and commence the climb. Already there are many cyclists here either rolling round the streets or getting their caffeine fix at the local cafés. 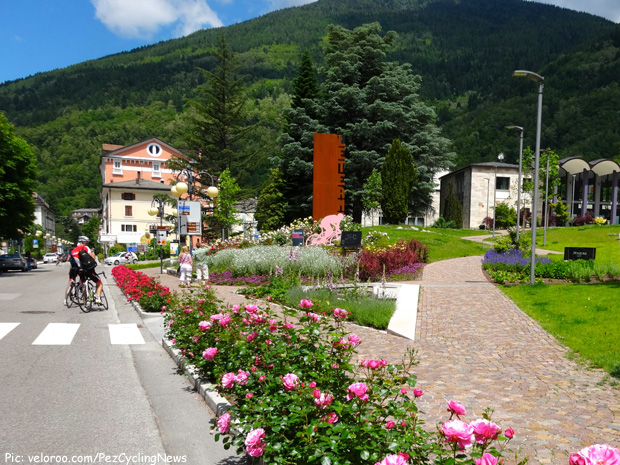 It is obvious that cycling in these parts is a passion. Old steel bikes, mountain bikes, flat bars and of course the latest styles are heavily represented on the climb. It is very rare to see a bike that is not well looked after and the riders are generally dressed in period if appropriate or they are proudly wearing their club colours. Most of the older guys sport Pantani–esque hair cuts. While it is still surprising to see so many riding without helmets relying on the security of a bandana or well worn cycling cap, it does add to the “continental” feel of being here. 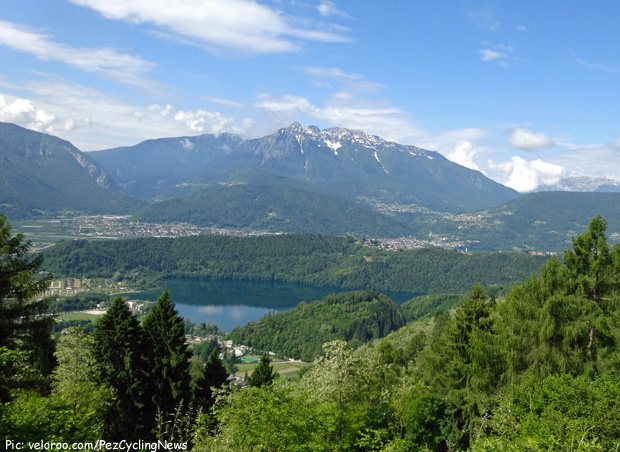 The first part of the climb is very scenic across meadows before entering the pine tree forest that stays with you until the last couple of hundred meters. With only occasional peeks of the outstanding views, you don’t really get a continuous perspective of how high you are climbing. Only that it is a lot, particularly as the steepest sections are also the longest straights. It is also obvious that the road has been recently resurfaced for the most part and while it is smooth, at the top the new tar was sticking to the tyres. This would not be welcomed by the peloton I thought and I wondered if it would play a part this afternoon. 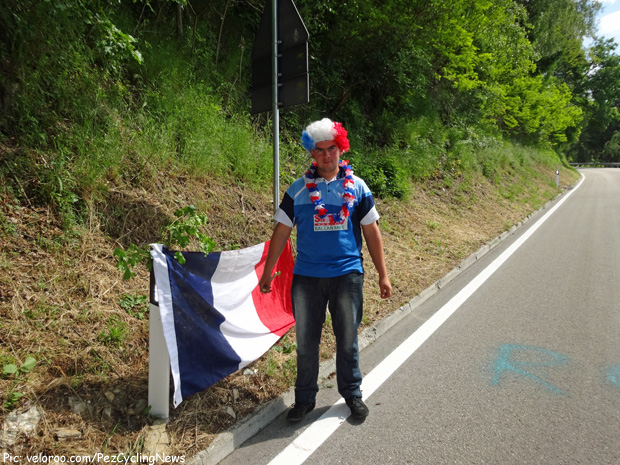 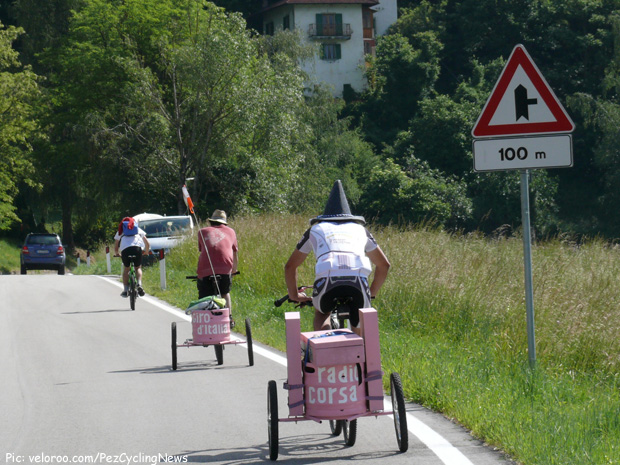 The last two stages were very empty regarding roadside crowds with the terrible weather but today was different. When the sun comes out and it coincides with a mountain stage the party crowd come out to play. The road had been closed early at about the 4 kilometer mark, but the further up you go the more you start to hear the crowd. BBQ Breakfast smells started to waft through the forest and the casual cyclists were getting cheered on. 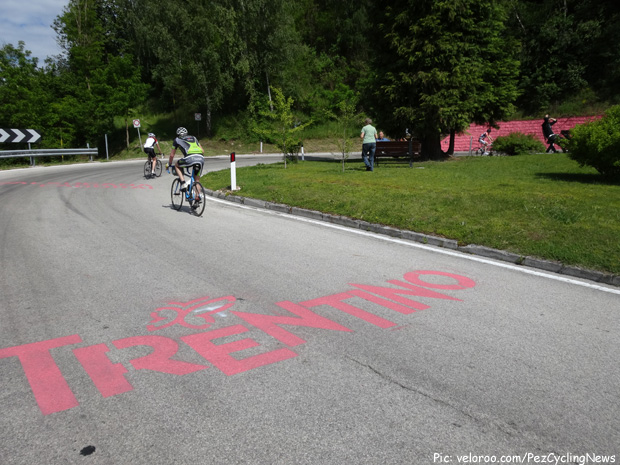 Even the local authorities got in on the act! 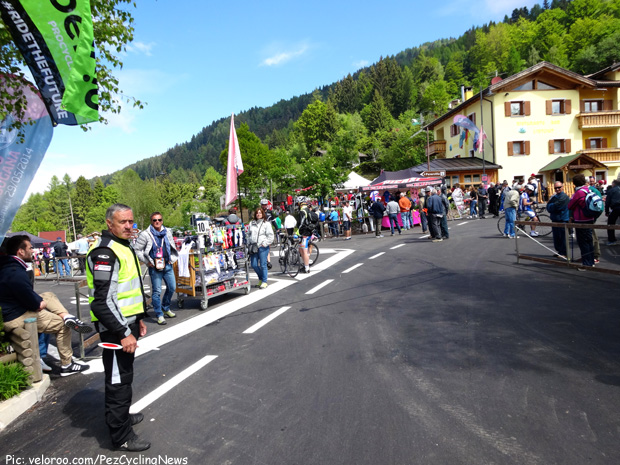 By the time PEZ arrived at Compet-Vetriolo Terme the crowds were massive, the bars were overflowing, bands were playing and food being cooked, it was hard to continue! What time did they get up here?? It was only around 9:30. 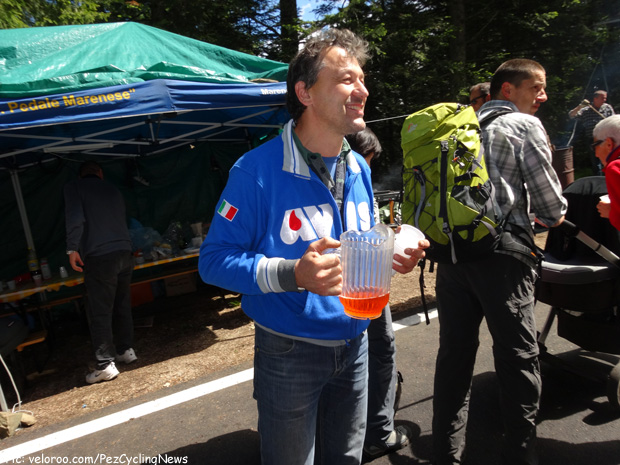 Like all good mountain stages the higher you go the crazier it gets. This guy was doing a roaring trade giving free wine to passing riders! 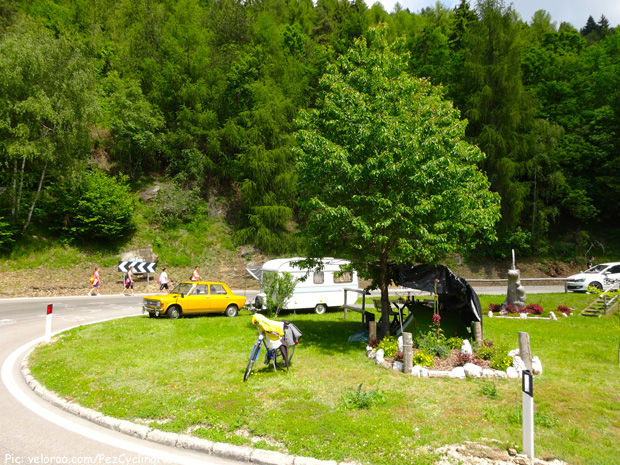 While others took to the simple way of celebrating. 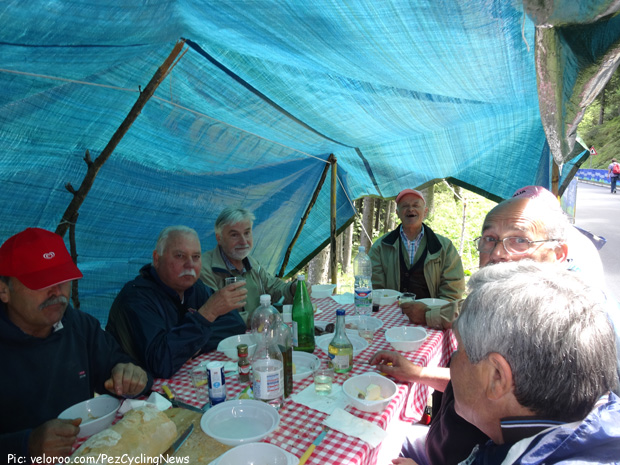 And this group of guys, who were 600 meters from the finish had a celebration that shouted good times, good friends and many laughs. If I understood them properly, they had all stayed on the mountain last night.

And then the summit and finish line arrived. I was completely astonished how many people were already there, given the time of day it was. Thankfully the rain stayed away for the most of the day, but with a couple of bars set up and a live band already playing, this was going to be a crazy day for a lot of people. What a fantastic atmosphere and a fitting celebration of the Giro. 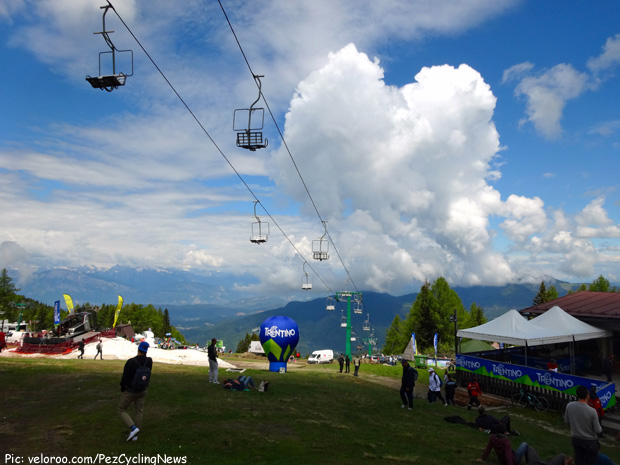 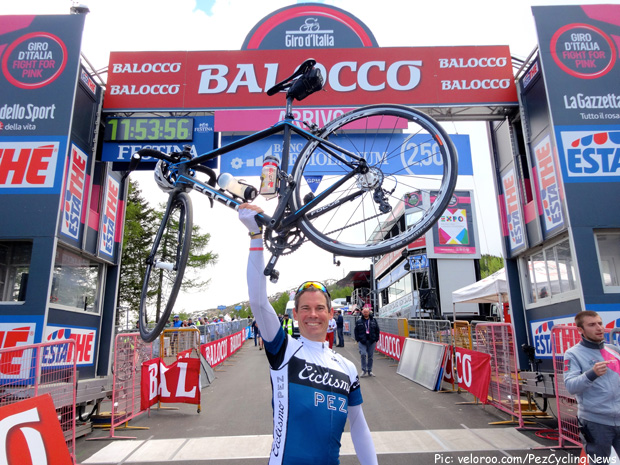 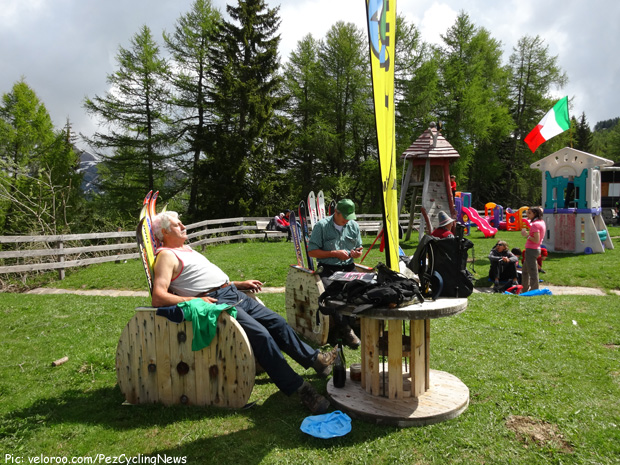 Descending from the summit, I passed what must have been another 1,000 riders heading up to stake their position. I had the plan to watch the peloton ride the 8.4% cobbled climb through the old town of Levico-Terme. There was so much buzz there this morning, I was looking forward to being a part of that too.

We grabbed our position, and the Peloton didn’t disappoint in whipping the crowd into a frenzy as they went through. It was interesting to take pictures of the gear ratio’s that the guys were using in relation to the speed they were going at. These guys truly are amazing athletes. 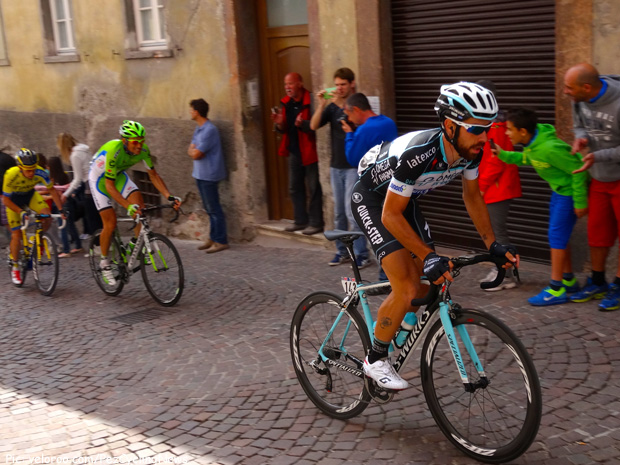 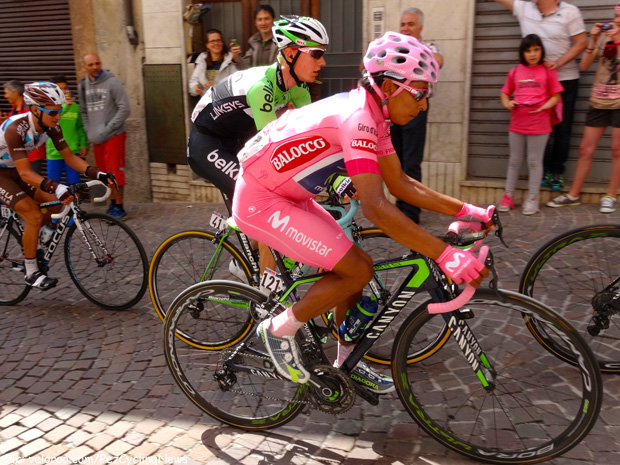 Nairo Quintana made it look all too easy, barely puffing as the gradient approached double digits 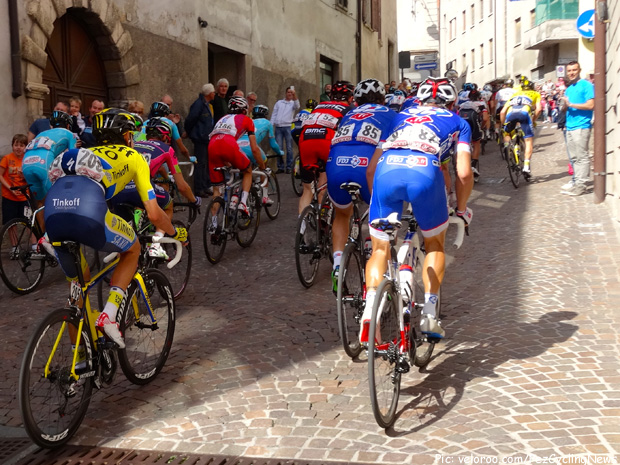 Tomorrow is the big mountain time trial and Julia and I will be there roadside again to cover all the action.