Giro di Pez: The Week After

The Giro and Italy are one and the same – beautiful, chaotic, colourful, dramatic, frenetic, simpatico, heroes, villains . . .
Always the contrasts. 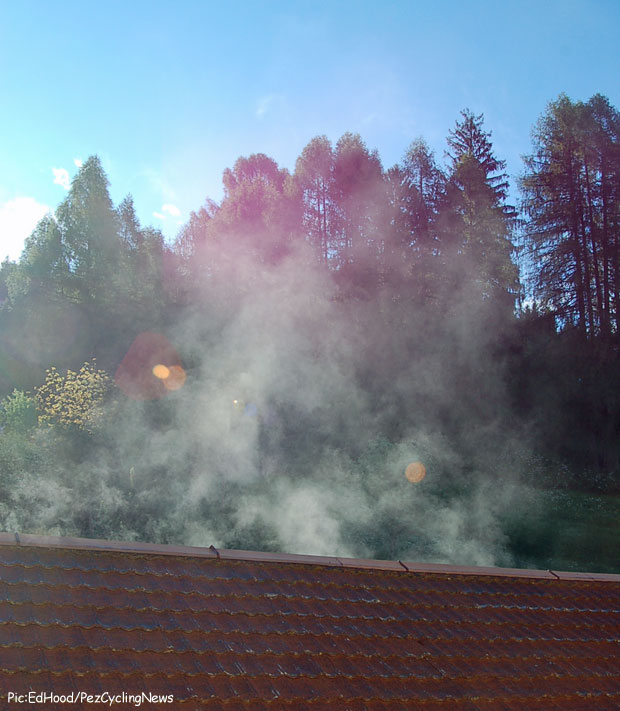 When we woke on Sunday – the day after the frozen madness of the Tre Cime – the sun was splitting the skies, the roofs were steaming in the spring sunshine and it was hard to imagine it was the same race, the same country. But that’s the Giro.

Our hotel for the Sunday night in Brescia was nice, clean, cosy and with good wi-fi. But by the time we’d finished work and ventured out in search of something to eat we were aware it wasn’t the ‘best side of town’ with all manner of dubious looking gentlemen inhabiting the street corners. But the restaurant we found was friendly, relaxed and the pasta was great. 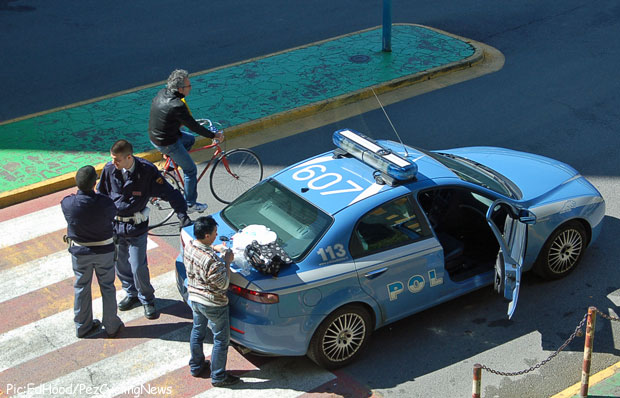 However, when we woke on Monday morning, our fears about the dudes on the streets were confirmed as the cops huckled (as we say in Scotland) a suspected bag snatcher – but all cities have their social problems. 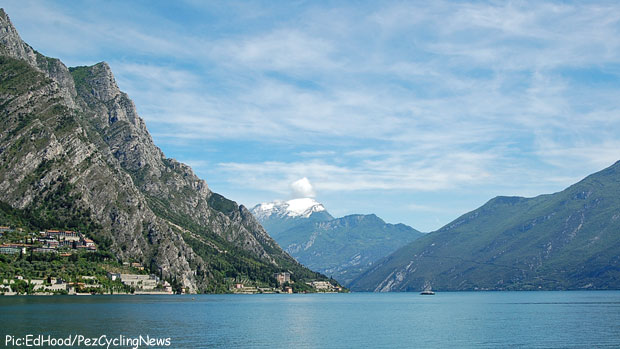 To ward off our Post Giro Stress Disorder we decided to head up to Lake Garda and soak up the sun and sights – quickly! 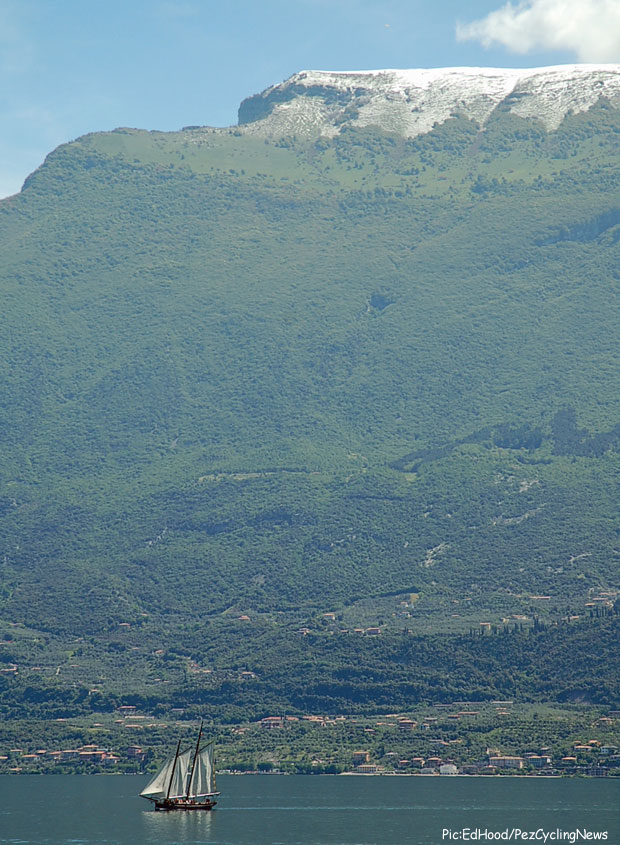 Within an hour of leaving Brescia we were cruising up the lakeside road in the wee Peugeot, whilst out on the lake the ‘beautiful people’ were trimming the sails – a million miles from the mean streets of Brescia. We said it on Sunday, after the race but we weren’t knocked out by the Brescia finishing circuit – it could have been anywhere. 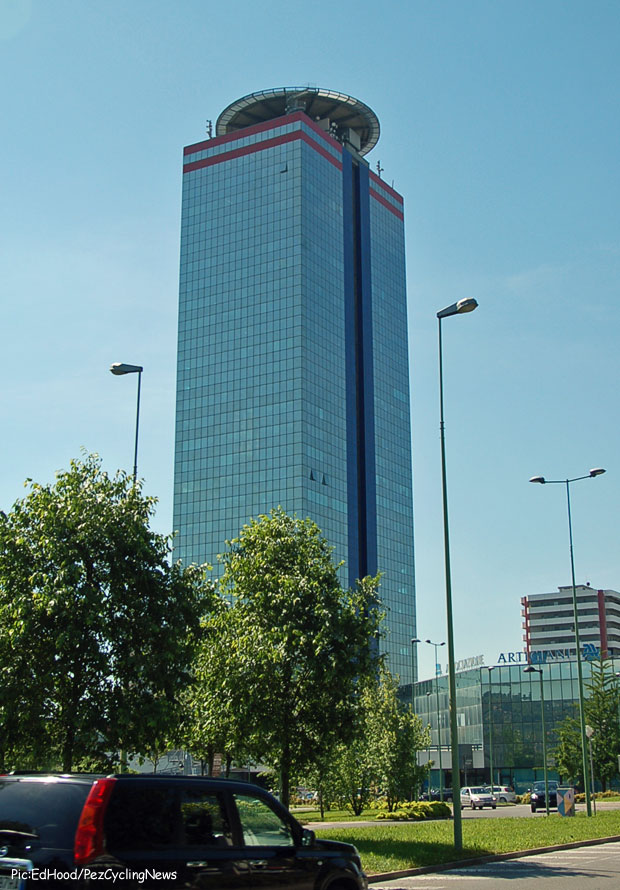 We just think that the city had more to display than long bland straights, it’s a bustling commercial centre with hi-tech company headquarters. 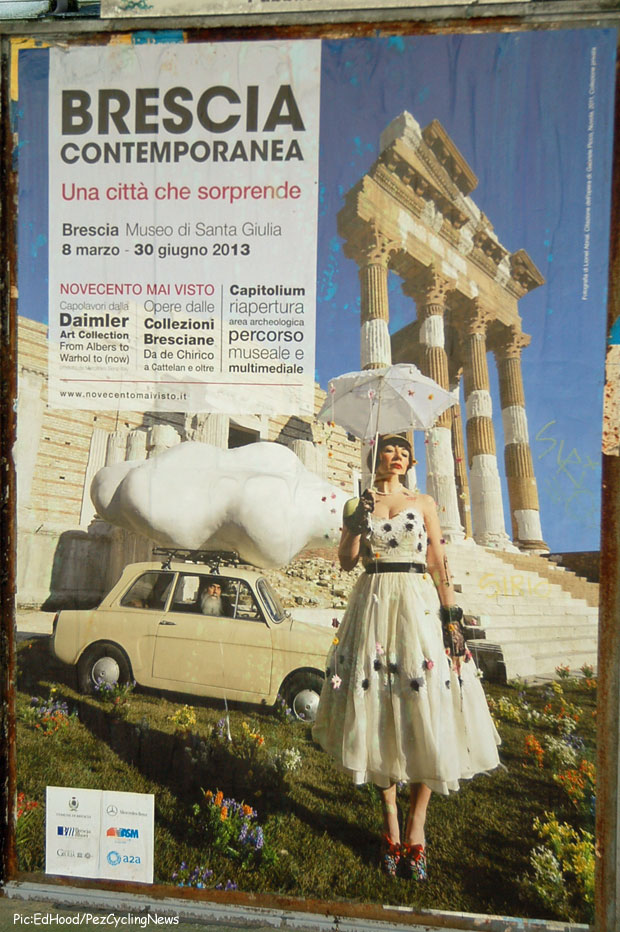 But also a city of the Arts – those contrasts didn’t come across on the soulless circuit. Paris has the Champs Elysees and Madrid the Paseo de la Castellana as their national tour’s ultimate destinations. Both are perfect venues for the climax of three weeks of the best sporting spectacle in the world – the Giro needs the same. 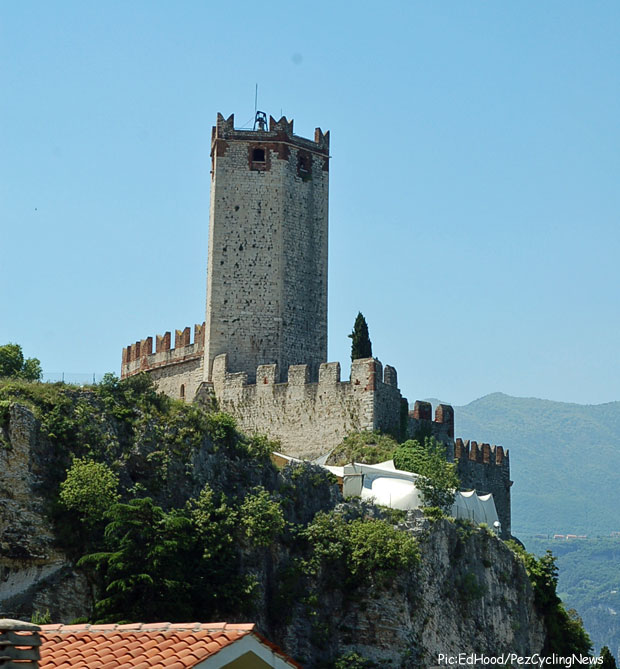 Lake Garda is beautiful, there’s history, stunning views and relaxed vibe where an afternoon at a roadside bar could just slide away from you. 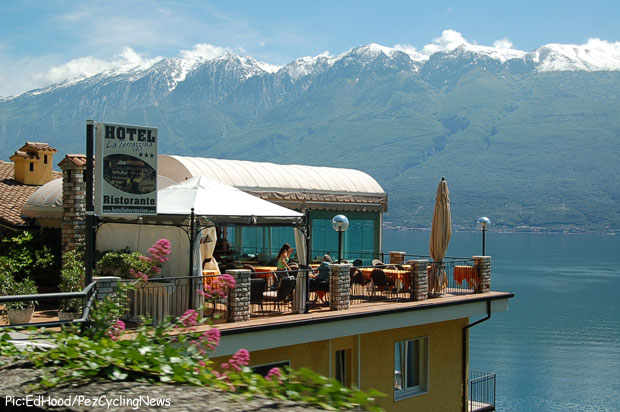 If you have the cash then you can find a restaurant with fabulous out looks. 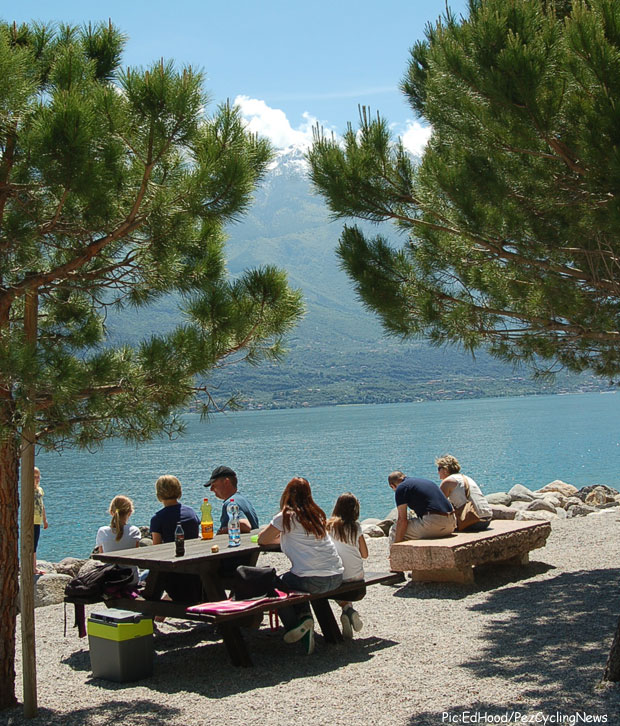 But if you don’t then it’s just as cool to picnic by the lake – although you will have to pay to park the car. As we drove, we chatted about the race and the protagonists. 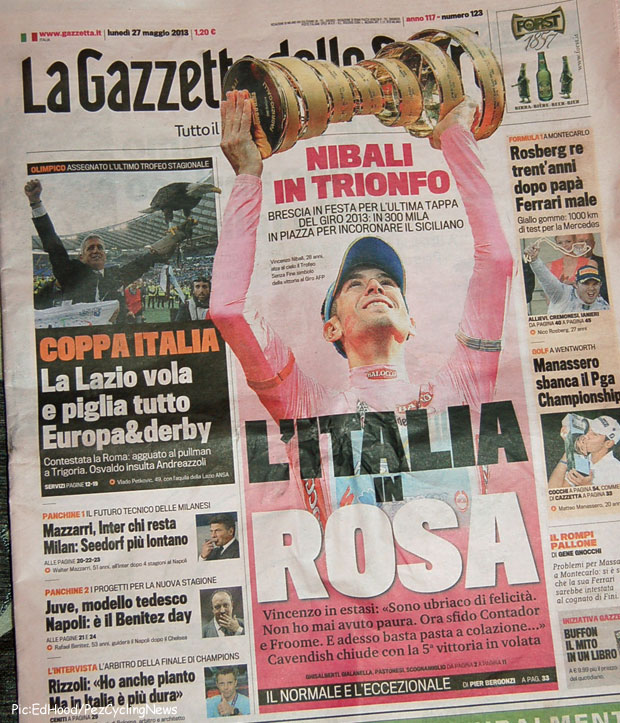 Those who said that Nibali was good, professional but uninspired have been forced to change their tune. He measured every effort until near the end when he cut loose with two stunning displays. All of the Grand Tour greats have been top time trial riders; any doubts about his ability as a ‘chrono man’ were dispelled as he stuck a minute into the field on the 20 kilometres up to Polsa in the Stage 18 chronoscalata.

And on Stage 20 through the blizzard to the Tre Cime he displayed class and grinta that mark him as a potential member of that exclusive club of men who have won the Vuelta, Giro and Tour. The Giro will be the poorer without him in 2014; but le Tour is a Siren whose call upon riders, sponsors and fans is impossible to ignore. 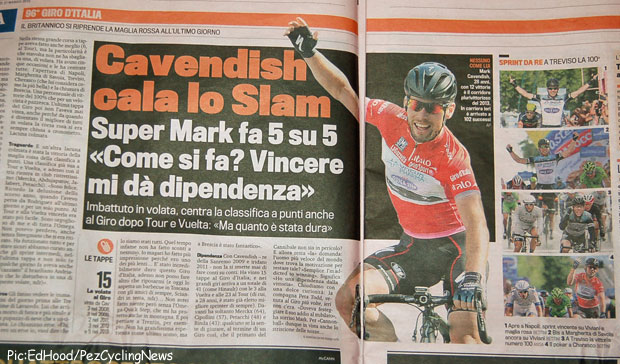 Before the Giro, the doubters were telling us that the QuickStep train hadn’t gelled and that there was no way that Cav would be with the team in 2014 (although that may well yet come to pass if Uran joins Lefevre’s Legion). A facet of the rough diamond that is Mark Cavendish which is often ignored is his ability as a motivator – if he’s given the freedom he knows exactly how to forge a bunch of riders into a committed band of disciples who’ll ride themselves into the ground for him. Five stages and the maglia rossa – enough said.

Another disappointment to the ‘nae sayers’ is that the future of Italian cycling looks extremely bright. Sacha Modolo (Bardiani) and Elia Viviani (Cannondale) are both quality riders but perhaps too well established now to be classed as ‘up and coming.’ But Enrico Battaglin’s (Bardiani) Stage Four win and the aggression displayed by young Italians bodes very well for the future. Not to mention the likes of Eroica winner Moreno Moser (Cannondale) – felt to be too young for the savageries of the Giro; and Lampre’s Diego Ullisi with nine wins to his name, already. 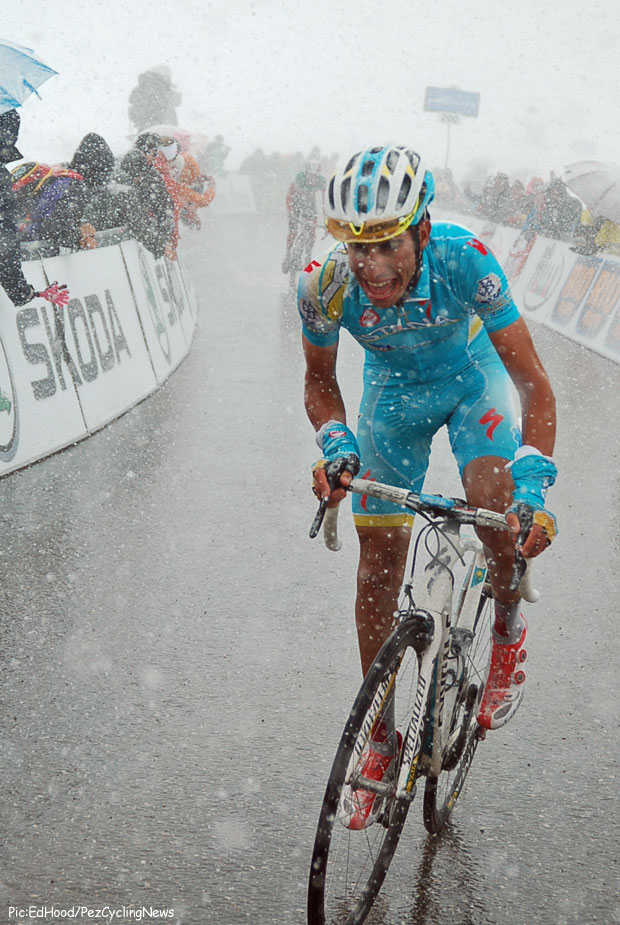 But the man ‘most likely to’ for us is pictured above; former Baby Giro winner and current Nibali team mate, Fabio Aru, he was very impressive on the Tre Cime and is still only 22 years-old. 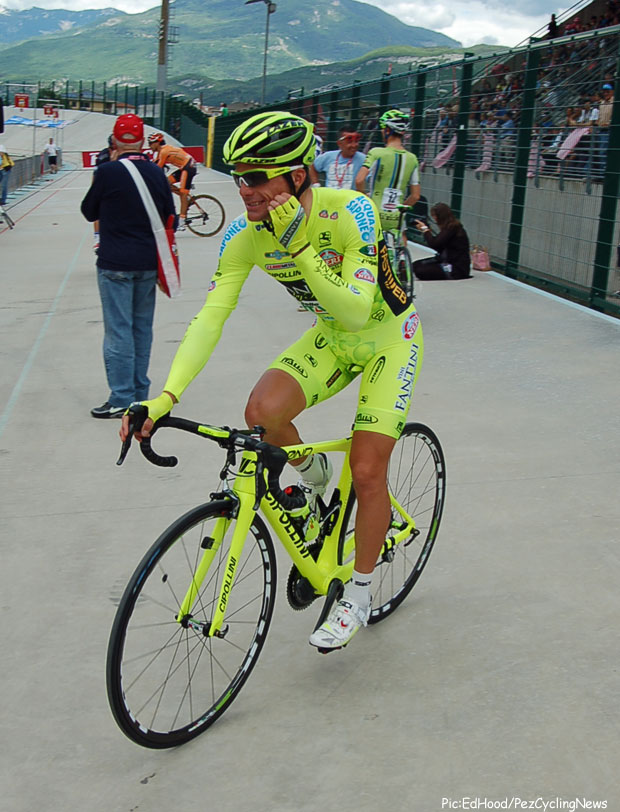 But there was an ‘elephant in the room’ in the shape of Danilo Di Luca (Vini Fantini) – but what was positive (no pun intended) about the affair was the outrage it generated. There were few of the shrugs of the shoulders we used to get in these situations. There have been all sorts of adjectives used to describe Di Luca; but perhaps Vincenzo Nibali summed it up best; ‘it’s a human problem.’ Maybe it’s because he can’t live without the cheers of the Tifosi on the climbs and hasn’t realised that not, ‘everyone is taking something’ anymore? And whilst I think he’s more to be pitied than pilloried, the powers that be have to ensure he never pins on another number.

But Di Luca apart it was a great race with an quality winner, terrific battles all the way to the end – and it’s simply impossible not to love Italia. If God spares me and Mr. Pez is happy to let me loose on my ninth Giro, I’ll certainly be there in 2014.

Quest for glory in the Critérium du Dauphiné

The numbers behind the scenes for LAMPRE-MERIDA