Roadside: The Giro’s Grande Partenza was more than just a bike race swishing past. For Northern Ireland, it was a game changer, a chance to advertise a different side of a country. For Belfast especially, its reputation is like the scar-tissue covered legs of a crash-prone racer. Not pretty …

For the stage through to Dublin, it was an easier job for one of the most popular tourist destinations in Europe. Dublin doesn’t really have to sell itself. 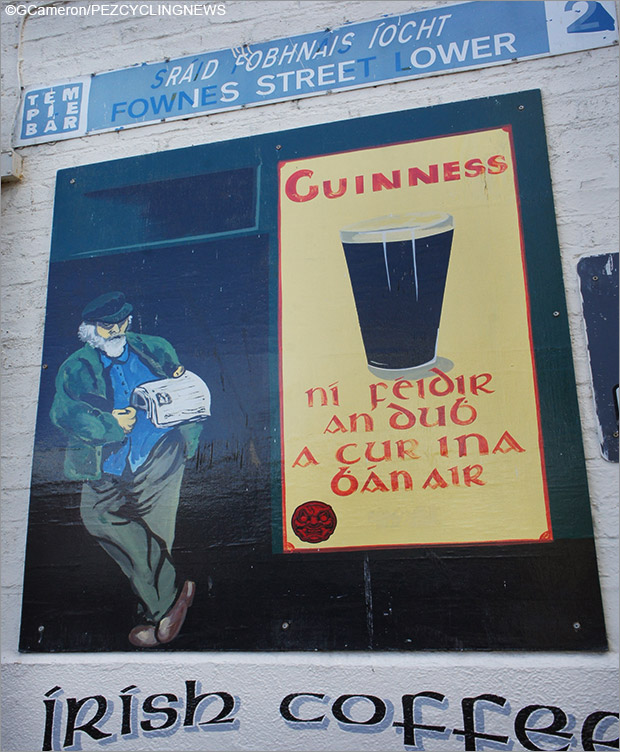 So, what better, if unscientific, way to gauge how the two cities felt about the Giro’s arrival than to go and visit pubs and cafés?

Belfast. The usual grumbles can be heard: “I’m not getting anything from it so why bother?” “It’s too expensive.” “The roads are shut, how will I get to work?” Minor inconveniences for a long weekend that could bring long-term multi-million pound benefit? I even heard a schoolboy complaining about the Giro announcer’s pronunciation: “There’s no ‘o’ in Belfast!” 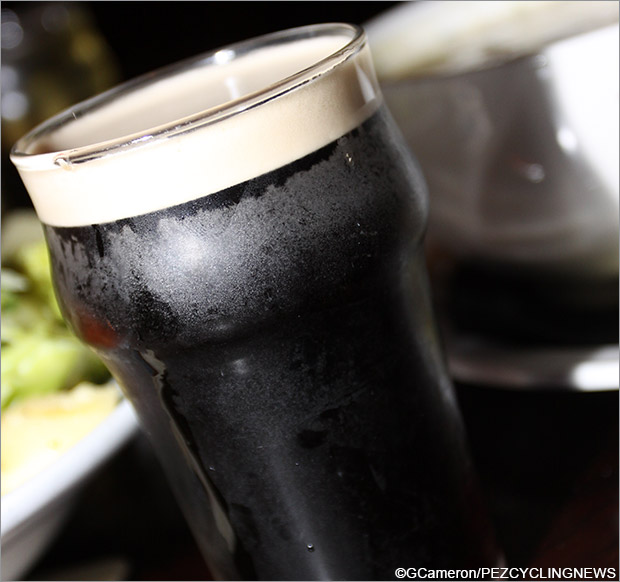 I remember watching the bad times on the television news, communities seemingly at each others’ throats all the time. Backstage at the teams’ presentation, despite another fierce war of words over the recent arrest of Gerry Adams, I saw Peter Robinson and his deputy Martin McGuinness shake hands with Nicolas Roche, a young symbol of Europeanism. It was a photo-op that would have seemed unthinkable when I was a kid looking on from across the water.

It is not all perfect of course. In preparing for the Giro’s arrival, the authorities have taken flak for ‘covering up’ some of the derelict buildings in and around the Newtonards Road, which leads out to Stormont, the seat of government in Northern Ireland. New façades had been erected (it’s claimed) to hide the fact that not all areas of Belfast are as economically developed as others. So people ask: why not invest properly instead of putting in a temporary, surface fix? 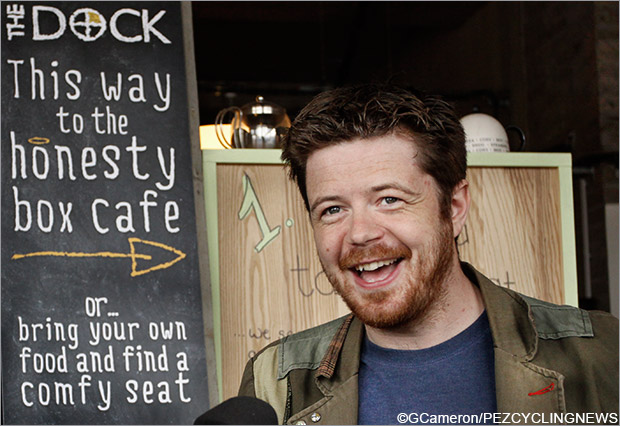 One part of Belfast that has had a cash injection is the Titanic Quarter and the area around the River Lagan’s east bank. This is the heart of what was the shipbuilding district, where thousands labored on the Titanic among other ships. The Harland and Wolff cranes, Samson and Goliath, still tower into the sky.

Reverend Chris Bennett oversees the Dock Café in Belfast’s Titanic Quarter. This is a brand new venture which symbolises a collaboration between communities for the community. And everything that people drink out of, or sit in, has a story.

“Every mug is fabulous but none of them match! Every chair, every table … I can tell you who’s granny gave us that sofa or who was changing round their dining room and gave that table and chairs. Everything has been donated, and the honesty box ethos isn’t just how you pay for your coffee. It’s in the whole café. People give what they can to support this space and their local community.” 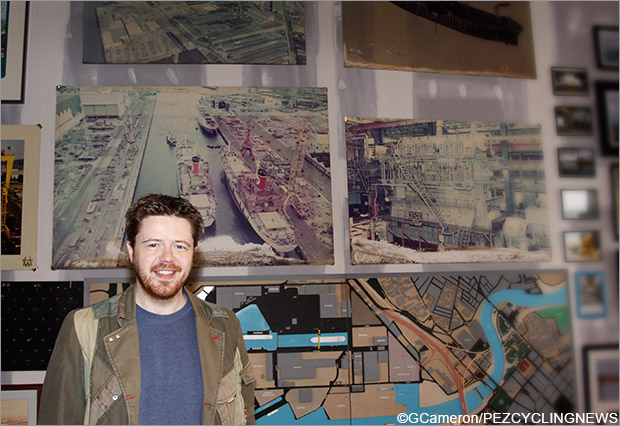 “We’re passionate about good news for Belfast. This is the shape of the city that we’ve been dreaming of and hoping for the last couple of decades … this feels like the chance to start again, because this [the Titanic Quarter] was just wasteland ten years ago.” 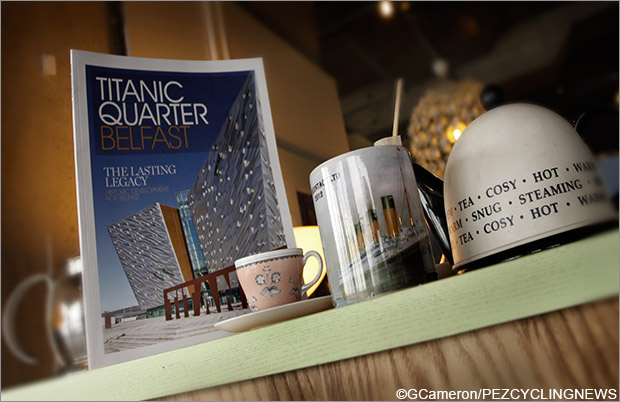 “This is a brand new community that we’re building together. This café is actually run by the churches working together, Catholic and Protestant, and that’s the global image of Belfast … where Catholics and Protestants are throwing bricks at each other but here we are serving coffees together and the chance to live that out is so exciting for us.” 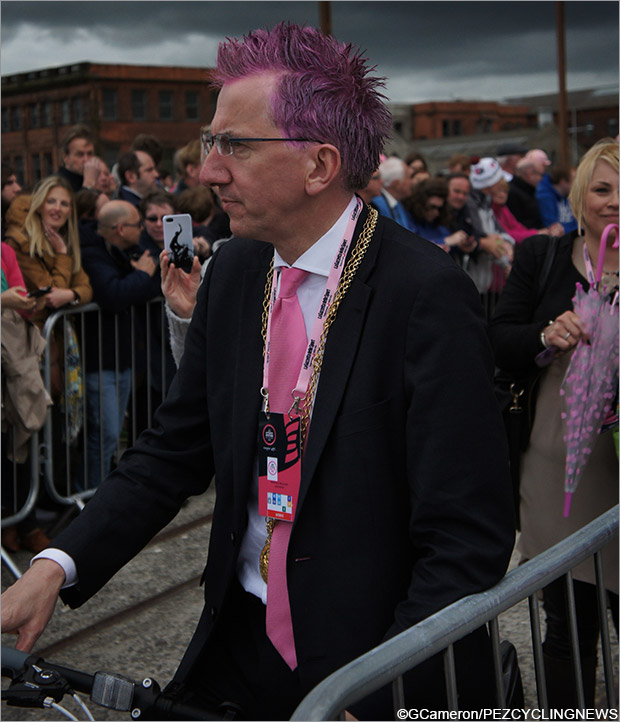 The leader of the Orange Order (protestant, unionist, monarchist) has jumped on a pink bike, the Mayor of Belfast dyed his hair the Giro color. There is little evidence of the symbolic danger of color where the Giro is concerned. There seems to have been a meeting of minds in getting behind the race’s visit. 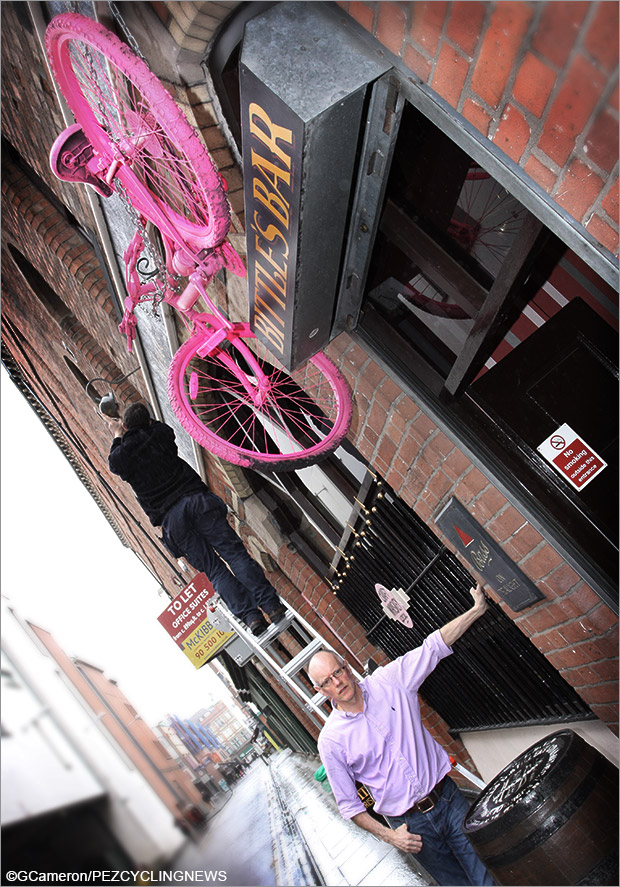 We wander into the historic Bittles Bar on Upper Church Lane, an odd-shaped triangular building dating from 1861. John Bittles, the owner, has been in the trade for nearly 40 years, and owner here for a quarter-century, but he said he hadn’t seen such support for an event before in Belfast. Everyone’s getting involved.

“The whole town’s gone pink … it’s amazing to see how many people have bought into this event. Everybody has gone out and made a special effort. People who come to Belfast are surprised at how quiet a city it is, how you can walk about freely. There’s very little crime in Belfast. I’m here in a small pub in the city center and I manage to run it myself. In 25 years I’ve had very little trouble.” 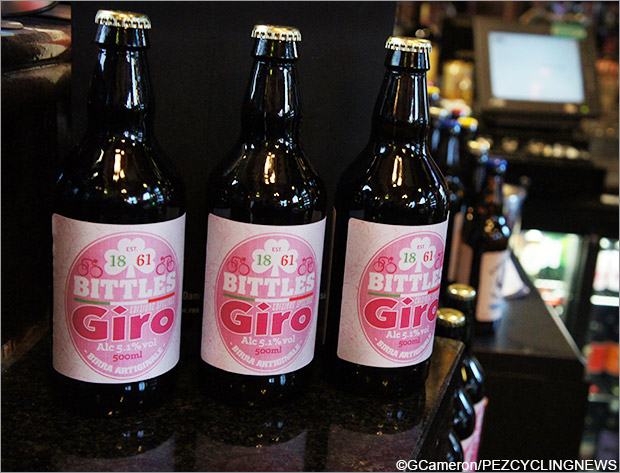 John’s been running a special, limited edition Giro themed beer (Birra Artiginale), created by a micro brewery out in Greyabbey. He tested it out a couple of weeks ago, but had to pull it after a couple of days because it went down so well he wouldn’t have enough left for the race. 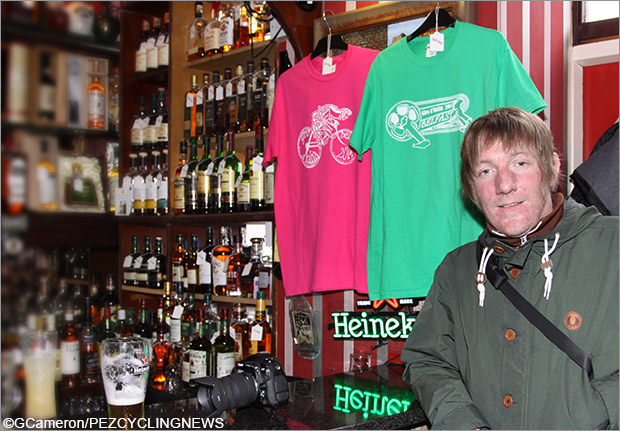 Hanging out in the bar and chatting to Valerie is photographer Chris Samson, who rattles through a concise dissection of Belfast’s socio-economic DNA and why some parts of the city are questioning the TTT course lay-out that’s so comprehensive he really should be presenting TV documentaries on the subject.

“There was a bit of … unhappiness about the Team Time Trial predominantly featuring East Belfast. That was the heart of the shipbuilding industry. City center people tend to have a different outlook from people that live in isolated areas. People who spend time in the city think it’s a fantastic opportunity.

Other people may not have so much of a positive attitude because it’s not going to positively impact their particular area. It’s going to be great for East Belfast, a lot of the cafés and the shops. It’s going to have people out on the streets.”

“Of course,” says Chris, “you should really be speaking to him.” ‘Him’ turns out to be Henry McDonald, Guardian newspaper correspondent for Northern Ireland, who discreetly places his arm over his front page story in that day’s paper about the Grande Partenza.

Henry told me: “[20 or 25 years ago] It certainly would have been very difficult to persuade people to come. Something as big as the Giro d’ Italia, it certainly is a sign of the times.” 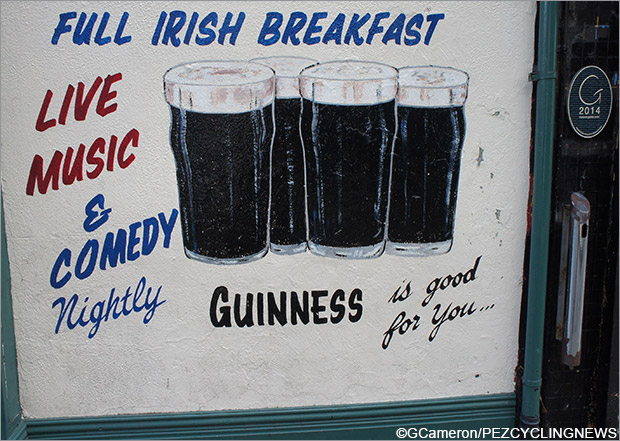 Dublin: By the time we got to Dublin on the Sunday, there seemed to be significantly less of a Giro impact. But the city is still a charming one. 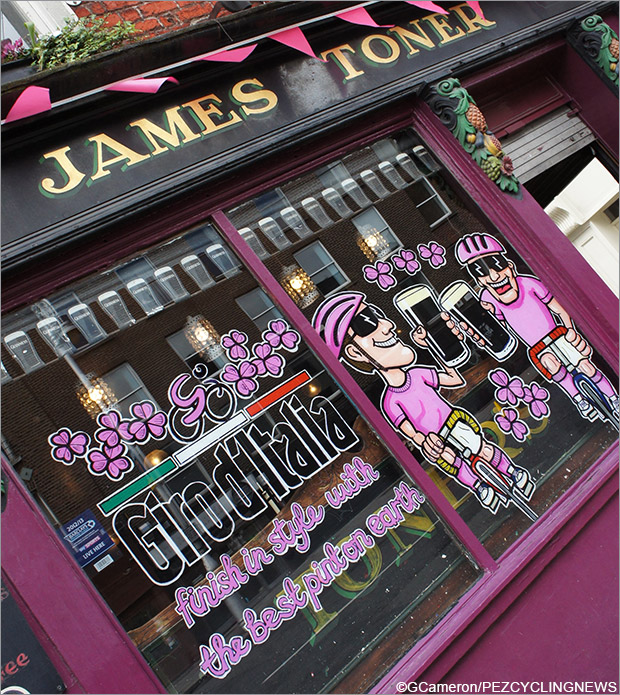 There were a few pink flags out when we walked down from Drumcondra to Merrion Square and the stage finish. I thought it was a good start but it turned out to be for the Dublin Pride event in June! We popped into the first tourist information booth … not a clue about the Giro. Hardly any effort in shop windows. Nothing like Belfast. Maybe Dublin doesn’t have as much at stake? 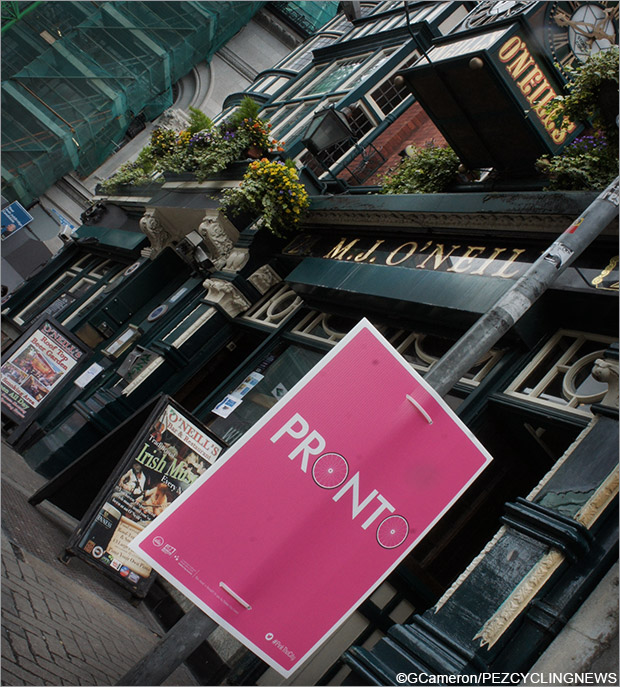 We get directed to O’Neills on Suffolk Street, one of the oldest pubs in the city which began trading over 300 years ago. The building is on the site of a Viking parliament mound and the building is so old, it pre-dates the street. 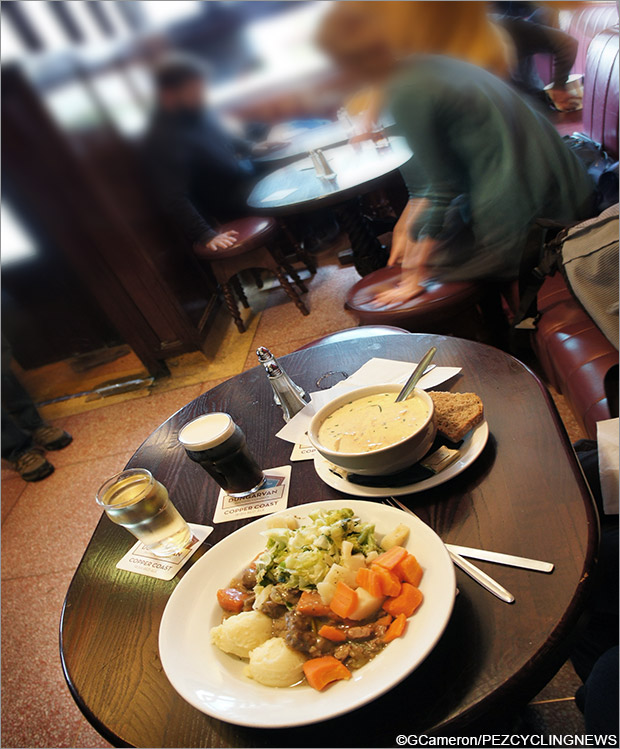 As tourists for the day, it would have been rude not to try the Irish stew (obviously) and the Guiness (obviously) as well as the local cider (obviously). But what about the Giro, due to roll in just hours later? 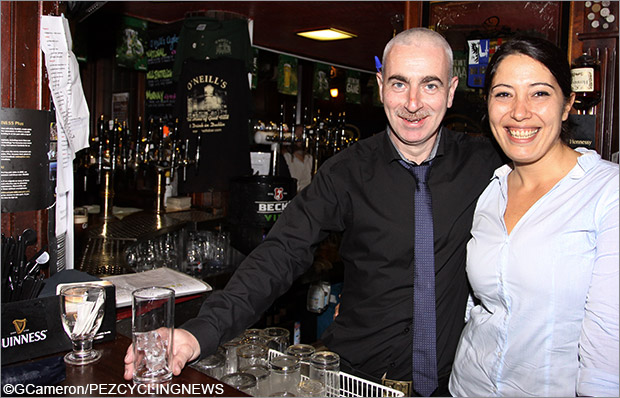 The assistant manager of O’Neills is Althea, from Ancona in Italy. She knew all about the Giro. “Back home, all the boys want to be at home especially on Saturday and Sunday to watch the Giro. All day!” 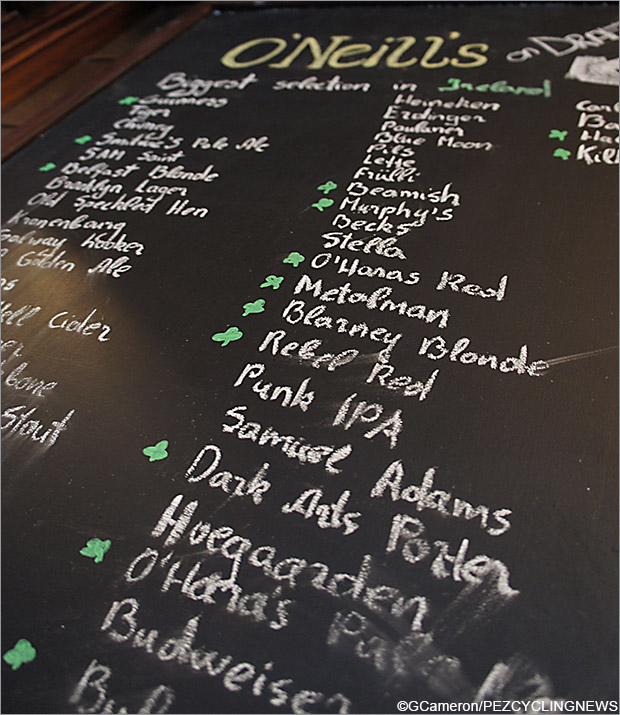 She’s been in Dublin for five years, and working in O’Neills for 18 months. She’s one of thousands of Italians and Spaniards over here, as well as lots of South Americans, who’ve come to seek their fortunes when things got bad at home. 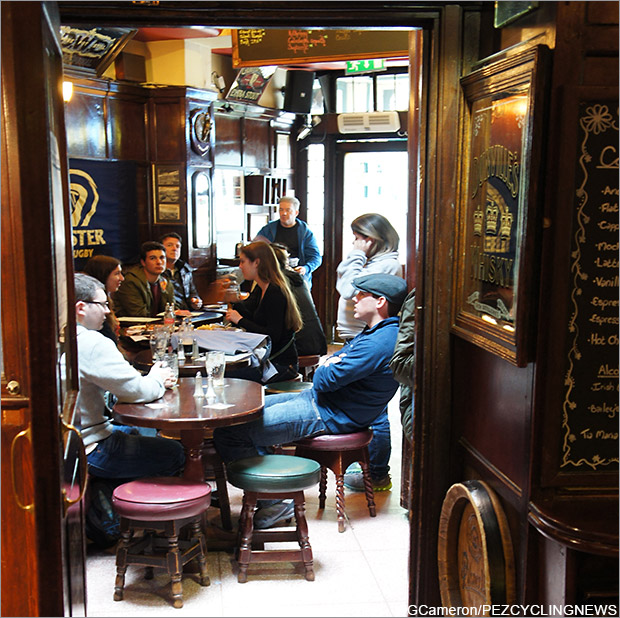 O’Neills is labyrinthine, with little alcoves and hideaways tucked here and there, and multiple screens for showing sport. The day we were there it was soccer, soccer, soccer. Lots of punters in to watch the end of the English Premiership season.

We were looking for two-wheeled action, so it was back out onto the streets to see the Giro home. Between the morning’s lack of action and the hour before the race arrived, Dublin’s fans had come out in full force. Loads of great people, two pubs, a cool café … and one Giro. There’s only one Giro.

Clarke second in opening stage of Tour of Iran