Analysis St.6: “The stage has been so boring,” said Mr. Sean Kelly with 35km to go of Stage 6 of the 2014 Giro d’Italia. And then all hell broke loose just before the start of the 10km climb, as yet again serious crashes wreaked havoc on the road to the summit of Montecassino.

Several riders limped home with skin and lycra tattered in what looked like equal measure, with one, Giampaolo Caruso of Katusha spending a long time on the tarmac before he was taken to hospital with his right femur broken in three places. He’s headed to Rome for surgery. His team leader and former Giro second place finisher Joaquim Rodriguez of Katusha came in way down at almost 8 minutes back after the crash, which x-rays later discovered fractured ribs and thumb – ending his Giro. 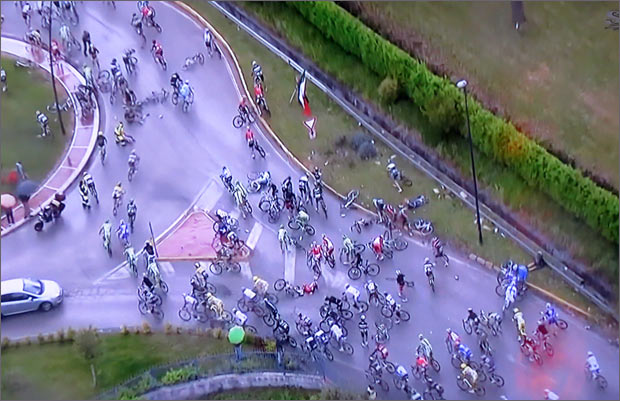 Their races are literally over but for others with high hopes of doing well on the GC, theirs is practically done too.

Michele Scarponi limped in 1:37 down after coming down on a descent, and Ireland’s Nicholas Roche dragged himself over the line over 15 minutes down.

On the live commentary on Eurosport there was a flurry of comments coming on via Twitter to Kelly and his co-host about whether or not BMC Racing’s Cadel Evand and Daniel Oss were justified in attacking after the crash, with those suggesting that they shouldn’t have showing a clear misunderstanding of the basic nature of bike racing.

There’s no way that Evans and the other riders who went with him could have known just how serious or not the crash behind them was. There was no conflict with the unwritten rule of not attacking the race leader either, as Michael Matthews was with them, and this was not a case of a single rider having a mechanical.

“I can’t comment on another team but I know that we [Orica-GreenEdge] definitely didn’t ride, nobody wants to see crashes like that, and when it happens in that situation… everybody has their own plan,” said Matthews at the end, which seemed, despite his best intentions, to be a comment on ‘another’ team.

When there is a crash of magnitude in the pack however it is often very difficult to know exactly who has gone down and who is stuck behind and still upright, as it is to ascertain the severity of the injuries of any particular rider.

When the break pushed ahead the race was already very much on and there was no issue, in my mind and I think in the minds of most racers, of there being anything untoward in the leading group’s actions. 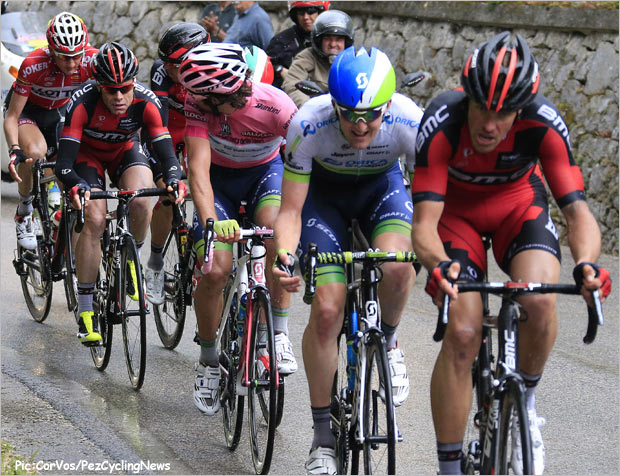 One element of the finish that I did think was (at best) ungracious was Michael Matthew’s celebration after he took the win. It looked on camera as though Evans had a word to the race leader just after that, though Matthews, during his press conference, denied that any words were exchanged.

I can’t imagine Evans, had the roles been reversed, celebrating in such a manner after his opponent’s teammate had just dragged the break up the hill. That said, with 10 seconds on offer for the win. Evans might have been better to sit in towards the end and then go for the line.

Make no doubt, the elder statesmen is looking good out there, though the same is true of Matthews. The 23 year old former U23 World Champion looks to be in great shape and if he can hold his nerve through to the high mountains then he’s in with a great chance, at least for podium.

The big stuff comes in the last week of this Giro which seems to be the reason the 2014 edition was heralded as “a more humane Giro,” but in truth the first 6 days have lacked a bit of the razzmatazz of recent Giros. Let’s out it this way, if Sean Kelly is getting bored then you know something is not quite right…

One thing about the Giro that seems askew every year I see it is the presence of private cars parked on the actual roadside. Exactly why the first crash on the approach to the climb happened is still not quite clear, but there were plenty of vehicles along the left hand side of the tarmac, something you never see in the Tour de France.

When asked at the end why he thought there so many crashes in cycling these days, Matthews had no answer but I’d venture a guess that one factor is the reduction in rampant doping in the peloton. More guys are more equal and the result is more guys going for the win and less teams able to stick 4 or more guys on the front at the business end of the races. 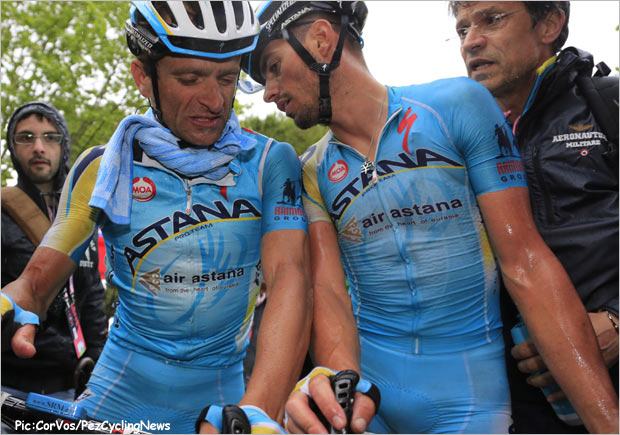 Michele Scarponi was another team leader losing time after the crash.

Either that, or modern bike riders can’t ride in a straight line. If anyone else has any suggestions please send them in.

So, the race for Pink might be down to two Australians, and if that’s ever happened before in a Grand Tour I certainly cannot remember it. It’s the new generation versus the elder. Evans has a climbing partner in Daniel Oss, the same man who drove the break today, whilst Matthews might not have the same support in the high mountains.

Does he have a big enough lead to maintain his position over Evans in the time trial coming up? We’ll have to wait and see.

I have a feeling that, whatever happens, that stage is going to be anything but humane.

Competitive Cyclists from Around the World to Participate in Sunday’s