Snow, lots of snow; nice if you’re into skiing but not so nice if you’re running a stage race over mountain passes at 2,000+ meters and the snow line is 1,500 meters.

And not so nice if you’re a journo with copy to file for Giro frenzying readers – cue frantic phone calls for interesting chaps to talk to. George Luchinger the Media man at BMC came up trumps for us with a ‘double act’ interview with Cadel Evan’s loyal lieutenants, Adam Blythe and Steve Cummings.

Yorkshire rider Adam Blythe first grabbed the big headlines when he won two stages and the GC in the 2010 Circuit Franco-Belge; a UCI 2.1 stage race with a history stretching back to 1924. He became one of the youngest-ever winners in the event, beating Sep Vanmarcke (Topsport Vlaanderen) by six seconds and Jakob Fuglsang (Saxo Bank) by seven.

The superb victory came towards the end of his first full pro season with the Omega Pharma Lotto team, which initially signed him as a stagiare in 2009 after a successful Belgian amateur career.

Their interest in the then Konica Minolta rider was due to a string of top placings in Belgium plus a win in stage seven of the Thuringen Rundfahrt in Germany.

During the 2010 season he settled in well. He was fifth on a stage during his Giro debut, and had strong placings in races like the GP Fourmies (4th) and Omloop van het Houtland (3rd) indicated that the Sheffield man was rapidly finding his feet.

But it was his Franco-Belge triumph which confirmed his arrival at the highest level. Notably, his first stage win was achieved the day before his 21st birthday. And to prove the wins were no flash in the pan, he also won the UCi 1.1 Nationale Sluitingrijs that year.

In his second season with Lotto there was a string of placings – second on a stage of the Franco-Belge and third on GC in the Ronde van Drenthe and third at Houtem; but no wins. 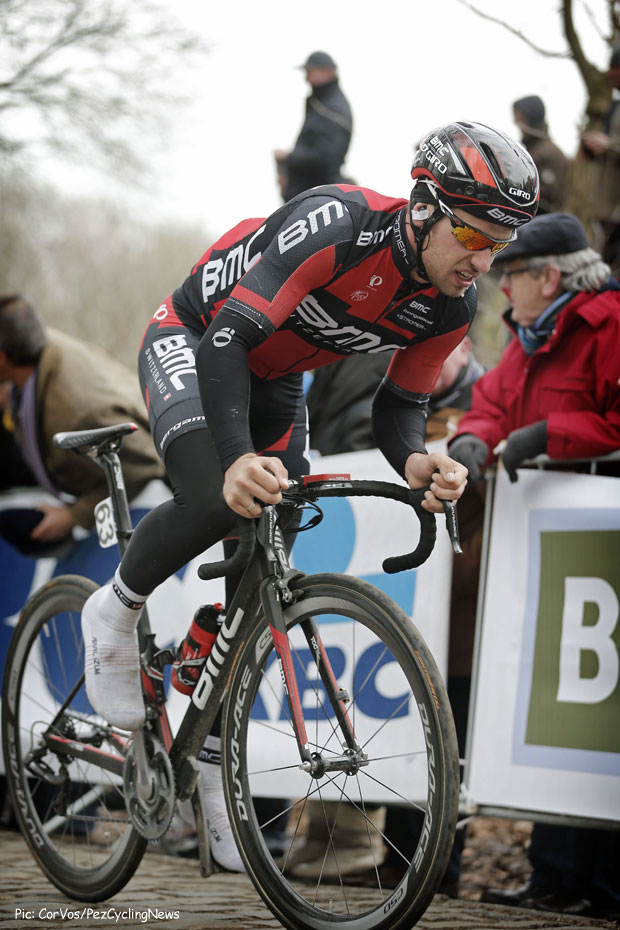 Moving to ‘super team,’ BMC for 2012 he scored two wins – stage one of Paris-Correze and the UCi 1.1 Memorial Vandenbroucke, Binche-Tournai-Binche as well as a string of top placings such as second in the 1.1 Omloop van het Houtland to Marcel Kittel and third in the 1.1 Handzame Classic to Francesco Chicchi.

And Steve Cummings is a rider whose palmares and strength are often over-looked, perhaps because he’s from the old, ‘let the pedals do the talking’ school.

A World and Commonwealth champion in the team pursuit, he’s also has an Olympic silver in the discipline. On the road he’s won an Italian semi-classic – The Coppa Bernocchi – and stood on the podium of the national tours of Britain and Denmark.

He’s ridden as a ‘super domestique’ in the service of Alberto Contador during his Discovery days and was one of the key men in Mark Cavendish’s Copenhagen triumph in 2011.

Despite the fact that he rides for ‘super squadra’ BMC Racing, was two seasons with Sky and one with Discovery, his pro career hasn’t all been luxury coaches and electronic gears – he rode two seasons with low budget, no nonsense Belgian team Landbouwkrediet-Colnago and two with cosmopolitan Pro Continental team Barloworld.

His dues are fully paid. 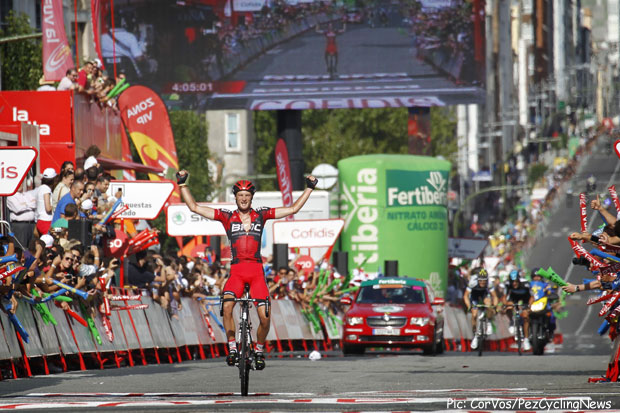 We sat down with the pair at the team hotel near Laces and began to fire the questions:

PEZ: One for you Adam, how did you come out of the Six Day Nights of Zurich in the winter?

Adam Blythe: Tired! It was all right but harder than I expected – but if the team wants me to ride it this winter, then I will.

PEZ: How well prepared were you for this Giro?

Steve Cummings: I only found out I was riding, half way through the Tour of Catalonia. I didn’t really have time to change anything; I’ve not had the best start to my season, I think perhaps I’ve raced too much.

Adam Blythe: I found out two weeks before so there wasn’t a whole lot of special preparation I could do. I was going well enough coming in to the race – not like I was going poorly, or anything. 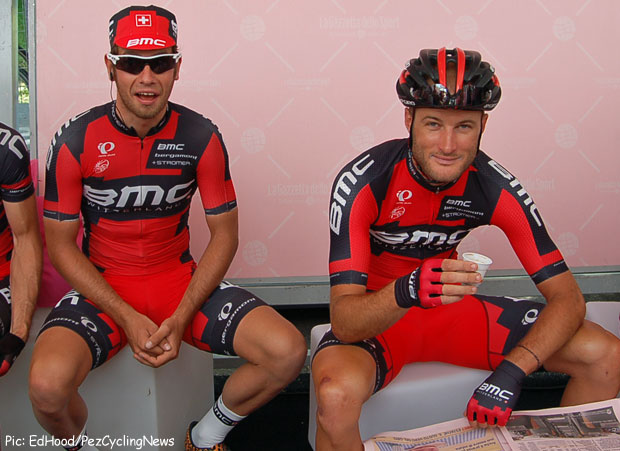 PEZ: Has Cadel surprised you with how well he’s going?

AB: I didn’t think he’d go so well, I thought maybe top ten as preparation for the Tour.

SC: No, I thought he’d be there or thereabouts.

PEZ: Has his strong riding changed your roles in the race?

AB: It’s changed as the race progressed – Cadel has proved his form more and more as the race has gone on.

SC: Yeah, there’s been more and more emphasis on Cadel as the race has gone on; in the last three kilometres it’s not been about setting Adam up for the sprint, it’s been about keeping Cadel out of trouble.

PEZ: What have been your toughest stages?

AB: Stage ten, the one after Florence and the first rest day, I had problems with my breathing from the start – I’d had hay fever and was on antibiotics. I was dropped after three K, got back was dropped again and spent the whole day chasing alone or in gruppettos.

SC: The stage after the second rest day when we went down the Telegraphe; I was hanging on all day – maybe my legs were blocked after the rest day? I’d ridden up the climb on the rest day at a good pace to keep my system from shutting down but I really struggled the next day.

PEZ: Dave thinks you guys are as skinny going in to Grand Tours as you used to be coming out of them – does that lower your resistance?

AB: I think on this Giro everyone has been a bit sick – it’s just infections doing the rounds. But on the stages when it’s pissed down all day I do find I feel the cold because I’m skinnier than I used to be.

SC: I think if it’s properly managed and you take proper care of yourself, it shouldn’t be a problem.

PEZ: How did you approach the mountain time trial?

SC: I’ve been struggling with my breathing due to allergies on the sunny stages – it must be pollen – I decided I’d go full gas if it was wet but I was actually going OK despite the sun being out for the early starters. I was looking at my watts but rode it mostly on feel.

AB: I rode it full gas, but I was knackered; I just rode at what I thought was the right amount of watts that I could hold – I beat the time cut and that’s what matters. 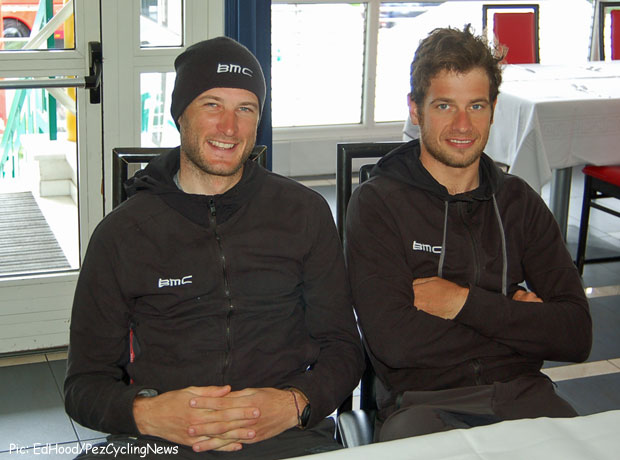 AB: It would have been good to do the Stelvio if the sun was shining; but I’m pretty happy that it was cancelled – I’m fighting for last place.

SC: I’m disappointed but like Adam said, it’s one thing doing it on a sunny day – it’d be a great stage – but under the circumstances the organisers did the right thing.

PEZ: What was the agenda, today?

AB: Well, I woke up, had pancakes, we moved to this hotel and then did one 1:7 on the bike.

SC: I did two hour-sish. On a day like this you have to balance rest with being careful your body doesn’t shut down. If you studied the sports science I guess you could do a shorter run with specific efforts to open you up. On the first rest day I did nothing because I was sick; I felt bad but when I’m training at home in the winter I have days completely off, so my system is used to it. 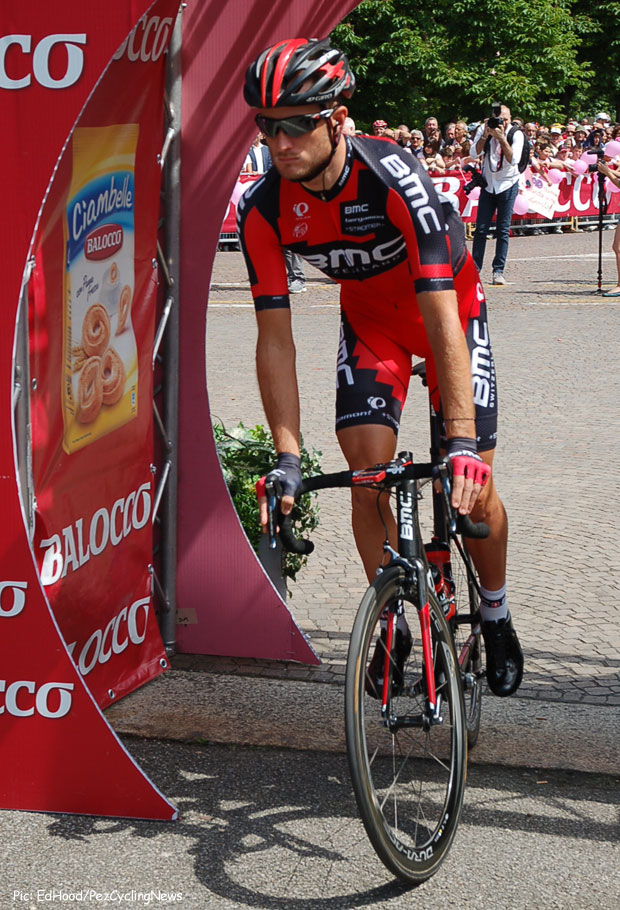 PEZ: Uran and Scarponi will be on the attack, tomorrow.

SC: Yeah, they’ll be gunning for Cadel. I haven’t studied the percorso but it’s gradual downhill and then gradual uphill to the climb – so our first job will be to make sure the break is the right one. Then it’ll be the usual, keeping Cadel out of the wind, fetching his bottles and making sure he’s well placed for the last climb. Sky will try to put guys in the break; it’ll be tactical – we’ll discuss our own tactics in the morning.

AB: It’ll be pretty much out of our hands, it’ll all be down to what happens on the last climb . . .

SC: There’s what I’d like to do and what I’m actually doing. I’d like to take a month off racing and prepare properly for the second half of the season – the Vuelta, China and the Worlds. But I’m riding the ZLM Tour; the British Champs won’t be a priority but I’ll ride it.

AB: I’ll have to speak to my coach but I’ll have a steady week and then I have the ZLM Tour. I’ll ride the British and see how it goes.

AB: He’s a knob head and should get a life time ban!

SC: It’s so frustrating; a big part of the problem is teams taking riders like him back on board. It’s bad for the sport; it’s bad for the team and so selfish.

PEZ: What’s the main thing you’re looking forward to after the race?

AB: A vodka and tonic, being home, relaxing with friends and eating pizza.

SC: You’ve been doing all of that anyway! I’d just like that month off racing to prepare properly for the second half of the season.

AB: What he really means is so he can drive his Vespa around Italy!