Sky will no doubt ‘spin’ it – and they did win the stage with Rigoberto Uran, who now lies third on GC @ 2:04 – but the Colombian’s stage winning attack provided the kindling for the fires of lactic which burned through the legs of team leader, Sir Bradley Wiggins as he slid off the pace in the last kilometres of today’s stage to 1519 metre Altopiano del Montasio.

It looked as if the Sky plan was for Sir Brad to hitch a ride on the coat tails of those chasing Uran. But as Rabbie Burns said, ‘the best laid schemes of mice and men go oft awry’ and Wiggins lost yet more time. Carlos Betancur (AG2R) made it a Columbian one-two; but in third place is the man who is looking more and more comfortable in that maglia rosa – Sicilian Vincenzo Nibali (Astana). And Cadel Evans (BMC)forced me to eat my words again as he took fourth and cemented his second place on GC – I’m the one who said that he wouldn’t be a challenger . .

Some were there to bid for glory, some with an eye on bonus seconds or the time cut – and some because their DS told them to be. Behind him there were men all over the mountain, courtesy of the break splintering and Wiggins’ Sky boys riding tempo on the climb. Their pace making met with no resistance from Nibali, Scarponi (Lampre), Gesink (Blanco) and Evans – all happy to tackle the climb at a steady, if nippy pace. Not so happy was Ryder Hesjedal (Garmin) distanced again, courtesy of Sir Isaac Newton’s great discovery with Tom Danielson again on damage limitation duty.

Off the climb on the descent Astana tried to turn the screw on Wiggins, but he was solid on dry pavement. What must be remembered is that when it rains on a long descent, a man with Wiggins’ almost dangerously low body fat feels the cold more than most – psychologically as well as physically not the best situation. In the valley, after feeding and watering, Sky got back into formation and began to tap out that horrible rhythm, again – as up ahead Rodriguez changed bikes.

Manager Gianni Savio looked on but didn’t get involved – oils spots on his sports jacket would never do.

The Final Climb
The organisers say this of the climb to Altopiano del Montasio and the first mountain top finish of the race:

The final climb measures approximately 22 km, with the final four km at very high gradients. Last kms: The 11 km consists of steep, challenging climbing. After the bridge over the Torrente Raccolana (156.5), the gradient touches 14%. Between eight km and the Intermediate Sprint at Sella Nevea (km 162.6) lies a succession of hairpin bends. The right-hand hairpins are in tunnels, with good visibility. After Sella Nevea, the road narrows for nearly two km, gradients exceed 12%, with a maximum of 20%. The final two km are uphill, although less steep. The finish line stands at the end of a 60m straight on asphalt, 4m wide.

Sky continued to tap out the rhythm as the first ramps came, whilst ahead Rodriguez had been caught by QuickSteps’s Serge Pauwels but with less than two minutes advantage and Sky in full automaton mode there was no chance of either man winning. With the likes of Samuel Sanchez having used demon descending skills to get back on, it was a fair sized group riding into the hill – but the tempo Sky were setting left little doubt that the group wouldn’t be so big come the finish line.

At 10 K the group was still of descent proportions, but as the gradient kicked steeper and Rodriguez and Pauwels were caught, riders like Sanchez had nowhere left to slide to. Cataldo (Sky) set the pace from team mate Uran with Di Luca (Vini Fanini), Nibali, Wiggins, Evans, Gesink all there. With eight to go a comfortable looking Uran made his move; a pained Agnoli countered at the head of a much thinned group containing his Astana leader, Nibali.

Despite those chiselled cheek bones, Di Luca popped inside six to go; meanwhile Uran continued to look very relaxed as he grabbed a six second bonus sprint. Behind Evans, Scarponi, Nibali were all cool, calm, and collected but losing time to Uran. It was Intxuasti (Movistar) then Pozzovivo (AG2R) doing the countering – with Wiggins, Gesink and Scarponi not enjoying the steep hairpins and unable to hold the wheels. 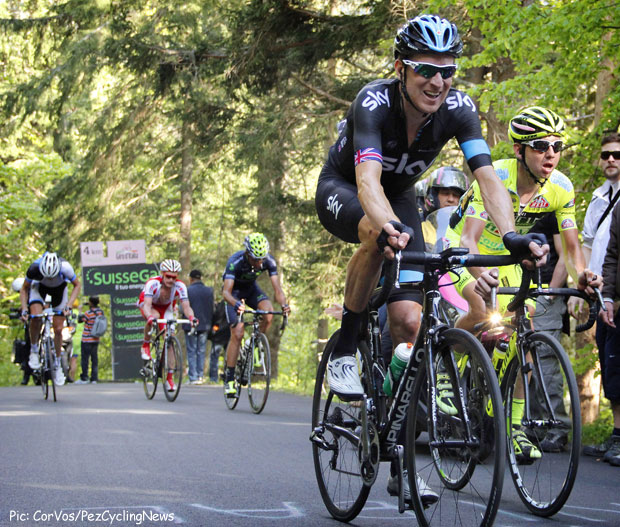 Nibali remained calm through it all, not too concerned with Pozzovivo’s gap as Evans realised that right now was a good time to put time into Wiggins and Scarponi and lent a big – if not too stylish – hand at the front. Evans efforts brought Pozzovivo back as the little Italian’s team mate Betancur was next to kick clear in pursuit of Uran. But despite his a big effort, Betancur couldn’t get across to Uran who struck a big blow for bad haircuts and retro training hats with his first Giro stage win. 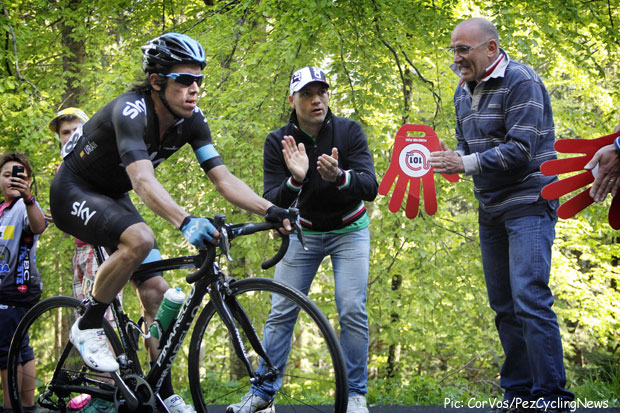 Uran soloed to the win and never looked in trouble – unlike his team leader.

Betancur hung on to second with a calm, cool and controlled Nibali taking the third place bonus seconds and Evans continuing to impress. The Australian is now at 41 seconds, Uran @ 2:04, Wiggins 2:05, Gesink 2:12 and Scarponi 2:13. Nibali looks solid – but it’s still a long way to Brescia. 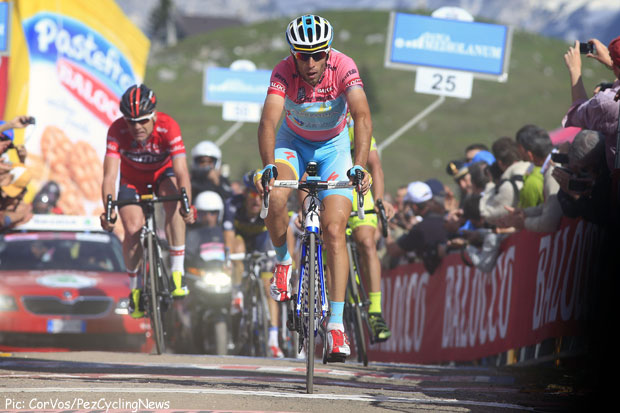