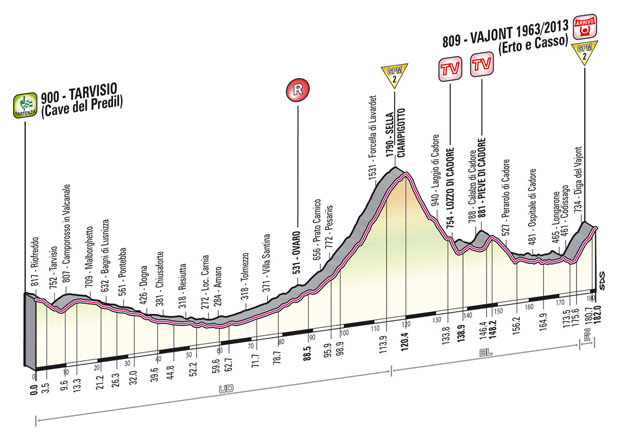 How It All Started
The opening hour of the race was run at a frenetic pace as seemingly everyone except the GC riders tried to get in the break of the day as they all knew that today could be the day for a break to go to the end. As is always the case though, finding the right composition of said break proved to be difficult with 53 kilometers being covered in just 1 hour before finally a 20 man break made it clear and stayed clear.

These twenty men represented 20 different teams meaning that only Lotto-Belisol, Lampre-Merida and Vincenzo Nibali’s Astana team were not represented in the move. Neither Lotto nor Lampre were prepared to chase the move back though and with Astana not concerned about anybody in the break, the gap quickly grew to more than 5 minutes. At this point Astana got on the front to ride tempo to keep the gap around the 5-6 minute mark but there was certainly no urgency in their work.

Stafano Pirazzi (Bardiani Valvole) was in the move to protect his mountains jersey but currently 3rd in the chase for the blue jersey, Jackson Rodríguez (Androni Giacattoli) was also in the move and it was Rodriguez who pipped Pirazzi for the maximum points over the 2nd category climb with 62km remaining. With the gap back to the peloton still hovering around the 6 minute mark it was obvious to one and all that the winner would come from this break but who would it be?

With a summit finish on a 7km long climb and solid climbers like Pirazzi and Rodriguez in the group, Argos-Shimano’s Patrick Gretsch knew the answer to that question would not be him so he took off on the descent with more than 50km remaining in a bid for glory. A couple of others in the group tried the same but it was the big German Gretsch who succeeded in getting away and he quickly time trialled his way to a good gap over the disorganized group. 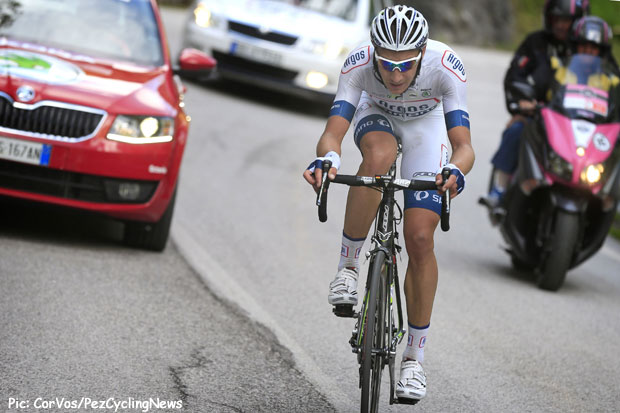 The Chase Is On!
With 24km remaining Gretsch had a 1m35s gap over the group who were only half committed in their chase with the size of the group contributing to their disorganization. It also didn’t help that every so often one member of the group would attack solo, completely disrupting the paceline with Danilo Di Luca often being the culprit. He, nor any of the others could build a gap though and Gretsch’s lead continued to hover around the 1m30s mark with the peloton a further 4m30s behind them.

At 21km to go Ag2r’s Guillaume Bonnafond found the legs to create a good gap over the group before looking around to see a blue and red flash fly by him, which was Ramunas Navardauskas (Garmin-Sharp) & Daniel Oss (BMC). Bonnafond couldn’t react quickly enough to get on this train and so he missed out on THE move of the day.

Navardauskas was simply flying pulling monster turns and was ably aided by Oss but it was Navardauskas who was doing all the damage to Gretsch’s lead pulling back the more than 1 minute advantage that he had and catching the German in less than 3km. In fact this duo were going so quickly that when they caught Gretsch he had to work super hard just to jump on the train. Unlike Bonnafond he was able to jump on although it took all his power that he had left and several hundred metres of pure pain.

We now had three in the lead with a more than 1 minute gap over the squabbling group behind and 6 minutes over the still Astana led peloton. 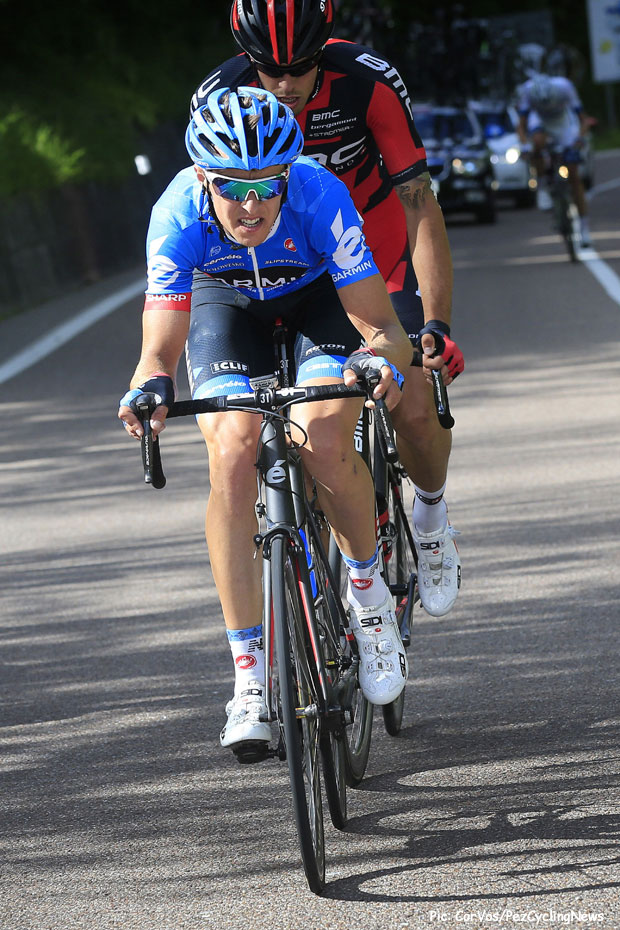 And Then There Were Two
Unfortunately for Gretsch his 30km+ solo break had taken all his energy and he simply couldn’t keep up with the Navardauskas/Oss duo, despite not doing any turns and he was quickly dropped. Two riders now approached the final climb of 7.5km @ 5.5% gradient and right from the bottom of the hill Navardauskas started to accelerate to try and drop Oss. The first time Oss responded well, sprinting back into his wheel, the 2nd time Oss responded again but the 3rd time it was too much and Navardauskas was now on his own with 5km still to climb to take the win.

Meanwhile back in the group the attacking amongst themselves continued with Bonnafond again off the front, chasing down Duque who had earlier parted solo but when the real climbing began it was mountains leader Pirazzi who was the quickest lighting up the road in 3rd place after Gretsch was caught and dropped. Pirazzi was never going to catch the two up front though and Oss was never going to catch Navardauskas who looked as strong on the climb as he did on the flat, simply powering up the climb like it was flat.

Oss on the other hand was struggling and straining in obvious pain but determined to hang on to 2nd place for the stage, which he did do coming in 1m08s down on the worthy winner Navardauskas. Pirazzi took more points with his 3rd place finish and then SKY’s Salvatore Puccio led the rest of the group home more than 3 minutes after the winner. 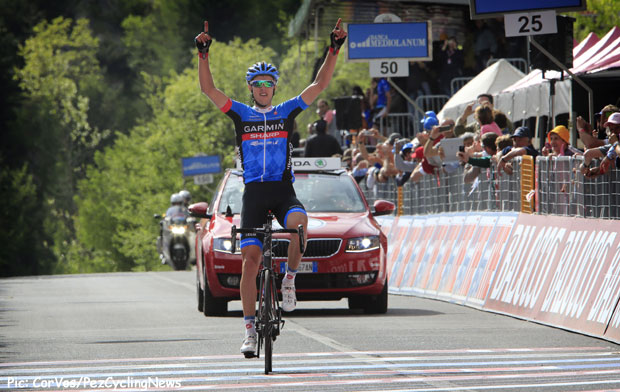 A well deserved win for Ramunas Navardauskas after an extremely strong performance.

Back in the bunch things were calm – as calm as climbing a 7km climb can be that is – with no action amongst the big favorites except for Ryder Hesjedal once again being distanced, climbing the hill with Cavendish and co. many minutes down.

So no changes in the GC for the top ten, but a worthy winner in Garmin’s Ramunas Navardauskas which will be very welcome news after the disappointing performances by their leader Hesjedal.