At 254km Stage 13 was the longest stage of this year’s Giro and had a flat enough profile to make all signs point towards a sprint finish. RCS managed to find a few hills on the run in though & with a couple of steep & winding descents thrown in meant that the finish was a far from simple affair. 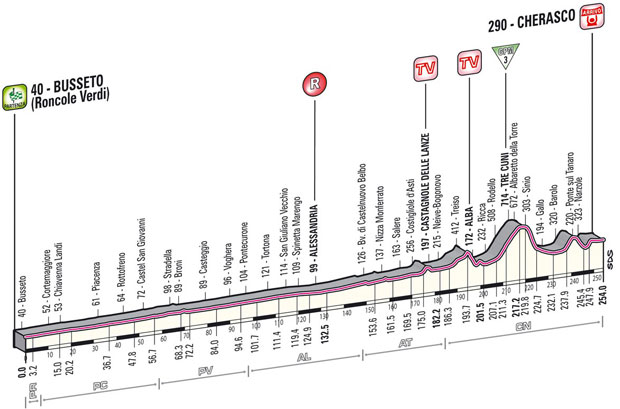 Before the stage two of the big names of the Giro managed to make the news without even turning a pedal as Bradley Wiggins and Ryder Hesjedal both decided not to start today. Illness and a loss of energy and power for two of the big pre-race favorites meant that the last few days in the rain have been nothing short of dreadful and the prospect of the longest stage of the Giro to try and recover and then a weekend of riding in the predicted snow in the mountains not to either riders’ liking.

The long stage was however to the liking of a number of riders, especially the 7 who made the break of the day who obviously planned for a LONG day out front, breaking away in the first hour of racing. There were three away earlier than the others: Danilo Hondo (RadioShack Leopard), Giairo Ermeti (Androni Giocattoli), Rafael Andriato (Vini Fantini-Selle Italia) but they were later joined by Pablo Lastras (Movistar Team), Tobias Ludvigsson (Team Argos-Shimano), Nicola Boem (Bardiani Valvole-CSF Inox) and Lars Ytting Bak (Lotto Belisol) to make a solid 7 man working group. 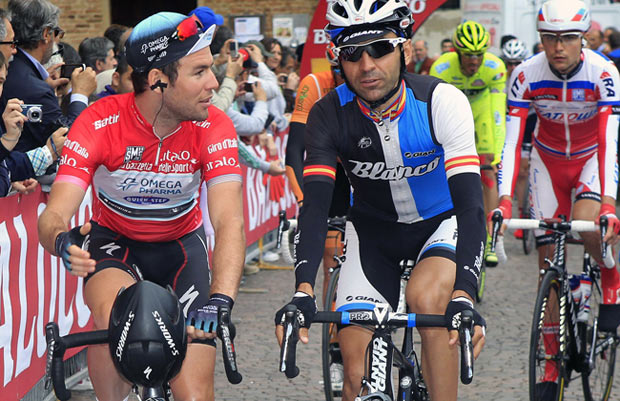 With 140kms remaining this group had built their gap to a sizeable 13 minutes over the peloton before OmegaPharma-Quickstep, Orica-GreenEdge, SaxoBank & Astana all decided that was enough, sending men to the front. This combined effort in the peloton and the long kilometers already covered out front by the seven riders saw the gap drop fairly rapidly with them having less than 2 minutes lead as they started the 3rd category climb with 46km remaining.

It was here that Boem, Bak and Lastras rode clear of the rest as they tried to prolong their move but the writing was on the wall with the OmegaPharma-Quickstep bunch breathing down their necks. Cav’s team dropped it back a gear on the climb though trying to keep a steady Cav-friendly pace but Vini Fantini had other ideas hoping to cause some splits by sending riders up the road. The peloton was strung out thanks to these efforts but Cav was climbing well, always in the first 30 riders in the peloton and he wasn’t going anywhere. Other sprinters weren’t looking so good though with Matt Goss and Sacha Modolo both in trouble.

At the top of the climb the trio in the break were still out front and trying hard but the gap had been reduced to only 30 seconds and the chances of the stage finishing in a sprint were getting higher and higher. There was a couple of small hills to negotiate first though and the attacks continued both in the peloton and in the front group as a small move made its way off the front of the peloton and Pablo Lastras made his way clear out front alone from the lead trio.

The attacking group caught and passed Bak & Boem and then soon caught up to Lastras who immediately went to the front to work as the group had his Movistar teammate Lopez in it. I don’t know where he found the energy for it but Lastras after more than 200km in front continued to drive this new group but despite Lastras’ best efforts the peloton were coming back to them with OmegaPharma still in control although Cav’s team were rapidly losing men as the day long chase took its toll.

At 3km before the finish the last remaining rider out front in Giampaolo Caruso (Katusha) was swept up and a bunch sprint was evident. GreenEdge now had control of the bunch but their sprinter Matt Goss was no longer in the field so they’d switched to plan B – Brett Lancaster. OmegaPharma didn’t have a Plan B as Cav was always their man but they’d run out of troops and Cavendish was left to surf the coattails of the Cannondale and GreenEdge leadouts as the peloton raced under the red kite. Cannondale dived up the left of the road for Viviani, RadioShack had numbers there with their Italian pairing of Giacomo Nizzolo & Daniele Bennati whilst Lancaster looked a little lost without a teammate to lead out. Cav hesitated before starting his sprint but when he did launch there was no stopping him, flying down the right side of the road and coming from a difficult postion to take his 101st win of his career ahead of Nizzolo and Argos’ young Slovenian sprinter Luka Mezgec. 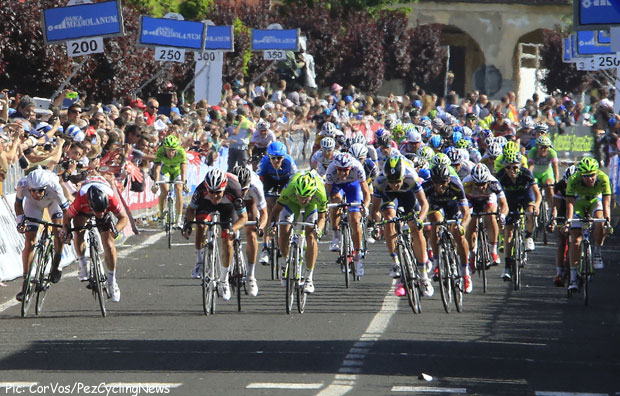 Cavendish in the red points jersey launched his sprint down the right hand side in typical low down style with the typical result – another superb win.

No changes in the General Classification today but that’s a sentence you won’t be seeing at the bottom of tomorrow’s stage report with a summit finish at altitude sure to shake things up. Keep it tuned to PEZ for all the latest! 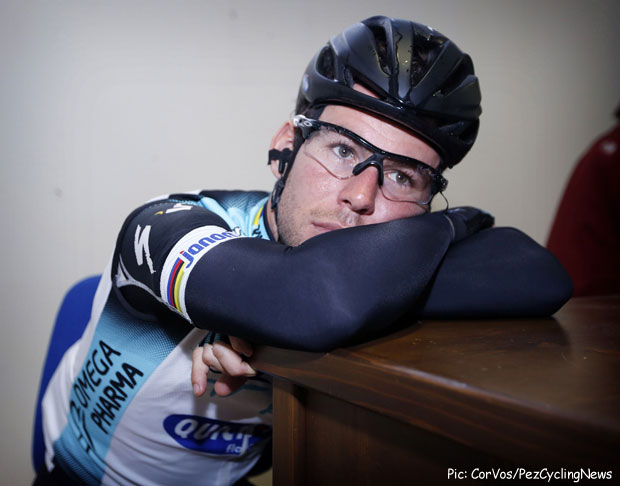 Sprinting 101 by Mark Cavendish – get over the climbs and be the quickest. Simple really.