On a day which threatened to be overshadowed by the inclement weather conditions it was an Italian rider, on a Spanish team, who took the day in France. Giovanni Visconti (Movistar) rode away from his breakaway companions on the Telegraphe and despite concerted efforts from both the chasers and the peloton managed to maintain the gap all the way up the fearsome Galibier to the finish at the Pantani monument just 4.25kms short of the summit.

How it all Started
After the shocking weather conditions of yesterday which forced a route change it was feared that the race would be curtailed today as it headed into France. At a meeting last night it was decided that the race would start as normal and head up the Galibier with a new finish just short of the summit at the Pantani monument, a fitting tribute to a favorite son of the Giro. The riders were not so sure of conditions today though and from the start at Cesana Torinese they effectively neutralized the racing all the way up the Col du Mont Cenis, possibly thinking about ice on the descent or allowing tired riders from yesterday some leeway with the eventual cut-off point at the end.

A small group was allowed to go clear as they approached the summit and headed for the KOM points. Once across the top it became clear that Pieter Weening (Orica GreenEdge) had failed to read the script as he set off on his own. This forced the rest of his erstwhile breakaway companions to chase and he was quickly joined by Giovanni Visconti and four others. They quickly gained time on the peloton which was being controlled by Luca Paolini (Katusha) on the descent. The break was being driven by Weening and whenever there appeared to be some slowing he quickly pushed ahead forcing the others to catch his wheel. They drove on and at one point the gap went out to some six minutes.

With about 45kms to go the peloton began to see some action with AG2R coming to the front and pushing with, inexplicably, Lotto Belisol. It was easy to see that AG2R were thinking of their riders in the Young Rider competition but less certain why Lotto were chasing. Astana though just kept to their own pace and didn’t allow anyone to interfere with their well-oiled plan of protecting Nibali.

Hitting the Telegraphe
As the group came on to the Telegraphe they still had some 2:20 in hand over the peloton which now saw a concerted attack from Robert Gesink (Blanco Pro Cycling Team). He was quickly joined by Egoi Martinez (Euskatel-Eukadi) as behind riders were being shed from a peloton which was shrinking in size. Up front, the break was beginning to splinter as Pirazzi (Vini Fantini-Selle Italia) attacked and was quickly joined by Weening. Visconti looked to be in trouble but eventually dragged himself back up to the leaders.

Others were by now chipping off the front of the peloton in an attempt to get across to the Gesink/Martinez pairing and they were soon joined by Henao (Sky) and Di Luca. It was just as these two riders were joining the chase group that Visconti rode away from his companions at the head of the race initially looking as though he was going in search of the KOM points at the top of the Telegraphe. He soon opened up a 20 second gap while back with the peloton more riders were forming a chase just ahead of the Maglia Rosa group of Nibali and Evans (BMC).

The Grind to the Finish
As Visconti crossed the summit of the Telegraphe and sped down the short 4km descent to the Galibier he had a minute over his former companions and almost 3 minutes over the peloton with only 18kms to go. Could it be possible that he would hang on? With snow now falling at the finish it didn’t look promising but some 7kms later not a great deal had changed with the gaps to both the break and the second group of Gesink staying much the same. Eventually Weening was getting frustrated by a lack of help in catching Visconti but it was Rabottini who took off in pursuit of the lone leader. He managed to open a gap of 20 seconds back to the Weening group but it never really went beyond that and he hung out in no man’s land for most of the climb. Back with the peloton and the Gesink group had by now been reeled in by the work of Astana with Nibali looking super-cool the whole time, albeit that Evans was always right there with him. 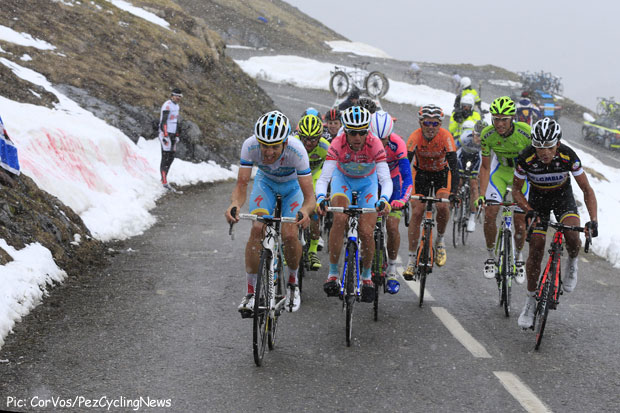 Visconti continued to climb well and with the time gaps coming down very slowly it began to look like a possibility for the Italian. The weather was beginning to deteriorate when a serious-looking break came out of the main peloton led by the flashing gold shoes of Samuel Sanchez (Euskatel-Euskadi) who was quickly joined by Caruso (Cannondale). As the remaining kilometers counted down they gained 15 seconds over the Nibali group and began to make inroads on the chasers but Visconti was mighty up ahead and his lead stayed virtually unchanged.

At 2kms to go it was fracturing behind Visconti; the Sanchez break had been caught, Kelderman (Blanco) had passed Weening, and Rabotini was about to be swept away. In a show of strength the pink jersey attacked what was left of the peloton but was quickly caught by Evans. This was more a demonstration to discourage any glorious action from the Australian rather than a serious attack. But it was all too late as Visconti was now at 500 meters to the finish and could be sure of the win. True professional however he continued to push all the way to the line taking a worthy victory on one of the most fearsome mountains in cycling history. 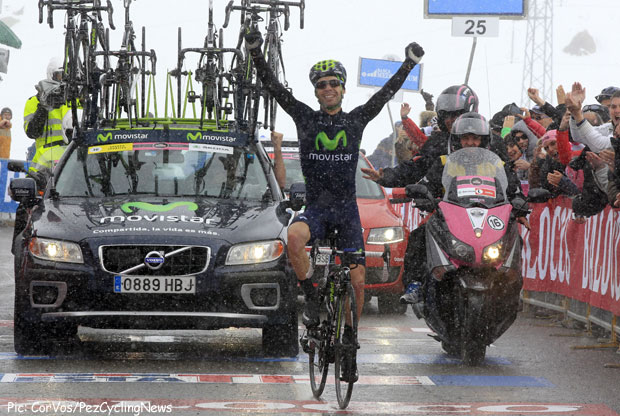 Second place went to Betancur (AG2R) and third to Niemiec (Lampre-Merida) some 42 seconds after the winner had crossed the line with the Maglia Rosa group being led home by Scarponi (Lampre-Merida) another 12 seconds back.

The riders will be glad of the rest day tomorrow after the exertions of the last two days but it’s not over yet. Nibali looks to be in exceptional form but there are still riders lining up to attack him for this Giro with Evans, Uran (Sky) and Santambrogio (Vini Fantani-Selle Italia) the likeliest pretenders to the title.

More photos and roadside report coming soon when our guys have managed to make it off the mountain and out of the snow!