Race Report: Another transition stage as the mountains approach but the opinions were divided on how the stage would run out. Bunch sprint, small group sprint, long breakaway? Well what we were treated to was another all out attack fest where the hits just kept coming but once again it was Movistar coming out on top.

The fly through of Stage 17 from Global Cycling Network

As the video from GCN shows us, today’s stage was most certainly a transition stage but much less difficult than yesterday’s effort. With there being 16km to the finishline after the summit of the final categorised climb of the day in theory that should have given any dropped sprinters enough time to get back on to contest the finish.

Mark Cavendish stated before the race though that this stage was not for him with the climb at the end being too difficult. He’s often said that in the past and then gone for the win though so it was no surprise to see his Omega Pharma-QuickStep team leading the chase when the day’s breakaway got more than 5 minutes up the road.

The men in that break were stage 9 winner, Maxim Belkov (Katusha), Miguel Rubiano (Androni), Gert Dockx (Lotto Beilsol), and Australian road and tt champ, Luke Durbridge (Orica-GreenEdge) who broke away just 5km into the 214km stage meaning they had one seriously long ride ahead of them if they thought that they could make it to the end. There’s a lot of tired legs in the peloton though and the chase by Cav’s squad, Argos and Movistar proved harder than they thought with the gap still at almost 4 minutes with 60km remaining.

Action Time!
The real action of the day though was always going to be in the last 22km with the 4th category climb of Crosara going to be the make or break point for the possible winners of the day. Leading into the hill the now 3 man front group after Maxim Belkov dropped off a few kms earlier had just 1 minute with the bunch strung out by Lampre-Merida, chasing hard.

As soon as the climb started Dockx went backwards to leave two in front and as much as Durbridge dug hard, he too was quickly dropped by the impressive pace making of the little Colombian Rubiano Chavez. The Androni man was riding like he’d just shot out of the pack on the attack – not already been in the action for more than 180km. With his gap hovering around the 30 second mark and the peloton shrinking as sprinters such as Modolo and Cavendish were dropped, Danilo Di Luca came screaming out of the peloton for another attempt at Giro glory. He’s not the Di Luca of old though and it took him quite a while to cross over to Rubiano and when he did get there it was clear that he was already well at his limit.

It was then the turn of another Italian with a dubious past to have a go, Giovanni Visconti attacked from the peloton and he simply flew across the gap to Di Luca and Rubiano, rested in their wheels for a few moments and then took off again. This was too much for Di Luca, but incredibly Rubiano had enough in him to go again, jumping into Visconti’s wheel. Visconti who is clearly on the form of his life after winning on the Galibier just a couple of days ago wanted to be alone though so he attacked again 1km from the summit and this time it was the end for Rubiano.

Meanwhile back in the peloton things were relatively calm as the high pace set by Lampre-Merida discouraged any attacks with the action happening at the back of the pack where the sprinters and semi-sprinters were all being dropped until the peloton that crested the summit 31 seconds down on Visconti was only 30 riders strong.

It’s TT Time!
Visconti now had a 16km time trial and only a 30s lead over the peloton if he were to achieve his 2nd stage win at this Giro and continue Movistar’s incredible run of stage wins. Luckily for him the first 6kms were a technical downhill where he excelled taking a few more seconds lead but after that it was a flat 10km run to the finish.

So with Visconti desperately trying to hold off the chasing lead group there was also the matter of the sprinters to contend with who were in a desperate fight of their own – the fight to get back on terms with the lead group. Impressively Mark Cavendish got over the climb just 1 minute down on the pink jersey group of Nibali but the speed of the initial downhill run meant that he and his entire team surrounding him were just over 1 minute behind at the start of the flat 10km section.

Although the small leadgroup/peloton was completely disorganised in their chase of the lone leader, the constant attacking in this group and the subsequent high speeds meant that Mark Cavendish’s chances for a stage win today were gone. Impressively Bardiani’s sprinter Sacha Modolo and RadioShack’s ageing fastman Hondo had made the front group but with seemingly every rider in the front group of 30 – barring the top 5 on GC – all attacking at least once the chase was a mess.

This was all good news for Visconti who never faltered in his time trialling efforts, consistently maintaining around 25 seconds lead over the chasers which gave him enough time when he entered the finishing straight to sit up, zip up the jersey and soak in the atmosphere of the big crowd that was somewhat missing from his snowy win on the Galibier on Sunday. 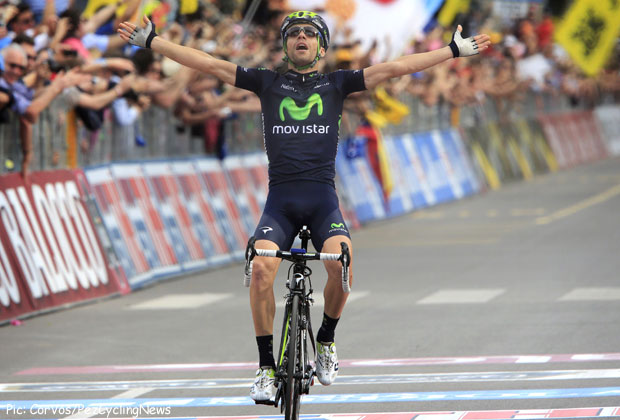 Just 19 seconds later the pink jersey group came flying into the finish, led home by another stage winner in Garmin’s Ramunas Navardauskas who unfortunately for him thought that he’d won his 2nd stage and embarassingly celebrated the ‘win’. That makes two fake celebrations for this Giro so far after Carlos Betancur’s efforts in the first week. 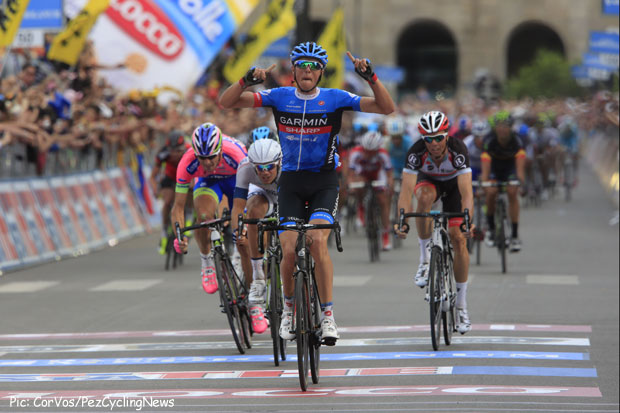 So another exciting day at the Giro down, no changes in the top 10 on GC but that’s all going to change after tomorrow’s mountainous time trial and then two big days in the mountains on Friday and Saturday. As always, keep it tuned to PEZ for all the latest photos and roadside reports.