Race Report: Is it all over bar the shouting? The man that some call ‘Nibbles’ took a big bite out of his Giro d’Italia opposition with a storming uphill TT win to Polsa. As Evans suffered in the rain, the pink-clad panther performed with panache to put himself in a position so comfortable, he could be reclining with a cigar, dressed like Hef, being fed grapes by … well, you get the picture.

The time gaps between the top finishers shouldn’t be massive, but once we drop down the classification the differences will be cavernous. The start ramp is in the home straight of the velodrome in the town of Mori, and looking out over the riders’ shoulders you can see, not urban sprawl, but grassy slopes, trees and mountains. It’s a pretty start to what’s going to be around three-quarters of an hour of pain.

The first two kilometres or so roll uphill very gently, then it pitches up more dramatically. At the time check (9.4kms) in Brentonico, the road flattens, then a nasty kick before the road rears up to 10% and on to the finish.

The Global Cycling Network’s flythrough of this tough time trial

Miguel Minguez (Euskaltel), Steve Cummings (BMC) and Movistar’s Eros Capecchi are early pace-setters, and the conditions are OK, but the skies are threatening. Dario Cataldo (Sky) and Stef Clement (Blanco) then take their turns in first spot.

Kosta Siutsou (Sky) rolls towards the line, the advertising hoardings glinting on either side of his reflective visor. Sky and Movistar are locked in battle for the team classification, so no-one on those squads gets a free pass today. Balls out, all the way to the top.

It’s all plots and sub-plots as we wait for the general classification contenders – Carlos Betancour (Ag2r) flies off the start ramp, chasing his white jersey rival Rafal Majka (Saxo-Tinkoff).
Mauro Santambrogio looks like he’d rather be anywhere but in the start house … how many times can he cross himself in the final five seconds before he goes? Close to a world record, I’d say.

Sammy Sanchez is on a very good day and posts the top time after a very tasty display of climbing. The rain is just starting to dribble out of the leaden skies.

Betancour is out of the saddle and rocking, rolling for the line. He finishes just outside Majka’s time – the Pole, back in white.

The time checks for Cadel Evans aren’t too clever. He’s losing time to Nibali, but also to Scarponi and Uran. Vincenzo Nibali is flying, maybe stung by the polemics of the Italian press. Winning the Giro isn’t good enough; winning in style is what counts, and he needs at least one stage win along the way. He’s half-a-minute faster than anyone else at the time check. It’s now pouring rain – of course, it’s the 2013 Giro! – as Niemiec (Lampre-Merida) hauls himself to the line.

Nibali is putting massive time into Cadel Evans: a minute, a minute-and-a-half, two minutes! Rigoberto Uran is hunched on his TT extensions, rolling a big gear. It looks conservative, but his style is deceptively quick. 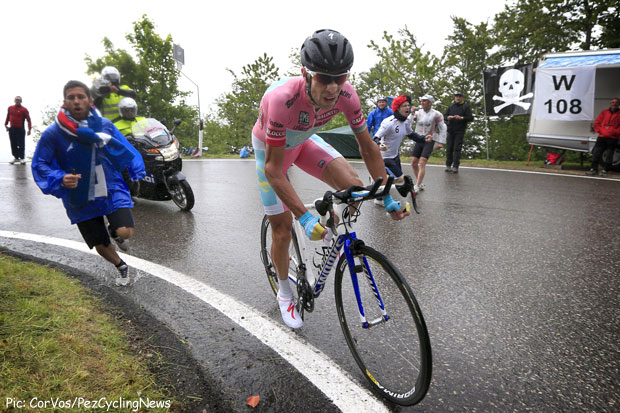 Michele Scarponi has done a decent ride, and is putting himself in with a good shout of the podium. He comes in third. Sammy Sanchez is still in the hot seat. It’s that disconcerting one in front of the moving sponsors’ hoarding. It always make me think that the rider I’m watching is having some sort of Exorcist-like head twist.

Now Uran comes in just five seconds slower than Scarponi. It’s all about the top two on the general classification now!

Nibali is sprinting towards the red kite; he’s more or less got Evans in his sights. Is he going to catch his three-minute (!) man? It’s a terrific ride from the maglia rosa. Watching the whirlwind approach, Sanchez is shaking his head: he knows Nibali is going to win this.

The Aussie reaches the line, labouring on a less than sparkling day. Nibali roars home smashing the previous best time, closing to within spitting distance of Evans. 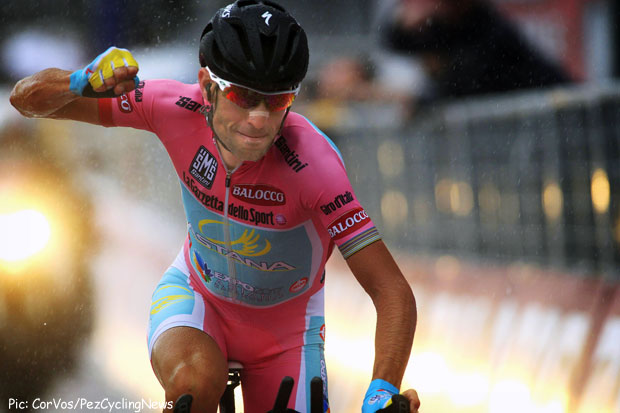 Nibali delivers the stage win, and pretty much seals the Giro. Or does he? Two possibly monstrous days remain in the Dolomites; can anyone, or anything dislodge the Astana star?

Stay tuned to Pez to find out!