Race Report: After what seems like three weeks of snow, sleet, rain and grey skies, today is beautiful like we always imagine Italy should be. Blue cloudless heavens, sunshine and gorgeous lakeside towns. The 2013 Giro d’Italia ended in a sprinters’ firefight, and Cavendish came out on top today. But the overall glory goes to Vincenzo Nibali …

It’s the first Giro finish in Brescia although the race has visited often. It’s also a flat, sprinters’ stage, rounding off with seven short laps through the city center.

Most of the classifications are settled. Nibali’s going to take the pink jersey home; Stefano Pirazzi has the blue mountains jersey; Betancur unseated Rafal Majka for the young rider’s tunic yesterday.

Only the maglia rossa needs shoulders to rest on: Nibali leads the points competition, but surely Cavendish can find the twelve points he needs to ensure a full set of Grand Tour points classification wins? 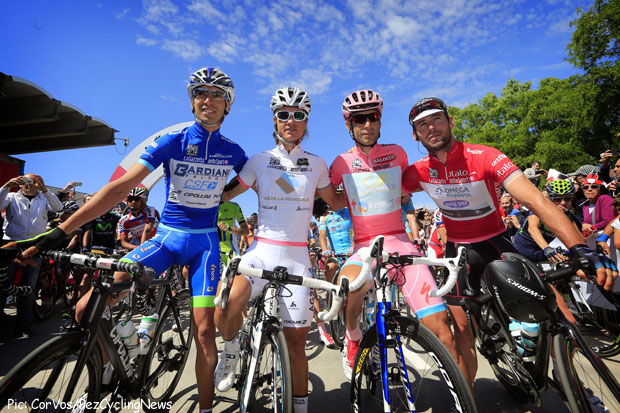 The jersey winners before the stage started. Cavendish in the red was wearing Nibali’s jersey that was ‘on loan’ but he was hoping to change that status by the end of the stage

Rolling out of a warmer Riese Pio X this lunchtime, no-one has the energy or will to attack. It’s parade time, and Nibali is pretty in pink with his Astana guard around him OmegaPharma-QuickStep are also noticeable at the front, keeping an eye on things for Cav.

The Astana boys are wearing pink mitts, rocking pink bar tape … and traditionalists will be happy that Nibali is on a non-pink paint-job Specialized S-Works. 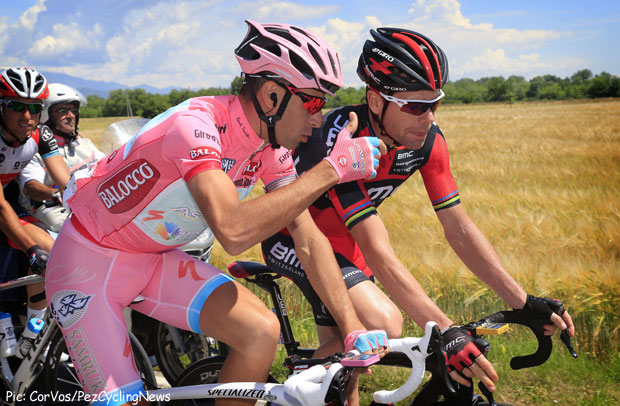 As the first sprint approaches with 70kms to go, Cavendish starts to move forward; he has a quick word with Sky’s Danny Pate and Spanish champion Fran Ventoso from Movistar, as if to find out who’s going to fight him for it. There’s a bit of a scrap and Cav has to battle for the line with Visconti and Andriato but takes back eight points on Nibali.

A couple of clicks later, and it’s a double Dutch attack – Vacansoleil-DCM pair Rob Ruijgh and Maurits Lammertink take off. OmegaPharma-QuickStep get the back in Rivoltella and Julien Vermote gives Ruijgh a fearsome glare as he passes. That’s enough to put a lid on things until the peloton reaches Brescia.

The finishing circuit is going to be tricky: narrow streets, a couple of tight corners and a couple of twitchy sprinters mean it’ll be interesting. Vini Fantini’s Stefano Garzelli, 2000 Giro champion, is sent off the front to take the applause of the crowds – he’s riding his last Corsa Rosa. He waves, glances back at the peloton and nods acknowledgment, then high-fives a fan.

OPQS ramp up the speed immediately to try and give Cav a clear shot at the intermediate sprint. Androni’s Giairo Ermeti takes off on a little attack, and has to offer a Moto GP leg out for balance as he takes a corner waaaay too quick.

No-one seems to know when the intermediate sprint is …? OmegaPharma are on the front but the sprint train doesn’t hit full gas. Cav rolls across the line with 21kms to race. But the sprint is on the next lap – 16.7kms to go. The kids watching by the roadside don’t care: “NEE-BAH-LEE, NEE-BAH-LEE!”

Eventually, after two pretend sprints, it’s the real thing and OmegaPharma lead Cav out ahead of Visconti – he overhauls Nibali for the points competition lead.

The speed is ferocious, but OmegaPharma keep it together pretty neatly until the bell lap, but then they get swamped a bit. The field is splitting under the pressure as RadioShack come through. Cav’s boys get back in front, but it’s basically a two-kilometer lead-out. Cannondale bully their way to the front at the red kite.

Into the final 150 meters, the sprinters fan out – Viviani is there for Cannondale, but Bardiani’s Modolo is in front. Cav moves up, shoulder-to-shoulder, and the Manx Missile pours out the final ounces of effort to dive past for stage win number five of this Giro. 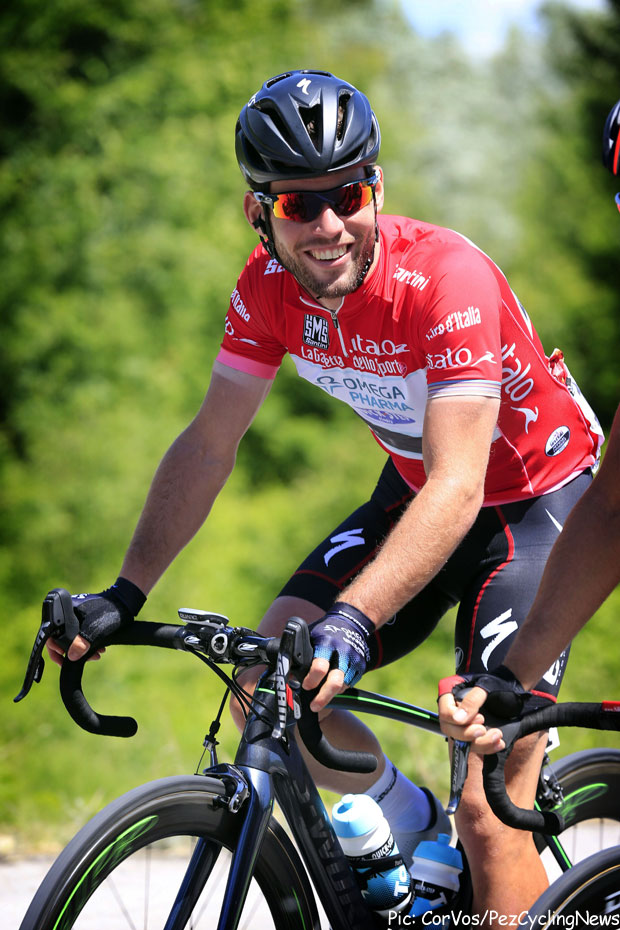 It’s been a tough Giro but Cav can head home a happy man with points jersey victories now in the Vuelta, Tour and the Giro

Nibali is safely home in the pink jersey, and finally allows himself a smile. It’s been a dominant and controlled display of power – no sign of Nibali’s apparently ‘guaranteed’ bad day in the mountains.

That’s it for our race reports but Ed Hood is still roadside – stay tuned for his words from Brescia. Ciao!

Great success of participants in the III GRanfondo Alberto Contador