Maark Cav-en-dessh! He’s the king; and let’s not hear a word out of place about his QuickStep team, they drove the race all day long and finished the job off beautifully with Steegmans delivering a virtuoso lead out.

Viviani second, Goss third, Bouhanni fourth and Gavazzi fifth – they were all there. But once again it was the man in the ‘stealth’ helmet who was too fast for them all. Picking his team mates out one by one in the finish line melee, he hugged them tight – they deserved. It wasn’t all so inspiring four hours earlier, though . . . 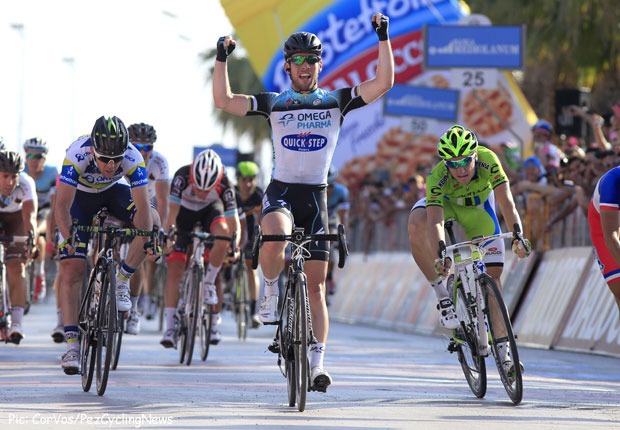 Let’s Go Back To The Start
The horror, the horror – a sprinters’ stage! The RCS writeup for today’s stage: ‘The stage is largely flat and mostly follows the Apulia coast along roads that are sometimes narrow and with occasionally worn pavement. The stage passes a number of inhabited centres with roundabouts, traffic islands and sections of paved road surface. After intermediate sprints at km 64.8 (Trani) and km 75.9 (Barletta), the route turns inland, before returning coastward for two 16 km circuits around the extraordinary saltpan. The circuits are more or less square in shape, with very few curves. The last real turn is more than 3 km from the stage finish. Last kms: The final 3 kilometres are more or less straight, with two very slight curves about 2 km from the finish line. At the finish line, the road width is 7.5 m, and the surface is asphalt.’ 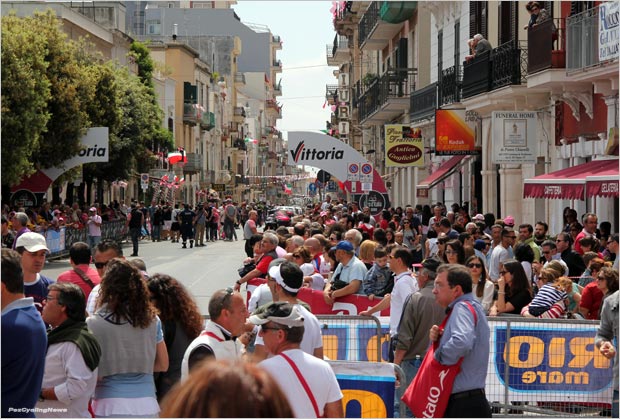 Even the organisers can’t make the parcours sound exciting. The camera lingers on castellos, the olive groves stretch out to the horizon and the TV race commentators begin to think that maybe Dave Duffield wasn’t so bad at his job, after all. Give me the Ras in Ireland or the Volta in Portugal; riders fly off up the rode with ne’er a thought of anything other than putting some daylight between themselves and the peloton. It usually ends in tears but it makes for great racing.

It was Jack Bobridge (Australia & Blanco) and Cameron Wurf (Australia & Cannondale) who made the set piece ‘break of the day.’ Bobridge, a former multiple national and world track champion at junior and senior levels surprised many at the end of 2012 by jumping ship from Australia’s very own Pro Tour team, Orica-GreenEdge to head to The Netherlands and Blanco. His track brilliance hasn’t yet transferred to the road, but at just 23 years-of-age, he has plenty of time. Wurff, at 29 years-of-age is back with Cannondale after a year at Pro Continental level with Champion System. He came late to the sport after a career as a rower, where he competed at Olympic level. 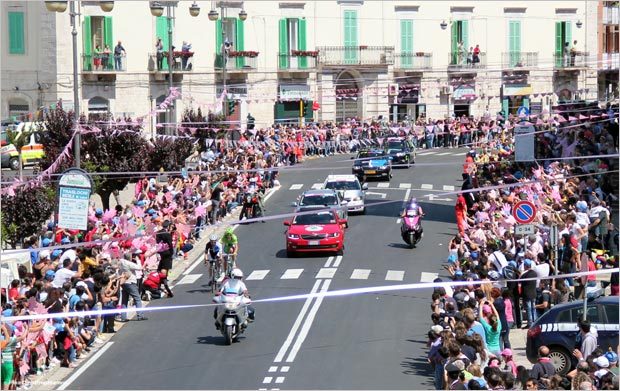 Wurf was reprising the role he played on Stage One where he was away solo for much of the day to keep the heat off Cannondale and Viviani. Exiting stage right at little more than 10 kilometres into the stage the pair took their advantage to a maximum 6:25; but the fast men’s teams were taking no chances as QuickStep for Cav and FDJ for Bouhanni tapped out a rhythm to keep the two bushrangers in check at around two minutes from 100 kilometres out.

The breakaways stretch and grimace, more olive trees, shots of babies in Giro bandanas, the QuickStep and F des J guys do their job – faces giving away nothing, but inside 40 K those pedals cranks are turning faster. Wurf and Bobridge know it’s over and have a word; but Wurf is still on duty, he has to distribute the bottles the team car has loaded him with as he slides back through the peloton. The pace is quick but not warp factor as they hit the first of the finishing circuits.

Wiggins has a mechanical, there’s a crash, it’s a big one, the road is blocked,

Wiggins can’t get through – high drama on a sprinters’ stage. The peloton doesn’t exactly sit up but they don’t drive, either – QuickStep and FDJ have a job to do; GC isn’t their concern. Behind, they drive, desperate for the shelter of the peloton; most of Wiggins’ team is with him, hammering like demons. Sky come back and ride straight to the front with 20 K to go; but still lone souls fight for life among the team cars. QuickStep are still on the front with one lap to go; this is pressure, there’s only one result which will suffice for these men in around 18 minutes time.

Ten To Go!
QuickStep hug the Armco on the left, the bunch is twitchy, Sky are leading on the right; behind it’s stringing way, way out. Argos drive for Degenkolb, Astana keep Nibali out of trouble, Katusha do the same for Paolini. The big figure of Steegmans is well to the fore, the little figure of Cavendish in his back pocket. Movistar come up, Argos, Sky, no team has it by the throat, it’s ebbing and flowing with four to go. Wiggins is well up – and now Cannondale lead for Viviani; Saxo for Benatti, F des J for Bouhanni; and now Wiggins leads.

GreenEdge blast it, Cannondale shadow and inside one K it’s Argos but far, far too early. Viviani still has two men, Goss is there, Bouhanni gets boxed, there’s a lot of movement. But not from Steegmans, his giant figure tracks straight and true but has to switch left to find space. Cav is ice cool, time slows down, he knows where they all are and he waits and waits. And when he does launch there’s little doubt about the winner – even if Bouhanni does finish startlingly fast. The stage and the points jersey – a good day’s work for Cav; Paolini stays in pink as Brad breathes a big sigh of relief at the finish.

Not a bad for a sprinters’ stage.

Lee’s Lowdown: The Pain Of The Near Win