An attack from early in the stage by a group of opportunists, GC big guns attacking late in the stage, crashes, bad weather, a change in the GC lead and mishaps and mayhem – Stage 7 had it all! It also had a worthy winner in one of the nicest guys in the peloton, Lotto-Belisol’s Adam Hansen. This was no walk in the part, right time at the right place win though, he staked out his win through an enormous effort, riding his breakaway companions off his wheel before going solo for the final 20km and managing to hold off a charging peloton who were experiencing a huge battle themselves. It was truly a classic stage.

Emanuele Sella and Adam Hansen were looking especially strong on the challenging terrain but the whole group were working well together, quickly building their lead up to over 7 minutes in the tough conditions as the rain and subsequent slippery roads were making everybody’s lives difficult. There was the odd crash back in the bunch without major consequences and even a crash in the breakaway with 90km to go when Pim Ligthart went down in the wet before he quickly remounted and rejoined the front group.

In fact the sight of riders grabbing their bikes back up off the ground and remounting was to become a very common occurence over the closing 100Km – as was the sight of Emanuele Sella cresting the ever regular climbs in first position in the breakaway. At each summit though, just behind Sella was the big figure of Adam Hansen with his homemade shoes and extremely narrow handlebars seemingly on a huge day as he was climbing like a man possesed and appearing to be doing it easy as all the other riders in the group were struggling with the distance of the long break and the never ending hills on offer. 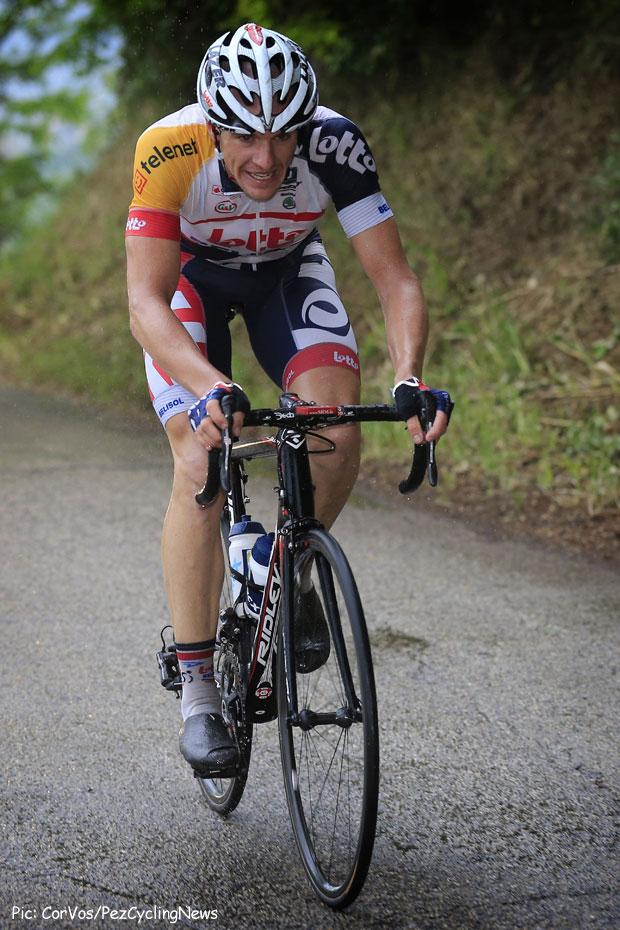 Homemade carbon shoes and super narrow handlebars, Adam Hansen has a style all of his own.

And He Goes!
On what seemed like the 100th climb of the day, but in fact was only the 2nd categorised climb on the stage, Adam Hansen went to the front of the break and put the hammer down. Turning over his gear with the smoothness that he has on the flat during an Andrei Greipel leadout, Hansen simply powered away from the rest of the break with only the dimunitive figure of Emanuele Sella able to hold onto the big Aussie on the climb. In a short space of time Hansen had destroyed the rest of the break and suddenly put both himself and Sella in with a real shot of winning the stage as at 35km to go they still had over a 3minute gap to the dwindling peloton.

Crash!
The Italian/Aussie duo worked well together until Sella came crashing down on the descent on the approach to a tricky right hander which Hansen managed to negotiate with no troubles. That was when Hansen had a dilemma on his hands. Wait for Sella? Go on alone? He called out on the radio to his team car but seemingly got no reply, asked the cameraman on the motorbike where was Sella, and even asked the commissaires until finally he saw Sella coming back up to him so he waited and the unhurt Sella was able to catch back on and continue their two man effort.

Meanwhile back in the pack the atrocious weather and relentless climbing and descending were taking their toll with the peloton getting smaller and smaller with each kilometer passing and Bradley Wiggins was looking dangerously positioned at the back of the pack over the climbs. Local boy, Danilo Di Luca was up for the stage though, bad weather or not and he sent out his lieutenant Taborre out on the attack. Taborre went out solo and was able to claw back some ground on the breakaway riders that had been dropped by Hansen and Sella but couldn’t make any inroads into the leading duo.

Smackdown on Chieti!
The super steep climb of Chieti was next on the agenda, the same climb that had been used at Tirreno Adriatco and done so much damage in that race and it was there on the steep ramps of up to 16% where big Adam Hansen put the smackdown on his 50kg Italian climbing companion. Sitting down and spinning his compact gear in a very fluid style in comparison to the out of the saddle Sella, Hansen rode away alone, looked around a couple of times at Sella to see him struggling and in a smiling grimace of pain, accelerated some more to widen the gap. Hansen’s climbing was superb as he started opening the gap over not just Sella, but also the peloton who were busy experiencing their own smackdown with Danilo DiLuca attacking and Bradley Wiggins struggling. 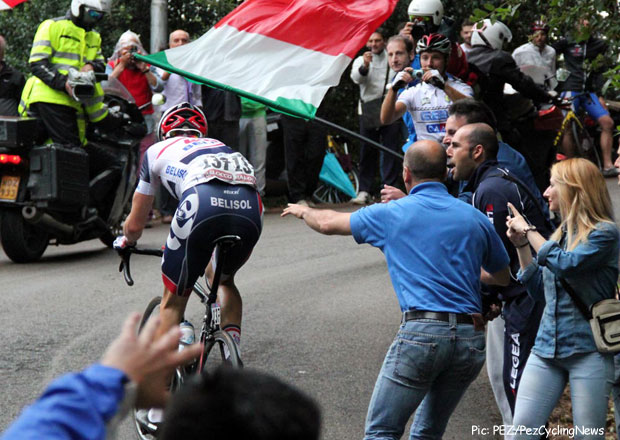 In fact the attack from Di Luca was quickly joined by another Italain veteran Scarponi, amongst others as the GC favorites started to relise that Wiggins was on a bad day. Blanco got to the front and shut down DiLuca’s attack for Robert Gesink but they continued to force the pace with Wiggins and race leader Luca Paolini both dangling just off the back.

Meanwhile upfront, Sella crashed again on the next descent in his desperate but futile attempt to catch Hansen. This scene of a lone rider crashing on the approach to corners or in the corners was to be a scene repeated by many big names including Vincenzo Nibali who went out on the attack on the descent in an attempt to distance not only Wiggins but the rest of the GC favorites, before he too came crashing down at speed. Nibali was quickly back up and on his way though and was safely at the front of the ever dwindling in size peloton as Wiggins was still off the back and desperately trying to chase back on when he too crashed on the descent!

It was luckily a fairly harmless crash from the look of things but it made a bad day even worse for Wiggo as after he remounted his moral and his descending confidence were both shot. The way he was descending was very poor as he had no confidence in the lines he was taking and the gap to the other big favorites like Nibali, Evans and Scarponi continued to grow. 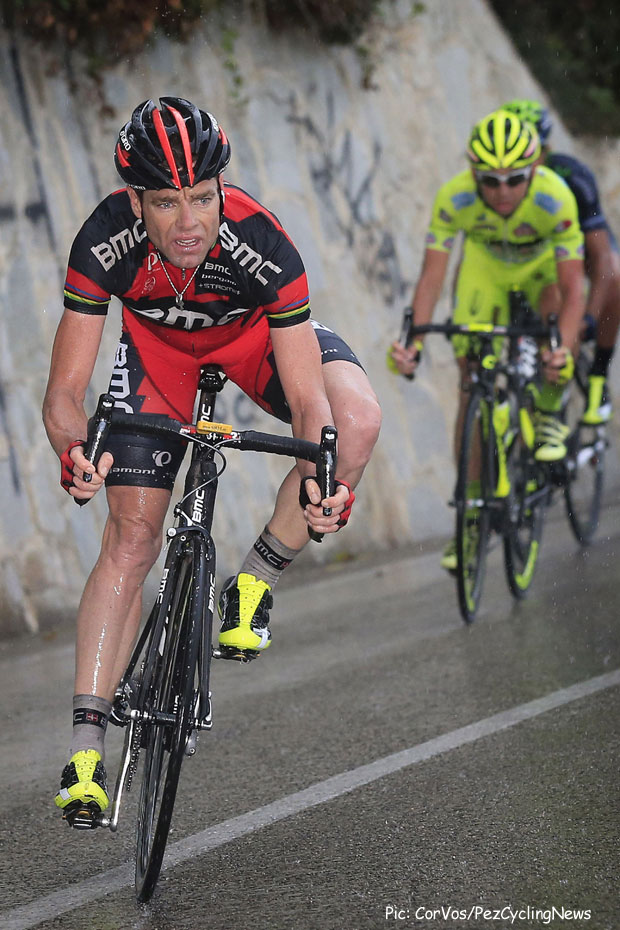 Nice Guys Don’t Always Finish Last
Despite all the attacks and pressure that was happening behind Adam Hansen continued to keep his gap over the chasing peloton and managed to keep it upright which seemed to be a feat in itself today. I counted at least 25 riders hit the deck at some point in mostly individual crashes over the last 80km, the conditions and the tricky descents were that difficult. 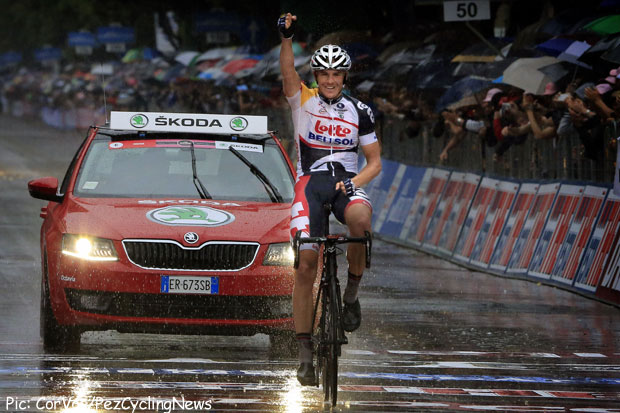 Rolling into the final kilometer the emotion of the biggest win of his life started to hit home as he raised his hands to the sky after a mammoth break and an extroadinary solo performance over the closing kilometers. So many times he’s been a part of sprint wins as a domestique for Cavendish, Greipel and co. but for once Adam Hansen took a win for himself and what a win it was.

Back in what was left of the peloton the battle for the remaining valuable bonus seconds and the time gained over Wiggins continued with Cadel Evans trying to make a good day for him even better by taking the sprint for 2nd but it wasn’t to be with stage winning hero, Enrico Battaglin (Bardiani Valvole-CSF Inox) taking 2nd ahead of local boy Di Luca with Evans coming in 6th and Hesjedal tenth in the same time.

Wiggins though came in over a minute behind in what is a big blow for his Giro chances ahead of the time trial tomorrow where Movistar’s Benat Intxausti will be last man off as the new wearer of the pink jersey. An action packed stage, a worthy winner and just another chapter in this incredible Giro. Keep it tuned to PEZ for photos, roadside reports, analysis and more coming soon.