Stage 1 is always a traumatic experience and today was no different with a crash riddled run into the seafront finish in Napoli. Mark Cavendish missed the carnage and showed his sprint power to take the first stage and the first Pink jersey of the 2013 Giro d’Italia in fine form. Crash or no crash though the man from the Isle of Man had the stage in his pocket.

The first stage of any Grand Tour is always a nervous affair, especially in Italy and especially if the stage has been designed for the sprinters. The 130 kilometres out and back from Naples has four laps of 16.3 kilometres with the 4th Cat climb of the Via Francesco Petrarca each lap, then eight flat laps of 8.1 kilometres before finishing on the Via Caracciolo-Rotonda Diaz. The second and third of the climbs count for the KOM, so there will riders looking for that early jersey. The first TV sprint comes with three laps to go, plus the sprinters will be fighting over the stage and the first Pink jersey, so lots to keep up the excitement.

Stage 1 preview and “Fly Through” from globalcyclingnetwork:

Flag Goes Down!
It was under blue skies and temperatures in the upper 20 degrees centigrade that stage 1 kicked off from Naples. As expected the start was fast and it didn’t take long for the first escape to make its way up the road. Movistar’s Giovanni Visconti got things underway and was joined by Cameron Wurf (Cannondale) and they built up a gap of 1:40 with 113 kilometres to go as they came back through the finish for the first time. Five other riders were a matter of seconds behind them, including; Guillaume Bonnafond (Ag2r-La Mondiale), Ricardo Mestre (Euskaltel-Euskadi), Martijn Keizer (Vacansoleil-DCM), Brian Bulgac (Lotto Belisol), Marco Canola (Bardiani Valvole-CSF Inox). Omega Pharma – Quick-Step and Agros-Shimano were in control of the peloton for their fast-men; Mark Cavendish and John Degenkolb.

On the second time up the Via Francesco Petrarca; all seven riders were together until Guillaume Bonnafond (Ag2r-La Mondiale) attacked at the bottom of the climb to gather some KOM points. It wasn’t his day though as Visconti came past him for the maximum points with Canola second and the gap was 2:15.

Through the finish and the lead had stabilised at just under 2 minutes and the riders in the break had words with Bonnafond to hold back or there would be trouble for him.

Lauren Pichon (FDJ) crashed on his own, as did Yaroslav Popovych (RadioShack Leopard), both needing the doctor and then a group of six also hit the deck with Alex Dowsett (Movistar) needing a bike change, but with no bad injuries.

Wurf was first over the climb as Bonnafond was second and Keizer was third, the lead was still just under two minutes.

Wurf had a sizeable gap dropping down to the Naples seafront again and had 1:23 on the break and 2:11 on the bunch with 79.8 kilometres to go. A bad crash in the finish straight with a handful of riders hitting a barrier, the worst affected was Pablo Urtasun (Euskaltel-Euskadi), who didn’t move from the ground for quite some time, Daniele Pietropolli (Lampre-Merida) was also delayed, but didn’t seem injured. Both eventually remounted.

The Australian: Cameron Wurf pressed on as the others in the escape group were being pulled back on the last time up the climb. At the top Wurf had 1:48 over the complete peloton, as it was all together behind. Down in Naples and through the finish the lead was two minutes and there were 65 flat kilometres to go after just over one and a half hours of racing at around an average of 42 kph.

As the race came into the last 60 kilometres, Omega Pharma – Quick-Step pulled off the front and the chase was down to Sky and Garmin-Sharp, they were keeping Bradley Wiggins and the Pink Ryder Hesjedal out of trouble.

50 K’s To go
Mark Cavendish’s OPQS team took to the front again to leave the 29 year old Cameron Wurf out front until it suited them; of course whatever happens today, tomorrow’s 17.4 kilometre team time trial on the island of Ischia will (probably) change all of that.

Wurf’s lead was shrinking and with 6 laps to go (47.7 kilometres) he had 1:35 ahead of a now relaxed bunch. The likelihood of the predicted sprint was progressing towards the inevitable as the sprinters teams had the race well shepherded, the lead came down to 51 seconds with 39 kilometres remaining and four laps to go.

Into the last 30 kilometres Wurf’s lead came under half a minute as riders in the peloton were slipping on the smooth tarmac, one of the Omega Pharma – Quick-Step riders missed a tight corner, sliding under the barrier and Rigoberto Uran from Sky needed a new rear wheel.

Through the finish with 3 laps to go and Cameron Wurf could be seen 24 seconds ahead and it was now just a matter of time before he was caught, he did take the TV sprint for a 5 second GC bonus and some money for the team coffers.

Wurf’s Day is Over
Cannondale’s Cameron Wurf was brought back into the peloton with less than 20 kilometres to go and more teams came to the front for the sprint. Blanco, Vini Fantini-Selle Italia, Sky, OPQS, Argos-Shimano and Lampre-Merida were all pushing and shoving for the prime position.

The Last Lap!
8 kilometres remaining and the speed went through the roof to the sound of the bell. One long line was stretched behind an Orica-GreenEdge arrow; OPQS had disappeared from the front. Into the last 3 K’s no team was in complete control, although Cannondale looked good for Elia Viviani. A big crash split the bunch in the last 3 kilometres with Cannondale and Orica-GreenEdge on the front of a small group, around 15 riders, with Cavendish at the back. From that lucky group of riders who didn’t fall in the crucial crash; Mark Cavendish powered ahead of Viviani with French champion Nacer Bouhanni (FDJ) on his wheel in the last metres. Viviani knew he was not fast enough and punched his handlebars hard as Cavendish crossed the line with his arms held high. 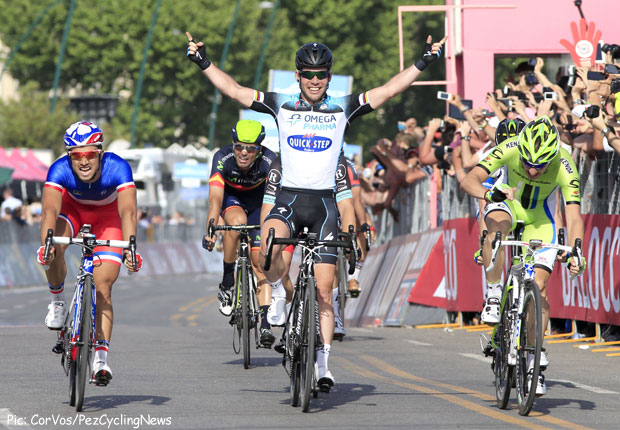 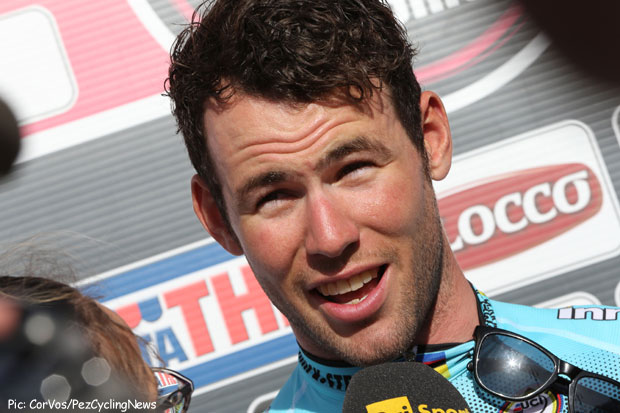 Mark Cavendish said after the win: “It was a difficult stage for me, it was not an easy stage with all the corners and the mechanical problem caused us a problem again. I wanted this so much, my friend Paul Smith, who designed the jersey, is here and I promised him I’d wear it.”

In usual Cav style he let an expletive slip from his lips when a troublesome ear piece wouldn’t say in place, but it wouldn’t be Cav without the odd “F” word.

Keep it tuned to PEZ for all the Giro action and the unique roadside reports from our guys on the barriers.

Jan Hirt Solos to the Win in Azerbaijan

OPQS Giro D’Italia Blog Now Online! Closer to the Team Than Ever Before!