Analysis: Stage 5 of the 2014 Giro d’Italia offered the first significant taste of climbing and the first uphill finish of the race. The climbs at the end of the stage – actually two ascents of the same climb – weren’t very steep nor very long, but nevertheless they whittled the lead group down to about 30 riders and set up an exciting finale between the stage hunters and the overall contenders.

By Jim Rutberg of Trainright.com

Although the stage ended up much the way team directors and race commentators predicted it would – a sprint out of a select bunch of about 30 riders – the weather again played a significant role in the outcome. 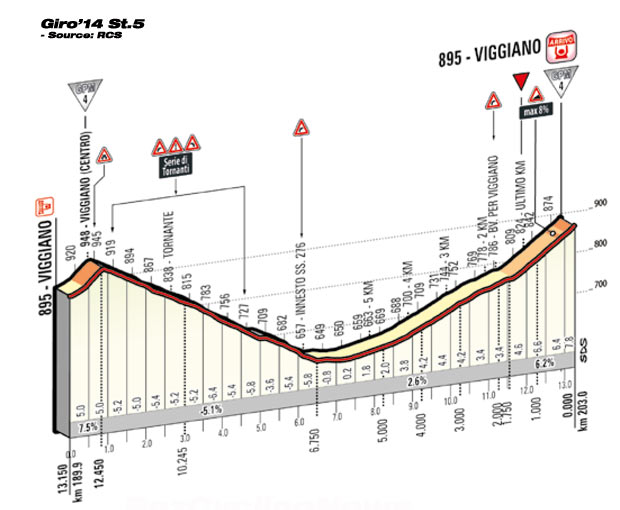 The stage boiled down to a wet descent and two climbs of the final ramp.

The peloton spent a hefty portion of the stage riding into a stiff headwind, and they encountered rain showers on the day’s larger climbs. For the overall contenders it was a day to stay protected in the main field, a task that is not always easy in big headwinds. While it’s relatively easy to stay in the draft, the peloton tends to bunch up in big headwinds and that increases the likelihood for crossing wheels or being pinched by a sudden narrowing of the road.

Coming into the final hour of the stage it was clear that even with 11 riders in the day’s long breakaway, the peloton had them easily within their grasp. With Orica-Greenedge setting the pace on the front of the peloton in defense of Michael Matthew’s pink jersey, the breakaway dangled about 30-60 seconds out in front leading into the penultimate climb to Viggiano. 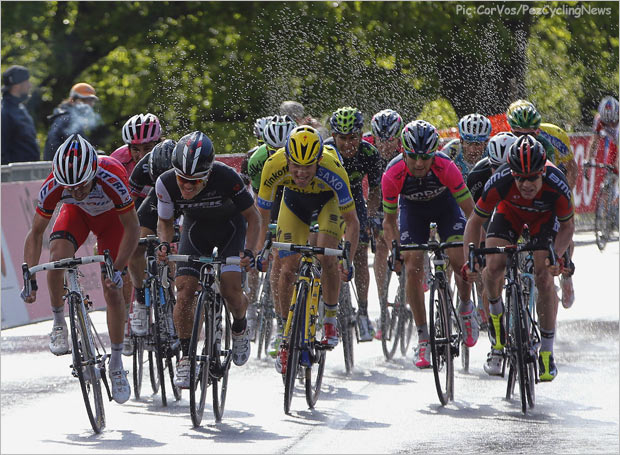 Rain and Risks
As the rain started falling and the peloton came back together, the biggest question was how to manage the risks of the day. To stay out of trouble the overall contenders moved near the front on the peloton, with Cadel Evans marshaling his BMC team to set the pace. The descent, however, is where we saw risk management in real-time.

They say fortune favors the bold, and Omega Pharma-Quickstep’s Gianluca Brambilla threw himself down the technical and wet descent in a big for a stage win. Behind him, the gaps started opening up as riders gave each other more room to account for slick roads. Among the lessons on offer for amateur cyclists watching today’s stage, it was notable that while two riders crashed on the descent, no one else came down with them. Giving riders more room on a slick descent means you’ll have a better chance of avoiding them if and when they fall in front of you. Great skills paid off for Brambilla and he opened up a lead on the descent, but that lead started falling rapidly as the final climb began.

The Final Climb – Unrolling like a carpet
Since the final climb was neither very steep nor very long, it wasn’t a great opportunity for overall contenders to make their mark. It simply wasn’t difficult enough to force a selection that would be worth the effort required to gain only a few seconds. However, with the peloton whittling down to only about 30 riders, the overall contenders had to show a bit of their climbing form and their eagerness to hit the throttle. 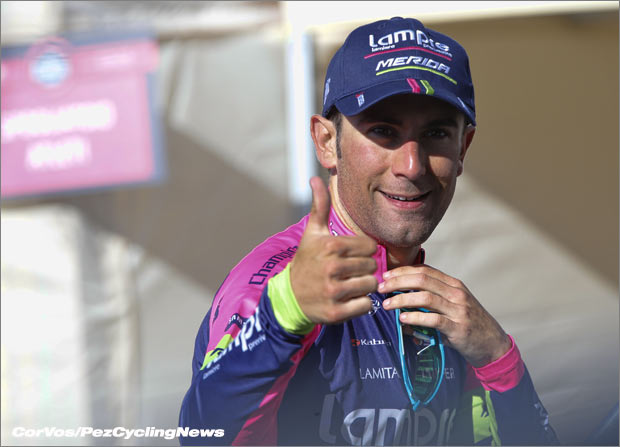 From the bottom of the climb, Katusha took charge of the peloton. Perhaps Joaquin Rodriguez wanted to see if he could recoup some of the time he lost in the team time trial, or he just wanted to go for a stage win on a finish that was well suited to his explosive acceleration. Katusha rode the climb like a carpet unrolling, ratcheting up the speed and pressure as they went. It’s a strategy that works great if you can pull it off, because the speed prevents anyone from attacking. Unfortunately, the speed may also have been too much for Rodriguez, because when it was time to finish it off and repay his teammates for their massive effort, he either didn’t have the legs to do it or his final leadout rider dropped him off a bit too early. Instead, it was Diego Ulissi who unleashed a great and perfectly timed surge for the stage win. Notably, it was Cadel Evans who put in a real acceleration to finish second, with Rigoberto Uran crossing the line in fourth and the same finishing time.

Ulissi played it smart. He told interviewers after the stage that he’d been hiding in the draft all day. With the wind and the rain and a front group comprised of a mixture of stage hunters and pink jersey contenders, the wisest strategy was to conserve energy for one major surge within sight of the finish line. In the long-term battle for the pink jersey nothing at all was won or lost today, but Evans and Uran were both strong, attentive, and eager, which is important for showing their teammates and their rivals that they’re here to race.

Jim Rutberg is a Pro Coach for CTS and co-author of seven books on training and sports nutrition, including “The Time-Crunched Cyclist”. During the Giro d’Italia he will be providing commentary and analysis of key stages, with an eye toward explaining why or how the action happened and what it means for future stages. For information on personal coaching and training camps from CTS, visit https://trainright.com.
Like PEZ? Why not subscribe to our weekly newsletter to receive updates and reminders on what's cool in road cycling?