Roadside: It rained a bit, the sun shone a bit but the weather didn’t really matter. It was the crowd which did the emotional damage, and more or less brought Nicolas Roche to tears at the 2014 Giro d’Italia team presentation. Belfast offered the warmest of welcomes to the biggest sporting event of its kind in the country’s history. 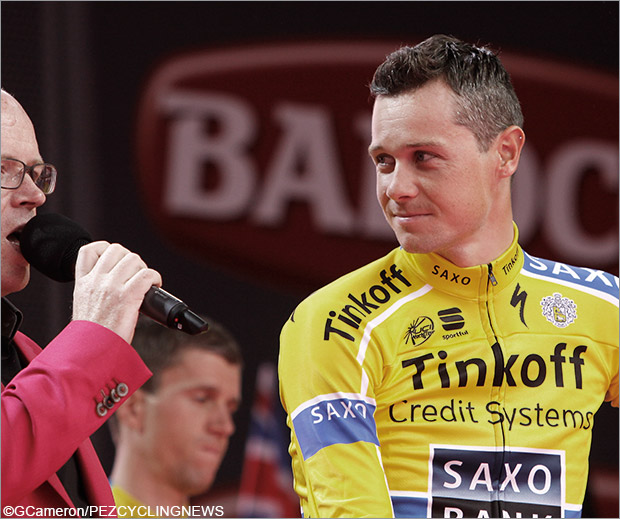 “It is just unreal…I am so happy that they let me ride the Tour of Italy. I am so happy and so proud to be here among you guys.” Roche, the Tinkoff-Saxo rider, is the ultimate advert for Europeanism – born in France; educated in Dublin; lived in Switzerland, Monaco and Italy. But the roar when his name was announced, when he rolled up the pink carpet to the stage, sounded like the heralding of a long lost rock music legend. Roche’s father once told me that he felt 100% Irish and 50% French. Nico looked 100% at home tonight. 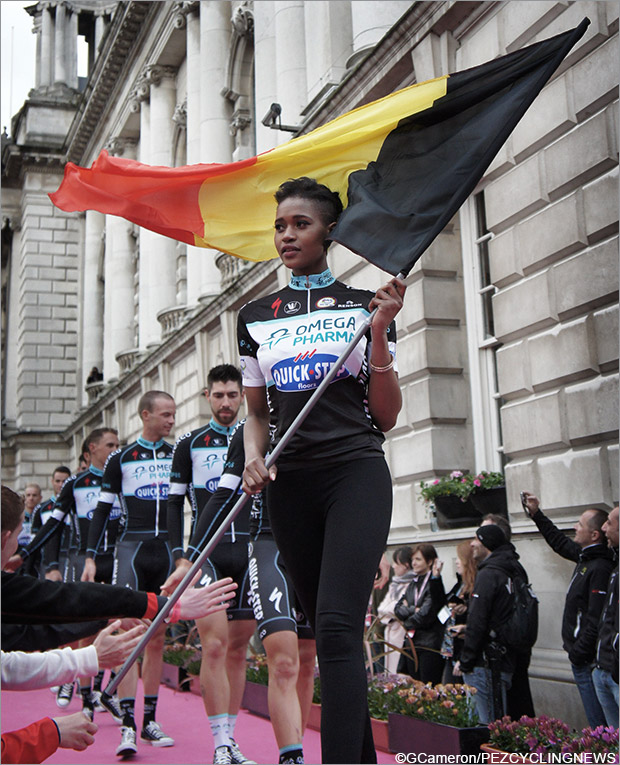 Bringing the Giro to Northern Ireland is about emphasising a new, international, presence for a country that seemed for far too long to be mired in its own, endless inward spiral of self-destruction. This is much more than a bike race for the communities of the north … 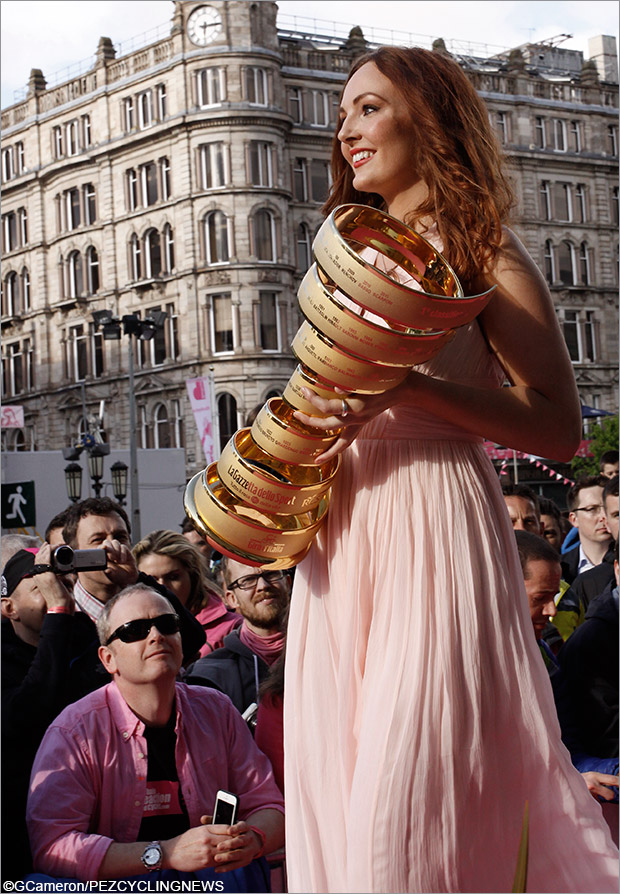 Donegall Square offered a backdrop that matched up to pretty much any European city … a stunning town hall and imposing grey buildings just south of the Cathedral Quarter. The sun flitting in and out. The Trofeo Senza Fine floats toward the stage, and thousands of heads turn to watch it pass. It sits like a beacon to the riders, who all cast a glance at it. Some will have real hopes of holding it for themselves in Trieste in three weeks time. 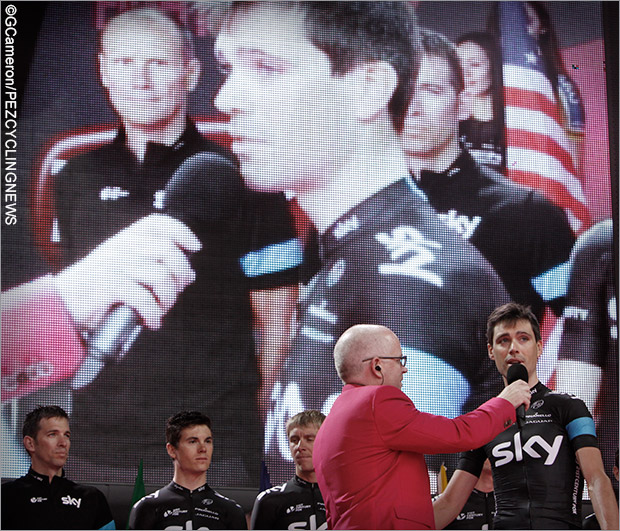 Donegal’s Philip Deignan travelled down to Dublin in 1998, and what he saw inspired him to try and become a professional rider: “I never thought I would see the day when I would be able to start the race in my own country so it is amazing.” Now riding for Team Sky, Deignan might well be inspiring the next generation of Irish cycling musketeers.

French, Italian, Spanish riders … they get multiple opportunities to race a home Grand Tour, but for Roche, Deignan and Dan Martin, such a luxury is unthinkable. 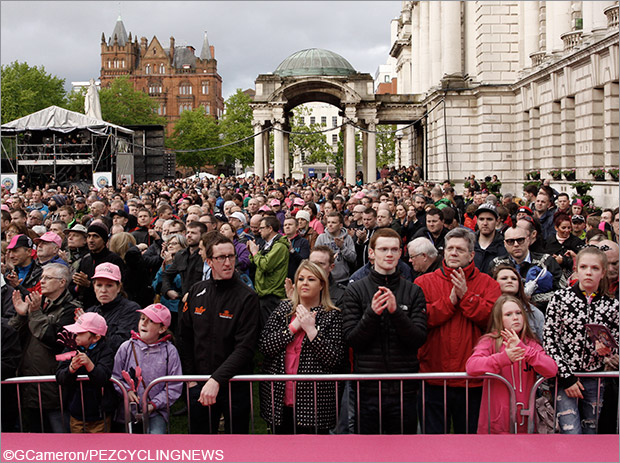 Another rider who might get a home start, but rarely, got one of the biggest cheers of the night. Marcel Kittel, the Teutonic icon, is as popular for his personality as for his sprint, as lauded for what seems like the proper approach to clean racing and the willingness to speak out against the old ways. 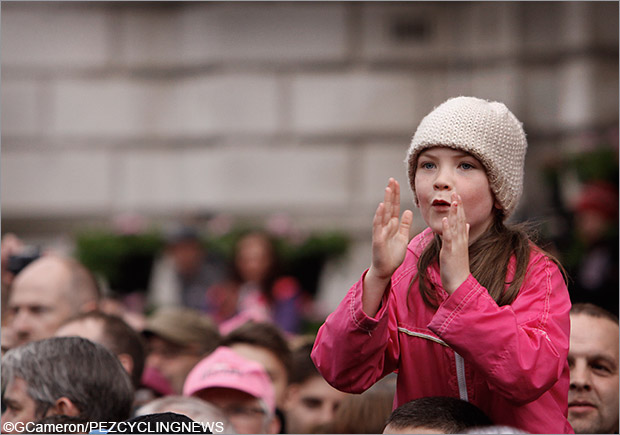 Kittel almost got hauled off his bike by one guy who wanted a handshake rather than a high-five, but took it all in good humour. And it was the kids who cheered him loudest. 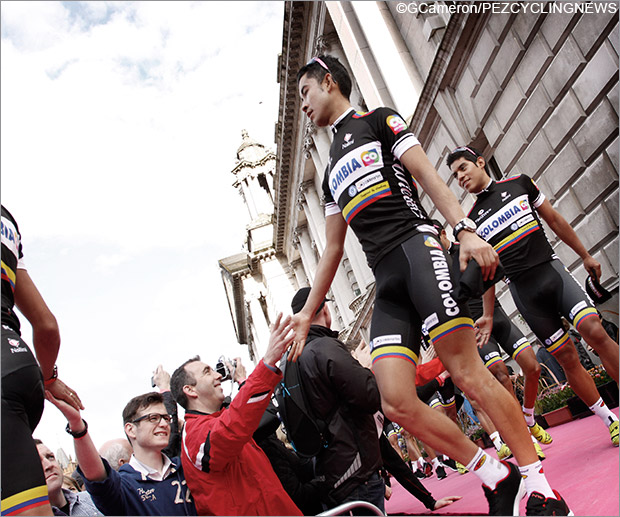 Despite the visa problems that almost derailed the Colombia team’s participation, now that they’re here in Northern Ireland, the South Americans are having a whale of a time. Some of the podium caps got launched into the crowd as they took the pink highway to the stage. 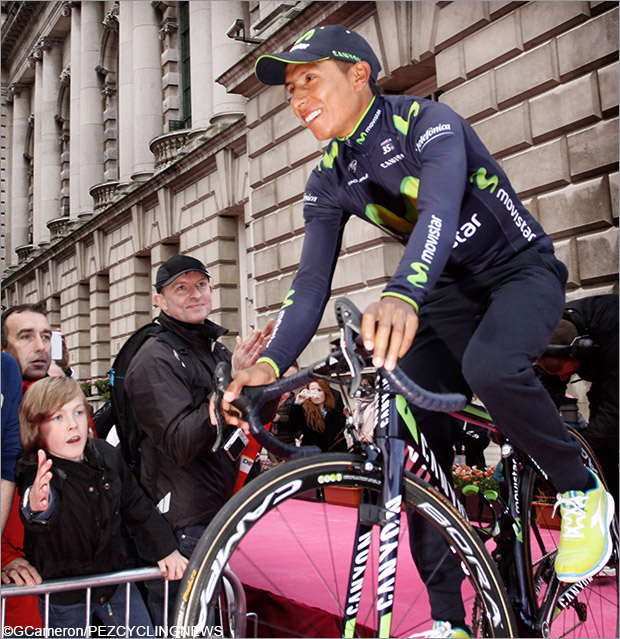 Their fellow countryman Nairo Quintana (Movistar) is a hot favorite for this year’s Giro, and the perma-smiling little climber was one of the few stars to put his cards on the table tonight. No pussyfooting around with talk of the podium, doing the best possible, etc. Quintana is here to win. 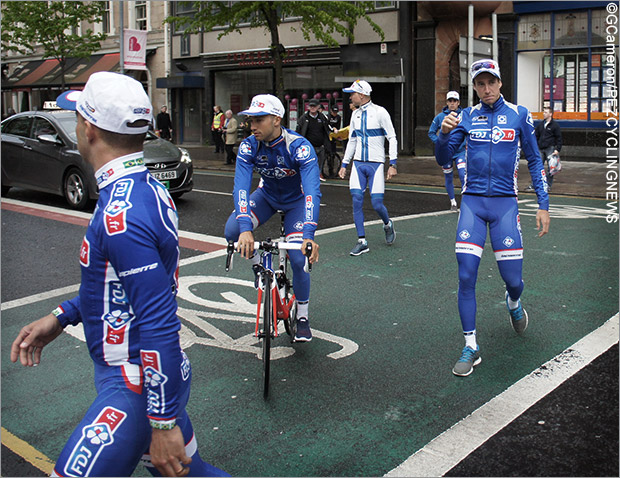 The FDJ boys casually meandered their way towards the presentation, taking the junction of Donegall Square South and Bedford Street with a debonair cool that would have got me a mouthful of abuse from passing cars. They have Nacer Bouhanni for the sprints, and he’d better do the business because his team-mate Arnaud Demare is racking up the wins in Dunkirk. 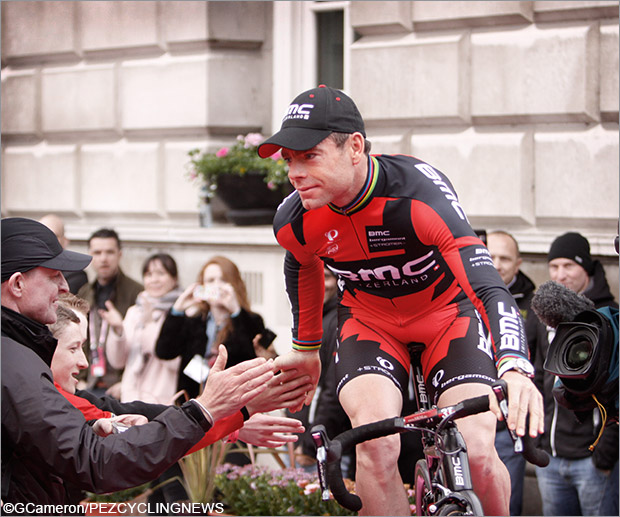 Although he bristled a little at the implication that he hasn’t got many Grand Tour chances left, Cadel Evans got a massive welcome, too. He’s always done a good Giro, pulling on the maglia rosa in 2002, winning an epic stage and the points jersey in 2010. He admitted that he was targetting the podium, but which step …? 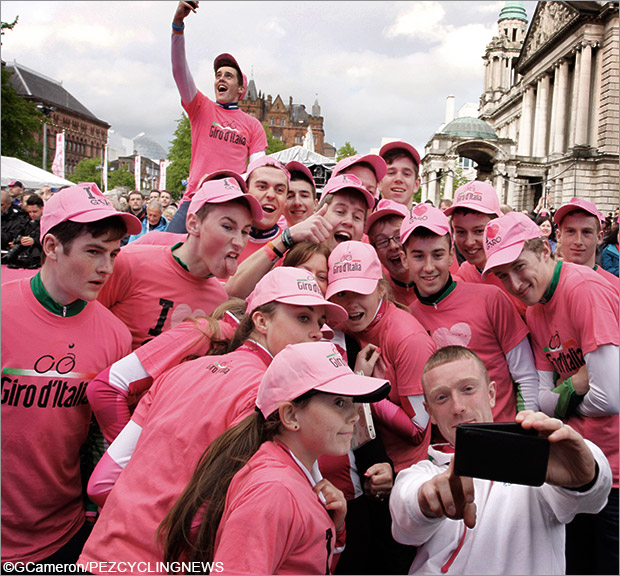 There was all manner of japery going on after the riders took their leave, with the volunteers who’ve put in so much effort to help launch the Giro piling in for a mass selfie. Pink lycra jumpsuits are tricky to get right at the best of times but the Flavor Flav-a-like leading the breakdance group on stage deserves a medal. 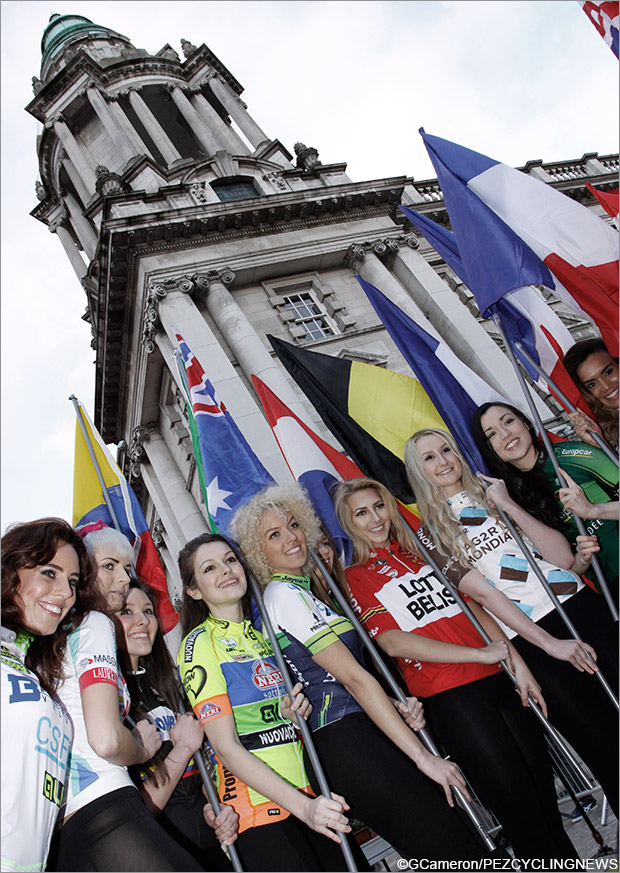 One of the glamorous models toting the national flags suffered a stilletto heel-related injury, and no wonder as the rain slicked the steps off the stage. The ambulance crew in attendance you’d expect, but the number of concerned onlookers (all male) was exponentially greater than the damage done. She got up and hobbled away as her colleagues threw shapes for the cameras. If one of the riders had come a cropper we’d have had an international incident on our hands. 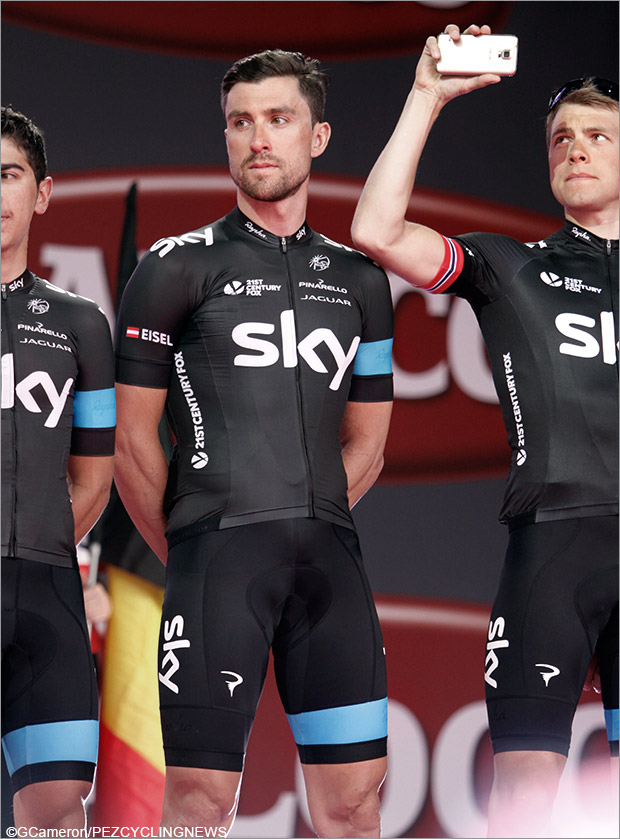 Bernie Eisel was busy taking on-stage selfies while Edvald Boasson Hagen was snapping the crowd. There was some surreptitious camera work from Omega Pharma-QuickStep’s Rigoberto Uran as he headed for the stage, following on from the press conference yesterday. 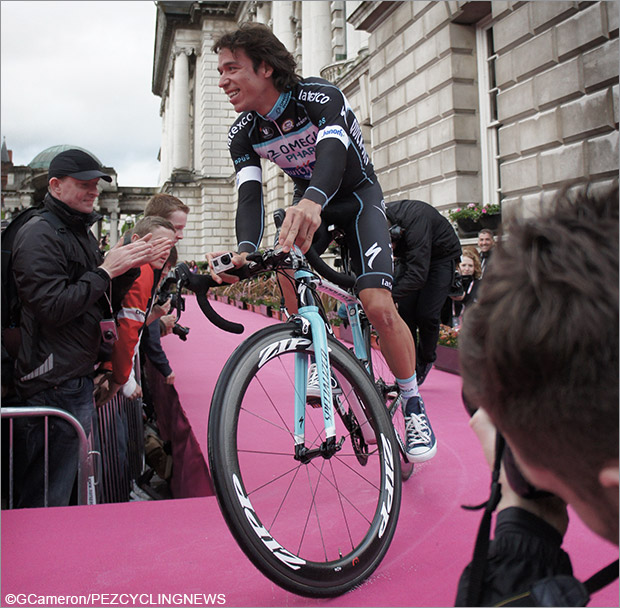 Ryder Hesjedal ambles to the stage. There’s a lot of water under the bridge since he won the Giro back in 2012, and his stock isn’t quite what it was. The Garmin-Sharp team are relaxed though, as Farrar and Dekker take the stage with youngsters like Haas and Van Baarle, and even Fabian Wegmann, one of the unlikeliest Giro Kings of the Mountains. Those guys will be busy making sure that their captain is in winning position over the next few weeks. 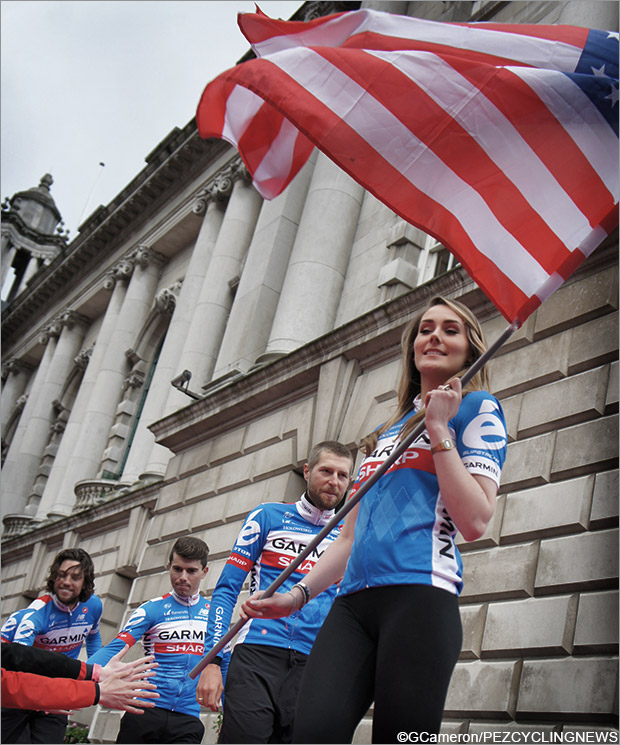 The only team leader not to risk riding to the stage is Dan Martin, who prefers to offer the fans the maximum amount of high-five interaction. The final head of the home trinity at this Giro works the crowd like a music hall veteran, telling them how great it is that Belfast can show the Europeans how to do a proper team presentation. 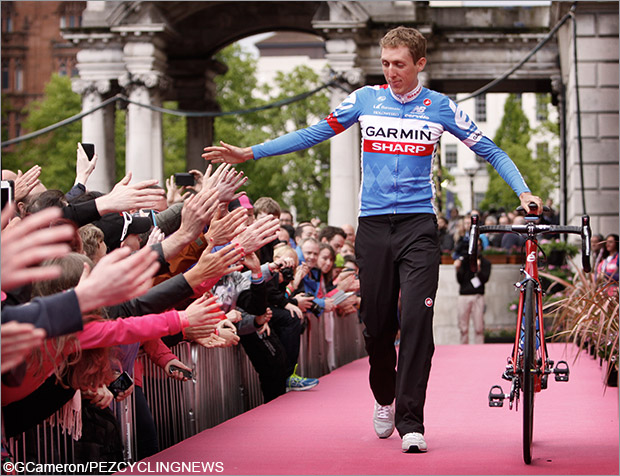 It’s Northern Ireland’s team presentation, but this Giro is about bringing north and south, bringing communities, together. So, it doesn’t matter that Martin was raised in England, that Roche was born and raised largely abroad. They’re home heroes, even more so for the next three days. This is a Giro starring Irish riders, for Ireland north and south.

Experience even more for the finish of the Tour de France!