Race Report: Today was always going to be one for the sprinters, but the run in to the finish was not easy or safe with a little climb and a crazy descent to the line. The Sky team and crashes nearly ruined the day for the Giro King of Sprints, but Nacer Bouhanni managed to come through and win again.

After the brave Italian duo of Marco Bandiera (Androni Giocattoli) and Andrea Fedi (Neri Sottoli) were reeled in after a long day out front; the race went crazy as the Sky team drove hard on a small climb before the finish. They did manage to stretch the peloton the breaking point, but a big crash on the technical last kilometres managed to finish some rider’s hopes. In the end FDJ’s fastman Nacer Bouhanni came out on top again. 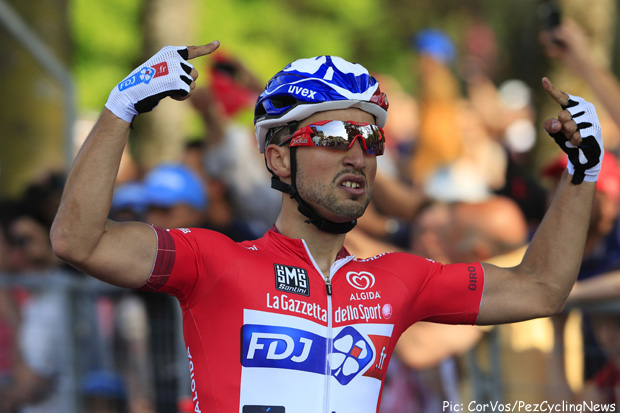 Modena to Salsomaggiore Terme, 173 km
The road from Modena to Salsomaggiore Terme is flat, but just after Fidenza there is a slight uphill gradient that leads to Bagni di Tabiano (10 km to go), where a short climb is followed by a fast, and technical descent to the finish. The last 3 kilometres include roundabouts and sharp bends and the final straight is only 120 metres long and is 7.5 metres wide on asphalt. So it’s a sprinter’s stage with a good bit of danger thrown in. The last winner in this area (Parma) was Alessandro Petacchi in 2011 when he outsprinted Mark Cavendish.

The Giro d’Italia’s Colombian riders were wearing a white ribbon made into flowers today in memory of the schoolchildren who died yesterday in a bus fire in the town of Fundación. 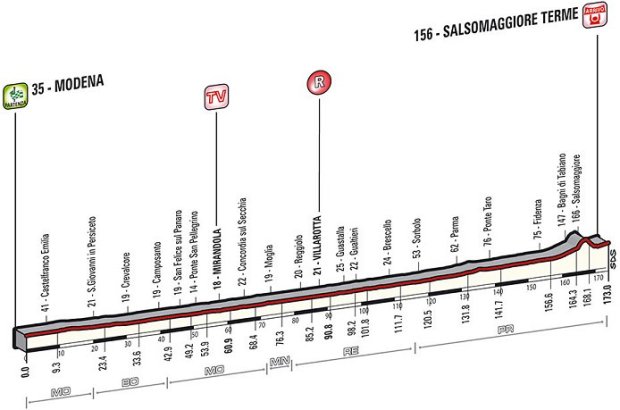 The Very Early Break
After only 15 kilometres of racing Marco Bandiera (Androni Giocattoli) and Andrea Fedi (Neri Sottoli) had a lead of 9 minutes and no one was very interested in chasing them down. This morning Bandiera was in 150th place at 1:23:13 and Fedi is 169th at 1:29:16, so neither is a GC worry, but Bandiera is leading the sprints competition from Fedi by 2 points and Fedi is leading the most aggressive classification from Maarten Tjalingii (Belkin) with Bandiera in third.

After 50 kilometres the lead had dropped to 6 minutes, both were very interested in the special sprint in Mirandola at 60.9 kilometres. Fedi led into town and moved over to let Bandiera do his turn and it all looked very amicable as they swept on to the wide road for the sprint. Bandiera moved to the front and Fedi didn’t have a chance.

Back in the peloton FDJ.fr, Giant-Shimano and Trek had control, but Cannondale pushed through to lead Viviani to the line for 3 points. The points leader Nacer Bouhanni (FDJ.fr) had lost his lead-out and was a bit marooned and so didn’t get any points.

100 K’s to Go
Coming into the last hundred kilometres and the two up front had a 5 minute gap, but with the feed zone coming after 90 kilometres, they were bound to gain more time. FDJ.fr and Cannondale were again riding on the front, but no one was showing much interest in a proper chase.

When Fedi and Bandiera got to the ‘Rifornimento’ in Villarotta their lead had built up to 6:40, but after lunch the bunch started to ride with Omega Pharma – Quick-Step joining the chase and the gap to the escape dropped below 5 minutes. 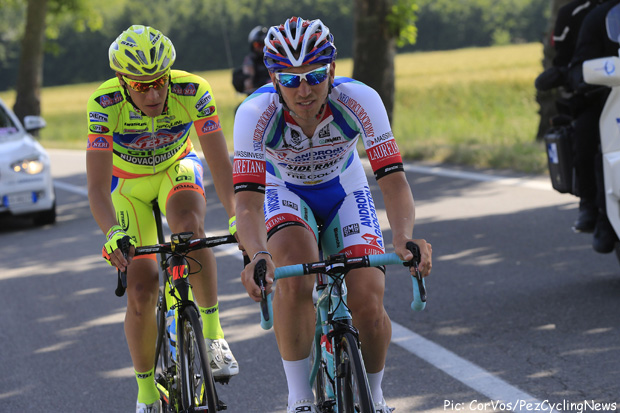 50 Kilometres to the Line
With 50 kilometres still to ride to Salsomaggiore Terme the Feri/Bandiera tandem had been pulled back to 3 minutes. It was looking like the break would be over too soon, so the chase eased off just to leave the pair out front a little longer.

Into Parma and the crowds were out in force to watch the two-up break come through 2:50 in front of the peloton with 37 kilometres to go.

25 Left
Trek came to the front for Giacomo Nizzolo as Omega Pharma – Quick-Step moved back from the front and the lead had again risen to 4 minutes. FJD.fr by this time thought it was time for the work to start and the lead fail; Giant-Shimano, Orica-GreenEDGE also started to lend a hand.

In 5 kilometres one minute and fifteen seconds was shaved off the lead as FDJ’s Finnish champion Jussi Veikkanen took a long turn. Further back in the peloton BMC’s Yannick Eijssen hit the deck and it didn’t look good as he lay in the road, obviously in pain and was eventually taken away in the ambulance.

13 kilometres out they only had 1 minute in hand, Fedi was still keen to stay out front, but Bandiera could see there was no point and didn’t want to come through. And into the last 10 kilometres they had 23 seconds as they started the small climb.

The End of the Break
Fedi and Bandiera shook hands and sat up to be caught with 9 K’s left. Sky and BMC hit the front to lift the pace; Sky for Ben Swift for the sprint and BMC keeping the pink jersey of Cadel Evans safe.

Dario Cataldo gave it his all on the rise with Edvald Boasson Hagen on his wheel. Boasson Hagen hit the front hard, but this jettisoned Nico Roche up the road, but he sat up when he saw no one was coming with him.

Onto the descent and Boasson Hagen was leading as the race streamed in to Salsomaggiore at high speed causing many splits in the bunch. Bouhanni and Viviani were nowhere to be seen.

The peloton was like a long string, although Bouhanni and Viviani made it back to the front, but they didn’t have many riders with them. Sebastien Chavanel was on the front into the last kilometre keeping the pace high for Bouhanni, then a crash on the last corner involving Tyler Farrar split the bunch bringing down quite a lot of riders and delaying even more.

Trek’s Giacomo Nozzolo hit the front early with Bouhanni and Michael Matthews (Orica-GreenEDGE) on his wheel. The Frenchman seemed to have another gear and passed Nizzolo for another stage win. Behind the flying Frenchman there were many gaps due to the speed and the falls, but there would be no time penalties for the GC men as the crash was in the last kilometre. Cadel Evans finished 9th and easily defended his overall lead. 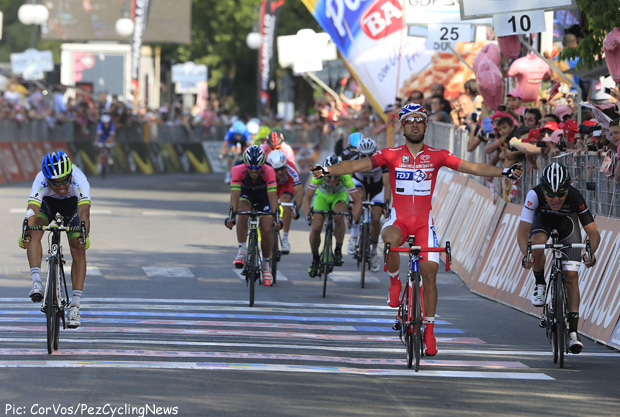