Stage Report: Michael Rogers produced arguably the greatest ride of his life to become only the fourth man to win on this ultimate test of courage and climbing ability that is Monte Zoncolan. It was a truly monster stage and a great way to end the Giro in the mountains.

Rogers was the last survivor of a big, day long break whilst behind maglia rosa Nairo Quintana (Movistar & Colonbia) was never troubled as Rigoberto Uran (QuickStep & Colombia) also comfortably defended his second spot on the podium.

Young Sardinian Fabio Aru (Astana) was expected to challenge Uran for second but in the end was happy to defend his third spot on GC after he felt the bite of the evil Zoncolan on his slim thighs. 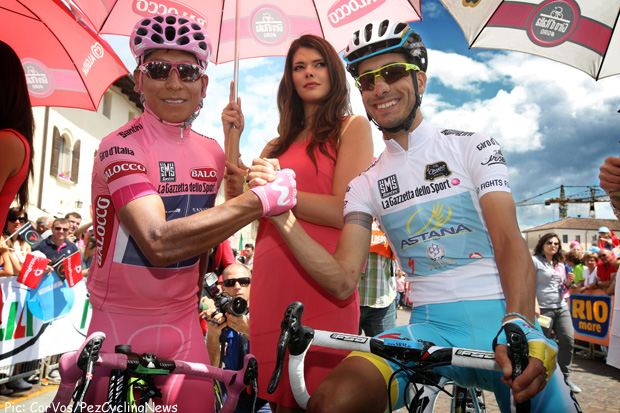 How It Played Out
The stage today is all about one thing – The Zoncolan: there are three possible approaches; the stage today takes the hardest one (naturally) from the Ovaro side. 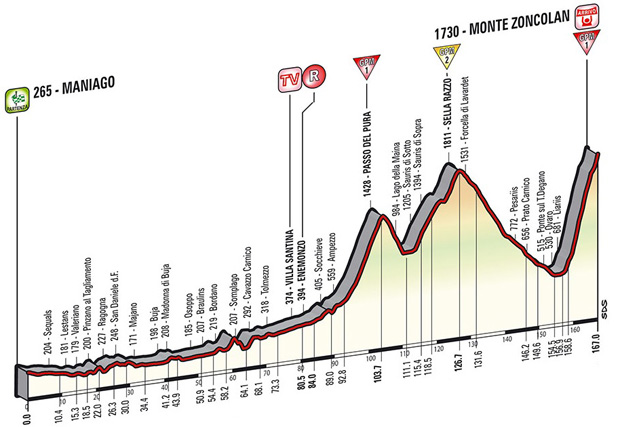 From the town to the summit some 10.1 kilometres away the road rises 1200 metres; bear in mind that yeterday’s mountain time trial’s elevation was 1589 metres but that was over double the distance so that will give you an idea of the gradient.

But first, there are two ‘lesser’ climbs to contend with:

Cataldo took the points at the top as the big group splintered and on the descent, despite Movistar being nowhere near ‘full gas,’ the peloton initially looked very much like it wasn’t going to let the break get too far away. Mick Rogers dreams of a second stage win looked to have ended on the descent – a mechanical left him shrugging his shoulders by the roadside.

The second climb, the second cat. Sella Razzo comes straight off the Pura descent with 15 of the original 19 breakaways still in contention as the break’s gap stretches a little with Movistar riding tempo and in no rush, it would seem.

Ahead, some dream of the stage win and some of just being ahead at the foot of the Zoncollan to help beat the time cut. Rolland rallies his Europcar troops and all of a sudden there’s urgency in the peloton as up ahead Simon Geschke sets the pace in the break.

Lotto’s incorrigible attacker, Tim Wellens and Colombia’s Robinson Chalapud make it across to the break and Mick Rogers has made it back too. Europcar are driving hard – they know that the descent off the Sella Razza will favour the break more than the peloton.

Cataldo takes the points as the break breasts the summit and begin the fast drop to Ovaro. Rolland (Eropcar) makes a move with Pozzovivo (AG2R) and whilst Movistar don’t go crazy in reply, the peloton has shredded – but it should regroup on the descent.

Bookwalter and Monsalve head the break downwards on nice dry tarmac as behind Movistar have snuffed Rolland and Pozzovivo and lead the long plunge off the mountain. The break has eight minutes after the long, long drop to the valley floor – is it enough?

Zoncolan – narrow to start with but it widens; it’s steep immediately though with Wellens leading – there’s nothing like this in Belgium, Tim. Movistar drive the peloton into the climb; Fran Ventoso has made the transition seamlessly from sprinter to case hardened road captain. Hondo slides serenely backwards from the break – without any attempt to jump the peloton.

Quintana’s already off the front, nice work by Movistar – but it’s too early and the ‘Telephone Team’ cool the beans. The little Colombian has four team mates with him so no need for panic.

Geschke leads the seven survivors of the break as a maniac dressed as a bride in white runs alongside. Movistar are stoking the fires, Rolland is there, impassive – if he wants the podium there’s only one way to get there.

Ahead it’s those Bardiani boys at it again as Bongiorno leads from Pellizotti and the remarkable Rogers. Trek’s Kiserlovski drives as Hesjedal and Basso find the rear exit.

Rogers takes it up in the break; Bongiorno looks cool, ‘Pello’ less so. Rogers looks very good but there are still five K to go – and he’s been away all day.

Behind only the best are left – Quintana, Pozzovivo, Rolland, Uran, Kiserlovski, Aru, Majka, Poels as Kelderman begins to slide. And Evans has gone.

It doesn’t look like Aru’s day; he’s too near the back to be a man on a mission. Igor Anton kills himself for Quintana – he’s won here before so knows what it’s all about. The crowds are huge as Rogers and Bongiorno fight their biggest sprockets skywards.

Quintana is impassive, even as an idiot Colombian fan tries to push him. Uran barks at team mate Poels to ride; the Colombian can smell the fear from Aru – Poels digs deep and puts the hurt on himself. Bongiorno digs deep too, further up the mountain, but Rogers is impassive and as comfortable as a man can be in this purgatory.

Quintana, Uran and Poels have distanced the rest – Pozzovivo tries to haul them back, Majka marks him as Rolland and Aru can do little but hang there. Rogers rides smoothly, calmly as yet another imbecile fan pushes Bongiorno into the Aussie’s back wheel; the Italian has to unclip and does well not to crash.

Rogers doesn’t need to be asked twice and accelerates as Bongiorno tries to regain his composure – very hard to do on this wall. 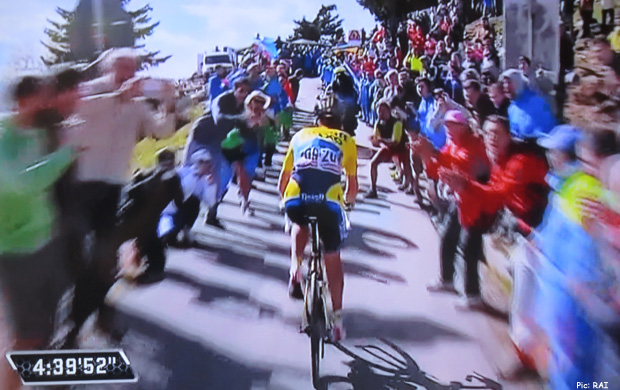 Poels is earning first turn on the massage table this night; as ahead Rogers has to push and scream a way through crazed fans. QuickStep have another ally as Serry comes back from the break to spell Poels and Uran; lovely team work. Poels cracks, he had to, no man can ride like that for too long.

This looks like it belongs to Rogers as Bongiorno slides backwards to Pellizotti – only a puncture, broken chain or idiot fan can stop Rogers.

The crowd at the top is huge as Rogers rides the final, wet hairpins, rising out of the saddle where he has to, he kisses his ring, swings his arm – he wins. 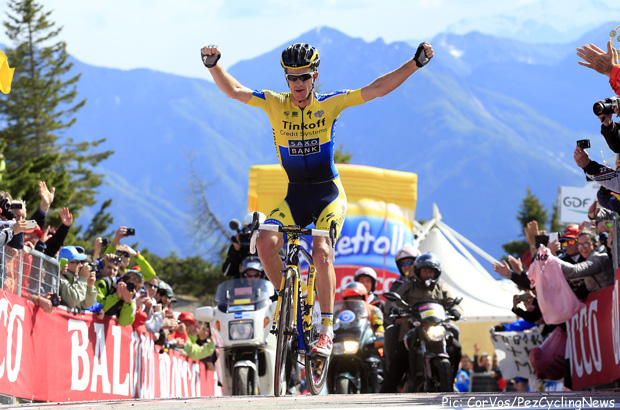 Oleg Tinkov himself is there to catch and cuddle his boy – fabulous images and emotions. 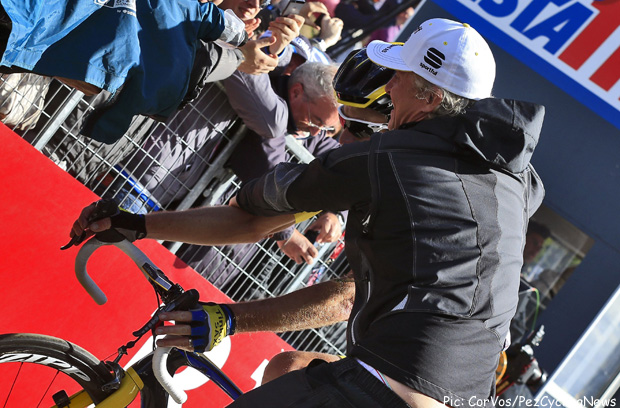 The break survivors battle in as the ‘Biggest’ two ride side by side to the line – Uran and Quintana. Another wonderful image, spoiled by I feel by Quintana sprinting – he’d have gained more respect by allowing Uran to be first across the line. But that’s just my opinion. 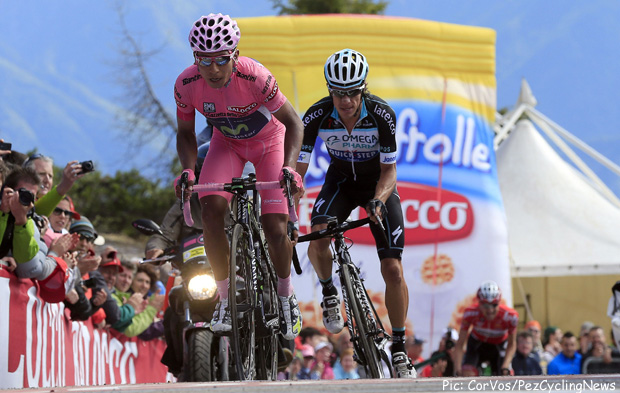 Majka, Aru, Rolland, Pozzovivo follow. But Uran will be happy, he knew that Quintana was untouchable, his worry was Aru – and he’ll be satisfied with his day and the job his boys did.

Evans has crumbled and so has Hesjedal – but they’ll both remain top ten on GC.

A fabulous penultimate chapter to the 2014 Giro d’Italia manuscript; written with passion and love by a golden nib on the finest of pink parchments.

What a stage, what a Giro, what a sport!