Race Report: Yet another wet day greeted the Giro d’Italia pelotón, but this time actually in Italy. After the riders had made the decision not to race too hard due to the dangerous conditions, the last lap was contested by those who were interested, or still upright, and the tough Frenchman Nacer Bouhanni splashed across the line first. Michael Matthews kept the Pink jersey.

Not the best of Giro stages, but in the end a top sprinter won a sprinter’s stage. As was proven by the last lap crash the riders were right to hold a go slow today. Maybe the racing could have been more exciting, but we don’t want to lose any more riders.

Giovinazzo – Bari, 112 Kilometres
The Giro is back on home soil for its 105th birthday on stage 4 for a short and easy stage on the South East coast of Italy. Seven kilometres after the start in Giovinazzo there is an uncategorised climb of about 100 metres, from then on the course is made up of nine 8.3 kilometre flat circuits with a special sprint at the end of the 5th lap before the final battle for the line in Bari. 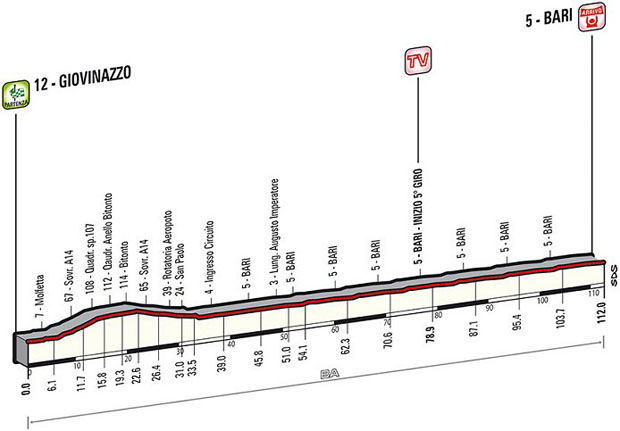 The Start
14:45 CET is a late start, but seeing that the stage is so short and everyone had to get there from Ireland it all makes sense. The weather forecast for the day is for 23ºC, light winds and there is a high possibility of showers, in fact it was raining at the start, but nothing like the first three days in the Emerald Isle. 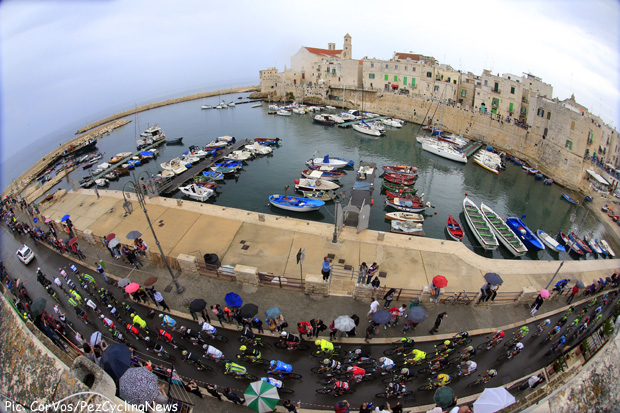 The withdrawal due to a fever of expected stage winner Marcel Kittel surprised everyone. Team Giant-Shimano coach, Marc Reef said: “We made the decision here before the start of the fourth stage that Marcel would not continue the race.”

“Two days ago, after the third stage he already indicated that he did not feel 100%. Yesterday morning he said that he felt better, but this morning at breakfast he had the same complaints and after a few check-ups with our team physician we saw that the fever had deteriorated and so we made the decision together that he should not continue.”

“It is a hard decision and a big loss for the team and a pity for Marcel. But we have to move on and with Luka [Mezgec] we have another strong sprinter on board. We will rebuild our positioning in the sprint train and keep challenging with Luka on the flats now.”

Marcel Kittel added: “I am very disappointed about leaving the Giro after such a strong start in good condition, but I do not feel healthy and I am not in the position to start the race in this condition. I want to thank my team for their support these past few days and wish them the best of luck for the rest of the race.”

More Rain!
The showers became a bit heavy and the Orice-GreenEDGE team led the peloton through the wet olive trees, the riders were more interested in keeping dry and there was even talk of shortening the stage. No one was interested in racing on the slippery roads and Katusha’s Luca Paolini seemed to be the spokesman for the peloton and he explained the situation to the race director and so all was quiet going into the last 80 kilometres.

After 39 kilometres the race hit the start of the circuit and Paolini had a puncture just as the pace started to lift. There had been less rain in Bari than at the start and it was looking like ‘proper’ racing was going to happen. The average speed had been over 35 kph for the first hour, so the race wasn’t too far behind schedule.

Orica-GreenEDGE took control of the race with five riders on the front with 8 laps to go with a visibly faster pace.

With 57.9 kilometres and 7 laps to go the pace dropped again as the corners were still a bit dodgy and Orica-GreenEDGE’s young jersey leader Luke Durbridge called time out and the peloton rolled through the feed zone. It was Alessandro Petacchi this time who spoke to the race director and then discussions carried on amongst the riders.

50 K’s to go
Orica again took to the front with 6 laps to go, but there was some disharmony in the bunch as many of the riders now felt it was safe to race and give the big crowd in Bari the spectacle they had come for, BMC’s Miguel Quinziato being one of the more vocal.

The decision had been taken that the time for the overall would be at the bell lap, there wouldn’t be any time bonuses and then the riders who want to race can go for it on the last lap, this lifted the speed again, but it was far from ‘full gas!’

Into the last 40 kilometres and Cannondale, Movistar, Trek and Lotto Belisol all moved forward which injected some speed into proceedings.

With 4 laps to go Cannondale came to the front to contest the intermediate sprint, although no one was sure if there was any time bonus, but there were points. Cannondale’s Elia Viviani was first over the line followed by Giacomo Nozzolo of Trek, this puts Viviani in the (virtual) Red jersey. Orica-GreenEDGE moved to the front again.

Luke Durbridge kept the pace high enough to discourage any break away attempts coming into the last 20 kilometres, but the other teams started to move their leaders forward in time for the GC count.

Nacer Bouhanni (FDJ.fr) needed a bike change with 12 kilometres to go and his team car was severely warned for pacing him back up, he and two team mates managed to tag on the end of the bunch with 9.2 kilometres to go. Over the line as the bell rang and everyone was together so there will be no change to the overall.

Orica were swamped and Sky’s Salvatore Puccio went up the road, but he maybe thought he was doing lead-out work and came back. He was pulled back by Cannondale for Viviani, but then just to prove the point; most of the Cannondale team and many of the lead riders slid to the ground on a big corner. This left Giant-Shimano with four riders on the front of around ten riders with a big gap coming into the last 2 kilometres.

Into the final straight and Tom Veelers was leading out his new Giant-Shimano sprint leader Luka Mezgec, but on the last bend Mezgec had gear problems and Veelers had to go for a long sprint. Nacer Bouhanni (FDJ.fr) slowly pulled Veelers back to pass him just before the line with Trek’s Giacomo Nizzolo on his wheel. 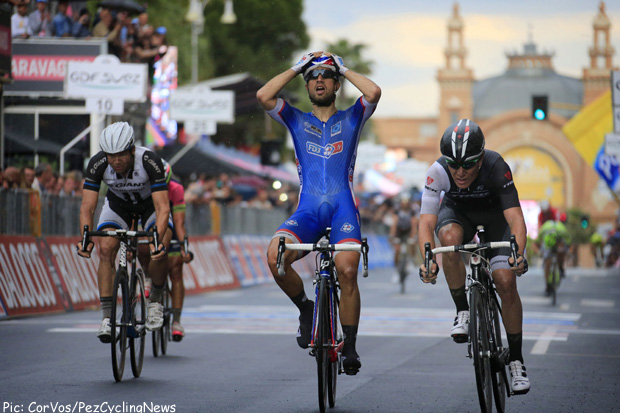 A strange old day in the saddle, but it was worth waiting the two hours for the last 10 minutes or so of slip sliding action.